One of the fundamental differences between Rally Raid racing and traditional Baja offroad racing is that in the evening before the next stage, you receive the race course in the form of a road book.  And the is exactly what is happening at the worlds biggest and toughest offroad race.  The Dakar Rally.
Here the road book for the following days stage is given to all competitors at the same time in the form of a paper book for the cars and trucks, and a paper roll for the motorcycle and ATV’s.
Next the navigator must look it over for hours and use different color highlighters to mark certain features.  A navigator may mark sections that require extra caution in red or pink, mark all kilometer readings in yellow.  Everyone has a different method but the goal is to be able to get the race car in the right direction without any mistakes.
Now the next step comes somewhat natural.  You are curious to see where you will end up racing tomorrow.   Is it all fesh fesh (silt)?  Tight rally roads, flat out beach sections, large dunes that go on for days?  The rally notes will give small clues but you have time on your hand so why not look on your phone on google earth and try to figure out what is ahead?
You may get to prerun on a computer screen whereas Baja the race course is given out weeks in advance as gps files.   Teams may spend weeks prerunning the race course time and time again to learn every line and every shortcut.   In Baja you may build yourself a rally book and some teams with rally background actual do that.   One well known to do just that is Armin Schwarz.
In Dakar the spirit of racing is the opposite.  The idea is that all competitors don’t get to prerun the course but instead navigate while racing.  Rally is not only about knowing how to go fast but also how to read the rally notes and make sense of them.  The team that drives the fastest while also not geting lost in the least amount of time wins at the end.
Racers and team owners are always looking for the best outcome at whatever the cost may be in todays Rally Raid racing.  One way to do that is to utilize “MapMen”.   This is a person or group of people that will aid the navigator in finding shortcuts or better lines in the few hours before a stage starts by looking at the road book and utilizing resources such as google earth, paper maps of the area and many other tricks.
When budget is not a factor a team may hire  MapMen that can with precision accuracy predict the upcoming stage by simply reading the road book.   This practice gives those teams with the biggest resources and the most colorful imagination on rule interpretation an advantage that many other teams despise.
We caught up with Dirk Von Zitzewitz, navigator of the #302 car of Geniel de Villiers after he expressed himself on instagram against ASOs sudden strict enforcement of the rules.

Skyler  Howes (73) on the other hand as a rookie during his first Dakar thinks its against the spirit of rally.

“Personally I feel like it takes the spirit of rally out of it. That’s why I like Rally so much is it comes down to who just is the most talented at navigating and riding. Not who does the most homework.
I think that people are trying to win so much that they are looking at any way to bend the rules. Which has always been the case in every sport…. but if it’s legal then all power to them for putting in that extra work… here in Dakar it’s cheating… but I’m pretty sure every major team has a map man, Kevin just had the misfortune of getting seen with his notes…
I think now that it is in the light, that the organization will do things to make it much harder for a map man to exist. I personally wish they didn’t exist. I like the level playing field. A rookie, non factory racer on an old worn out bike has the same opportunity to win as the factory, because there is so much more to rally than just who can go fast and has good equipment. Jonah Street proved that in a big way.”
This year ASO caught on to either the practice of MapMen or maybe enough competitors brought light to the practice.
After Stage 2 ASO inspected road books to find some teams had more notes hand written inside their official books that they handed out.
ASO announced a stronger enforcement of Rule 22P2.3 and 17P2.3
They are now checking road books after completion of each stage.  What they are looking for is additional information that aids in the navigation of that stage that was not given by ASO.  So highlighting given notes is ok, but once a team has notes on terrain features that can only come from a MapMan infractions will be handed out.
It will be interesting to see if the addition of widely available tools such as Google Earth will prohibit the use of MapMen.  At the very least ASO drew a line in the sand and more clearly defined their interpretation of rules.
We heard rumors of an electronic road book that allows for last minute course changes to be distributed fast and would allow the race promoter to shorten the amount of time a competitor can study the course beforehand.  An unknown course is a key element of Rally racing and distinguishes it from many other forms of racing. 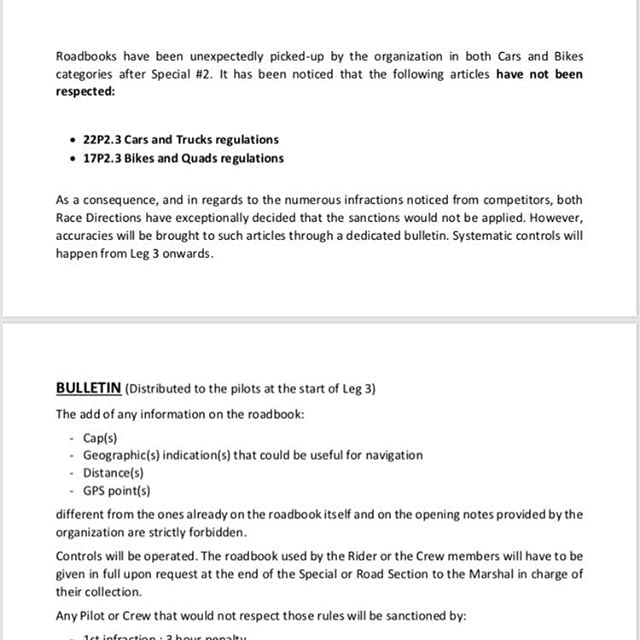 Follow our forums discussion on the topic of mapmen

K
Klaus Rasch
That’s why Malle Moto will be, for me, the truest articulation of the Rally. These blokes don’t get time enough to get the sleep they need, let alone trawl through google earth.....they just ride and navigate, and scanner their own bikes.
Legends.