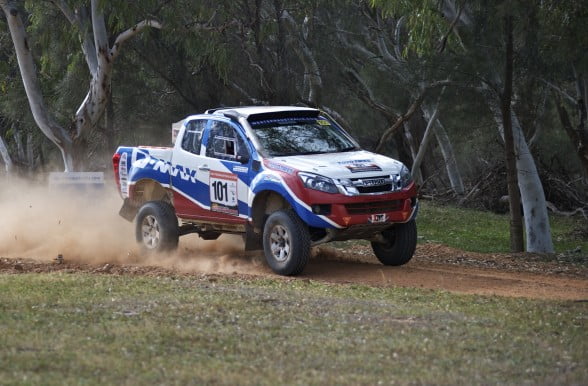 Garland and long-time navigator Harry Suzuki started today in fourth place and had moved into third position when a tight corner and a gate post brought them unstuck, 15km from the end of the day’s first stage (230km), out from Kalbarri in northern Western Australia.

They clipped the post, smashing the left rear wheel, bending the diff housing and breaking a suspension point on the chassis.

With no time for a real repair before the next stage of 260km, and their Isuzu D-MAX due to be shipped out in 10 day’s time for the 2013 Dakar Rally, the Isuzu Motorsports team were forced to confront the realisation they could not risk continuing. It’s a decision that has left them deeply disappointed.

“This was my 16th Safari and it’s only the second time I haven’t finished,” said a clearly shattered Garland, after towing his brand-new racing ute into the overnight bivouac at Carnarvon.

“I’m shattered for the guys on my team, because they have done such an amazing job with the car. It was me who made the mistake. I got caught out on a slippery corner and dragged into a gate post. It’s the sort of incident that happens 100 times in this game – usually without a drama – but not this time.

“Normally we’d try to fix it and keep going, but the sad fact is that Dakar has to be the priority. We couldn’t risk a half-repair job and end up doing more damage.

“Obviously it’s disappointing, beyond disappointing. We love this event and we wanted a good result. At this point, we’re thinking we’ll do a full repair job and then change the car over to Dakar-spec as much as we can and then we might run a stage as a test. That might help the organisers too, if we can do that, but we’ll work all that out tonight.”

The Sydney-based Isuzu Motorsports duo had been running neck-and-neck with the Venezuelan crew Nunzio Coffaro and Daniel Meneses in a 2012 Toyota Hi-Lux, when the international crew had some mechanical problems and dropped back. Garland says he and Suzuki were just discussing how well the D-MAX ute was running, and how happy they were with its performance, when the situation changed.

“I saw this blue gate behind the trees that we had to go around, but as we approached it, the corner was tighter than I thought so I slid out a bit wider at the last minute and then we got pulled in and clipped the bottom of the fence post.

“We did a bit of bush mechanic work to get us through to the service point, but we only had 20 minutes there before we were due to go out on the next stage, which was about 260km.

“We knew it would take at least an hour to get it fixed to the point of carrying on and we would have lost a heap of time anyway, which would have put us out of contention, unless other crews got themselves into trouble. So we had a bit of a team discussion about it, and decided we had to withdraw.”

The five-time Safari winner has come back into competition after an enforced lay-off of more than a year, the result of fracturing a vertebra during the 2011 Dakar Rally, and then having a heart attack while on holiday two months later. He had five bypasses done by the specialist team at Melbourne’s MonashHeart.

He and Suzuki were tackling the 2012 Safari in preparation for the 2013 Dakar, which will run through Chile, Argentina and Peru next January. The pair’s best result in the Safari of recent years was third outright in 2010 – and first diesel – in their 2011 Dakar-spec D-MAX.

The official results for the stage show Garland and Suzuki in fifth outright after two days of competition. The 2012 Australasian Safari ends in Geraldton on Saturday after the crews cover around 3000km.