Tom Morris was recently hired by Cal Wells III to restore the famous 015 Ivan “Ironman” Stewart Trophy Truck.  Since this is my favorite truck of all time I think it deserves more than just our usual vehicle feature.  We sat down with Tom for a Q&A about his involvement with PPI and to get more details about this truck and the others that PPI built over the years.

What was your involvement in the PPI race program?
I served as Special Projects Manager as well as Off Road Program Manager at PPI from the beginning of the Toyota program in October 1982 thru closing down PPI west coast facility in 2001. I was involved with ever aspect of every vehicle built at PPI, from concept thru every stage of manufactureing and then racing. 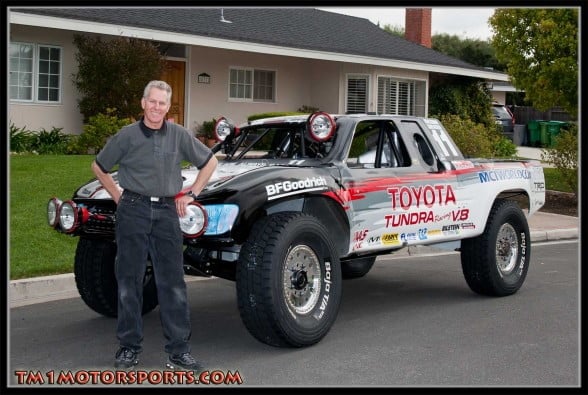 Tell us why you were chosen to restore the truck and what the plans are for it now?
I was the only person who knew every aspect and part of 015 inside and out. The PPI 015 Trophy Truck will now go onto RK Collection in North Carolina to be sold to a hopeful new proud owner.

Did you run into any problems during the restoration?
The biggest challenge was locating all the parts to make the new race engine complete and better than new again. There were also some challenges locating the vendors and parts that were used back in 2000 to find old part numbers and a supplier that still had access to them. In one particular seal for the steering, PPI was the last customer for it back in 1999. 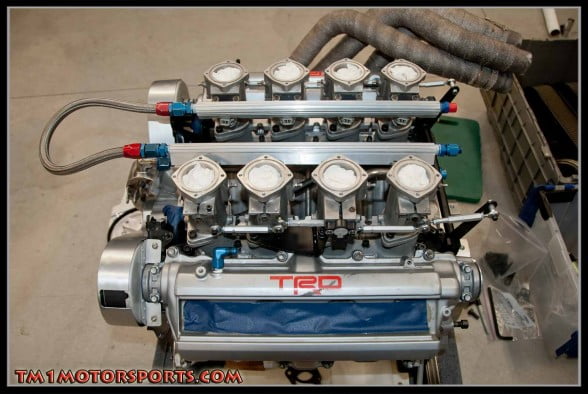 Tell us about the engine:
The first V8 engine that was used was from a first generation 1994 or so Lexus LS 400, which we were able to get a complete take out engine from the warranty department at Toyota. This was then given to TRD to see what could be done to make it a viable race engine. Larry Slutter and the group at TRD Special Projects made it happen. Bruce Nogrady put it all together. This was an all aluminum engine that was just over 300 cubic inches in race trim. TRD was devoted to making this enging and the race program a success. Failure was not an option.  Every internal part had to be special made for this as well as oil pan, flywheel, crank damper, intake system, etc. The heads were welded up and totally reworked for the needed increased airflow. Bore and stroke was stretched to the maximum. The V8 weighed about the same as the V6 engine.
The very first V8 engine that was made from the junk yard engine won overall its first time out at the 1997 Score Baja 500.

Why does the truck run a single shock per wheel?  Who built them? Are they internal bypass?  Was there ever thoughts to upgrade to a bypass and coil-over per wheel?
One shock per wheel was used to keep the vehicle as simple as possible (yeah, right) as well as saving weight. PPI built the shocks from scratch and they used a special digressive style piston and valving design from a Bilstein 699 piston to provide velocity sensitive valving. The shocks were also internal position sensitive that could be adjusted for compression and rebound. Although the internal bypass coil over shock was a pain to tune, as you could only get a couple of changes done in a day, we never really considered going away from it due to the added weight and size it would add to the compact vehicle. 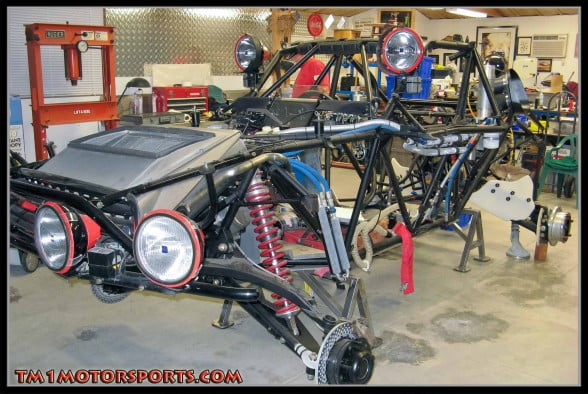 What do you think was the strongest link in the race program and the weakest?
The strongest link in the  PPI program was the sum of all the hard working people and their dedication to a winning program. On the opposite side, the weakest link was the fact that for so long we had to compete with a much smaller engine that most of out tough competitors. This meant that the engine was always performing at the ragged edge of reliability by reving its guts out. This all changed when we got the V8 engine in 1997.

What’s the story of chassis 001 – 014?
The first two 1983 Toyota MTEG short course trucks with 4 cylinder hi bred race engines, never received chassis numbers. In 1984 when the next run of new larger body style Toyota race trucks using the same basic race engines as before, only now fitted with side draft calibrators instead of the 1983 downdrafts were built we decided to give them number designations to make tracking them easier. We were building 4 new trucks all at the same time as well as spare parts. This also meant that when you made a mistake, there was lots to fix or scrap in the trash. So 001 and 2 were the the new 1984 desert trucks and 003 and 4 were the new 1984 MTEG short course trucks. 005 was a new Chevy truck for Frank “Scoop” Vessels that set a new standard in design for Class 8. New faster and lighter weight short course Toyota trucks were needed so 006 and 7 were built. I think 008 and 9 were Chevy trucks that PPI built for Joe MacPherson’s race programs. 010 was the new desert truck that set a new standard in desert racing and won the majority of the races that it competed in. 010 served PPI well and was retired at the end of the 1993 season after winning the Score Baja 1000 overall as well as beating all the motorcycles. Oddly enough 015 was built and testing before the 1993 Baja 1000 and was going to be the choice to race over 010. Smarter minds prevailed and 010 was chosen to compete due to its reliable track record and available spare parts. This turned out to be the right choice for as 015 went into service at the start of the 1994 season, there were many reliability issues that had to be worked out and once done, 015 was a very good weapon against the competition. The big V8 trophy Trucks worked us hard with the V6 engine and with several month pleading with Toyota and TRD the V8 was ok’d and we went to work fitting it in 015. Sorry, back to the missing numbers. 011, 012 and 014 were new Toyota MTEG short course trucks with a new V6 engine. The 013 chassis number was never used as somewhere in the PPI organization someone was a little superstitious. 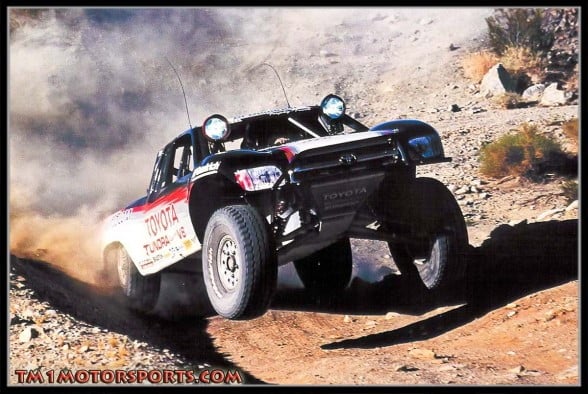 How competitive do you think this truck would be today?
There are several races that I am confident that 015 would be extremely competitive at. Keep in mind that back in the 90’s there were not as many vehicles with the tall tires, so most of the ruts were not as deep. 015 would not do well at a San Felipe 250 or deep ditch jamber, tons of deep whop-de-doos races. It would however do very well at several of the BITD races and Score Baja 500 and 1000 races where technical skills and decent  condition windy roads prevail.

What would it cost to build this truck today?
Hard to say. The cost back then to build 015 to where it won its first race was well over a million dollars.

What is the top speed of the truck?
With the V8 engine 015 could run well over 135 mph in the dirt. This was quite an improvement over the V6 engine, which maxxed out at around 90 mph…with a tail wind, going down hill. 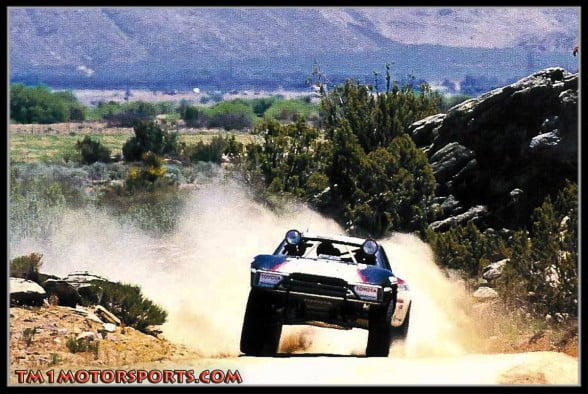 Does the Pflueger independent rear truck use any of the ideas/designs from this truck?
No, Alan’s truck that Trevor Harris designed is more akin to 010 in design. By this I mean more of a conventional transmission that bolts to the back of the mid-engine, which then drives a hi-bred differential by way of a very short drive connection. This saves on making a very expensive tranaxle assembly like 015 uses. In all fairness Alan’s truck is a very potent vehicle compared to what 010 was. The jury is still out on the 015 competition side. Time will tell as the Pflueger TT get’s sorted out here soon and goes out racing.

What do you believe to be the single most important development in the evolution of the Trophy Trucks?
There is no single part to the equasion. You need to take into account all of the development that has been done by a wide combination of builders and teams and then ideas stollen, copied and improved upon….over and over. Tires have moved forward into larger, more reliable sizes by several manufacturers. Add into this the advent of the newer shock designs of the last 10 or so years along with a vast array of better designed, hi quality race parts that the common man can now go out and buy off the shelf. Many years back you would have to make all your own stuff. Example: buy a SPD TT a few years back and go win. Then you go buy a new Geiser and go win. Others will come along and do the same, such Jimco’s new additions to the marketplace. In years past, you had to hire real smart people and have a good inhouse race shop facility to get a winning race car built. Now anyone with $$$$ and a little desire (talent optional) can race a competitive vehicle.

Curtis Guise
Awesome feature, but doesn't anyone proofread these articles before they get published? The lack of professionalism in the writing is a bit of a let-down.
does anyone remember the Ivan the ironman off road video game from the arcade?
is it me or does that truck have wild toe change as the wheels go up? There is no mistaking it in the photo, the right front wheel is heading for denmark
MAN... NO DOUBT THIS HAS BEING THE BEST TROPHY TRUCK EVER AND THE BEST TEAM TOO. WE MISS IT SOOOO MUCH IN BAJA. IT IS NO THE SAME ANYMORE. AFTER THE BAJA 2000 EVERYTHING CHANGED THE BIG FACTORY TRAMS LEFT, SAD. I HOPE SOME THEY THE BIG NAMES WILL COME BACK TO BAJA.
I spent some time with this truck while it was here in Charlotte. It was a giant step in the evolution of all things TT and it's record speaks for itself. I watched the front and rear end cycle, I would say it had a bent control arm in the picture, cause it did a perfect cycle with no camber or toe issues when I watched it.
TOYOTA VERY SWEET TRUCK
I question them putting a bent control arm on a 100 percent race prep, it is great to see it out again but very noticable in the full bump shot
Thank you for putting this together, AWESOME!
Like Curtis, my favorite truck of all time!
I feel a little melancholic, I was hoping an Ivan Stewart´s return to Desert Racing.
Looking the pictures over I feel this is a true race-car. True in the sense that every single item seem thought out and on purpose rather then monkey-see monkey-do. It resembles the detail of a WRC or other "upper level" race car. It's something you don't see much in US off-road racing. Maybe it is over engineered but then the trophies don't lie.
Klaus, it's a work of art. The care and precision in every part is there to see.

Does anyone know what the retractable windscreen is for? Is it a HUD (laughable on any other car but this one) or just to deflect wind at high speed.

OzMikeH - The windscreen is to protect Ivan's face from roost / rocks / debris. Ivan had the choice or retracting it when he was running in clean air or deploy it as needed. It was on a spring loaded T-handle so it could be deployed, locked into position and quickly retracted by pushing a button in th center of the T-handle. Ivan ran open face helmets so it was a necessary feature to have but as you can see by the pics, as simple as it is, it was thought out, engineered and built in only a way that PPI could do.