At next week’s 6th annual NORRA General Tire Mexican 1000 rally, Garner’s memory and lasting impact to Baja desert racing will be remembered via a special tribute being staged by event organizers and friends of the Garner family. In addition to a special video screening and remarks at the rally’s “Walker Evans Racing Driver’s Meeting” held in Ensenada, Baja, Mexico next Saturday evening, April 25th, all of the unique NORRA Vintage Category vehicles will wear specially created “James Garner Memorial Rally” decals after passing the Mexican 1000’s technical inspection.

The Garner family is also making sure that very rare pieces of James Garner’s racing memorabilia will be on hand and displayed for NORRA teams and off-road enthusiasts to enjoy. 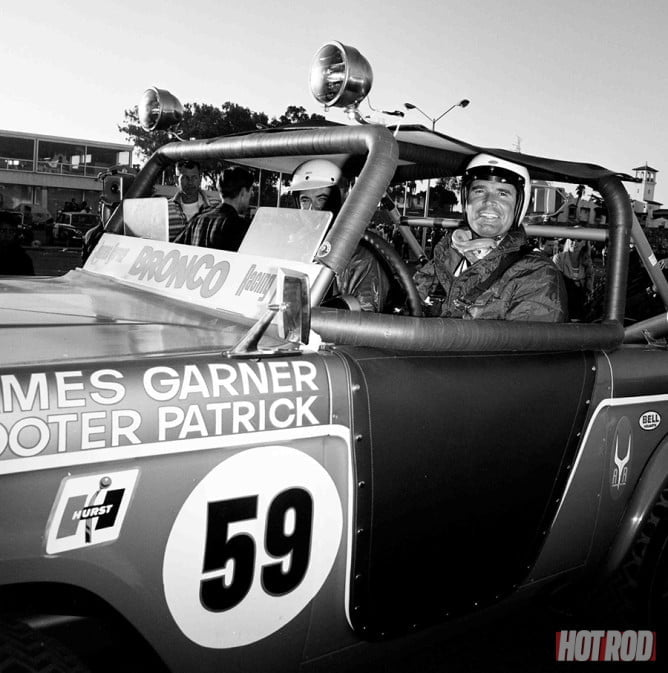 An avid racing enthusiast who got hooked on the sport filming the classic Formula 1 film “Grand Prix,” Garner’s first off-road race was in a Porsche 356-powered Meyers Manx fiberglass dune buggy at the 1968 NORRA Stardust 7-11 race in Las Vegas, a vehicle owned by Fleetwood Enterprises (think motorhomes) founders John and Donna Crean. It was co-driven in that event by longtime Garner sidekick and sport car racer Scooter Patrick.

As part of next weekend’s festivities, the newly restored car, now owned by Fred and Ginny Willert of El Cajon, Calif., will make its first public debut since the late 1980s – first at Friday night’s NORRA function at Ensenada’s Horsepower Ranch, and then in the “General Tire Vintage Round-Up” at downtown’s Riviera Convention Center on Saturday, April 25th.

While Garner and co-driver Scooter Patrick did not complete their maiden outing, by that year’s NORRA Mexican 1000 they had moved on to Bill Stroppe’s Ford Bronco team and found themselves teammates with none other than Parnelli Jones.

“The first time I got acquainted with Jim was in 1968 when he raced in the Baja 1000 in Mexico with Scooter Patrick,” Parnelli Jones told RACER Magazine. “The Baja 1000 was a really big deal back then, big enough to be covered by ABC’s ‘Wide World of Sports.’ Jim was a hell of a driver, a competitor; most people don’t remember that and that he raced in a lot of different types of cars over the years. He truly was a ‘man’s man.” 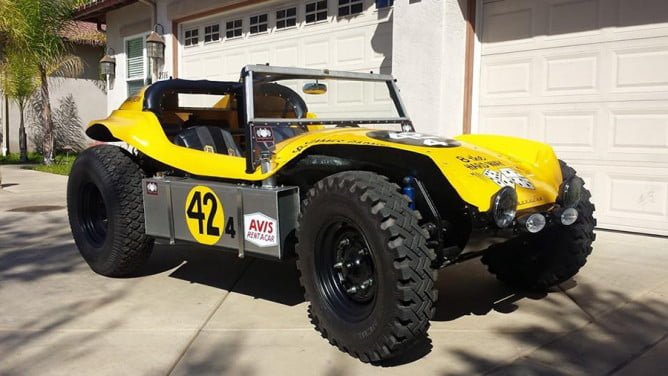 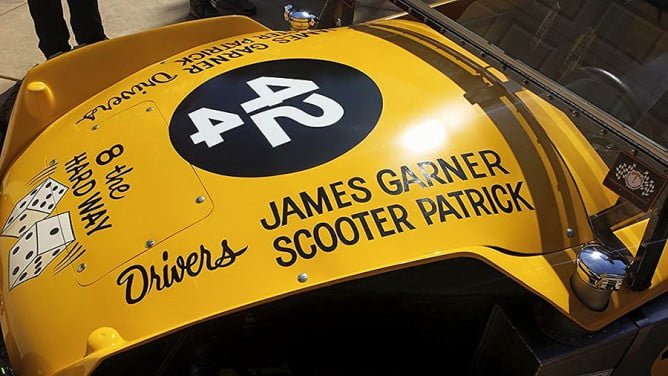 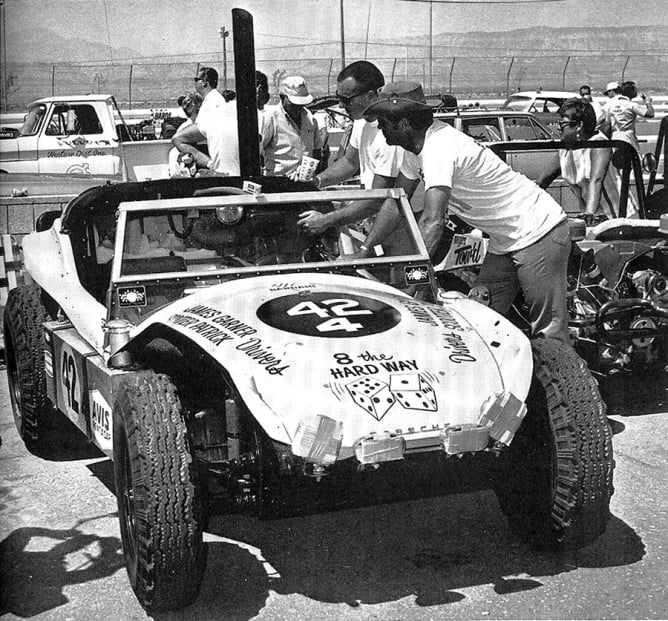 This newly restored Meyers Manx fiberglass dune buggy race car was raced in the 1968 NORRA “Stardust 7-11” in Las Vegas by James Garner (top, right) and Scooter Patrick (at left). Powered by a rare Porsche 356 industrial engine, the custom Manx didn’t finish the race due to mechanical woes. Having undergone a massive restoration, the Willert family will debut the car at this weekend’s NORRA Mexican 1000 in Ensenada, Mexico.

Garner would later shift alliances to Vic Hickey, who had designed and constructed the two “Baja Boot” cars eventually acquired by fellow off-road racer Steve McQueen. The ever-innovative Hickey would build several off-road versions of Garner’s famous Oldsmobile 442s, along with the tube-framed “Oldsmobile Banshee” restored and raced at the modern-era Mexican 1000 several times by the John Swift family.

The actor’s famous smile and very American good looks were featured in black and white pictures taken by Hot Rod magazine photographers in that era. They are an off-road racing treasure. One of these images, taken just before he took the green flag for that 1968 Mexican 1000, was the inspiration behind young artist Chelsea Davidson’s painted recreation. That artwork will not only be unveiled on Friday night on the walls of Ensenada’s legendary Horsepower Ranch, but will also serve as the centerpiece for the James Garner tribute decals.

Off-road racing has been blessed to have both Garner and McQueen – two absolute Hollywood A-list superstars – among its roster of famous personalities. Thanks primarily to the Mexican/Baja 1000s and the Mint 400 the sport has seen the influx of other cross-over superstars like Paul Newman and Patrick Dempsey.

Fittingly, in 1978 Garner was inducted into the inaugural class of the Off-Road Motorsports Hall of Fame (ORMHOF) that was the brainchild of NORRA founder Ed Pearlman.

“He was kind of close with my father, they may have gone out a few times together,” recalls son and NORRA President Mike Pearlman. “Jim Garner was always happy, he never had a mad look on his face. The camera really loved him too. NORRA is proud to run the ‘2015 Mexican 1000 James Garner Memorial Rally’ for our Vintage Categories in his honor.” 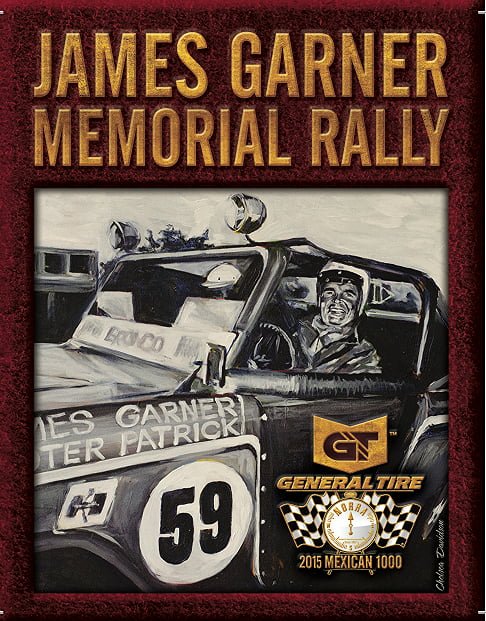 Young Washington artist Chelsea Davidson’s talents created this unique painting of James Garner based upon the original Hot Rod magazine image shown above. The artwork was the vision of Horsepower Ranch founder Todd Clement, who will debut the painting this Friday evening at the facility’s legendary Carerra Cantina. 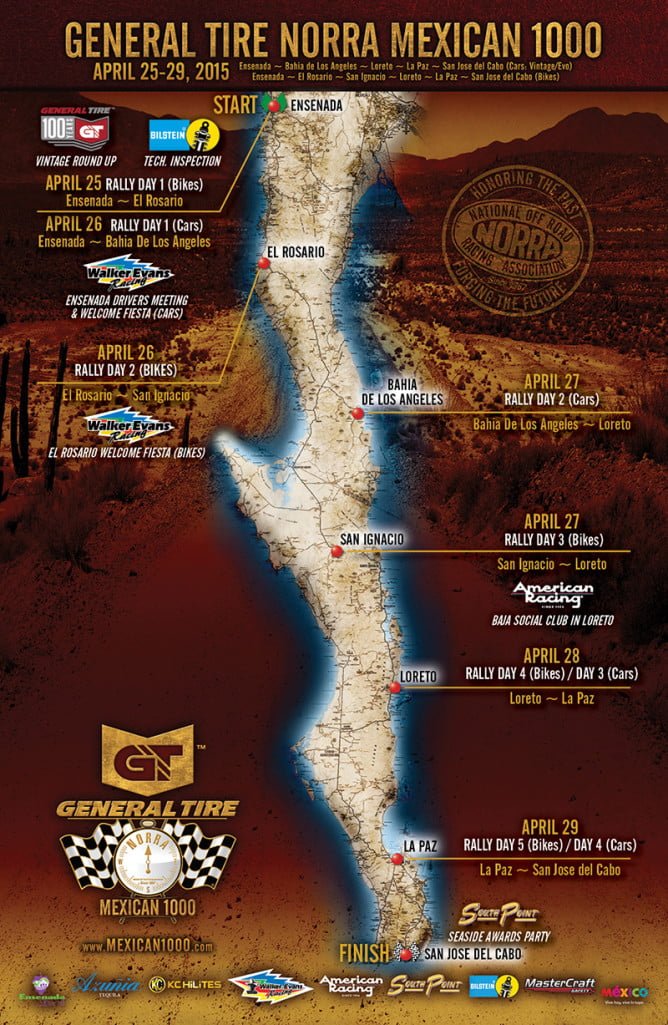