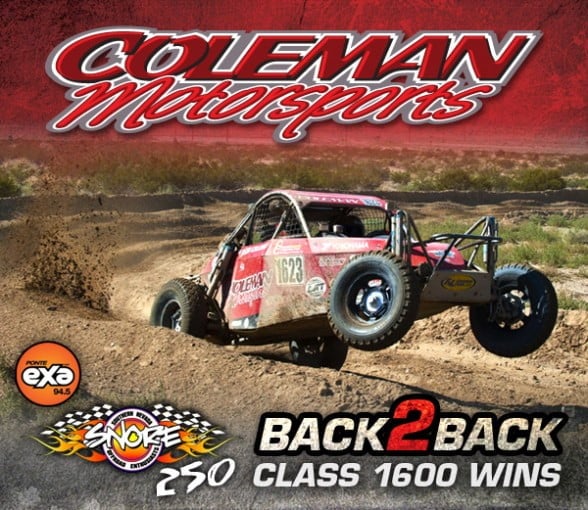 Driver Jason Coleman and his Coleman Motorsports team won their second race in a row at the EXA 94.5 FM, SNORE 250 race in Primm, Nevada. The team was fresh off their victory at the SNORE, KC Hilites, Midnight Special in Lucerne Valley, Ca. where the team ran four, 73 mile desert laps to take the victory. At the SNORE 250, the team switched to a short course type set-up to run the event’s seven, 8 mile laps on Saturday and again on Sunday to take the win.

“We had a fierce battle with Blaine Conrad all weekend,” said Jason Coleman about their race on Saturday, “We were both driving on the edge of control going up on two wheels in almost every corner. Either one of us could have crashed multiple times; you had to drive perfect. We won on Saturday by 25 seconds so we had some time in the bank when we started on Sunday.” The 1600 class has strict rules that keep the cars as close to equal as possible. It may not sound like a significant amount of time but the 25 seconds Jason carved out on Saturday gave him a huge advantage. 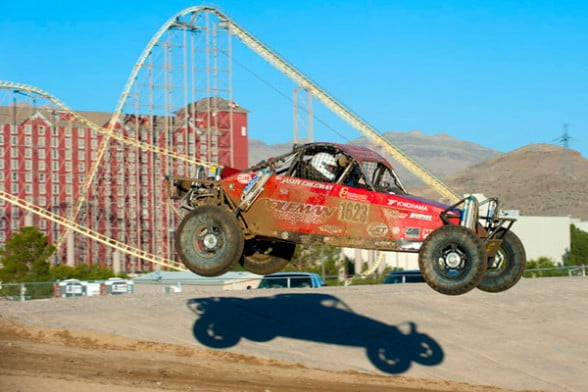 Sunday’s race would be much tougher as the course was chewed up with square edged bumps and big holes. “SNORE did a great job keeping the course watered and to their credit they left it alone after Saturday’s racing,” said Jason, “I like a rougher course. My Wiks Racing Engine gives me the horsepower to get up on top of the bumps and my King Shocks soak up the big hits helping me maintain my speed. Of course, Blaine runs a Wiks motor too.” Jason said Laughing.

Jason’s run on Sunday was not without some tense moments. Soon after the start, he experienced some trouble with his shifter. Just one missed shift can cost a racer 10 seconds, enough to lose a race. He quickly changed his shifting technique to overcome the balky shifter. He was running a safe pace conceding some time but maintaining his lead over Conrad. With two laps to go, Jason put the hammer down making up the time he had lost and building on his lead taking the win for the weekend by 29 seconds. 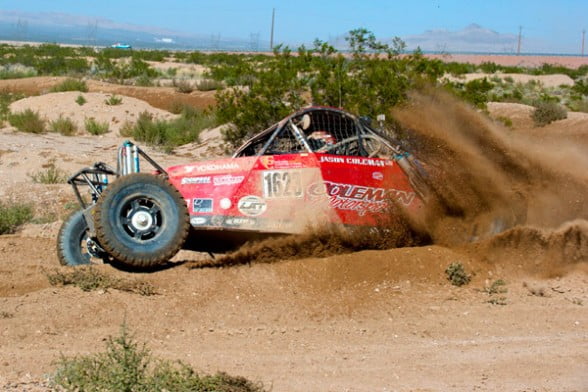 “I love this class,” said Jason, “We pound these cars so hard and drive so close to the edge, it’s so much fun. Even if I move up to a faster class I’ll keep my car and still race in 1600.” The decisive win puts the Coleman Motorsports team farther ahead in the class 1600 championship standings and puts them in a tight battle for the overall SNORE points championship. It all comes down to the final race of the season. “Rage at the River” will be held in Laughlin, Nevada December 7-9. Make your plans now to attend; it’s going to be another epic battle!