For the second time in his off-road career, Jason Scherer climbed high on the podium at the 2018 Nitto King of the Hammers Powered by OPTIMA Batteries in Johnson Valley, California. Scherer claimed his first crown in 2009 and is now one of five drivers to win the event more than once. In a post interview, Scherer explained that while KOH used to be a race of attrition, in 2018 it was a head-to-head race from start to finish. 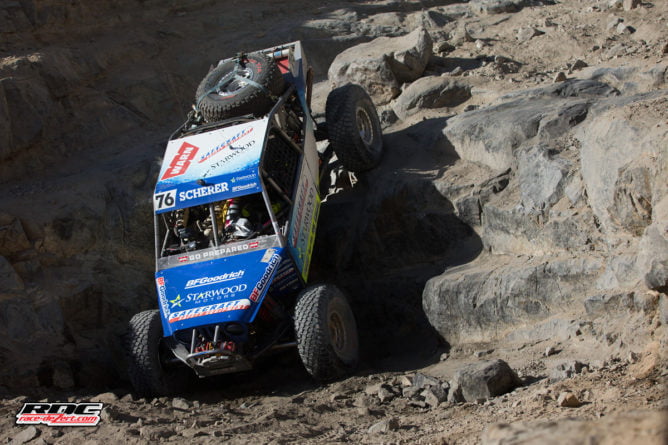 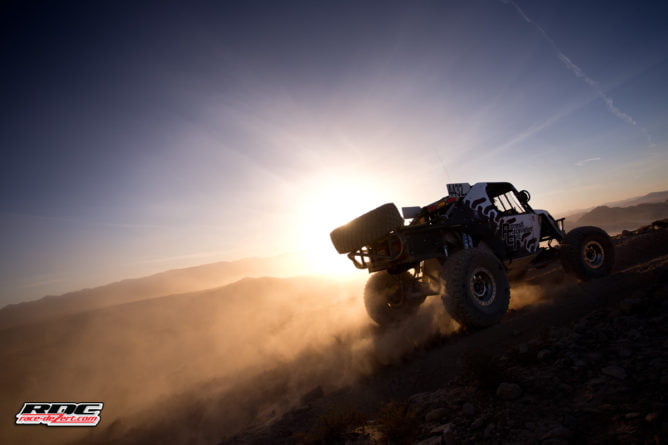 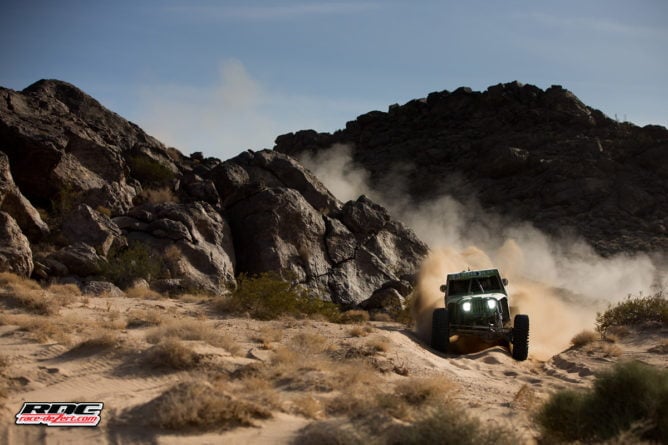 And what a race it was.

For almost the entire 202 miles, Scherer battled with former King, Randy Slawson. The two went back and forth across the dry and dusty Mojave Desert and through the Hammer’s infamous rock climbs like Jackhammer and Chocolate Thunder. “Randy and I were mixing it up,” said Scherer, who swapped leads with Slawson on Backdoor and Outer Limits. “It’s easy to reel someone in in the rocks because you’re hunting. He (Randy) got up behind us on Spooners, though, and we let him go and then we passed him. But that’s racing, and we had fun and it was clean. Then he drove over our car and I was like, ‘it’s on brother, it’s on’.” 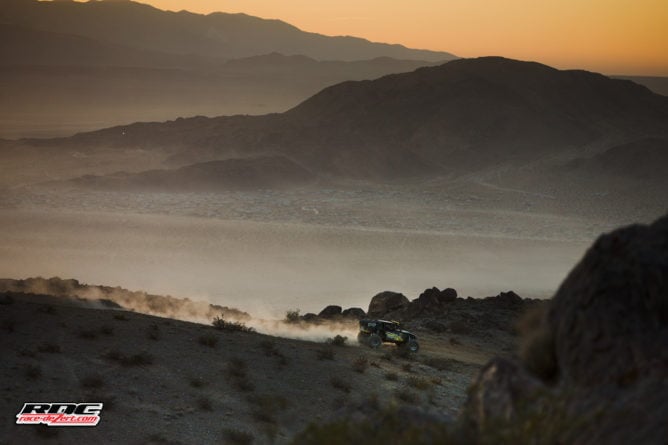 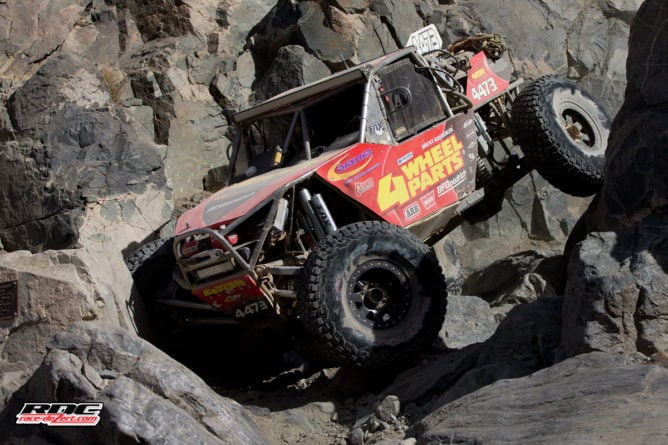 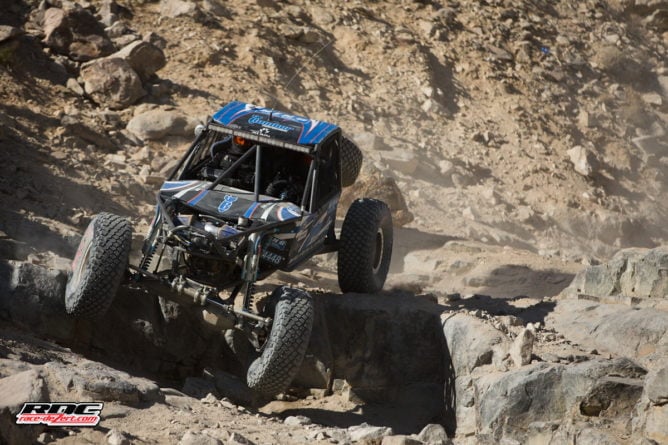 As Slawson streaked across the Melville dry lake bed just miles from the finish, his car suddenly died and coasted to a stop, giving Scherer his second King of the Hammers crown.

Trailing behind Scherer by 12 minutes in second place was two-time winner Erik Miller who finished the course in seven hours and 20 minutes. While Scherer battled with Slawson most of the race, Miller went back and forth with Wayland Campbell throughout the day. Overall it was a rough day for Miller, though, who expressed his exhaustion in the finish. “We pushed ourselves to the limit all day,” said Miller. “I woke up feeling like hell and battled that all day. It was a bad luck kind of day. I’m just grateful to be here. If I was in a single seater car today like Wayland or Levi, I don’t think I could have done it.” 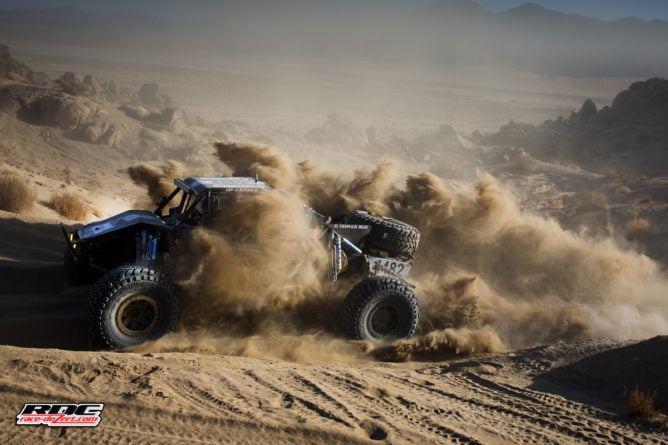 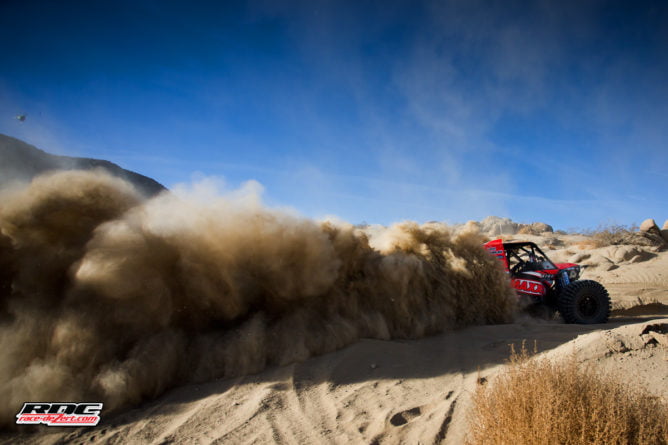 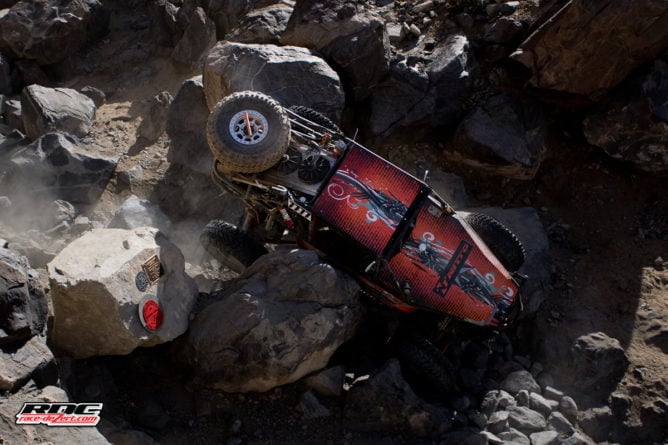 Rounding out the podium in third was the youngest driver to finish in the top ten, Wayland Campbell, age 21, from Gilbert, Arizona. Campbell was the only driver on the podium to solo the race and has been quick to prove himself in the ULTRA4 world. He won the ULTRA4 series in 2017, and he now has two podiums at KOH. He finished second in 2017 behind his father Shannon who is the only three-time winner. 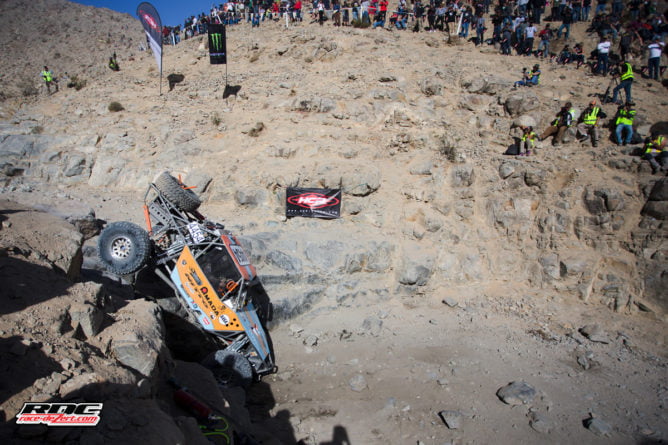 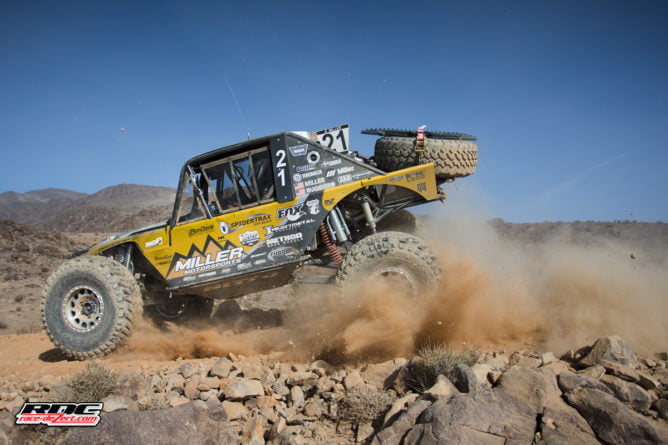 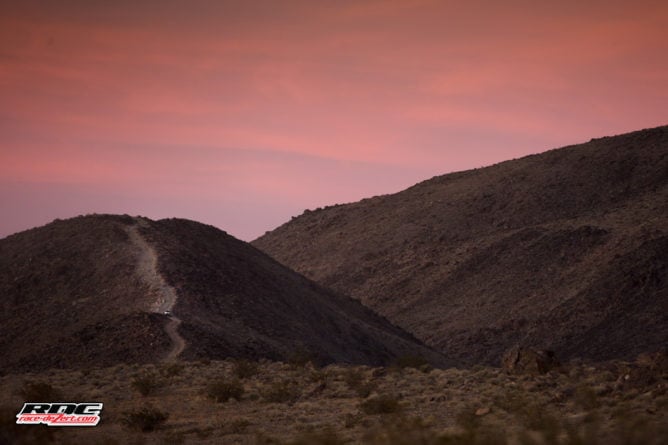 “I just tried to catch everyone all day,” says Wayland. “I couldn’t see anyone, I just heard chatter on the radio about where people were at and then I would try and go faster.” 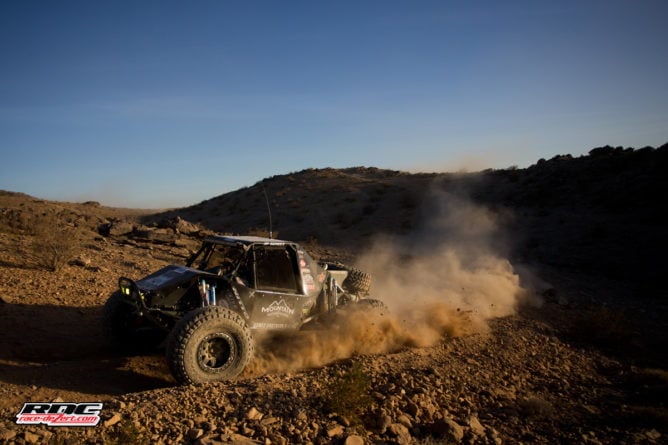 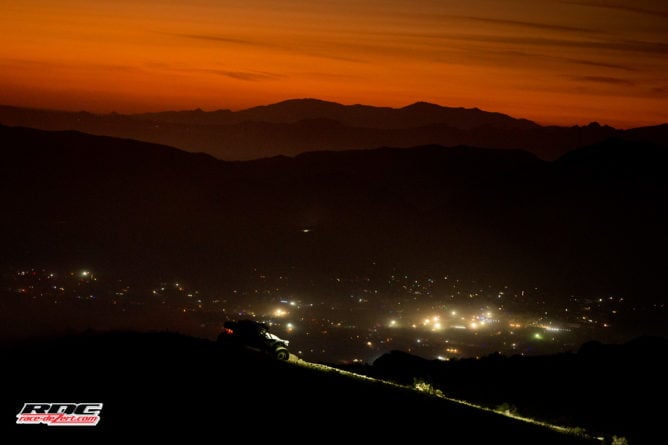 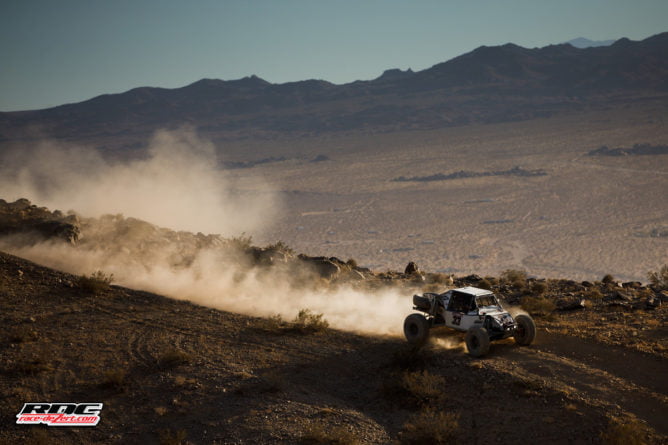 Winner Quotes
Jason Scherer: “We had the raw speed in the desert. We were trying to save it all the time in the rocks and that’s the balance and that’s the part that’s tricky. We fixed the transfer case in the car, but we never changed a tire. We didn’t have to stop for anything but fuel. It was flawless.”

Jason Scherer: “It’s a changing day. You go fast in the desert but not so fast that you break the car. Our car was working good and we got our suspension right. It wasn’t hard to drive the car so you could focus on the terrain, there are some huge G-outs, it was an interesting thing to go back to the rocks and have to find that pace. You’re hot and sweaty in the rocks and then you go out to the desert and everything is great and then you have to go back to the rocks.

Notes
– 102 drivers started the race but only 29 finished during the allotted 14-hour time frame.
– Six former Kings took the start line in 2018 and all but Randy Slawson finished the race. Slawson actually led much of the race before suffering a mechanical just miles from the finish. All the other Kings finished in the top 10, proving that experience is key at the Hammers: Jason Scherer (1st); Erik Miller (2nd); Shannon Campbell (6th), Loren Healy (7th).
– With the exception of JR Reynolds, who won the first Hammers in 2007, all former Kings raced in 2018. All who competed on Friday now have two wins, except Shannon Campbell who has three.
– Jason Scherer has competed both with and without a co-driver throughout the years. Every time he’s competed with a co-driver, though, it’s been Jason Berger from Truckee, California. Berger was co-driver for Scherer when he won in 2009.

Talking Points
Jason Scherer #76: 1st Place
“Randy and I were mixing it up going back and forth, you probably saw the one at the bottom of Backdoor that happened and then we went back and forth on Outer Limits. It’s easy to reel someone in in the rocks because you’re hunting. He (Randy) got up behind us Spooners and we let him go and then we passed him, but that’s racing and we had fun and it was clean. Then he drove over our car and I was like, ‘it’s on brother, it’s on’.

“It’s really crazy how many people have won it twice and one guy has done it three times, that’s why they are the best.”

“Put yourself with the right people and the right things will happen.”

Eric Miller #21 – 2nd Place
“It’s bitter sweet. We built this car all last month pushed it hard to get it here. We pushed ourselves to the limit all day. I woke up feeling like hell and battled that all day. It was a bad luck kind of day. I’m just grateful to be here. If I was in a single seater car today like Wayland or Levi, I don’t think I could have done it. It didn’t like one of those good Johnson Valley days. I pushed it as hard as I could but it felt like everything was fighting us. The car beat me up. It was a rough time. I pushed it for everything I had and I didn’t leave much out there.

–Says he battled with Levi and Wayland

Wayland Campbell #3 – 3rd Place
“It’s been a rough one and I’m glad to be out the car. One of the belts has been hitting my sternum and all over I hurt pretty bad. I just tried to catch everyone. I couldn’t see anyone, I just head chatter on the radio about where people were at and then I would try and got faster. Eric Miller got hung up at one point and I saw another line and took it. Then he was right back up on me, and he got me around me in the pits. The trails have changed significantly over the course of the last few days, thank you god we have 40-inch tires.”

Loren Healy
“It’s always a good day when you finish before the sun goes down in the Hammers. We had a good car and pace but I landed hard and took out the read drive shaft and we broke something in the transfer case so I ran two laps in front wheel drive other than the rocks in low range.”

“Outer Limits was probably the hardest part of the day, but this car is amazing. I need to win in this car before I bring out a new car. This car works well here, and I want to get a win in it, now I have to hang on to it for the triple crown.”