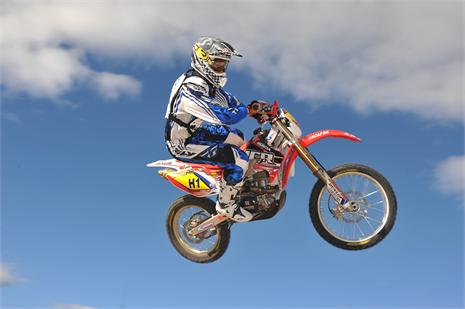 29 Palms, CA was the site of the 38th annual Hilltoppers MC Grand Prix and nobody could hold back the JCR boys as they cleaned house in every class they entered. The Hilltoppers MC is one of the oldest clubs around and puts on one of the highest speed races of the AMA Big 6 Grand Prix series. They do a fantastic job of prepping the course between races, keeping it fresh and fast for the racers. The course was a speedy 8 miles in length, with high speed graded desert trails and a small twisty MX track. Lap times for the top racers were around 11 minutes and 30 seconds. For Colton Udall the day started off with a solid win in the unclassified event. Leading wire to wire having little difficulty taking the win. Next up, was the HWT open race. JCR teammates lead the pack, with Timmy Weigand leading Colton most of the race. Colton managed to pass Timmy late in the race only to make an error in a turn and let Timmy by for the win. The third and final race for the JCR squad was the 4-stroke event. The start was almost a duplicate of the previous race with the two JCR racers rocketing to the front of the pack, stretching out a sizable lead on their twin, Eric Siraton built Honda CRF450X machines. Colton would make the pass stick this time, taking the win over Timmy Weigand. Sunday’s 1.5 hour Pro race would prove to be a race of speed and strategy as the 5 top racers rode nose to tail for the first 45 minutes with Timmy Weigand leading most of the laps. A strategized early pit proved to be a determining factor for the second half of the race, as the racers swapped positions for the lead multiple times. In the end JCR’s Colton Udall would prevail as the overall winner, with Timmy Weigand finishing a solid 3rd to back up the JCR/Honda sweep of the weekend, going 4 for 4 on their mighty, Honda CRF450X’s.

“Wow! What an outstanding weekend we had in 29 Palms. The Hilltoppers MC did a fine job keeping the course prepped and watered. Eric and Mitch did a great job keeping the race bikes in top form. It was great to see Timmy come back so quick from his crash in San Felipe and be competitive and Colton winning 3 races out of 4. It was a great weekend. Big thanks to American Honda, Dunlop, Lucas Oil, Truth MX, General tires and all our great sponsors.”
— Johnny Campbell