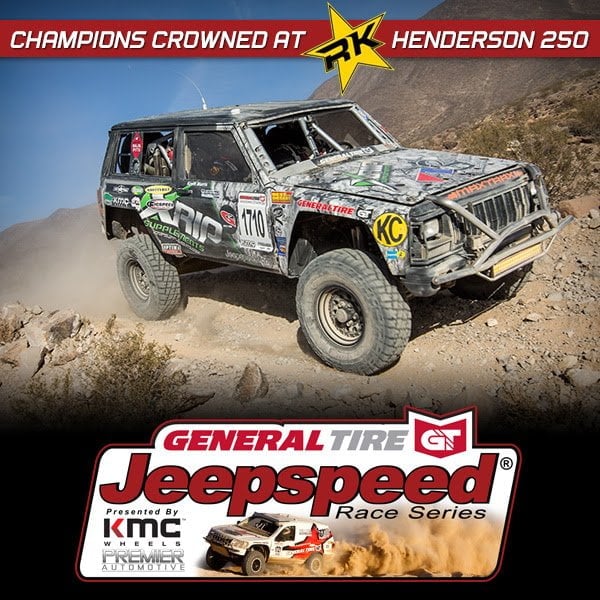 Jeepspeed Championship Battles Goes Down To The Wire At Henderson 250

Stiff competition in Jeepspeed Cup and Jeepspeed Challenge classes had season long points titles coming down to the wire in the General Tire Jeepspeed Racing series presented by KMC Wheels and Premiere Automotive. The final event was held at the Best In The Desert series Henderson 250 race in Henderson, Nevada. Rock Krawler Racing Developments sponsored the 2015 Jeepspeed Finals in anticipation of their company entering Jeepspeed’s 2016 Series with a new competition approved Jeep Wrangler. The course at the Henderson 250 is deceptively smooth with many long straight sections but the ground is made of loose rocks with a layer of fine silt on top. The rocks kill wheels and tires and destroy drivelines and anything else they come in contact with. The silt blinds the drivers who struggle to make headway when the dust gets so thick. To be successful in Henderson, it takes skill, smarts, a great crew, and a little luck. It doesn’t hurt to be brave and hungry for a win either. 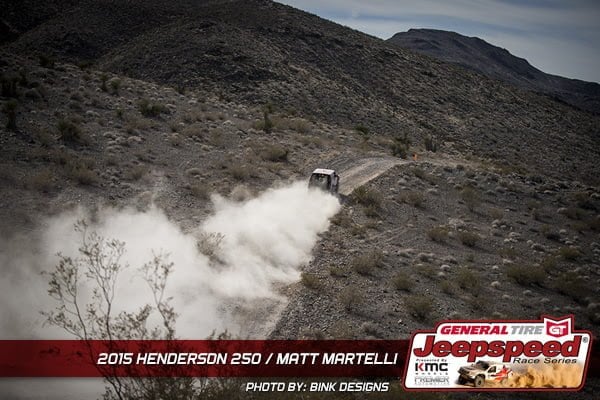 In the Jeepspeed Challenge class, Rick Randall, Rob Seubert, and Mike Bragg were locked in a battle for the season long points championship. With a last minute scratch due to a mechanical situation for Rob Seubert, it left an opening for Mike Bragg to make a run at the title. He had to win and Rick Randall, who has won 4 races in a row, would have to fail to finish. “We got the hole shot off the start and then passed for the lead in the rock quarry,” said Rick Randall, 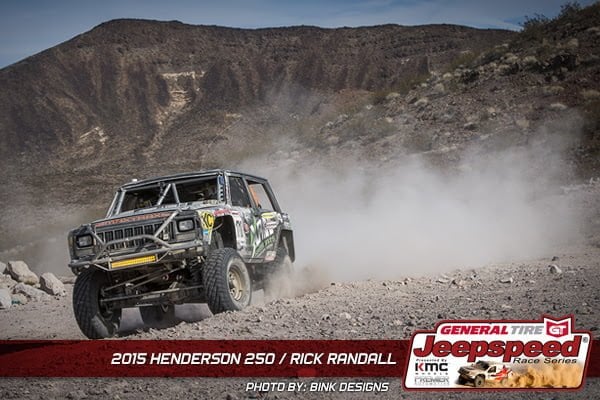 “We soon saw the helicopter above us filming. I was watching the helicopter and not the course and smacked a big rock that gave us a flat tire. We changed it and caught back up to Mike Bragg at the end of lap one. We knew it would be dusty in the quarry section so we used the dust to make our move into the lead again. We just needed to finish the race in order to win the championship but we wanted to get our 5th race win in a row so we pushed hard. It was great winning the championship. My Dad and I prep the truck for the races. It takes driving skill to run these trucks so fast without tearing things up. It would be easy to just cruise but the competition pushes you to go faster. We can’t wait to be back for another run next season.” Randall won the race over Mike Bragg by 48 seconds, his fifth straight, and took the Jeepspeed Challenge championship title.

“Our race went really well,” said Mike Bragg, “I’ve been super busy so I sent the truck to T&J Performance. They did the prep on it and it ran flawless. Randall passed us and we followed him on the first lap. We stopped in our pit and asked how far he was ahead and they said he did not go by. We thought they were not paying attention. The dust was so thick, we didn’t see him pulled over. We both pulled into main pit and my crew got us out first. We could put a gap on him but in the really rocky sections we had to back off; that’s when he would close in. The rocks are the same color as the dirt so you can’t really see them; I did not want to do anything stupid in the dust. On the second lap, I think I ran my fastest lap ever. I just put my foot to the floor. Randall was in a position to cruise to the championship but instead he ran it hard; I admire that. It’s great that our Dads raced against each other and now we are doing the same.” Mike Bragg finished seconds behind Randall for second place. 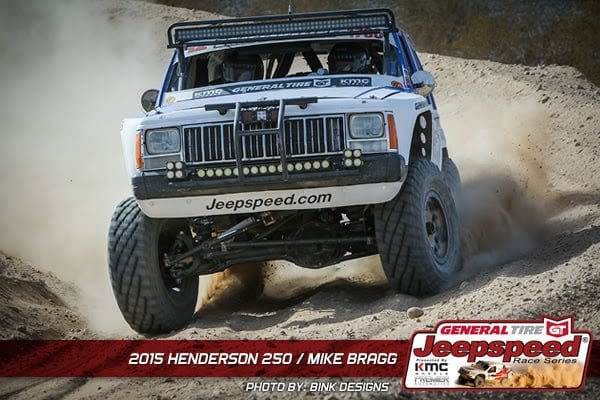 Third place in Jeepspeed Challenge went to Mad Media’s Matt Martelli. Martelli and crew, who are normally behind their cameras during events, took the wheel of the rental Jeepspeed to get a taste of racing first hand. “It was an awesome race,” said Martelli, We had a bit of downtime due to a fuel pump issue but we just kept moving. I handed the Jeep to Killian on lap two; who drove it in clean to the finish. We could have done two more laps!” The same Jeepspeed rental Martelli drove to a podium finish will be available all next season for those who also want to give Jeepspeed racing a try. 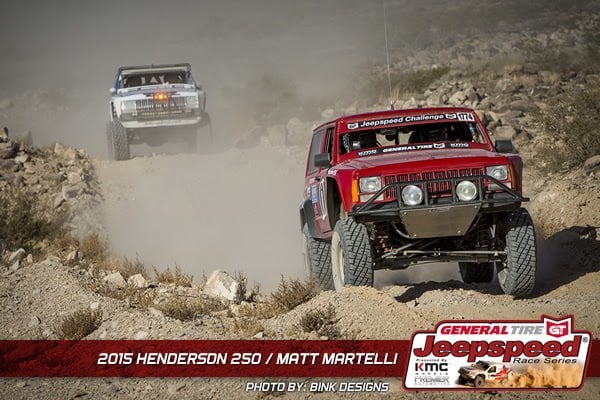 Finishing five minutes back from the Mad Media guys was Garrett Allred who was driving a borrowed Cherokee for the event. “We rolled our truck out testing before the race so we borrowed a Jeep for the race,” said Allred, “We didn’t want to miss any of the fun. We just wanted to finish the race. All three of us, me, Conner Batham, and Ian Massey, all took turns driving. On the second lap the front housing cracked. The tire was leaning in but we made it to the finish. It was a great year we had. Taking the rookie of the year title was just a blast. It’s been a steep learning curve getting faster and smoother behind the wheel. It’s been a dream come true; I’m really enjoying it.” 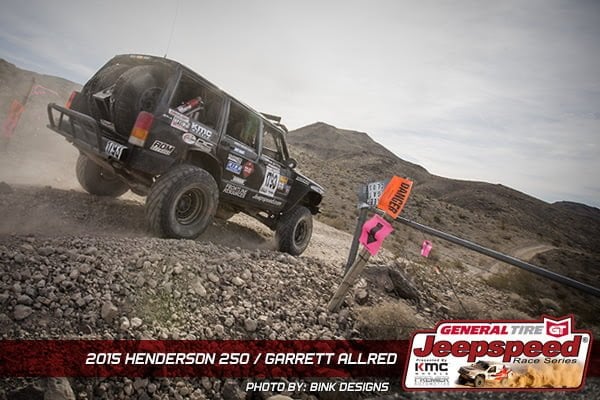 In Jeepspeed Cup competition, Bob Mamer had one of those perfect days in his turbocharged Jeep Comanche pick-up. He got the win and secured the championship with a trouble-free race; a rare treat in off-road racing. “It was the most fun I’ve had in a long time,” said Mamer, “On the first lap it was dusty. We saw a couple wrecks and a lot of cars on the side with problems. We built up a good lap and no flats to our General tires. We played it smart in the dust and my co-driver Mark Cowan did a great prep job on the truck. It was super dialed in and everything clicked for us. We heard that Billy (Bunch) rolled, but it was one of those days you dream about for us. Our turbo engine ran great thanks to Chris at Danzio and Tony at Rancho did our tranny in two days. The truck doesn’t have a scratch on it. We will wash it and run it again at Parker.” Bob Mamer runs his unique turbocharged Comanche against bigger V8 powered Jeeps in 3700, but still wins races and championships. 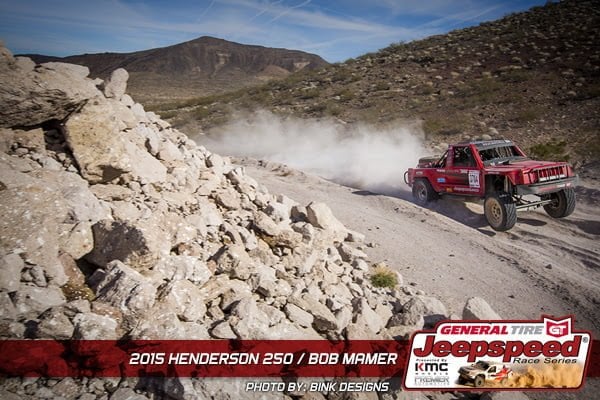 The battle for second place was a tight one. Eric Sigwing was allowed to drive the first approved tube chassis Jeep that fits Jeepspeed’s 2016 rules. It still needs an approved body to be legal but the concept was proven in the desert during this shakedown run with a strong showing in Henderson. There is a buzz in the air in anticipation of the 2016 season with new trucks, new events, and new teams emerging. 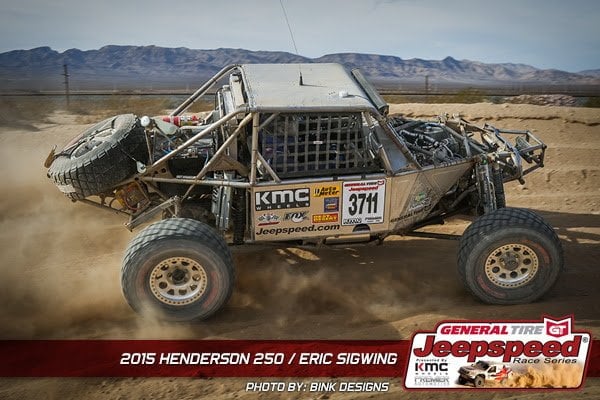 Sigwing duked it out with 2014 Champ Rob White who was driving his historic yet highly competitive Jeep Honcho. In the end, Sigwing grabbed second place by a razor thin margin of only 17 seconds. It was the first time White had the Honcho out racing this year as the team spent considerable time revising the suspension to increase its performance. “It was a pretty good first race back for us,” said White, “I’m happy with our performance. We took it a little easy on the first lap, our only issue was a couple of loose lug nuts. As our confidence increased, we passed the 3711, (Sigwing) then we got around Bunch. In the last 5 miles we were quite frankly surprised when 3711 got past us. We tried our best but we couldn’t get back around him.” 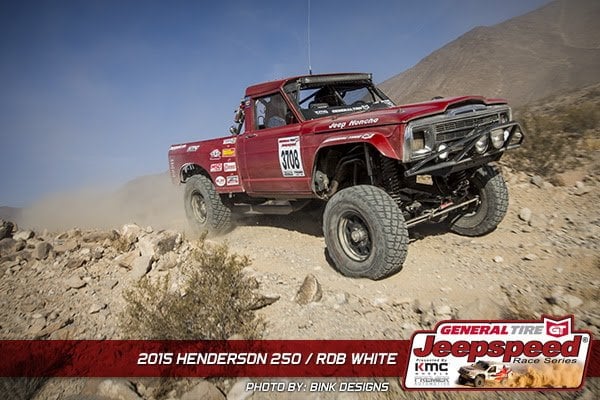 Jeepspeed racing has something for everyone. It’s the only spec type of racing that gives you the freedom to build your own vehicle. That freedom results in a wide range of unique vehicles that are all still equally competitive. For 2016, Jeepspeed will have rules updates for Class 1700, Class 3750, and Class 3700 that will further enhance the competition. They will be available at www.jeepspeed.com later this week. The rule changes include Class 1700 fuel cell mounting options, Class 3750 now has a, two shocks per wheel option, and Class 3700 may allow tube frames if they are constructed to current Jeepspeed dimensions. 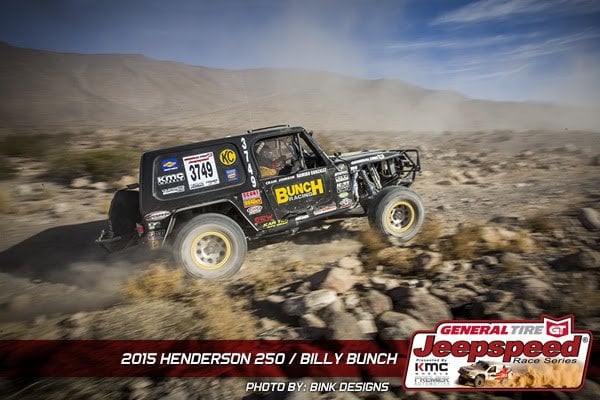 Jeepspeed racers and their families are looking forward to Awards Night Jan 16th. And the start of the 2016 series that commences on February 4-7 in Parker, Arizona for the BlueWater Resort, Parker “425.” For the additional information about the Jeepspeed series go to www.jeepspeed.com. There you will find additional info, deals on some attractively priced race Jeeps, Jeepspeed news, rules, forums, race results, videos and much more. Go to the Jeepspeed forum and you can read in-depth race reports from many of the Jeepspeed teams.

Jeepspeed Sponsors
About Jeepspeed
The Jeepspeed series is a competitive, cost effective series that has pitted Jeep vehicles against each other on challenging desert courses since 2001. Unlike the more expensive spec racing classes, there is no obligation to purchase your race vehicle or parts from the series organizer. You build your own vehicle the way you like as long as it fits within the rules. Jeepspeed offers the most fun and closest racing in the desert today. Jeepspeed series is supported by General Tire, KMC Wheels, Premier Chrysler & Jeep, KC Hilites, Currie Enterprises, King Shocks, Rubicon Express, G2 Axle & Gear, Smittybilt, PAC Racing Springs, Rock Krawler Racing Developments, Synergy Mfg, Poly Performance & Howe Performance.

About KMC Wheels
Founded in 1982, KMC has a 30-year legacy of delivering quality aftermarket and off-road wheels at competitive prices. KMC is a Wheel Pros brand. Wheel Pros products are sold worldwide in more than 20 countries on four continents and through a U.S. network of more than 25,000 authorized dealers. It is one of the world’s largest suppliers of branded custom wheels, performance tires and related accessories for cars, SUVs and light trucks. KMC Wheels Like no other.