The Yokohama Tire Jeepspeed series, Presented by KMC Wheels, headed to round two at the Best in the Desert, Silver State 300 race. The Silver State 300 has an interesting format. The course sits in a remote corner of Nevada that probably has more cows than people. It’s that remoteness, and the incredible terrain that makes it so different from other desert races. Depending on desert conditions, it may be the only time all year that racers have to contend with water crossings. It also has unique mountain roads that are more like trails; tight, twisty, and technical. When the racers are not crashing through streams or dodging trees in the mountains, they are flying at top speed through huge, open valleys interrupted with huge pockets of silt. Oh, and don’t forget the rocks. It is the most diverse, and technical course in the Jeepspeed series, but also one of the fastest. It is a test for every aspect of the racers, and their vehicles.

Since there is a lack of hotels around the race course, pre-race activities take place in Las Vegas. On race day, the teams load up and take their operation to the starting line outside Alamo, Nevada, around a 2 hour drive. For some, the race is their favorite of the year. For others, the additional drive, and logistical challenges outweigh their desire to race. Turnout is typically light, and with high fuel prices this year, it showed. It’s a shame that some missed out on what was such a fun race. Those who did participate were glad they did, and enjoyed every bit of the journey. 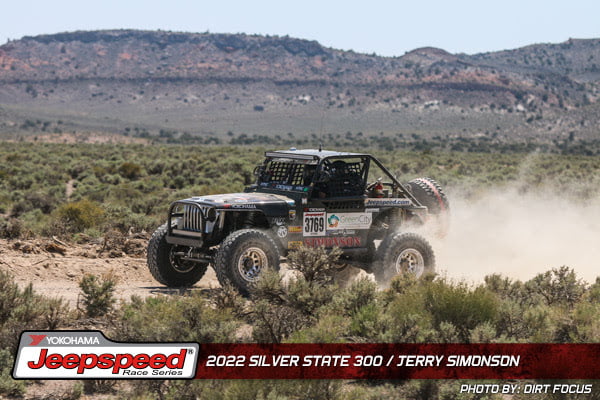 Alex Littleboy would be driving the number 3769 Jeepspeed Outlaw class Jeep of Jerry and Kathy Simonson. They brought along Chris Mortensen to co-drive, and Stan Pier, Jessica Quackenbush, Danny Simonson, Chad Simonson, Travis Ronne, and Jim Lord for pit duties, moral support, and just to have fun. This crew is just as accomplished at having fun as they are racing. They are the defending Jeepspeed Outlaw class champions, and give credit to their sponsors Green City Heating and Air, Bunker Bar, Jeepspeed, Yokohama Tire, KMC Wheels, Rugged Radios, and GG Lighting for supporting their efforts. They are not strangers to the Silver State race, and know the challenges it can bring. Alex in particular has a storied past with one obstacle in particular, the silt. “I usually drive the last leg of the race,” says Alex. “I like the technical stuff, and love the scenery. Last year, I did not get along with the silt beds very well. This year we ran backwards so we hit the silt beds first. We got a good start, were running hard, and the Jeep was running awesome. We were making good time, and made a couple passes. When we hit some deeper silt beds the truck started getting hot. It’s never run hot before. We thought that it might have been the radiator. Once we hit the fast graded roads it cooled down so we were doing 70, but the truck was running funny. It started to lose power. It didn’t lock up, but eventually it just wouldn’t run. We stopped to check it out and saw oil coming out of the exhaust pipe. We think the engine sucked in some silt. If not for that, we could have had a great race. That silted has it out for me. Next year, I’m not driving through the silt. This is the first time we’ve been stranded in the Jeep; it’s been so good for us. Last season we rolled it, and it took two and a half hours to get going again. It was a tough race for us, but we finished. The Jeepspeed guys are always there for us when we need help.” 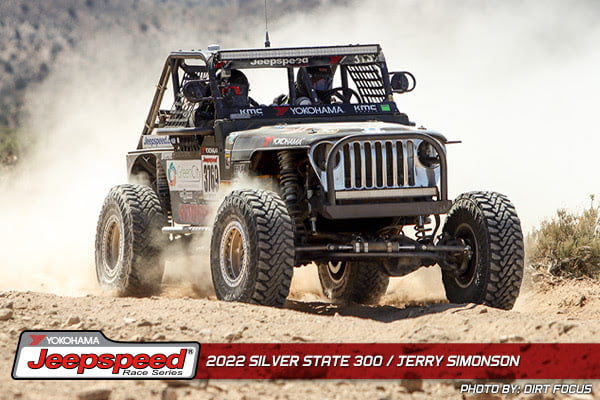 Chris Nissley showed up to race after a long hiatus from Jeepspeed. He raced several years ago, then put the windows back in his Cherokee and drove it to work. It was a really cool daily driver; one with a lot of capabilities. Now that his business is successful, he’s back racing with Jeepspeed again. “I’ve always liked this course,” said Chris. “There are not a lot of whoops so we can go fast. The mountains are really fun, they remind me of Mexico. We got a Jeep race motor from Mike Lesle. We took the race stuff off of it and put it on a stock bottom end from the junkyard. The Jeep was running great but we started to smell oil. I told my co-driver to grab the fire extinguisher, we might be on fire. It wasn’t burning, but the motor was covered in oil. At first we thought it was power steering fluid. We got going again but then the oil temperature gage went to zero. I thought we kicked a rod out, but it just spit out a sensor from the side of the block. I was frustrated because we didn’t have anything to plug the hole. I carry tons of fittings on my work truck that would fit, but I didn’t have any with me. We couldn’t continue without oil. I’m disappointed that we could not finish, but I’m glad it wasn’t anything we did wrong, it was just a faulty part. We didn’t miss anything in prep. It wasn’t worth getting mad about it; let’s go have a beer. I’ve been racing a long time. It’s a mental game, and a physical game. You either love it or it’s not for you.”

Scott Biehl knows what it’s like to not finish, but not at Silver State. He finished and won. “We went years without a finish but still had fun racing,” said Scott. “It’s about having a good time, winning is a bonus. Our plan was to just run our own pace, and have a good time. Then Chris came flying past us so we turned it up and chased him down. We got in his dust after 30 miles, and we could smell oil. We hoped he wouldn’t blow it up. We got passed him, and then were in a battle with a class 7 truck. We got around him and started to catch the UTV’s. We stopped several times to pull them out of the trees or roll them over. There were a lot of stuck vehicles in the mountains. Otherwise it was fast and fun in the trees; it was good to be up in the mountains. My co-driver Leafar Delgado and I got out of the truck so my Son and Travis got to do all the fun water crossings. It was a long race. The ruts were really deep in our section. The Jeep is narrower than the big trucks that make the deep ruts so it dances around on the crown in the middle. In other spots it seems like you can let go of the wheel and let the tires follow the ruts; like the old amusement park rides. I have to thank Eric Brown for helping us, and also the guys from Kevin Adler’s team. They already pitted their truck and loaded up, but they stayed until our Jeep came in just in case we needed any help.” The Jeepspeed series is the most fun racing series, it’s cost effective, and it’s worthwhile for grass roots drivers. You don’t need to be a millionaire to race Jeepspeed. Most teams build their own vehicles, and have pit crews made up of family, and friends. When a team needs help, their competitors pitch in to fill the void. The camaraderie is unlike any other racing series. It’s no wonder that the Yokohama Jeepspeed series is the longest running spec racing series in off road racing. Jeepspeed also has generous prize money and contingency awards. In addition to the prizes up for grabs at every race, the Jeepspeed series gets support from Yokohama Tire; Official tire and title sponsor, KMC Wheels; Official wheel and presenting sponsor, Jasper Racing Engines; Official powertrain, Rugged Radios; Official communications, GG Lighting; Official lighting, EVO Mfg.; Official suspension, Action Sports Canopies; Official canopy, T&J Performance; Official builder, and Associate sponsors King Shocks, Currie Enterprises, and Fluid Flow Performance. Think you would like to give Jeepspeed racing a try? For information about the Jeepspeed racing series go to www.jeepspeed.com. There you will find additional info, deals on some attractively priced race Jeeps, Jeepspeed news, rules, race results, videos, and much more. The next event will be the big one; Vegas to Reno on August 10th through the 13th. Jeepspeed racers will be covering over 500 miles of tough Nevada desert. 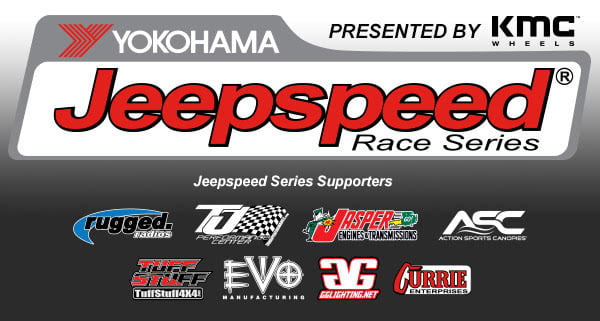 About Jeepspeed
The Jeepspeed series is a competitive, cost effective series that has pitted Jeep vehicles against each other on challenging desert courses since 2001. Unlike the more expensive spec racing classes, there is no obligation to purchase your race vehicle or parts from the series organizer. You build your own vehicle the way you like as long as it fits within the rules. Jeepspeed offers the most fun and closest racing in the desert today. Jeepspeed series is supported by Yokohama Tire, KMC Wheels, Jasper Racing Engines, GG Lighting, Rugged Radios, EVO Mfg., King Shocks, T&J Performance, Currie Enterprises and Action Sports Canopies.

About Yokohama Tire
Yokohama Tire Corporation is the North American manufacturing and marketing arm of Tokyo, Japan-based The Yokohama Rubber Co., Ltd. Since expanding to the United States in 1969, we’ve been an industry leader in tire technology and innovation across the globe.