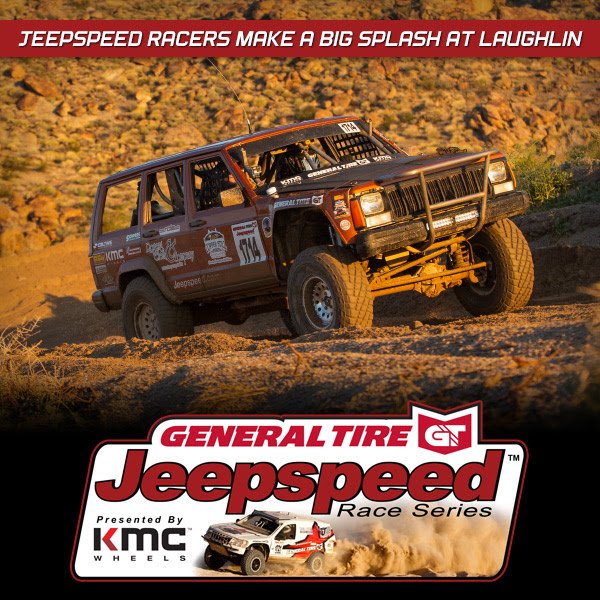 Jeepspeed racers got wet and wild when torrential rains hit the Best In The Desert series Laughlin Desert Classic (LDC) in Laughlin, Nevada. The LDC is always a challenge because it’s run as an extended short course. It has an infield section, but also ventures out into the desert landscape for several miles of whoops, ruts, and rocks. The challenge comes from running several laps in desert terrain at a short course pace. There is no time for strategy, just unbridled speed. The one saving grace is that the heats are run over 2 days. If you have a bad day on Saturday, you can make changes, and redeem yourself on Sunday. This year they ran the course backwards which meant they would be hitting the squared off, harsh side of all the whoops on course. Like a sand dune, the undulating bumps that build up due to braking, and acceleration have a smooth side, and a steep vertical side. Hitting the vertical sides is like hitting a curb. It’s even more punishing than the already brutal whoops. Typically it’s the blinding dust that plays a huge part on race day, but this year the rains came and pounded the area. Not only was the rain blinding while it was coming down, but enough water fell on day one, and the morning of day two, to leave huge ponds of water everywhere. In order to avoid the water, which was 3 to 4 feet deep in some areas, racers had to go wide; right where the rocks were waiting to crush wheels, and shred tires. It was a good thing that many of the teams were running tires and wheels from series sponsors General Tire, and KMC Wheels. None of the racers we spoke to had any issues with flat tires. What they did have was muddy faces, and gritty teeth. The race might not have been long on miles, but it was long on fun.

The Jeepspeed series has 4 classes. Each class has different rules with 1700 being the closest to stock, and class 4700 being the most modified. At Laughlin classes 1700, 2700, and 3700 would race in heat one; running three laps. Class 4700 would race in heat two and run 4 laps. The winners in each class would have the lowest elapsed time over both days of racing. Winning on day one is a big deal, but the overall win is what counts. Class 1700 overall winner Travis Fletcher (He was driving for Scott Biehl who was unable to make it to the race), did in fact win on day one. He used that slight advantage on day 2 to run just fast enough to cover his rivals. Tyler stone would cross the line first on Sunday after a back and forth battle with Travis on lap 3, but Travis had him beat on corrected time. Stone was 3rd behind Tim Martin on day one, so Travis had around 3 minutes advantage over him going into day 2. The way corrected time works, Tyler would have to beat Travis by over 3 minutes to have won the overall. He gave it a shot, but could only put a minute on Travis. The only regret had by Travis was that Scott was not able to share in the victory. Tyler Stone was 2nd overall, and Tim Martin was 3rd. 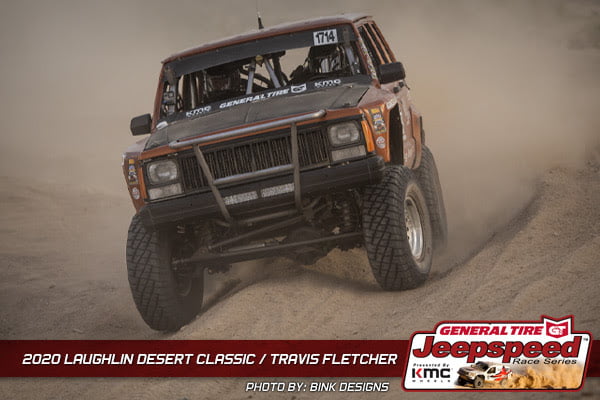 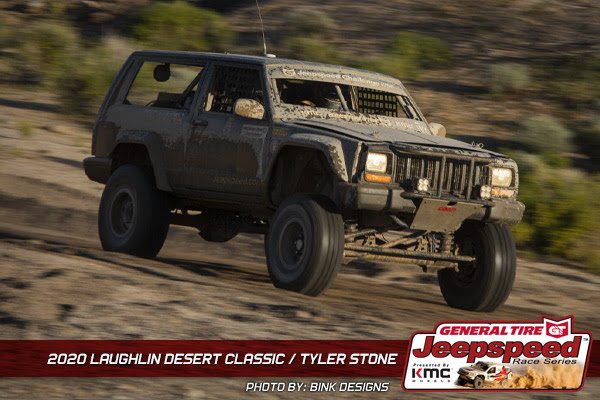 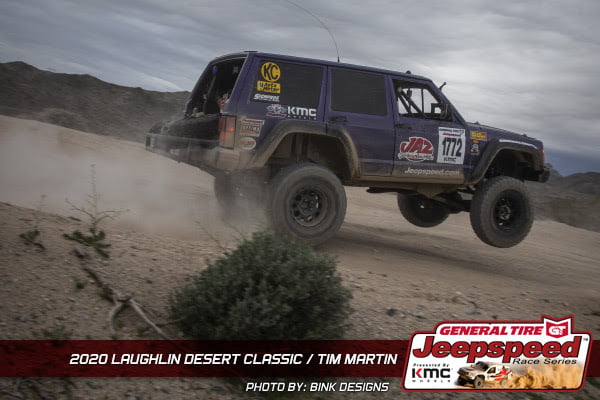 There was so much water, and mud on the course day 2, many racers had mud in their faces. Once your face shield gets plastered, you may be forced to leave it open, and take it right in the face. Tyler stone had on his face shield, and a pair of sunglasses, but still had a face covered in mud both days. There are thin pieces of clear plastic you can fix on your visor called tear-a-ways. When they are covered in mud, you tear it off to expose the next one. Once all the tear-a-ways are gone, and the rags your co-driver brought are all wet, survival takes over and you reluctantly open that visor. Despite the pain that will come, you have little choice. 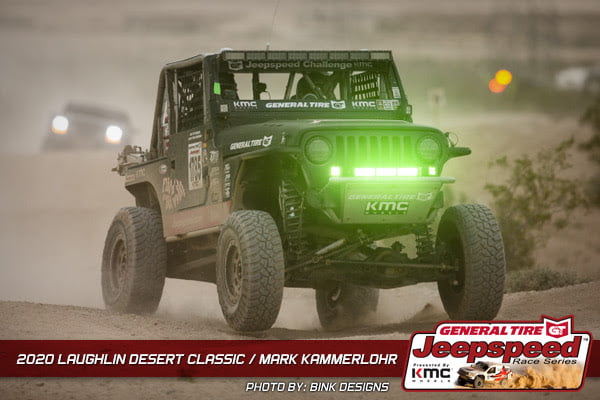 Class 3700 overall winner Dan Simonson is from Washington State, and races short course there. It rains a lot so he has tons of experience in the mud. He has a secret to keeping his shield clean. When he sees a load of mud heading his way, he sticks his hand up to guard his face. It was Dan’s Wife Mikki’s Birthday and she wanted to spend it racing, so they came to Laughlin. She lost the power steering and had to muscle her way to the finish line on day one. She finished 3rd. Scott Dzierzanowski won, and Robert Thomasson was 2nd. On day 2 her thumbs were swollen so she and Dan switched seats. Dan and Mikki were the only ones to finish day 2 in their class so they got the overall win. Happy Birthday Mikki! 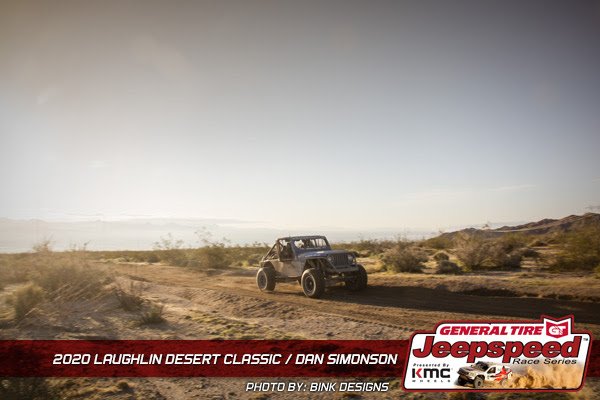 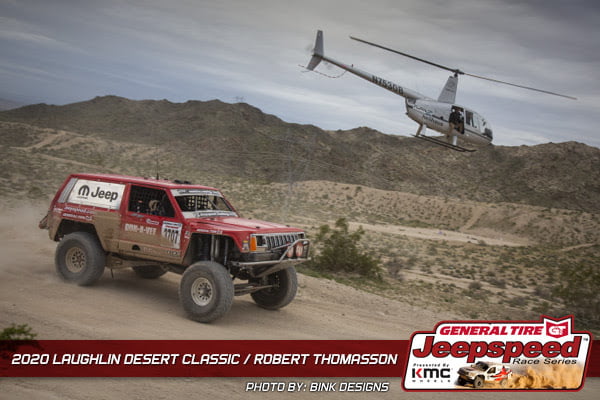 The class 4700 Jeepspeed’s ran in heat 2. They got some of the worst rain on day 1, and much of the remnants on day 2. The 4700 class is super competitive this year with fast, and experienced teams competing. Garett Allred followed up his win at the season opener in Parker with the win on day one. On day 2 it was the Bunch/Archer crew but Allred took the overall. “It came down to how fast you could go without seeing,” said Allred. “I had so much mud on my visor, and in my eyes; my face was raw. Jesse Archer caught me on lap 4. That’s when I got a face full of mud. I guess he lost a fuel pump. I tried everything to get the win on day one. He passed me on day 2 on a mission, but I knew we just had to get to the finish to take the overall. I was going around a slower truck and went off the course. I broke an axle. It was tough getting through all the mud with one wheel driving. I hope to make it three in a row at the Silver State race but I know Jesse will be coming for us. I hope we can run him down; he’s a one hell of a driver.” In class 2700 it was a clash of titans. Rick Randall and Skyler Gambrell would duke it out. Those two have won just about everything, and in multiple classes. On day one, Randall would come out on top; beating Gambrell by a scant 30 seconds. On day 2 Gambrell made up those 30 seconds and put around 10 seconds on Randall to take the overall. Like many, Gambrell won at a cost. “I was driving blind with my visor up and glasses covered in mud,” said Gambrell. I finally got a rag on my glasses so I could see more than 10 feet in front of me. The water and mud was beginning to get manageable when I crossed the finish line 1st in class and ended up the 1st overall 3 lap Jeepspeed winner too!” 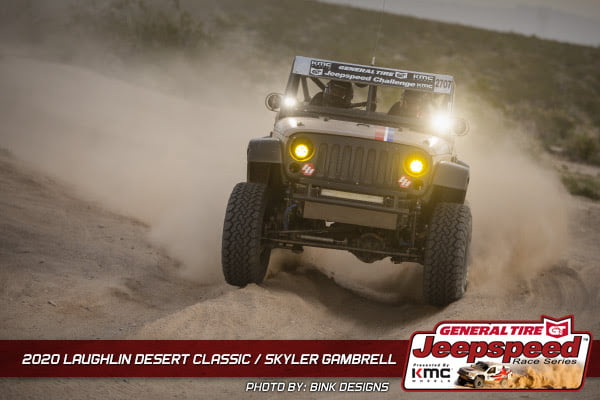 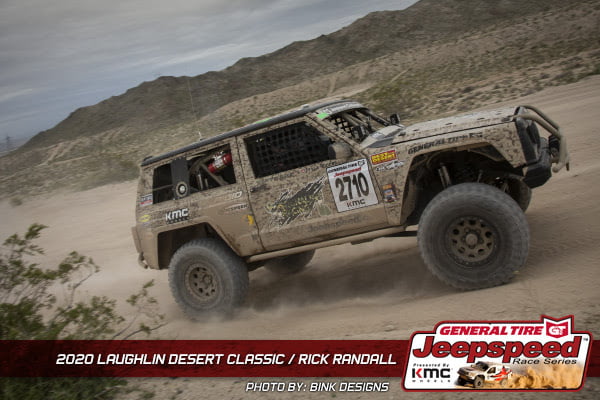 The overall finishing order was Allred 1st, Rob Seubert 2nd, and Andrew Hulse 3rd. 3rd overall Andrew Hulse has a great solution for racing on a budget. He shares his truck with Wayne Guidinger, and Michael Kraft. The three all help prepping the truck and share the driving. Many teams change drivers during a race so their team concept is not out of the norm. It is a great solution for racing on a budget though. There is so much comradery, and mutual assistance in the Jeepspeed series, it seems kind of natural. It is very common for several teams who compete against each other to share resources on longer races, and help each other in the pits. Then there is the strong support that racers get from Jeepspeed itself. When Dan Simonson was having problems with his power steering Jeepspeed’s Clive Skilton suggested he run genuine GM power steering fluid. Both Clive, and Jeepspeed’s Mike Barnett have decades of racing experience under their belts. The switch in fluid brand fixed Dan’s problem. The same problem solving takes place at every race. It’s not uncommon to see a mixed group of teams all pitching in to get someone going again. Jeepspeed is all about tight competition. Their racers thrive on it, and would rather out-drive their fellow competitors than to see them break. Thanks to the teamwork and quality of trucks, they are going faster than ever. 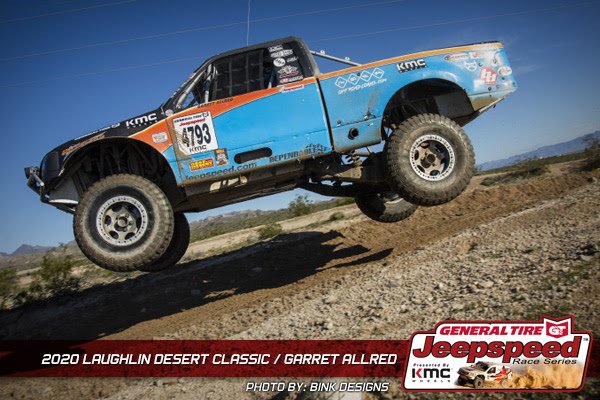 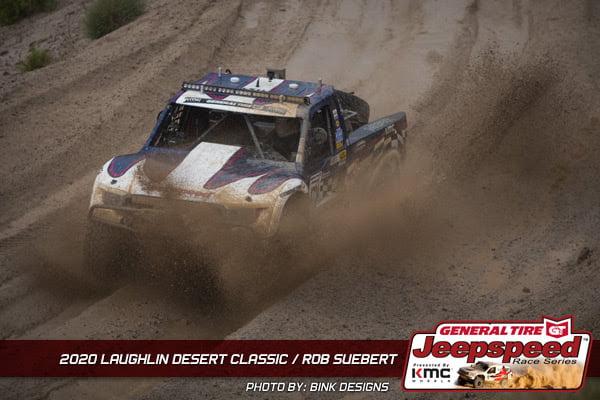 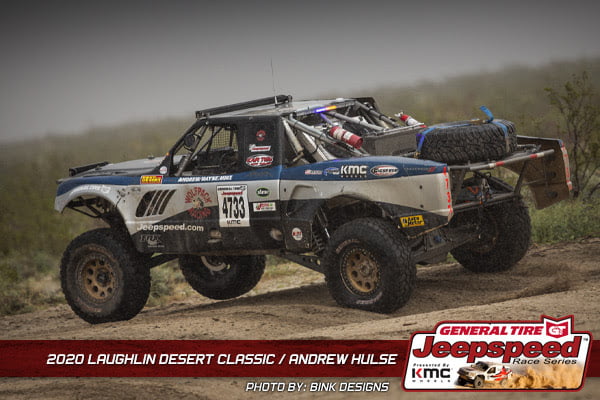 Thanks to General Tire, KMC Wheels, Rugged Radios, Jasper Engines & Transmissions, T&J Performance Center, NEO Synthetic Oil, Tuff Stuff 4×4, and Currie Enterprises, Jeepspeed racers enjoy strong support, and bonuses. Think you would like to give Jeepspeed racing a try? For information about the Jeepspeed racing series go to www.jeepspeed.com. There you will find additional info, deals on some attractively priced race Jeeps, Jeepspeed news, rules, forums, race results, videos and much more. Go to the Jeepspeed forum and you can read in-depth race reports from many of the Jeepspeed teams. You can even show up and learn what it takes by helping out in the pits. 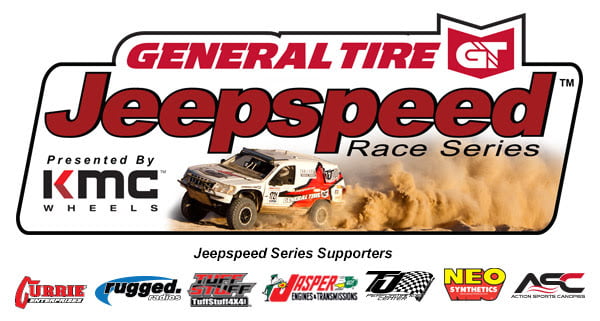 About Jeepspeed
The Jeepspeed series is a competitive, cost effective series that has pitted Jeep vehicles against each other on challenging desert courses since 2001. Unlike the more expensive spec racing classes, there is no obligation to purchase your race vehicle or parts from the series organizer. You build your own vehicle the way you like as long as it fits within the rules. Jeepspeed offers the most fun and closest racing in the desert today. Jeepspeed series is supported by General Tire, KMC Wheels, Currie Enterprises, Action Sports Canopies, Jasper Racing Engines, Rugged Radios, Tuff Stuff 4X4, Rock Krawler Suspension, King Shocks, and T&J Performance