Racers in the General Tire Jeepspeed Series presented by KMC Wheels had the opportunity to run wide open at the Best in the Desert series Laughlin Desert Classic in Laughlin, Nevada. Instead of the typical desert racing course, Laughlin is only 16 miles long and 90 percent is fast, graded fire roads. The race format consisted of 3 laps on Saturday and 3 more on Sunday. Winners were determined by the combined fastest times from both heats. Jeepspeed racing usually takes patience and strategy. They get plenty of challenge from their fellow competitors, but their toughest foe is typically the brutal desert terrain. At Laughlin, there were no pit stops, no strategy, and no limits. Competitors ran wide open. 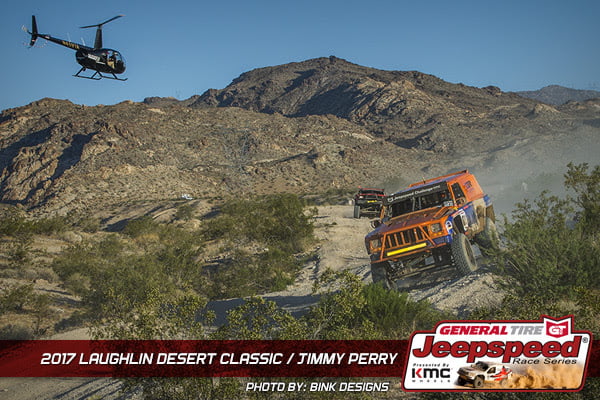 16 teams of Jeep and Dodge vehicles took to the course in three classes. The 1700 class is for six cylinder Jeeps including Cherokees, Wranglers and the Grand Cherokee. Class 2700 allows Jeep and Dodge trucks with Mopar engines, and the 3700 class is for Jeep and Dodge trucks with any engine allowed. Whether you like a short wheelbase Jeep, Cherokee, or a pick-up, Jeepspeed has a class for you. One of the reasons why Jeepspeed racing is so rewarding is that competitors can purchase a vehicle or build their own. The rules are simple and the costs are a fraction of any other spec racing class. Many of the parts needed to build your Jeepspeed racer are supported by the series sponsors General Tire, KMC Wheels, Currie Enterprises, King Shocks, Rugged Radios, Rubicon Express, G2 Axle & Gear, Smittybilt, Howe Performance, NEO Synthetic Oil, Jasper Racing Engines, Southwest Boulder & Stone, and GG Lighting. In addition to strong aftermarket sponsor support, generous bonuses of cash and parts can be earned at every race. In the 1700 class, the three teams that finished on the podium were running bumper to bumper at different times during the weekend. Rick Randall was fastest on day 1 in his Cherokee with Garett Allred and Rob Seubert finishing second and third. During Sunday’s heat, Allred took the victory in his Grand Cherokee with Randall close behind. Seubert, also in a Jeep Cherokee, was consistent with a second straight 3rd place finish. After trading positions on both days, the top two finishers were only seconds apart with Randall holding a slight advantage; taking the overall win by mere seconds. Allred finished second on the weekend but took the heat race victory on Sunday, his Birthday.

Randall had a special co-driver with him this weekend; retired Marine Joanna M. Sweatt. Randall is supporting Vetdrenaline, a program that takes Veterans racing. “People do not understand that after you’ve experienced extreme situations in life, you crave that excitement forever,” says Vetdrenaline’s Jess Maney, “When we are forced to reconstruct our lives after our injuries and traumatic experiences. Many of us don’t have an outlet to feed the rush, to keep our edge. I truly believe that this leads to depression and substance abuse and even suicide. Our team of Veterans and Patriots look forward to being able to provide an outlet for energy and excitement to help veterans in their transition surviving the peace after war.” Rick Randall and his Jeepspeed team promised excitement for Joanna Sweatt, and they delivered! The 2700 class was won by Skyler Gambrell in his street legal Jeep Grand Cherokee.  “With our windows up, and the AC on, we lined up in staging next to a race gas fueled, iron duke motored Comanche and a 4.7 i-6 stroker XJ,” said Gambrell, “It felt like I had brought a butter knife to a gun fight, but to my surprise, our little mini-van engine fired off it’s 3.7 liters of fury, and we pulled off out of the infield 1st in class! Knowing we had untested suspension, I took advantage of the fast rally type roads for the first few miles and kept ahead until we hit the rough proving grounds section after the first road crossing. We missed the mark with the spring rate and valving in the front end so I had to slow considerably in the big holes; but we soldiered on. Somewhere near the end of the first lap, the upper a-arm came in contact with the coilover reservoir, and we broke the fitting off the shock, pumping out all the fluid. The next two laps we could go as fast I could in the smooth stuff and pretty much put it in reverse through the rough stuff. We still managed to pull off the win. With the shock repaired, my co -driver Russell “Full-Pull” Ficker and I pulled the holeshot on Sunday and motored around to a fairly uneventful day. The course was overwatered and we had some visibility issues, but to my surprise, we crossed the line to take the win in the 2700 class! The Jeep still needs some tuning on the front end to really show what the car is capable of, but it was a great weekend and a lot of fun!” Second place both days was Wayne Guidinger in his Comanche pick-up. “We had some gremlins on day one but managed through it,” said Guidinger, “The truck handled great through the bumps and ran fantastic all weekend. My team did everything they could to put everything together and it showed. We had strong support from everyone, and had an awesome time!”  Third place Mike Shetler had a strong pace going on day one keeping Gambrell in his rear view mirror. On lap 2 they had ignition troubles and tried to limp it in to the finish. It completely died on lap 3 and they were unable to finish. They got it fixed before Sunday’s heat race and finished all 3 laps to earn third place overall. In the 3700 class, Eric Sigwing and Billy Bunch took turns winning. Sigwing took his Jeep rock racer to the win on Saturday and Bunch’s team took the heat win and wrapped up the overall victory on Sunday. “This was much better than the old people’s home,” Billy Bunch joked after the heat race on Saturday, “They let me out for the weekend. We had a slight issue with the brakes so I could not run as fast as I wanted to. The truck is really coming along. The suspension is a little soft but we will have it better for Vegas to Reno.” Billy Bunch was there in the very beginning of the Jeepspeed series and is still winning races. Eric Sigwing won the heat on Saturday but lost his front drive in the process. He was locked into a battle with Mike Bragg until Bragg lost an engine in the big Dodge pick-up. “We had a bit of a rough time on Saturday but still managed to win,” said Sigwing, “We went a little too big off a jump and lost the front driveshaft on the landing. We finished second on Sunday running in two wheel drive. Thanks to the crew, we were ready to go on Sunday. Despite some issues, we had a really fun time!” Conrad Batham finished in 3rd place both days to earn 3rd overall in his mean looking Dodge pick-up. 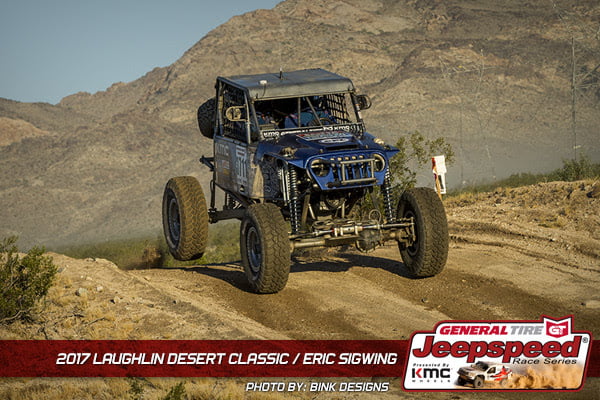 Think you would like to give Jeepspeed racing a try? We have a special event this summer that will be a great opportunity to do just that. The General Tire Jeepspeed Racing Series is proud to announce a huge event for the summer of 2017, the Jeepspeed Open presented by Currie Enterprises. The Run What You Brung Summer Show will be held in conjunction with the M.O.R.E. night race on July 14-16 in Barstow, California; one of the most popular races of the year. Jeepspeed will host The Jeep race everyone has been waiting for. No tire restrictions! No wheel restrictions! No burdensome rules, everyone can join in on the fun! Vehicles need only to pass technical inspection to insure they satisfy the race organizer’s safety requirements. The event is open to any desert race vehicle recognizable as a Jeep, Dodge, or Mopar appearing vehicle. For information about the Jeepspeed racing series go to www.jeepspeed.com. There you will find additional info, deals on some attractively priced race Jeeps, Jeepspeed news, rules, forums, race results, videos and much more. Go to the Jeepspeed forum and you can read in-depth race reports from many of the Jeepspeed teams. 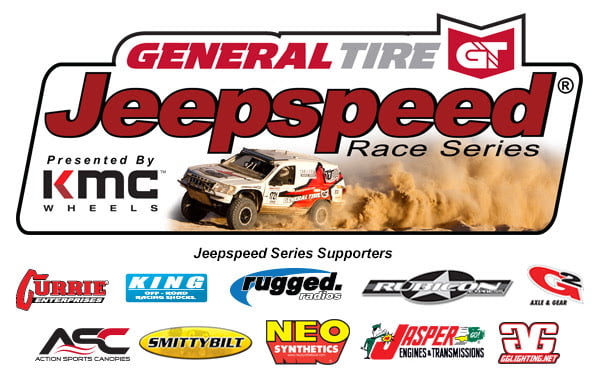 About Jeepspeed
The Jeepspeed series is a competitive, cost effective series that has pitted Jeep vehicles against each other on challenging desert courses since 2001. Unlike the more expensive spec racing classes, there is no obligation to purchase your race vehicle or parts from the series organizer. You build your own vehicle the way you like as long as it fits within the rules. Jeepspeed offers the most fun and closest racing in the desert today. Jeepspeed series is supported by General Tire, KMC Wheels, Currie Enterprises, King Shocks, Rugged Radios, Rubicon Express, G2 Axle & Gear, Smittybilt, GG Lighting, Jasper Racing Engines, NEO Synthetic Oil, Southwest Boulder & Stone, and Howe Performance.