When Jeepspeed racers lined up for the Best In The Desert series season opener in Parker, Arizona, they all must have had the same strategy; run flat out and leave the competition in the dust. The Parker 425 is not typically thought of as a sprint race, the course is very challenging, but a new format made a big difference on how the race played out. The limited classes, like Jeepspeed, would run their own race in the morning and the high dollar exotic vehicles would start later in the day. Instead of racing through the ruts and holes caused by 800 horsepower and 39 inch tires, Jeepspeed racers had a smooth course ahead of them. When combined with a certain ease in the air and less concern about the rear view mirror, speeds increased along with calculated risks. With nearly everyone running on the edge, some went over; both figuratively and literally. The second place finishers in Jeepspeed challenge (1700) and Jeepspeed Cup (3700) both rolled their trucks and recovered to finish on the podium. 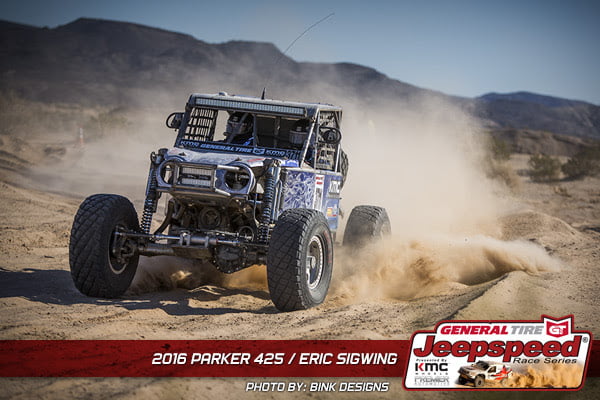 That makes a strong statement about the tenacity of those teams, the strict safety rules in the General Tire Jeepspeed series, and the stout components that racers rely on from the many sponsors and strong supporters in the series like General Tire, KMC Wheels, Premier Chrysler Jeep of Placentia, T&J Performance, Rock Krawler, Currie Enterprises, G2 Axle & Gear, Howe Performance power steering, KC HiLites, King Shocks, Rubicon Express, SmittyBilt, and Jeepspeed would like to welcome Rugged Radios as the official communications of Jeepspeed for 2016. Racer Eric Anderson had a scary moment when he crashed through a fence and almost landed in the Colorado River. Thankfully, he was not seriously injured; suffering some broken fingers but otherwise unharmed. Jeepspeed is the only spec type racing that allows you to build your own vehicle as long as it conforms to a few simple rules. Despite a huge range of vehicle types and many different builders, Jeepspeed has had an impeccable safety record over its 15 year history. 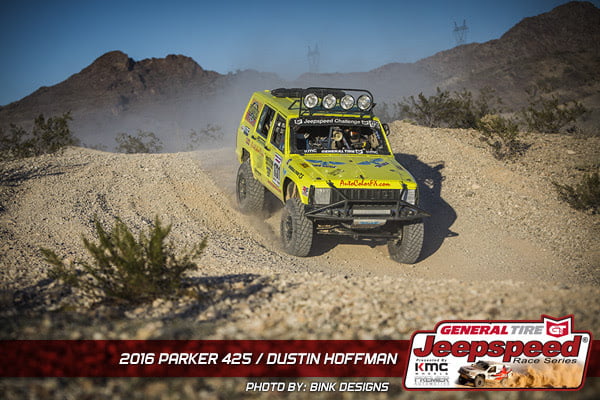 In a twist of irony, Jeepspeed Challenge winner Skyler Gambrell did everything he could to not crash, not break and not take risks while he unconsciously cruised to victory. He was driving the house rental Jeepspeed that landed the Mad Media boys on the podium at the season ender in Henderson last year. “I dusted off the Cherokee and did a quick prep,” said Skyler, “I decided a rear start would be my best option since I had never driven this truck before. I was excited to have my co-dog and anger management coach Matt Vogler back for this race. I told myself I was going to drive at an easy pace and not push the vehicle past its comfort zone. We never went over 70mph all day and just tried to focus on being smooth while maintaining a solid average speed throughout the course. I had a fun time driving the whole second lap not having to worry about the “fast” traffic coming from behind. I crossed the finish line in 6:42 thinking I was in 3rd place; I never saw another vehicle on course. When I was told at timing and scoring that I was the first Jeep in, it was an awesome feeling!” 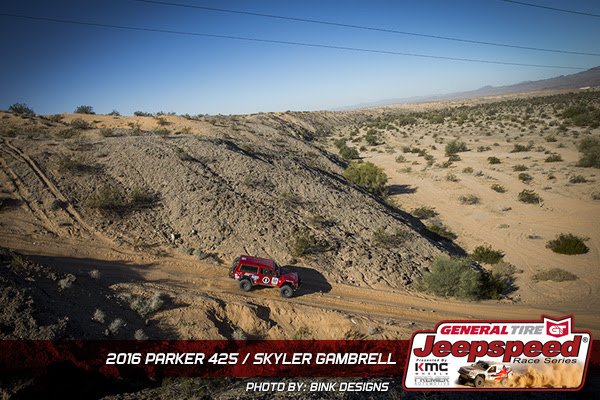 Second place was long-time Jeepspeed racer and former champion Eric Helgeson. “The Parker 425 was to be a special race for me and my family,” said Helgeson, “It was my first race back behind the wheel in two years due to a back injury; I had a lot of mixed emotions. On September 21st of 2015, my grandson Parker was born. He was named for all the awesome memories our family had from past races and multiple wins at the Parker 425. My son in law, Steven Mastro, had shown a lot of interest in going racing so this seemed the perfect time to bring old “Blue” out of retirement. I would motor up to the start line completely unfamiliar with the car and with a true rookie in the co-dog seat. My rookie co-driver quickly learned how to guide me by GPS. We had a bit of a back and forth battle with an impatient 1716. After a couple love taps from them, they made their way past, only to find themselves on the side of the road watching us pass them back. We battled through the dark without incident from there until just before pit 2 where we rolled the jeep at what is now been nicknamed “Helgeson” corner. After getting flipped back over, the rest of the first lap was slow, trying to get my bearings back and learning how to communicate with my rookie co dog. We made it to main pit for fuel and a quick once over. The car looked like it had driven through a war zone with missing fenders, hood and front clip. The light bar was damaged and the roof was crushed. Despite how it looked, it was mechanically fine. 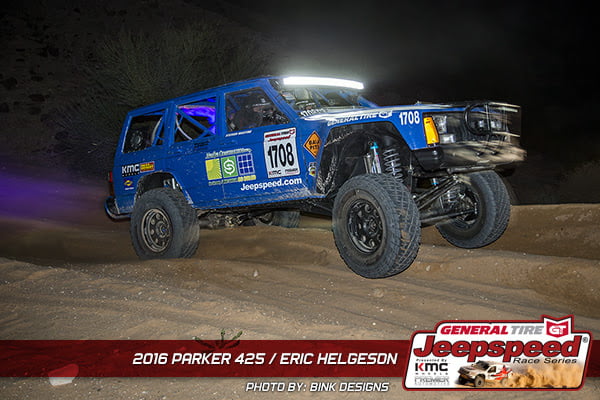 We were told we were 7th on course, 45 minutes behind the leaders. Knowing the car was in good shape, we decided to ratchet it up and try for a podium finish. We started picking off cars one at a time, counting a total of 4 that we passed. With 20 miles to go, we slowed our pace figuring we wouldn’t catch the faster leaders. We were content to settle for a finish but as we rolled through the finish we were told congratulations you are the second Jeepspeed in. With everything we had to overcome, a second place was welcomed and well deserved. It was another great race and memorable family trip for us. Baby Parker got to watch his Dad and Grandpa on the podium in his namesake race and Steven can say he’s been upside down in a race car but didn’t quit and pulled off a 2nd place finish in his first race.”

Another Parker at the race was third place finisher Tim Martin’s co-driver Parker Stewart. With a name like that, the young man is destined to be an off-road racer. Martin also had his Brother Tod along for the race. Tim’s Randall Racing engine ran great but he had some issues with his suspension. “Parker had very little time in the Jeep and my brother had zero time, it’s hard to find a place to test when Utah is covered in snow,” says Tim, “We hit the first jump and I heard Parker say “That was awesome.” We passed 1793 and then came upon a jeep that I saw was on fire so I stopped next to them and yelled out the window to alert them. The first lap was uneventful for us and we finished it in first place. The two-race format was awesome. The conditions were the best I have ever raced in at Parker. 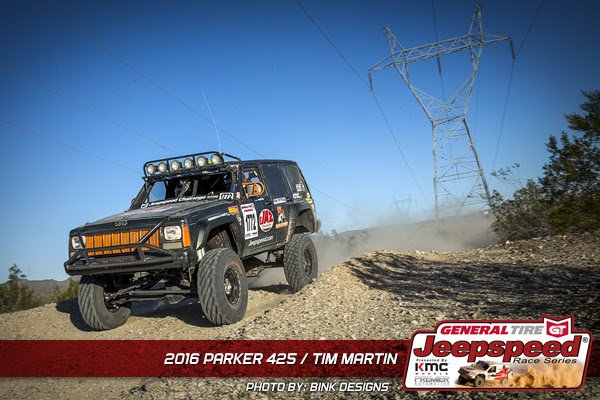 I averaged 44.1 mph on the first lap; the fastest ever for me by far. On lap two we bottomed out the front suspension hard. After the hit, the steering wheel was off center in my hand and I knew that something was bent or broken. We pressed on to pit one and the flagman pointed down at something on the jeep when we stopped. Someone took a quick look and told me the lower left ball joint was broken off. Sure enough, it was broken right off the inner C. Not sure how we made it there with that damage. I threw my gloves at my brother and told him we were done. By this time, more people had started to gather and offer advice on how to fix it. I decided to try and fix it and not accept another DNF at Parker. Everyone pitched in and provided whatever tools I needed. By the time I got it welded and reinforced with a couple of bolts, we were in 3rd place. Someone also noticed while we were making repairs that the upper right control arm was missing. Still not sure when that happened. We got back in and we were off. It was Only 102 miles to the finish. I have never had such stress while driving. We had to roll over all of the jumps; I didn’t dare catch any air fearing that the tire would come off. Benny Pena took a look at it at pit two and said it looked good so we pressed on. As I was approaching the finish line, Sara was giving us updates on 1716; they were reeling us in. I pushed hard where I could just hoping it would hold together. We crossed the finish line ahead of 1716 but not positive we were still ahead on time. The clock ticked on and 1716 also crossed the finish line. We ended up in third place, 2 minutes ahead of them.” Congratulations to Tim and his team for refusing to quit.

In Jeepspeed cup, Mike Bragg took the win followed by Jason Mack who rolled his Jeep on lap one. Mack admitted that he just overshot the corner. He managed to end up back on his wheels and keep going to finish second. Bragg was racing his 1700 class Cherokee in Jeepspeed Cup while he completes his Dodge Ram pick-up truck. “We wanted to get some points for the Dodge when we get it done,” said Bragg, “The course was fast and forgiving. 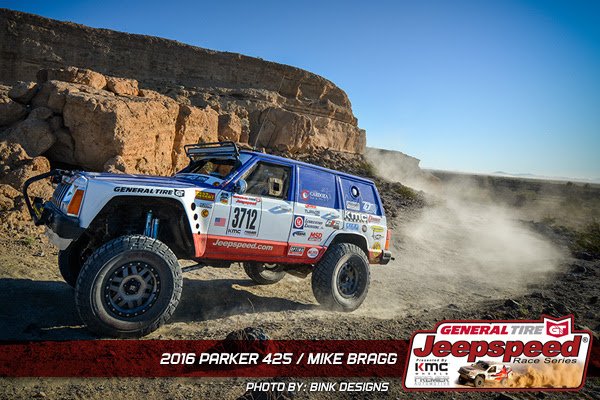 It was rough in some spots but you just had to take it easy there. I liked starting early; you didn’t have to worry about the faster trucks catching us. The three lap racers on the course at the same time seemed to be more patient. The early start also gave us a chance to use our KC Hilites lights. We broke a shock mount on lap two but welded it back on at the next pit. We had a great day; no flats and very little wear and tear on our General Tires. We hope to have the Dodge ready for the Mint 400.” 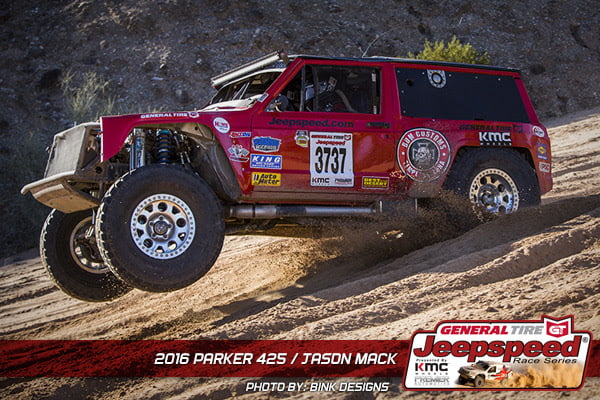 Those who did not finish, (DNF) included 2015 Champ Rick Randal who was sporting a new Bilstein wrap. He lost a rod bolt in the engine. Stock car/ rally driver Jim Morris. Korbet Krough in a brand new truck. H Bomb racing’s Ernesto Enriquez had an oil cooler fire and local racers Justin Brinkerhoff and Cole Seiber. The next race in the General Tire Jeepspeed racing series presented by KMC Wheels and Premier Chrysler Jeep of Placentia will be The Mint 400 in Las Vegas, Nevada March 10-13. The Mint 400 will be just as tough as the season opener in Parker. For the additional information about the Jeepspeed racing series go to www.jeepspeed.com. There you will find additional info, deals on some attractively priced race Jeeps, Jeepspeed news, rules, forums, race results, videos and much more. Go to the Jeepspeed forum and you can read in-depth race reports from many of the Jeepspeed teams. The Jeepspeed series is a competitive, cost effective series that has pitted Jeep vehicles against each other on challenging desert courses since 2001. Unlike the more expensive spec racing classes, there is no obligation to purchase your race vehicle or parts from the series organizer. You build your own vehicle the way you like as long as it fits within the rules. Jeepspeed offers the most fun and closest racing in the desert today. Jeepspeed series is supported by General Tire, KMC Wheels, Premier Chrysler & Jeep, KC Hilites, Currie Enterprises, King Shocks, Rugged Radios, Rubicon Express, G2 Axle & Gear, Smittybilt, Rock Krawler Racing Developments and Howe Performance.
Visit // www.jeepspeed.com