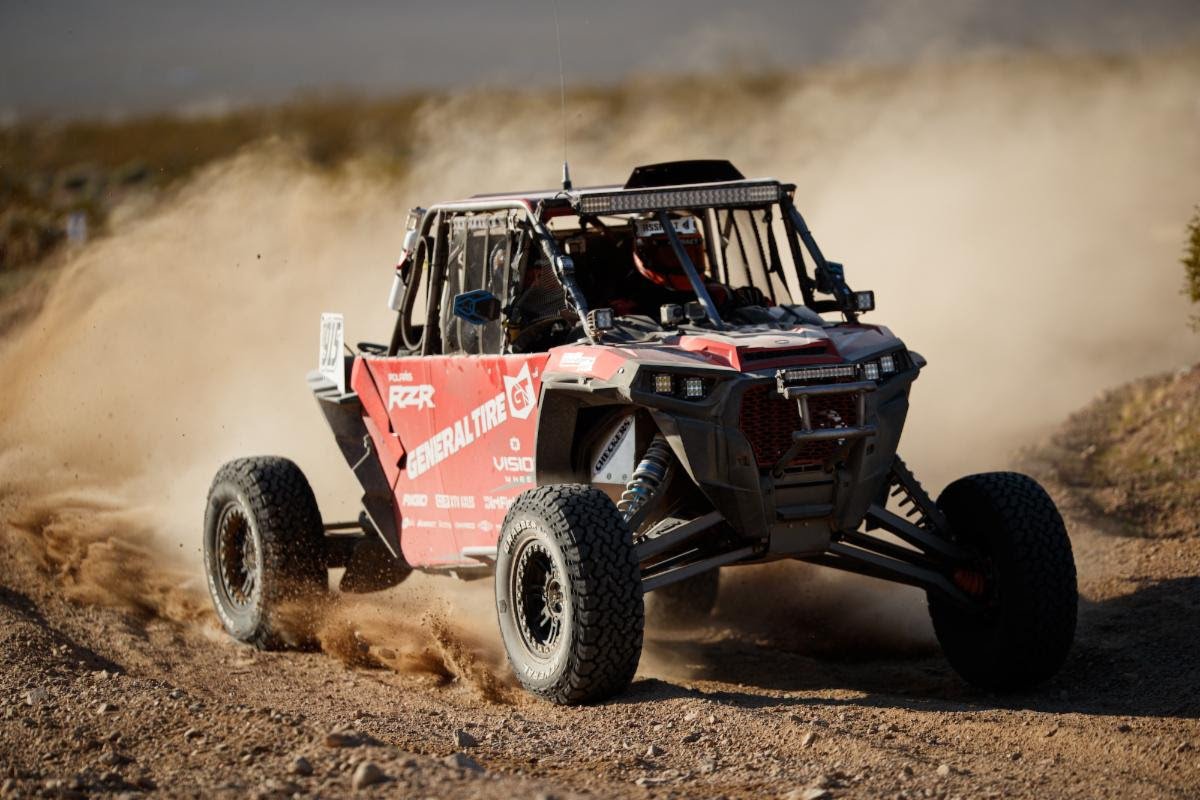 Off-road racing returns to Las Vegas this week with the Mint 400, and with it professional off-road racer and radio host Jim Beaver returns to action in his familiar #915 Polaris RZR in the Pro UTV Turbo class. But this week’s race sees a big change for Beaver’s race program: it’ll mark the first race that General Tire, the new title sponsor of the General Tire Down & Dirty Show Powered By Polaris RZR, also serves as the primary sponsor of his race entry.
“Expanding our long-standing relationship with General Tire for 2020 has been fantastic, and I’m excited to show off our new-look ride for the rest of the year starting with this weekend’s Mint 400,” said Beaver. “Between welcoming them as our new title sponsor for the radio show and making our SiriusXM debut, it’s already been a huge year for us. I’m excited to debut our new look in the Great American Off-Road Race, and hopefully score a big result to keep our momentum rolling!”
Beaver’s 2020 race season kicked off in January with his hometown race, the Parker 250 presented by Polaris RZR. Splitting time behind the wheel with his brother Trent, Beaver and the #915 team fought back from an early mechanical issue to pass dozens of cars over the course of the three-lap race. Despite the initial setback in the running order, the team managed to persevere through a rough course to finish on the lead lap.
In addition to his duties behind the wheel, Beaver will also appear on the live streams for this year’s Mint 400 as a race host. Live race coverage runs throughout the weekend at facebook.com/TheMint400 and can also be accessed via the Mint 400 app on the App Store. He’ll also host a new edition of the General Tire Down & Dirty Show Powered By Polaris RZR alongside Tiffany Stone from the Polaris RZR booth at the Mint 400 Off-Road Festival on Thursday afternoon.
Stay tuned for new episodes of the General Tire Down & Dirty Show Powered By Polaris RZR, Project Action, and more, as well as full coverage of the Mint 400 and all of this week’s action motorsports events on DownAndDirtyShow.com.
Jim Beaver Motorsports is supported by General Tire, Vision Wheel, Polaris RZR, Rigid Industries, GSP XTV Axles, DirtFish, Gibson Exhaust, Optimas Starters, Impact Safety, Acronis, Hyperco, HCR Racing, Pro Armor, Assault, Rugged Radios, and Action Sports Canopies. For more information on Jim Beaver and the General Tire Down & Dirty Show Powered By Polaris RZR, visit www.downanddirtyshow.com, follow @JimBeaver15 on social media, and follow @DownAndDirtyShow on Instagram.
About Jim Beaver
Jim Beaver is a professional off-road racer, nationally syndicated radio host, and TV personality. A 3rd generation race car driver who is currently competing in off-road’s premier Trick Truck division as well as being a factory Polaris RZR driver in the Polaris RZR Star Car. His radio show, the Down & Dirty Radio Show Powered by Polaris RZR, is the #1 motorsports radio show in the United States on iTunes, and is syndicated to 200 AM/FM networks domestically and available internationally on the American Forces Network. He has been instrumental in pushing off-road and action motorsports to mainstream America through various television, radio, print, and online appearances while actively competing in and covering the events. He can be followed online at @JimBeaver15 on Facebook, Instagram, and Twitter. More information on the Down & Dirty Radio Show can be found at www.DownAndDirtyShow.com, or by following @DownAndDirtyShow on Instagram.