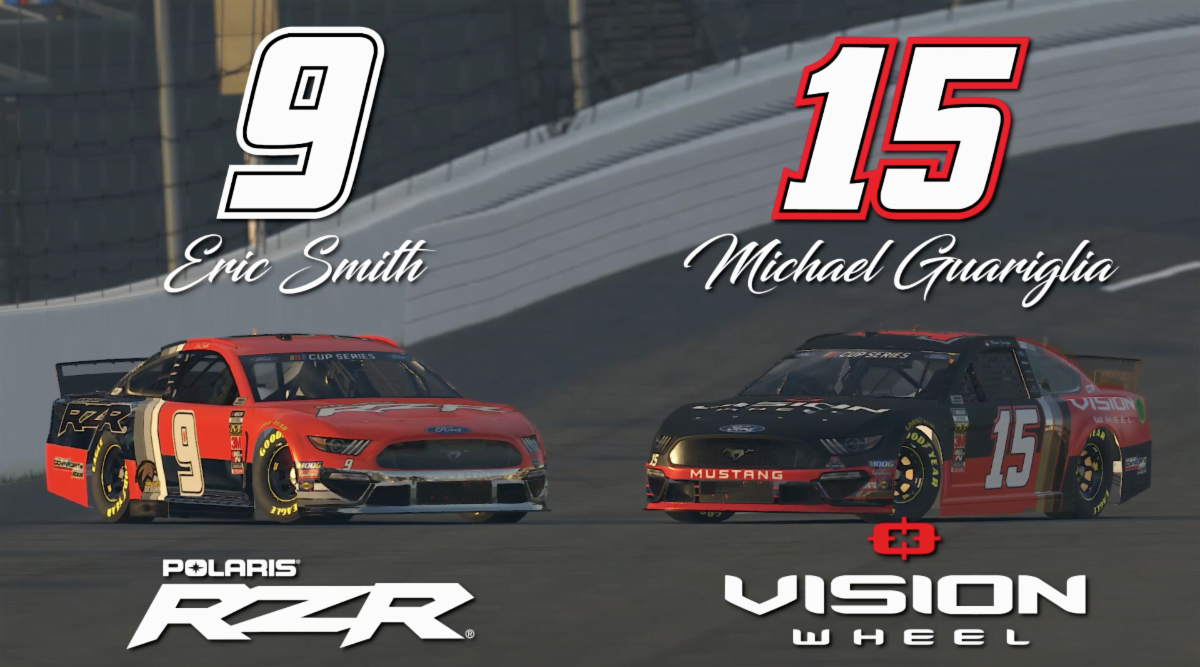 Polaris RZR, Vision Wheel to serve as primary sponsors at Daytona
PARKER, ARIZONA—A new year means a new look for Jim Beaver eSports, which returns to the eNASCAR iRacing World Championship for 2020 with both Michael Guariglia and Eric J. Smith back in the team’s Ford Mustangs. A pair of new primary sponsors will take over for the Charlotte-based friends and roommates, as Guariglia returns to the #15 car with the familiar black and red of Vision Wheel and Smith takes over the renumbered #9 car with a chrome-heavy Polaris RZR look.
“eNASCAR has stepped up its game for 2020, and in turn, so have we,” said team owner Jim Beaver. “Polaris RZR and Vision Wheel are cornerstone partners of my real-world race program, and I’m excited to see them on our eNASCAR Ford Mustangs for Michael and Eric as well. Our new numbers for this year also match my UTV Turbo race number, #915. The result is a program that blends my desert program with the digital world, and I can’t wait to see our new cars out on track for the season opener in Daytona.”
Jim Beaver eSports joined iRacing’s premier world championship midway through last season, drafting former independent drivers Guariglia and Smith to its roster. After both qualified back into the series for 2020, JBeS re-signed both drivers during the free agency period, making it one of just a handful of teams to successfully retain its 2019 driver lineup as numerous big-name team owners came in for the new season.
Alongside Polaris RZR and Vision Wheel, the Down & Dirty Show Powered by Polaris RZR and Acronis will serve as associate partners on both vehicles. Beaver’s weekly flagship radio show airs on more than 200 AM and FM networks across America as well as the Armed Forces Network worldwide. Acronis provides internationally recognized data backup and security services, and joined Beaver’s race program in 2020.
The 2020 eNASCAR iRacing World Championship season kicks off at Daytona International Speedway on February 11. More information on Jim Beaver eSports can be found at www.jimbeaveresports.com, or by following the team on Facebook, Twitter, and Instagram.
About Jim Beaver:
Jim Beaver is a professional off-road racer, nationally syndicated radio host, and TV personality. A 3rd generation race car driver who is currently competing in off-road’s premier Trick Truck division as well as being a factory Polaris RZR driver in the Polaris RZR Star Car. His radio show, the Down & Dirty Radio Show Powered by Polaris RZR, is the #1 motorsports radio show in the United States on iTunes, and is syndicated to 200 AM/FM networks domestically and available internationally on the American Forces Network. He has been instrumental in pushing off-road and action motorsports to mainstream America through various television, radio, print, and online appearances while actively competing in and covering the events. He can be followed online at @JimBeaver15 on Facebook, Instagram, and Twitter. More information on the Down & Dirty Radio Show can be found at www.DownAndDirtyShow.com, or by following @DownAndDirtyShow on Instagram.