The Baja 1000 is the ultimate test for manufacturers of all disciplines in desert off-road racing. Whether it be suspension components, engines, transmissions or full on racecar builders, a win at the legendary Baja 1000 will boast you to the top of the game. In just over twenty-four hours, Justin Davis hammered his #185 JIMCO Truggy through the toughest race, both physically and mentally, in North America from Ensenada to La Paz to take the win in Class 1 (5th Overall). 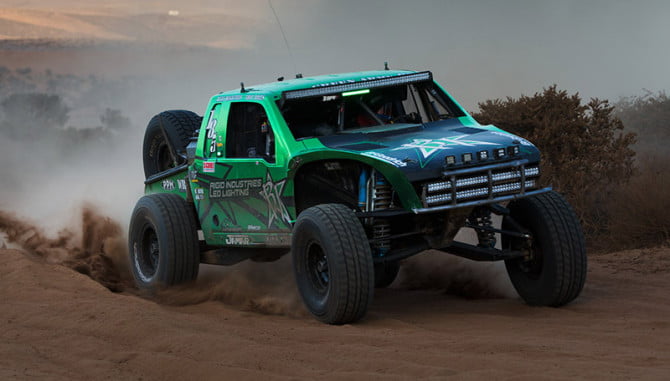 A week prior, Davis qualified second in Class 1 at the SCORE Qualifying event that took place at Las Vegas Motor Speedway during SEMA automotive show. Davis was off the line at 1:07pm on Thursday and finished a little after that time the following day. Davis split driving duties with Scott Schovajsa in the #185 Jimco and strategically handed the truck off to him early in the race. Davis hopped back in the truck at RM 443, where he took the truggy all the way the finish. As racers began to bow out of the race, Davis kept getting stronger and was first to La Paz in a time of 24:31:26.907. The team held an average speed of 52.140 mph, two-tenths off the lead bike pace of Ricky Brabec.

“On behalf of the whole Green Army Team, I would like to thank everyone who has stood behind us in the good times and bad. This win was everything to us,” commented Davis at the finish line. 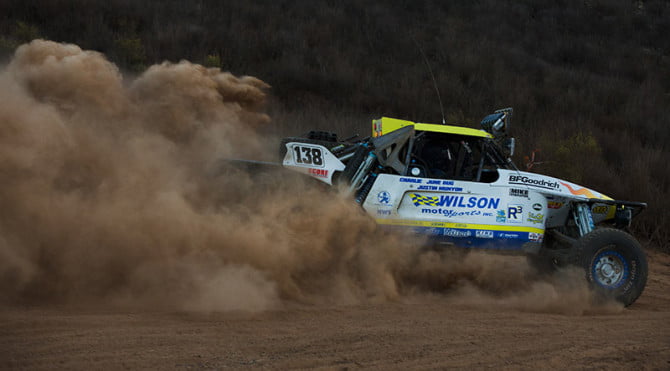 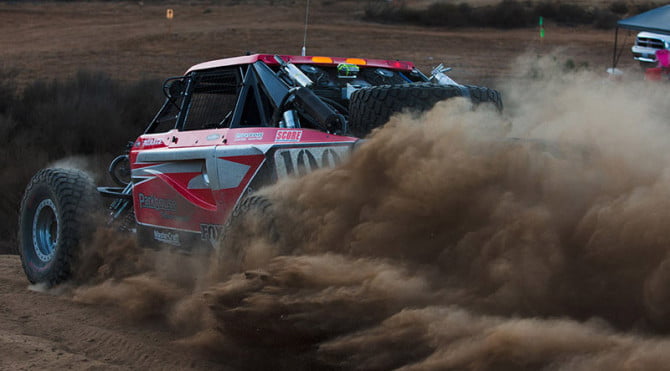 Davis was not the only Class 1 success. Of the nineteen total entries, only eleven finished and JIMCO racers took three of the top five finishing positions. 2013 Class 1 Points Champion Cody Parkhouse and #138 Randy Wilson rounded out the top 5. #147 Pat McCarthy finished a solid 9th place. 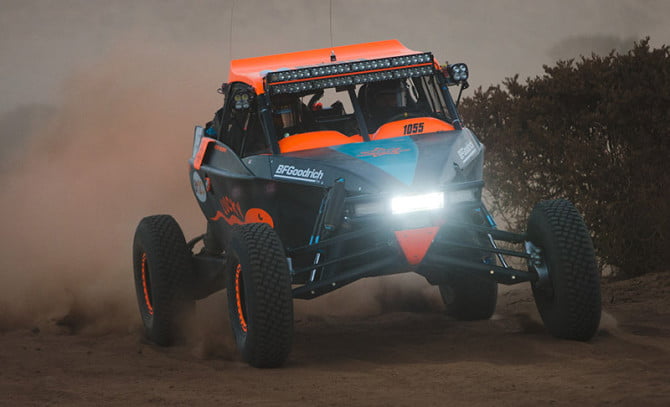 The second most competitive class at this year’s 1000 was Class 10 and JIMCO’s Kash Vessels was in the mix for the win the entire race. Vessels had only raced his brand new JIMCO built #1050 Class 10 at the MORE night race earlier in September and brought it to Baja for its first true test. Ultimately, Kash and teammates Cam Theriot, who drove the middle section, and Andy Grider, who took the #1055 to the finish, made the 1,275 mile journey to La Paz in 27:50:20, an hour off the class 10 top pace. With two races under his belt, car owner Cam Theriot understands the edge that owning a JIMCO adds. “I have owned over 30 race cars in my career and this Jimco 10 car is the nicest car I Have ever owned,” stated Theriot.

Half of the Class 10 racers did not finish, including #1042 Lars Ferry and #1050 John Langley. Thought Langley’s “El Pedrino” did not make it to the finish line, their Baja 1000 is considered a huge success. Langley lost a clutch at RM 1185, only 90 miles from the finish line, after getting stuck in some mud and silt. 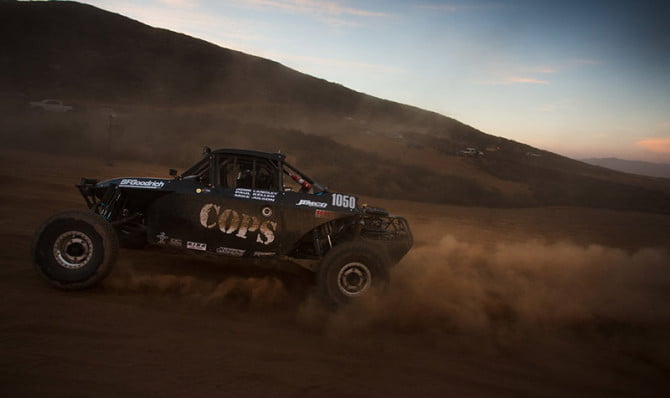 John Langley came to JIMCO to build COPS Racing a brand new Class 10 just three months prior to the Baja 1000 and set a goal to build a new, state of the art Class 10 race car. The race car was only a chassis three weeks from the green flag drop and had only 20 test miles upon completion.

“The tough thing when you do a project like this is we’re talking about going down and racing a race from Ensenada to La Paz over 1,200 miles. We’re virtually going to have zero test time. The first time we drive it might be off the starting line,” commented JIMCO Racing CEO, Mike Julson, months back.

“It’s not only just to prep stuff but it’s to get a brand new car built, as well as everything that goes along with it. From the wiring to the engine to the transmission to the plumbing to the actual communication with the builder. It comes down to gathering parts and getting them expedited to the builder in a good amount of time,” commented COPS Crew Chief Brad Beintema. 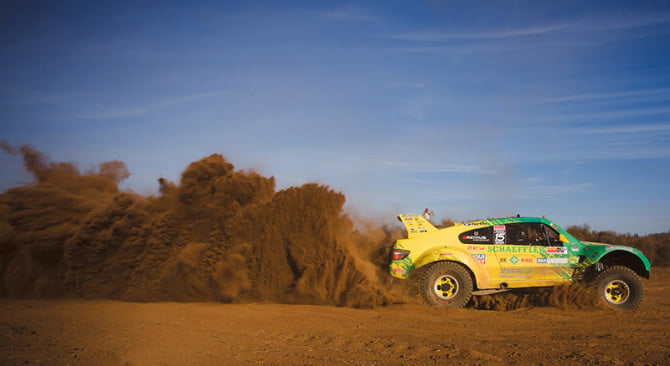 Prior to the Baja 1000, Armin Schwarz and Martin Christensen announced that the Baja 1000 would mark their last race together in the iconic #15 Trophy Truck and Schwarz will chart a new course for the 2015 season. A win last week could have sealed the long-standing and successful partnership between Schwarz and Christensen. Unfortunately, Schwarz suffered a race ending crash at RM 246 that left him and the vehicle shaken up. Thankfully, there were no serious injuries but the team did not see the finish line in their last race together. 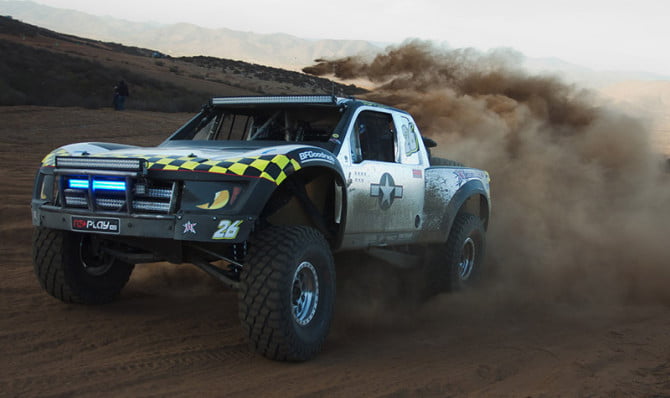 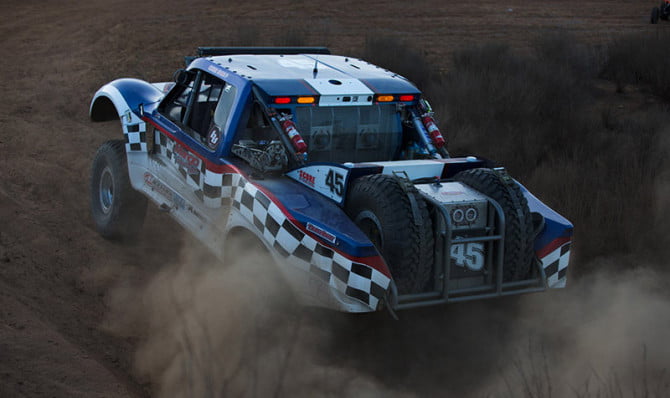 #45 Gary Magness of Mango Racing picked up the slack in the Trophy Truck class and finished a very respectable 9th place in class. From the get go, Charles Dorrance and R&D Motorsports ran in to problems in the #26 “War Machine” that set the team back, including electrical issues after traversing through many water crossings that set them back eight hours. Dorrance initially made some ground on the race leaders but after the down time, it would be near impossible for the team to battle dust and lap traffic to finish in the top 10 after handing the truck off to Jay Reichert.

JIMCO Racing will field dozens of racers at Best in the Desert’s season finale in Henderson, NV December 5-7.

About JIMCO Racing Inc.
Jimco Racing Inc is the largest off-road race car builder in the world. From American desert races to Baja races to the Tatts Finke Desert Race to the Dakar Rally, JIMCO has been manufacturing top of the industry off-road race vehicles since 1975. Twenty time SCORE Chassis Builder of the Year, JIMCO’s Trophy Trucks, Class 1, Class 10, Class 12, Class 1/2-1600, Pre-Runners, Pro-Lite, Pro 2 and Rally Raid vehicles are the industry standard that continue to produce wins and championships across all mediums of off-road.