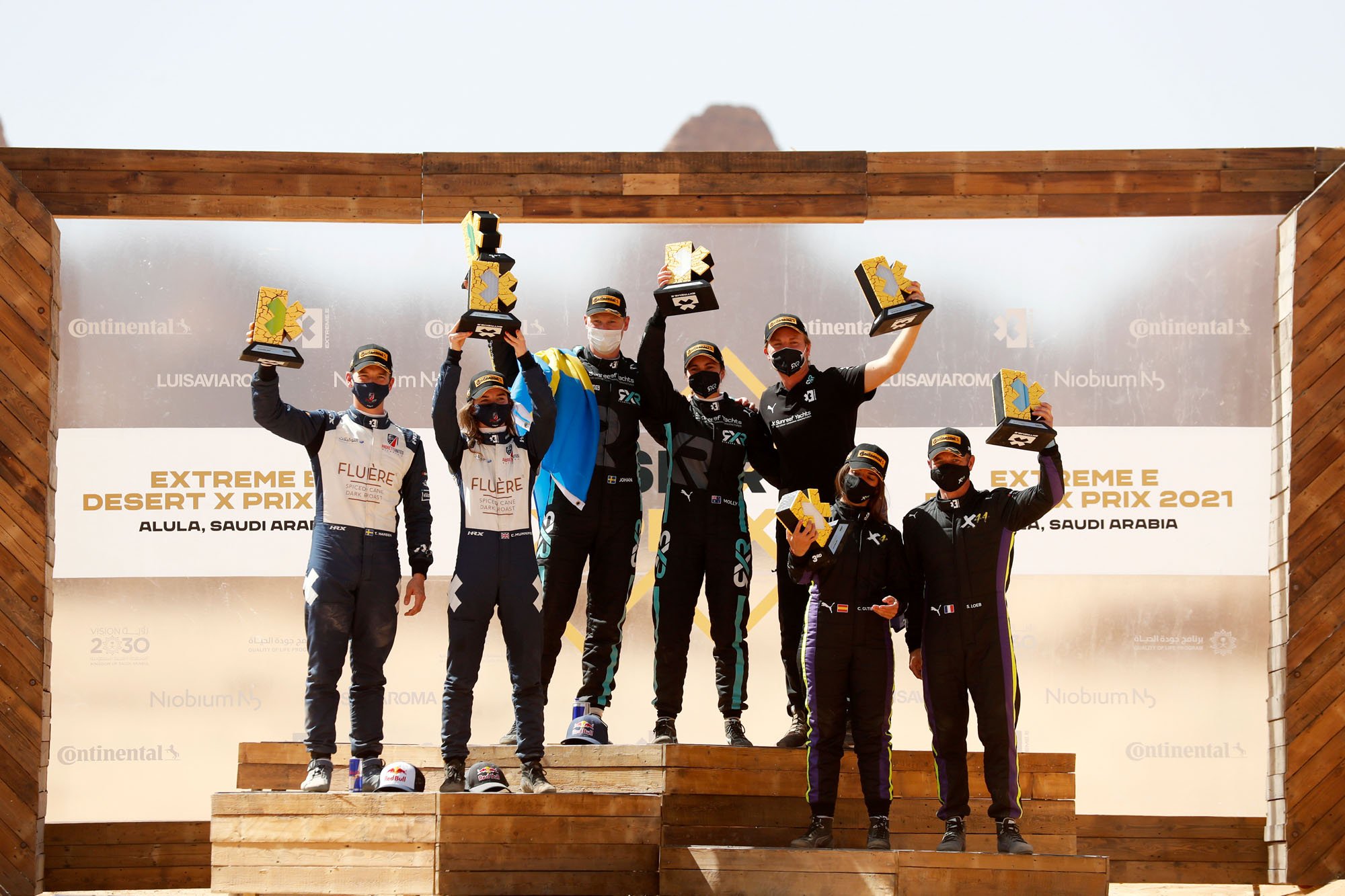 Johan Kristoffersson and Molly Taylor have come out on top after the inaugural weekend of the new Extreme E series; the Desert X Prix in Al-Ula, Saudi Arabia. Here is all you need to know:

– Extreme E is an entirely new global motorsports series, which sees teams of two drivers – one male and one female – compete in Odyssey 21 electric SUVs over five race weekends around the globe. The series aims to highlight environmental concerns, with each of the five events taking place in an at-risk environment and the organisers hoping to leave a positive lasting impact through their legacy programmes.

– At each meeting, there are two days of racing, with two rounds of qualifying on the Saturday, then the Shoot Out, Semi-final, Crazy Race and Final on the Sunday. Each race includes two laps – one for each of the drivers – and championship points are available throughout the weekend.

– First to qualify for the Final at the Desert X Prix were Swedish World Rallycross star Johan Kristoffersson and former Australian rally champion Molly Taylor of Nico Rosberg’s RXR team as they topped the semi-final. Just behind them and taking the second spot in the Final were French nine-time WRC champion Sébastien Loeb and Spanish Dakar stage-winner Cristina Gutiérrez of Lewis Hamilton’s X44 team.

– Coming through Sunday’s Crazy Race to join the Final line-up were British rising rally prospect Catie Munnings and Sweden’s 2019 World Rallycross champion Timmy Hansen, driving for Andretti United. Although they were the last to qualify, Andretti were awarded pole position for the Final after winning a fan vote.

– The first-ever Extreme E Final started with all three male drivers behind the wheel. Hansen was the fastest off the line, but Kristoffersson made his move heading into Turn 1, coming from outside to inside and carrying more speed through the corner. With the e-SUVs kicking up plenty of dust in the desert terrain, visibility soon became limited and Kristoffersson pressed home his advantage.

– The gap from Kristoffersson to Hansen in second was over 30s as the lead car switched drivers at the end of the first lap, with a similar distance again back to Loeb in third. Despite a clean drive from Munnings, Taylor was never really under pressure on the second lap, guiding the RXR car home safely for a dominant win.

– Speaking after the race, Kristoffersson said: “Huge congrats to the team. They’ve done an amazing job to get the car to me and Molly in one piece every time. Also Molly has done a fantastic job, we were so fast in qualifying… we had a small issue, but from there on we had a very good semi-final and final today.”

– The series moves on to Senegal next for the Ocean X Prix on May 29-30, before continuing to Greenland, Brazil and Argentina for the rest of the series.