The action continues in South America, The Peugeots are dominating as expected but they are not free of problems, Toyota and Mini right behind them fighting without any mercy. Today’s stage was cancelled due to heavy floods so let’s recap everything that’s happened since our first recap. 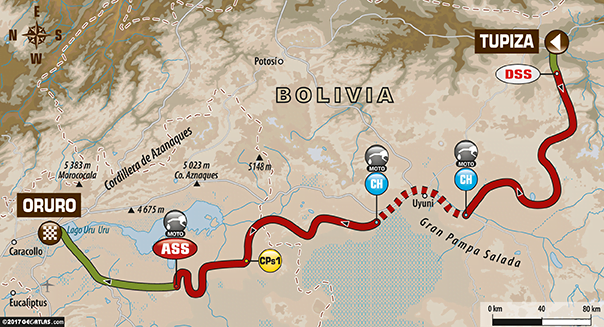 Loeb again!
Sam Sunderland demonstrated his navigational skills to win in Oruro, taking advantage of his rivals’ problems, on a special that was shortened to 219 kilometres due to poor weather. As for Sébastien Loeb, he picked up his second victory this year in the car category at the end of a very risky stage.

Carlos Sainz now out of the race leaves opportunities for everyone else, Loeb using his skills managed to take his second stage win just 44 seconds before the second place of Nani Roma with Toyota, Peterhansel got third just another 50 seconds after Nani. In Bikes the leader Joan Barreda got a penalty for refueling outside the permitted zone adding an hour to his time loosing any chance for and overall victory. 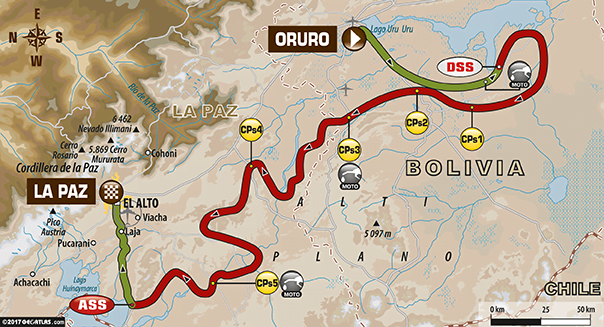 Stage canceled!
Some competitors are still making their way through the special. Extreme weather conditions are preventing competitors and their vehicles from reaching the bivouac and preparing for tomorrow’s stage properly. Furthermore, the scouts sent by the organizers to inspect  tomorrow’s stage have reported the terrain is steadily deteriorating. As a result, stage 6 from Oruro to La Paz has been cancelled.

Shortening stages, cancelling stages are becoming more common this past years in the Dakar rally, the unpredictable rainforest weather of the area where the rally is happening isn’t cooperating which makes the ASO to make hard decisions. As you can see in the video and photos, it was the only decision.

Half way there!
110 motorcycles, 25 quads, 72 cars and 48 trucks – 255 of the 318 vehicles which started in Asunción – made it to the rest day in La Paz. The opening week was marred by extreme weather, resulting in the cancellation of stage 6 and the shortening of stage 5. The slightly altered course has started to separate the wheat from the chaff in the race to win in Buenos Aires. Young riders, with Sam Sunderland leading the motorcycle category, and Peugeot, have gained the upper hand, with the three drivers of the French dream team filling all three slots on the provisional car podium and ready to fight for the win.

Not much to add here, for us usually this is where we walk around the bivouac looking for stories and photos as well as getting some proper rest that is well needed after a week of 3 or 4 hours of sleep daily. As for the teams this is where they have more chance to prep the vehicles as well recover. 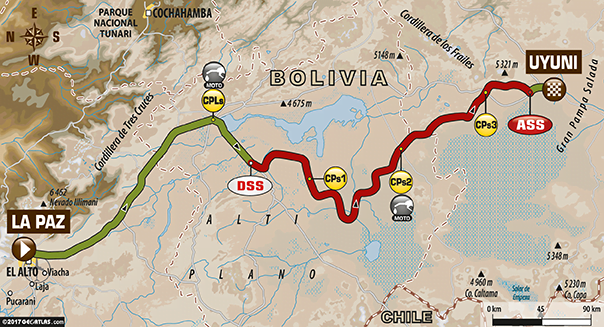 Peugeot army unstoppable!
On the road to Uyuni, Ricky Brabec has won his first special on the Dakar at the end of a 174 kilometre sprint ridden at a devilish pace. In the car race, Stéphane Peterhansel did justice to his rank of general standings leader thanks to a narrow victory over his team-mate Sébastien Loeb.

After some extra sleep, the Dakar continues the journey into the second part of the rally where the pressure starts to happen for some teams, the stage was once more time shortened but the action was not, Peterhansel again with the stage win putting him at top in the general standings just 40 seconds ahead of Loeb, the fight between teammates is on! 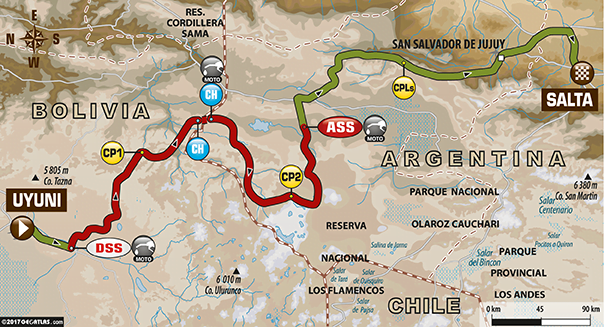 The Weather doesn’t cooperate!
The Dakar left the high plains and headed towards Argentina along a route initially comprising off-piste and crossing of fords combined with negotiating dunes. However, the competitors were once again victims of the weather and the rain of the previous days caused rivers to swell and flood, forcing the organizers to change the route with a neutralized section at the end of the Bolivian part of the special.

Another day, another changes of plans, the stage is significantly modified again but for the racers, specially Peugeot team is another day in paradise taking all three spots of stage 8 podiums, Loeb, Peterhansel and Despres. Mikko Hirvonen and DeVillers are the strongest behind the Peugeots. The rally is back in Argentina leaving behind the high altitudes but the weather doesn’t seems to be changing anytime soon. 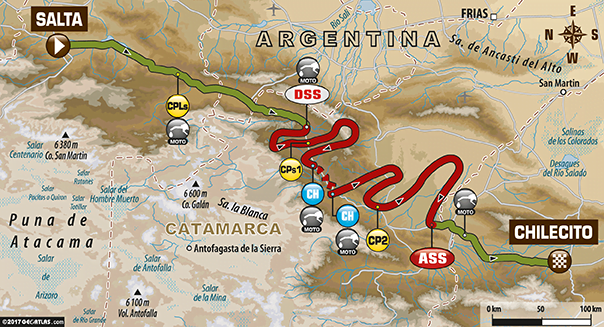 Stage cancelled again!
A massive landslide caused by thunderstorms happened this morning at 10.30am on the road used to join the bivouac, 40 kilometers north of Jujuy, 160kms away from Salta, hitting the village of Volcan. According to the Argentinian civil security, victims are deplored in the population and considerable damage has been observed.

The organization offered its sanitary facilities to reinforce the local safety support on site. As the road is cut off, most of the vehicles, competitors, assistance and logistics from the Dakar caravan were diverted on an alternative route through San Antonio de los Cobres, extending the distance of the liaison by about 200 km. They will not be able to reach the Salta bivouac in time to start the race.
A number of larger vehicles will not be able to use that road either.
The day will be devoted to regroup the race caravan in Chilecito to continue the event by giving the start on the 12th of January of stage 10, between CHILECITO and SAN JUAN.

So far this is what is happening at Dakar rally, only 3 stages remain to the finish line in Buenos Aires, we hope the weather gets better to fully enjoy this beautiful race. Remember to join us in the forum!