‘Taking it easy’ is cross-country rally star Bruce Garland’s approach to the first few days of the 2013 Australasian Safari.

Competing under the banner of Team Toyo and their own company, Isuzu Motorsports, Garland and co-driver Harry Suzuki are sitting in 17th outright of the 23 auto competitors after Leg One of the seven-day enduro in the West Australian outback.

Yesterday provided competitors with sand traps, tricky twisting navigation and rugged terrain in three stages in and around Northampton and Kalbarri, around 600km north of Perth.

“You don’t win an event like this on Day One,” says Garland, who is making a return to racing just two months after surgery for prostate cancer.

“We’re taking it easy, just pacing ourselves. The first stage was on the beach so that was fairly easy, but then we were in and out of the Murchison River and it was very hard and ‘bony’.

“The car’s going well and I’m going well. It’s a very different car to drive to our usual Isuzu D-MAX, so we’re just settling into it. We’ll pick up the pace when we’re ready, after we do a few more adjustments to the brakes, the suspension and the driver!” 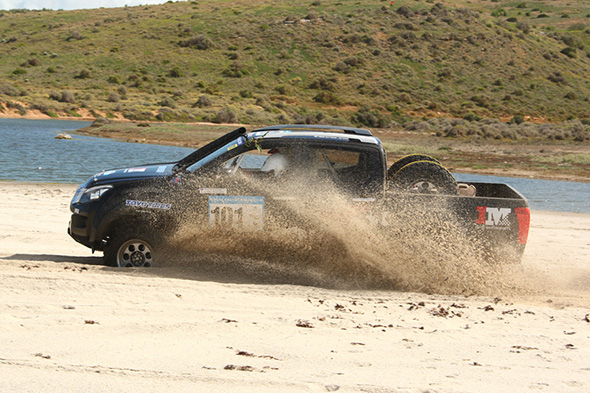 Historically, the Sydney-based crew use the Safari as a testing ground for the Dakar Rally, but with Dakar not on their program for 2014, they have entered an almost stock-standard D-MAX rather than their usual high-powered ‘Dakar spec’ vehicle.

They are competing in the international T2 class that is for 4WD vehicles with minor modifications, basically limited to some shock absorber changes and the fitting of required safety equipment.

As such, Team Toyo won’t be challenging the performance front-runners for outright honours but are optimistic of a solid, reliable run and a class victory.

The 2013 Australasian Safari is in its 28th year. It kicked off with a ceremonial start in Perth and will finish in Geraldton this Friday, September 27, after travelling around 3200km.

Yesterday’s racing travelled through farm paddocks, along the edge of the Bowes River, into Yandi Station and across the Vermin Proof Fence and into rough, rugged and rocky terrain on Coolcalalaya Station. Competitors crossed Murchison River and finished up at Mary Springs Station.

Today, competitors will tackle two long stages of 147km and 288km respectively, heading to Gascoyne Junction, a small town inland from Carnarvon (900km north of Perth) on the junction of the Gascoyne River and Lyons River. At the 2006 census, Gascoyne Junction had a population of 149. It’s a centre for mining, pastoral and desert merino fine wool industries.

Garland and Suzuki are contesting the seven-day endurance race for the 17th time, and have won it five times.