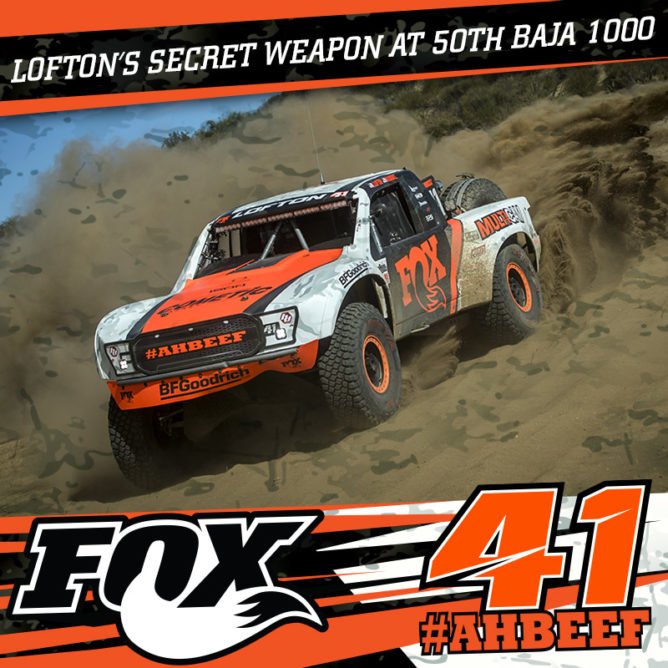 La Paz, Baja California Sur Mexico
The SCORE Baja 1000 is a physical, mental, and logistical challenge unlike any other. On a “Peninsula Run” like this year’s 50th anniversary race, the course traveled 1134 miles. Starting in Ensenada, and finishing down towards the tip of Baja in La Paz, the course contained every bit of brutal Baja terrain imaginable. In order to tackle such a demanding task, Justin Lofton deployed a masterful plan. 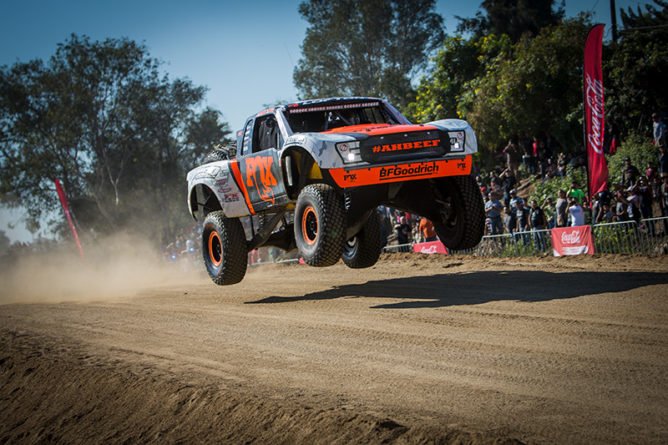 His team and three other Jimco teams would pool their resources to provide pit and chase support for everyone involved. That is far from a new concept but the way they planned it, their crews could take their time, and set up a comfortable pit location. They would be well-rested and mentally sharp when called upon. Justin also brought in Matt Loidice to take a stint behind the wheel with Jorge Lameda navigating. Justin and his co-driver Derek Balcunas would start the race, Matt and Jorge would bring it home. This model is used by many teams, it’s nothing new. 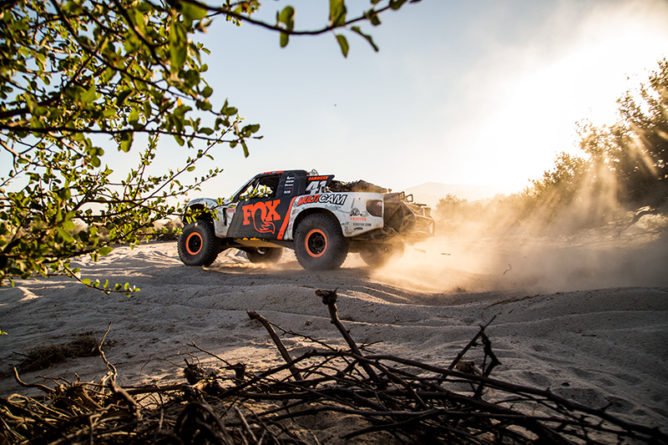 You wonder what is the secret weapon? It’s #AHBEEF tri-tip sandwiches. Tacos are clearly one of the reasons why everyone loves Mexico, but they are difficult to eat while skipping across the whoops at breakneck speeds. Spending hours at a time in the FOX, MultiCam, #AHBEEF Jimco Trophy Truck, one tends to get hungry. Proper nutrition, especially when it’s so delicious, is also an important part of the plan. When asked what the technique is while wearing a full face helmet, do you come in from the bottom, or over the top of the face guard, Justin replied that it depends on the size of the bite you are taking. 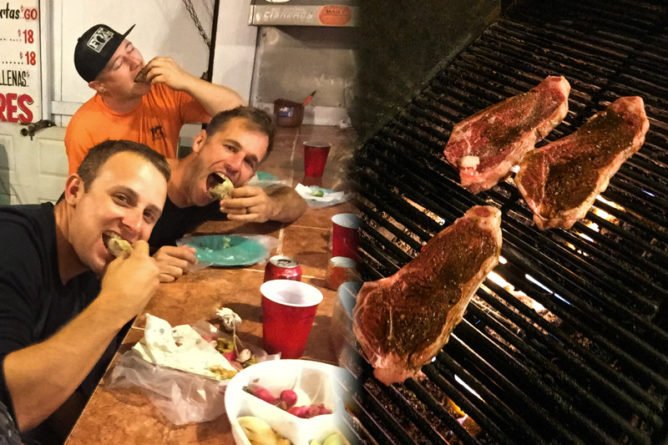 “Derek and I started on a supplement plan months ago and trained hard to be physically fit for the race,” said Lofton, “We have worked hard to get our FOX, MultiCam, #AHBEEF Jimco Trophy Truck dialed in this season. With that done, we turned our attention to fitness, and logistics. Logistics are all about having the right people and right supplies at the right place.” 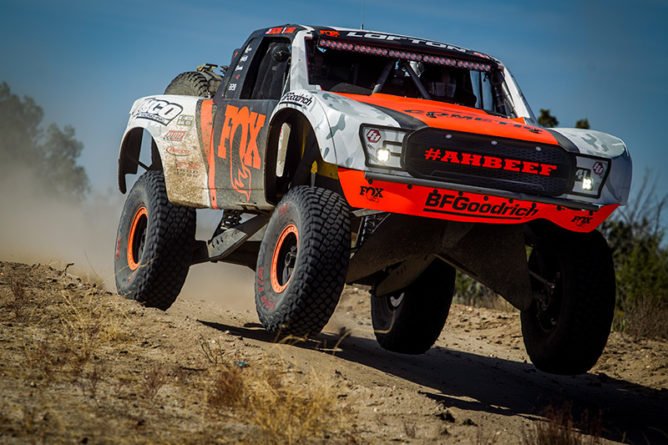 They had a couple glitches but overall it went well. They stopped for a flat tire and got some assistance from some fans. Later in the race they went to change another tire, and discovered the lug wrench was missing and one of the lugs was stripped. Either the wrench fell off, or it was accidentally left off the truck when they took off. Luckily, one of their other Jimco team’s chase truck came by and helped them change it. At race mile 440, Justin got distracted by a motorcycle on the course, and smacked into a big rock. The impact nearly ripped the steering rack off the mount. They limped the truck until they came upon the guys from Terry Motorsports who had a welder. Using Baja engineering, they welded the bolts into the mount to get the rack back in place. 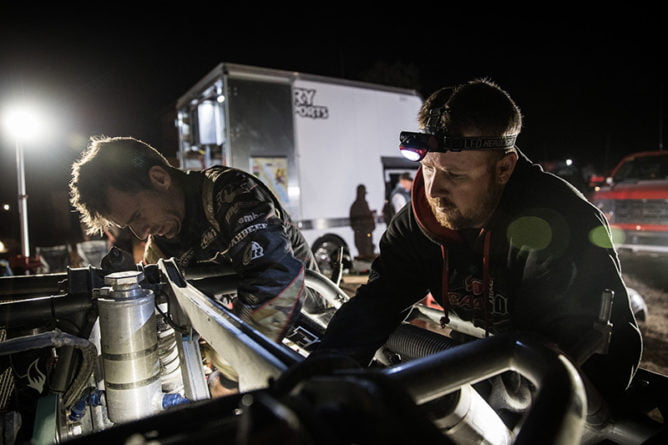 “After some minor problems, we had a good stretch where we could really open the truck up,” said Justin, “We did not have time to do a full prerun of the course because we had a baby in October. The course was very different by the time we saw it during the race. We lost some time in some of the big washes because the faster lines got developed after we preran. 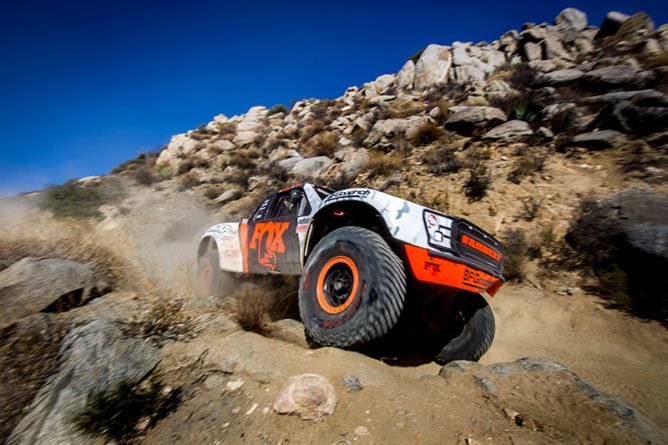 I have a good sense of direction and keep long distance visuals but you can find yourself off on the wrong track when you haven’t run that section for several weeks. We would rather win the race, but you have to take pride in all the battles won along the way. We know what we are capable of after the thousand, and can’t wait for next season.” 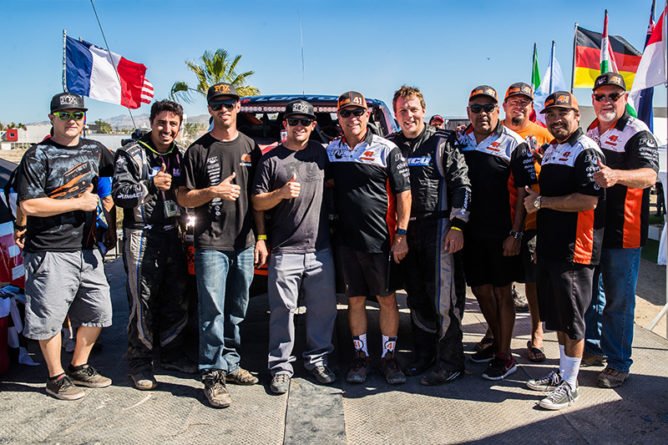