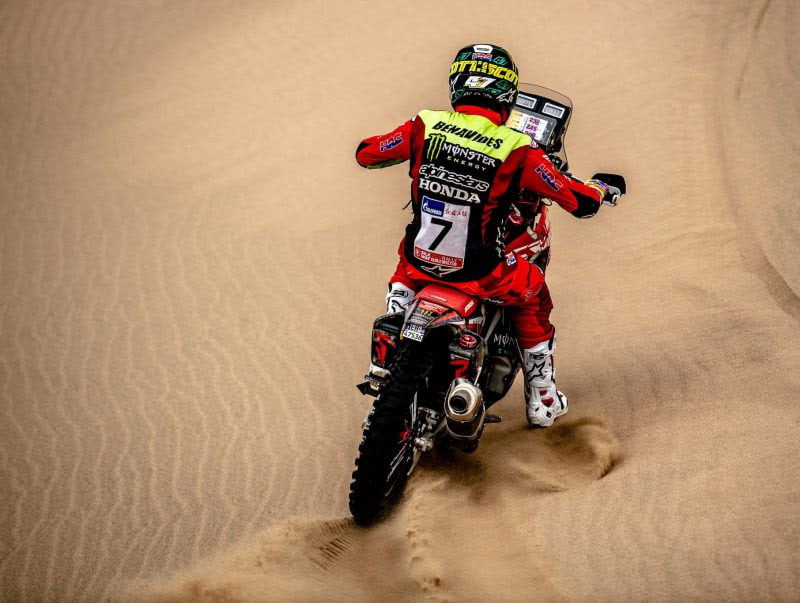 Stage eight of the Silk Way Rally, on its maiden Chinese outing, proved to be one of the most challenging to date. Monster Energy Honda Team pitted their wits against a variety of terrain types including hard ground, open track, sand and the highlight of the day – the first measure of sand dunes. Before the competitors made it back to the bivouac in Alashan, they had to negotiate a liaison section of 430.37 kilometres, the 326.6-kilometre special, followed by another 29.14-kilometre link section.

It was just the kind of ground that suits Kevin Benavides, who finished the special in first spot, recording a time of 4:20.37. The Argentine looked clearly at ease on terrain similar to the type of ground that he habitually trains on in South America.

Kevin’s team-mate at Monster Energy Honda Team, the Chilean rider Nacho Cornejo was likewise having a notable eighth stage posting fourth on the day. Joan Barreda looked comfortable too. After hunting down the two riders that had set out ahead of him, the Spaniard opened the track for a large stretch of the special. In spite of the handicap, the Spanish ace claimed sixth place on the stage.

Tomorrow sees the third-from-last stage of the rally between Alashan and Jiayuguan. It will feature a total of 501.2 kilometres, including 290.30 against the clock. Riders will be tackling the spectacular yet imposing Gobi desert.