King of the Hammers might not have the same history as Crandon or the Baja 1000, but in ten short years this event has gone from being a bunch of rock crawlers banging along through the desert to one of the premier events in the off-road world. Promoter Dave Cole and his dedicated staff have grown this event to host over 30,000 spectators and hundreds of race teams, and they do it on public land in the United States. Designated spectator areas let fans see the action up close and personal, with competitors literally driving over each other in an effort to win the race. Back in Hammertown at the podium there is a Jumbotron with a live feed from the course and professional announcing by Chad Ragland and Ricky Johnson. All of this costs money, but the investment has paid dividends. If Hammerking was publicly traded, this race would be like buying Amazon stock ten years ago. 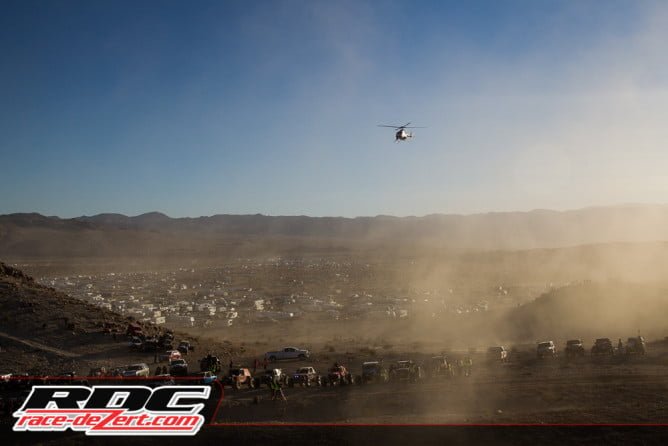 The event started on Sunday with the King of the Motos race, pitting riders from different disciplines ranging from enduro to supercross to trails against each other. The format races through the desert in the morning, then has a land rush start into the rocks in the afternoon that is as crazy as it sounds, complete with crashes and chaos galore. In the end Cody Webb won for the third time, besting Taylor Robert through the wind and rain that pummeled Johnson Valley on Sunday. 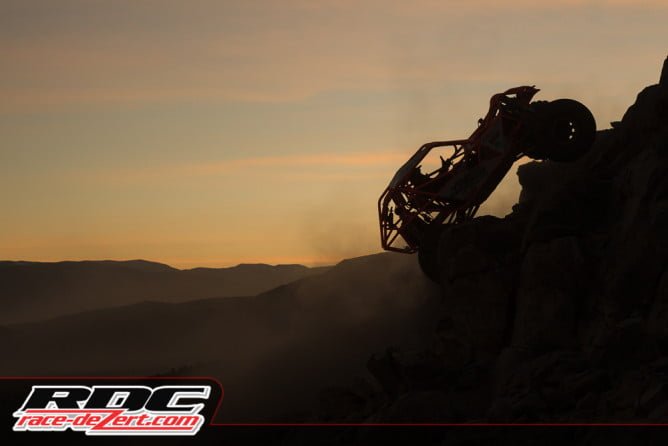 Qualifying was held on Tuesday and Wednesday, along with a “Last Chance Qualifier” for teams trying to get into the main race. Unlike most desert races where entries are only limited by how many people sign up, King of the Hammers limits the race to approximately 100 entries, with teams qualifying through Ultra4 events throughout the season. At the end of each day of qualifying, “Power Hour” hosts the biggest names in the sport during prime time. While racers like Roger Norman and BJ Baldwin have tried their hand at KOH, this sport now has its own heroes with names like Healy, Campbell, and Slawson. 2009 winner Jason Scherer set the fast time in qualifying, putting him on the front row for Friday’s race. 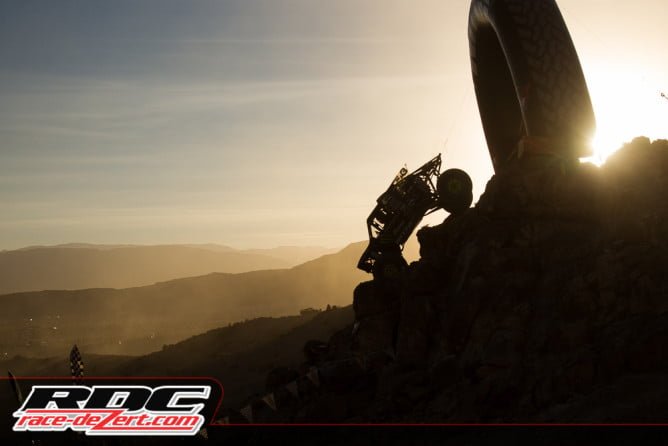 Wednesday also saw the Polaris UTV race, where several big names arrived to do battle with six time champion Mitch Guthrie. Rob MacCachren, Robby Gordon, and Erik Miller all entered the UTV race. In fact, Gordon led an Arctic Cat team that also included Sheldon Creed and recent Dakar quad winner Marcus Patronelli amongst it. These guys have recognizable names, but when the checkered flag came out it was UTV veterans Blake Van de Loo and Branden Sims that were at the front of the standings. Van de Loo backed up his 2015 Baja 1000 victory with a win at KOH, and Sims had to play bridesmaid yet again. Not only are there more talented drivers in the UTV ranks now, but the vehicles are getting better as well. In the past only a few competitors were able to complete the course in the allotted time, but this year nearly a third of the field crossed the finish line. 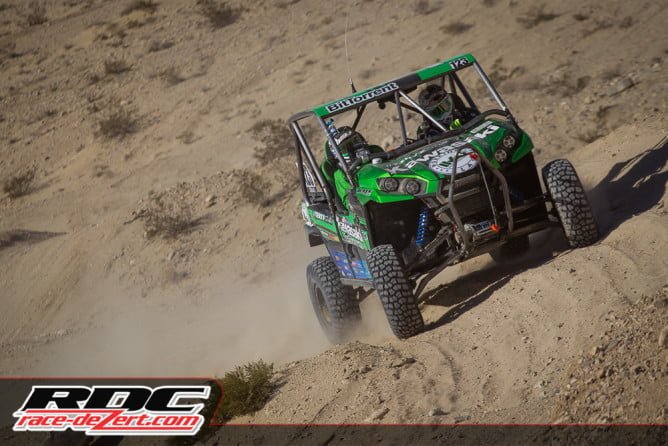 Thursday was the “Every Man Challenge”, with the Stock Modified (4600), Stock (4700), and Legends (4800) classes racing at the same time. Now in its fifth year, the EMC actually had more entries this year than the main race. Unlike the unlimited 4400 class, these classes have very specific rules regarding steering, suspension, and tires that really evens the playing field, making it a true drivers’ race. Given these circumstances, it isn’t surprising that Brad and Roger Lovell won the Every Man Challenge in their ten year old Ford Ranger buggy. While some have built new vehicles for the “Legends” class, the Lovells epitomize the spirit of this class. Jessi Combs won the Stock Modified class behind the wheel of the Currie Jeep that has dominated the 4600 class since it was built. And Matt Peterson and his Grand Cherokee were repeat winners as well, and the only finishers in the Stock Class. Did we mention that this race is hard? 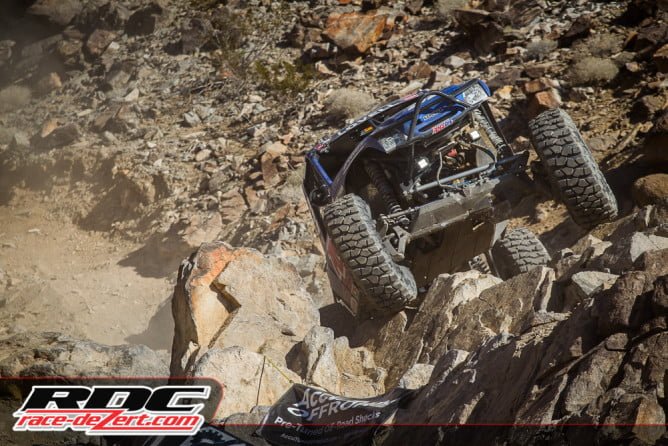 Even with huge V8s and 40-inch tires, less than a third of the field finished the main race on Friday. The course was actually shorter this year than last (170 miles versus 210 miles) but no less brutal. The format was the same, with a long desert loop followed by two rock loops that got progressively more difficult with added rock trails on the third lap. This format allows the fast teams room to get to the front of the pack, even if they qualified poorly. Such was the case for Randy Slawson, Erik Miller, and Tom Wayes, who started 23rd, 27th, and 95th respectively. After the first 50 miles of desert all three of these guys were in the top ten on course, proving that qualifying position isn’t critical to winning King of the Hammers. 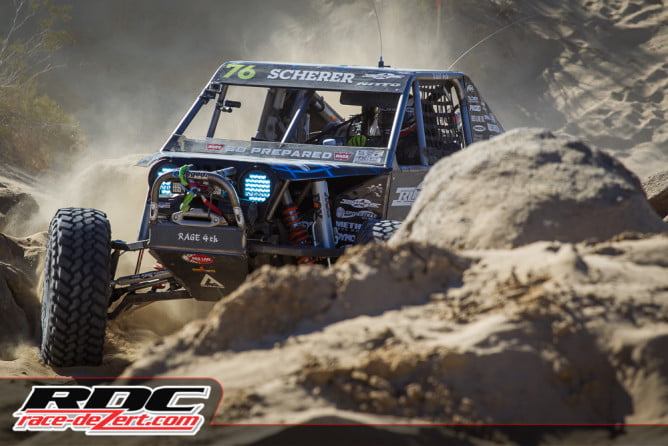 Rob MacCachren finished 13th, but while he is accustomed to being on the top step, Rob Mac was just happy to finish KOH at all, this was his first finish after three attempts. Only 30 of the 104 starters finished the race in 2016, which is still nearly twice as many as last year. And even they have problems. Don’t let the mileage fool you. Just because this race is shorter than the San Felipe 250 isn’t to suggest that it is easy. Erik Miller encountered minor problems and also had to winch on multiple occasions. Jason Scherer battled cooling issues, but never gave up and managed to finish in second place. In the end, 2012 winner and last year’s runner-up Erik Miller won the race with a comfortable lead over Jason Scherer. This is the third year in a row that King of the Hammers has been won by a past winner, suggesting that only a small handful of racers have the package necessary to succeed at KOH. Will we see the first three time KOH champion crowned next year or will a new winner emerge? We cannot wait to find out.

E
Ernesto Araiza
Matt Peterson won the stock class? I don't think he even raced this year. Brian Behrend was the only one close in stock and he missed the time cutoff by about 10 minutes. And since we are talking about stock they are 4600 and the modifieds are 4500. There was no 4700 this year (previously spec class for two years).
GUYS, GUYS - THANK YOU DAVE COLE, ALL OF THE KOH STAFF AND VOLUNTEERS THAT MADE THIS EVENT HAPPEN(AGAIN) !!!!! CAN'T WAIT FOR NEXT YEAR !!!! THANKS AGAIN.