The King Shocks sponsored unlimited class 7 truck was driven by seasoned driver, Andrea Pathiakis who along with her co-driver Athena Kepler drove over 100 miles, completing 4 laps of the course. Starting second, Pathiakis quickly chased down the first 7 unlimited truck to leave the line as well as a number of other competitive cars from other classes.

The girls drove at a smooth, fast, and calculated pace, which proved to be the winning combination. The team nearly had a race ending incident in the beginning of lap 3 when a 1400 class driver veered sharply to the left coming into contact with 7212’s passenger door and bedside. Despite the massive amount of body damage to the race truck nobody was injured. “We were down for about 30 minutes while getting the trucks untangled safely, said Pathiakis, I also took some time on the radio with my team to verify that our axle was not broken before we continued. Without a doubt I was not stoked after the contact but I guess that’s racing. Overall, it was a successful day.” 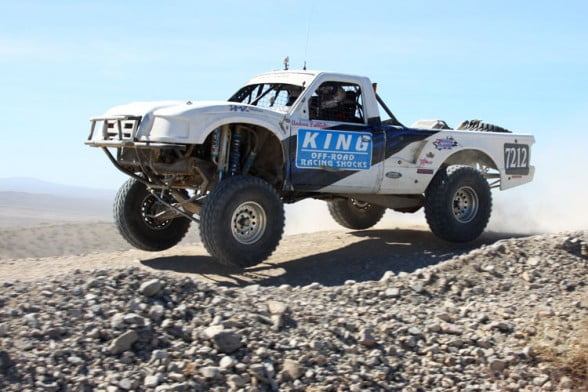 Aside from the accident, the team had a flawless race with no repairs or flat tires to contend with unlike the many other competitors stopped on the side of the course waiting for their support crews to make repairs.

Andrea and Athena were ecstatic after taking first place, coming into the pits Andrea revved the motor in joy as if she had just won over-all at the Baja 1000. “The truck ran perfect, I could not be any happier. I held a consistent speed, and picked my lines perfectly. The transmission ran cool, our new Goodyear tires gave us great traction with no flats on this brutal Barstow course and the King 3.5 inch shocks proved to be a huge part in keeping our speed up so we could stay on top of the huge holes, said Andrea. What a way to take the checkered flag!”

MORE has put together the Powder Puff Race for the Cure for five years now and each year has become more and more successful. Half of each entry fee from the nearly 200 female competitors is donated to Cedar Sinai Hospital for breast cancer research. Donations have totaled over $100,000 in previous years. This years total donation amount is still being counted but it should be respectable thanks to a large, $50,000 donation given to MORE by event sponsor Royal Purple Synthetic Oils along with several other others coming from some of the biggest names in off-road racing. 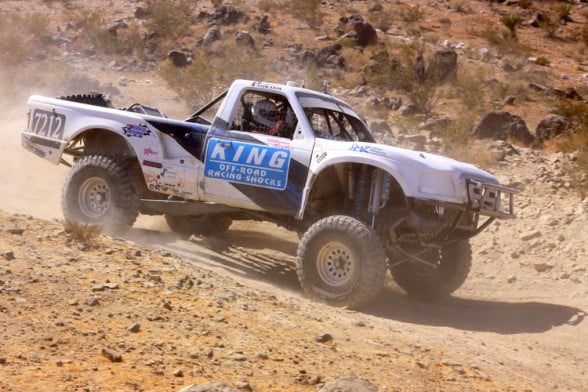 This event brings together successful drivers, teams and thousands of their friends and families to support a great cause that will hopefully help Cedar Sinai find a cure for breast cancer.