After days of hardcore racing action in Johnson Valley, California, the main event at the 2021 Optima Batteries King of the Hammers presented by Lasernut was the 4400 class racers competing on Saturday. They would have to deliver something very special to eclipse the amazing action that had been taking place all week; and they did. I don’t know how Dave Cole, and his team can keep coming up with tougher courses, but Johnson Valley seems to deliver whenever asked. The cars are getting so capable that it’s not an easy task. Not only were the rock trails dug up, and littered with loose boulders, but the so-called easy sections in the desert were rutted, filled with rocks, and whooped out. The whoops were massive everywhere. Even the braking bumps three feet deep. 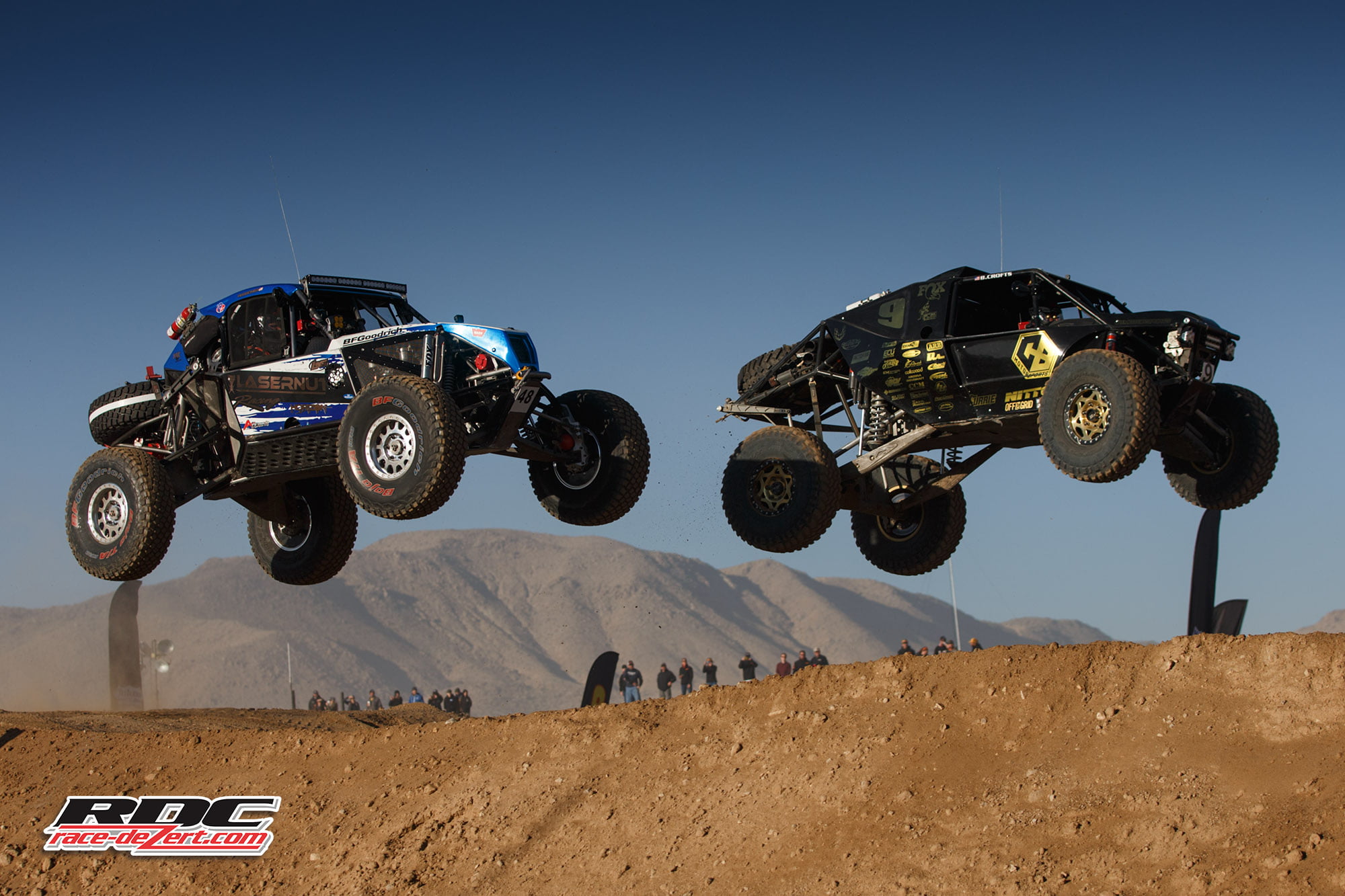 Lap one was a big loop through the desert. The course went into the Marine Base, then to Cougar Buttes, up to the top of Lucerne Valley, and then back to Hammer Town; around 90 miles in total. Lap 2 headed back out past Back Door (which every competitor would have to climb once during any of their 3 laps), and up towards the marine base; turning right instead of heading left as on lap one. Going down Spooners, and up Outer Limits were only a warm up as they still had to climb up Wrecking Ball, Sledgehammer, Jackhammer, Idle Issues, Bender Alley, and Hells Gate. They would have gravity assisting them as they descended Claw Hammer, Chocolate Thunder, Her Problems, and Jack North. They would do much of the same trails on lap 3 with the addition of a new one called Kings Grave Yard which has rocks bigger than the cars, and is very steep, Nightmare, and finally the trail named Hell to pay. The long first lap out in the desert is to give the cars a chance to spread out before they reach the rock trails. The faster drivers typically get ahead of the slower ones which gives the first indication of who the contenders are for the win. When they made it back to the main pits in Hammer Town, it was JP Gomez (who started on the pole), Jason Scherer, and Cameron Steele. Scherer’s crew removed the fiberglass roof sections of his New Ford Bronco body while they fueled the car. Gomez was out first, followed by Scherer, and then Steele. Gomez took this opportunity to run Back Door with Steele, but Scherer passed it hoping to build a gap; which he did. As the pack made it into the first rock sections the running order was fluid. Tom Wayes had already rolled at speed in the desert; taking him out. Loren Healy had to stop for repairs. Wayland Campbell climbed into second. Cameron Steele, and Wayland Campbell were trading second place back, and forth. Scherer had a good margin out front, but then cut both rear tires squeezing through a gap in the rocks. He had to stop and throw his only spare on one side, and run with the other side still flat. One change made by Dave Cole this year was to not use remote pit 2. That meant teams had to make it all the way back to Hammer Town from the rock trails without assistance. Scherer actually went up 2 rock trails, and back towards main pit on a flat tire. He was still leading, but that’s when his day went sideways. Unbeknownst to him, a malfunction of the fuel nozzle in his pit prevented a full load of fuel after lap one. On his way back to the pits while still nursing a flat, he came to a stop 2 miles from Hammer Town with an empty fuel tank. His co-driver Jason Berger (who does CrossFit), ran all the way to the pits, and then hiked back with a fuel jug to get them going again. Although they kept fighting, the win had all but slipped away. Steele had taken the lead with Wayland behind. Also in the mix were the Gomez Brothers JP, and Raul, Bailey Cole, and Randy Slawson who had climbed all the way to the lead pack from the 29th starting position. As time passed, more drivers were having issues. The waterfall on Sledgehammer, one of the original Hammers trails, was causing a bottleneck as most had to pull winch line to get up, and over. Shannon Campbell was seen working on his front end. Then Wayland had his own issues. On the final lap, Cameron Steele had a good lead on the rest of the field with the Gomez Brothers, and Randy Slawson dicing for 2nd. As Steele went down the new trail called Kings Grave Yard, he lost drive to the front end. His big lead was evaporating as he struggled to winch out of what looked to be an impossible situation. He had huge rocks all around, and was in a pit filled with loose sand that was swallowing his car. He made it out, but only to break his steering in the process. This left everyone wondering who would be coming down the trail next to capture the lead. As the whole world watched on the live feed, it was Randy Slawson who emerged through the huge boulders first. He had beaten the Gomez Brothers up Sledgehammer. We all watched as he sliced through Kings Grave Yard with the precision, and momentum he is known for. All he had to do was get up Hell to Pay, and then make it back to Hammer Town for the win. It must have been heavy on his mind as he had passed everyone last year when his rear axle broke; taking him out. Slawson built a big gap back to JP Gomez who started on the pole. Not only would JP need to catch, and pass him, but then put 15 minutes on him just to tie. Slawson, and co-driver Dustin Emick could afford to run a conservative pace through the desert, and cruised into Hammer town for the win. He won by about 14 minutes over JP Gomez who finished 2nd. His Brother Raul was 3rd; a great result for Gomez Brothers Racing. Bailey Cole was 4th, and Vaughn Gittin Jr was in 5th. He was the first Bronco to finish; ahead of his Teammates Scherer in 11th, and Healy in 14th. 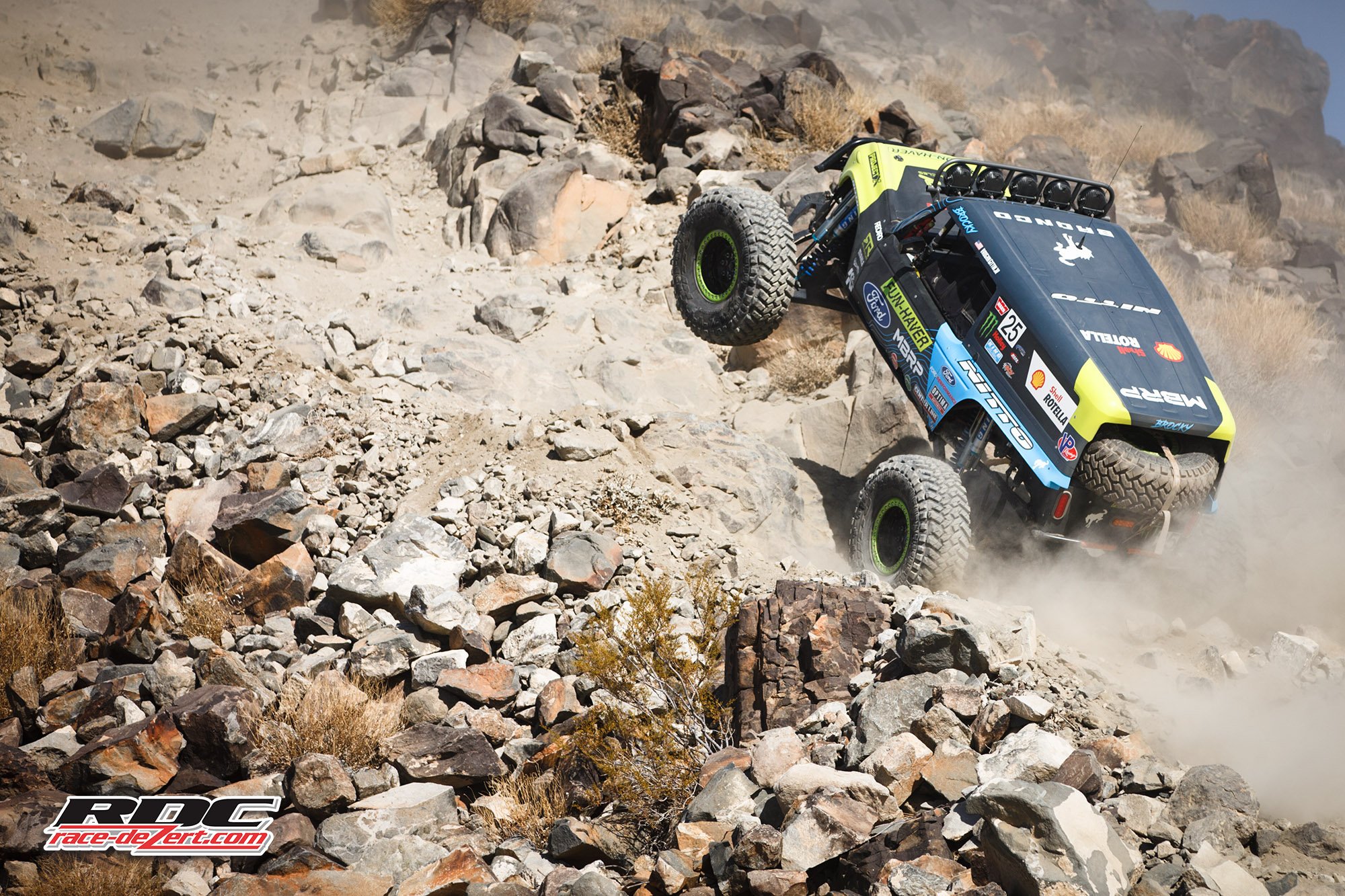 It seemed cruel for Steele, but that’s the nature of King of the Hammers. You never know what might, and often does happen. He made a statement; as did the Gomez Brothers, and Bailey Cole. Another result that got people’s attention was the Can Am UTV’s. They ran with the big boys, and did extremely well. Kyle Chaney won the B2 vs B3 Grudge Match on the previous Saturday, then the Can-Am UTV King of the Hammers race on Thursday. He also finished 12th during the 4400 race. His Can Am teammate Hunter Miller was right behind him in 13th. Teammate Cody Miller also finished the race in the 22nd position. Randy Slawson’s convincing victory gives him his third King of the Hammers crown, but it’s actually his 4th win. He was codriver to JR Reynolds during the O.G. run back in 2008. The duo took the win that day. It was the race that started King of the Hammers. He joins Jason Scherer, and Shannon Campbell as the only 3 time King of the Hammers winners. In addition to the scepter, crown, and bragging rights, Slawson got a check for $65,000 from Ultra4, an $8,000 dollar bonus from King Shocks, and a brand new Bronco from Ford. With no Broncos even being available until this summer, he may be one of only a very few in possession of one. He probably won’t have much time to drive it as the phone will be ringing off the hook even more than it is now down at Bomber Fabrication, his shop. Not only did Bomber win the 4400 class, but Chayse Caprara won the 4WP Everyman Challenge in a brand new Bomber car. It was an incredible week of racing at KOH, and everyone who could attend had a great time. Ultra4 did all they could to make sure it was a safe environment for those in attendance. Everyone who went through the gates got tested, everyone was masked up, and those most at risk stayed home. The quality, and quantity of action shown on the live feed set the standard for live motorsports coverage, so those at home didn’t miss much of the racing. Dave Cole has a lot to be proud of, but he may not be happy. This year’s course was absolutely brutal, but there were still lots of teams that survived to the finish. His goal was to make it more difficult than in 2020, but the strength of the teams was even greater. Who knows what he, and JT Taylor will come up with next year to make it even more demanding?

Stoked for Slawson but man what a gut wrenching end to a pretty great week.
Good Grief

Slawson does it again!

nimrod said:
Stoked for Slawson but man what a gut wrenching end to a pretty great week.
Click to expand...

Yep I thought Cam and Wayne had it in the bag! It was heart breaking to see the 3 wheel drive turn to only rwd.

That being said super stoked for Randy, much respect! This race is won in the desert and lost In The rocks you can never count a straight axle out!
"The strongest reason for the people to retain the right to keep & bear arms is, as a last resort to protect themselves against tyranny in government." Thomas Jefferson

Which, by the way, is exactly what Dave Cole predicted.

stephenrjking said:
Good article, but I feel like the headline could pop a bit more with vivid wording like "Steele is buried in King's Graveyard" or "Slawson buries Steele in King's Graveyard for the KOH win." Something like that.

Which, by the way, is exactly what Dave Cole predicted.
Click to expand...

Next time I'll ask you first.