KTM and Toyota teams talk tactics ahead of 2018 Dakar Rally 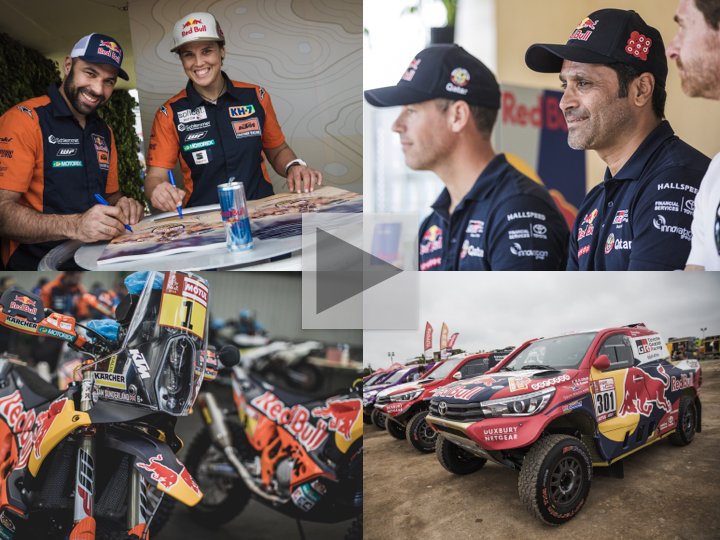 Al-Attiyah’s Toyota Gazzo Racing SA team-mate Giniel De Villiers is also serious about chasing another Dakar title. Al-Attiyah and De Villiers will race their Toyota Hiluxes alongside soccer supremo André Villas-Boas who is taking a break from the beautiful game to fulfil a lifelong ambition of racing the world’s toughest rally.

Qatar’s Al-Attiyah and his French co-driver Mathieu Baumel know exactly what it takes to win the Dakar and the pair are targeting a strong start on the Peruvian dunes. When the rally gets underway this Saturday it will be out into the desert for five unforgiving stages on almost exclusively sandy terrain. Al-Attiyah and Baumel have a hard earned reputation as the best dune racing duo around and they will be looking to make that advantage count in the first week of the race.

“The first week promises to be crucial and the crew who comes out with a good lead will already have taken a big step towards the win.” – Nasser Al-Attiyah

South African De Villiers and German co-driver Dirk Von Zitzewitz have been heavily involved in the testing and development of the latest iteration of the Toyota Hilux. Adjustments include revised weight distribution as well as new BFGoodrich tyres, plus the car has shed 80 kilograms and suspension travel has increased by three centimetres.

“I cannot wait to start because this new Hilux is a big step forward.” – Giniel De Villiers

There’s been plenty of buzz among race fans and fellow competitors to see how Villas-Boas will cope with swapping the dugout for the bivouac. Well, it’s so far so good for the Portuguese Dakar rookie as well as his co-driver and fellow countryman Ruben Faria. With every Hilux entered into this Dakar safely through all of the pre-race technical checks it’s now time to focus 100 percent on the road ahead.

Faria’s extensive navigation experience picked up during his successful motorcycle career will be a major plus for Villas-Boas. Another benefit is the physical conditioning advice he has taken onboard from his physios and fitness staff that have assisted him at his various football clubs. The Dakar debutant is also extremely proud to be representing the three charities for which he holds an ambassadorial role – Laureus, Ace Africa and APPACDM Porto.

“Lots of people are tuning in to see what’s happening so it’s a great chance for me to raise awareness for these good causes.” – André Villas-Boas

Check our ABC guide to the Dakar Rally

Villas-Boas was originally up for racing a bike at the Dakar but his limited preparation time meant that four wheels trumped two. That leaves the Red Bull KTM Factory Team as the star attraction in the bike race as they look to make it 17 wins on the spin. Defending champion Sam Sunderland knows that carrying the #1 plate puts a target on his back for others to aim at but he’s ready for the challenge.

“It’s a long, long way and I’m sure plenty of things are going to happen.” – Sam Sunderland

Britain’s Sunderland is not the only member of his team who knows what it feels like to win the Dakar. Australia’s Toby Price is back on his bike after an injury-plagued year and eager to get up to speed.

“My expectations are always high, you want to be on that top step or at least inside the Top 3.” – Toby Price

Austria’s Matthias Walker and France’s Antoine Méo are also ready to pull their weight for the team to help maintain their fantastic winning tradition. Plus, there’s a new recruit this year as Spain’s Laia Sanz joins the squad on their quest for glory. Sanz is targeting a repeat performance of the Top 10 finish she scored three years ago.

“The only way you can try guard yourself against getting problems with the heat or altitude is by arriving here as physically fit as possible.” – Laia Sanz

Nasser Al-Attiyah: “I literally love this race and it’s a real pleasure to be at the start year-after-year. I’ll need to be smart and not focus on this or that or stage wins, but to finish as the winner. The first week promises to be crucial and the crew who comes out with a good lead will already have taken a big step towards the win. But we are confident. We have won many rallies with the previous Hilux and this version is a little better for everything!”

Giniel De Villiers: “I cannot wait to start because this new Hilux is a big step forward. We must obviously stay calm in the face of adversity, because we know it is going to be difficult, but I am rather optimistic. Much has changed under the body, but the main change has been the repositioning of the engine and the resultant improvement in weight distribution. I have a very good feeling at the wheel. I am also happy that the route has returned to more offroad, because I think this suits us better.”

André Villas-Boas: “I only had one month to prepare for the Dakar after I left Shanghai SIPG. I started a physical program that my physio and fitness coaches that worked for me in my football teams designed. I’ve been trying to stick to that program and I also rented an altitude tent. The thing is, we never know how our body will react to being in the car everyday and suffering at different points. We going nearly as high as 5,000 metres so that will be tough. I don’t think anything can prepare you fully for the challenges of the Dakar so in a sense I’m just waiting to see what will happen. I’m an ambassador for three charities and I thought it was important to bring their name here to the Dakar. This event is famous around the world and lots of people are tuning in to see what’s happening so it’s a great chance for me to raise awareness for these good causes. We have Laureus which are famous for the Laureus World Sports Awards but they also run 150 projects around the world to protect kids from violence and social exclusion through sport. We’re also carrying the name of Ace Africa which runs projects for underdeveloped communities in Africa and APPACDM Porto which helps kids in my hometown.”

Sam Sunderland: “It’s going to be a tough one, but it’s going to be tough for everybody. It’s hard to pinpoint what the toughest bit is going to be this year. Obviously the dunes are always a long day but then when you get to day 13 and 14 everything is tough. At that stage you’ve got so many days accumulated and it all adds up. It’ll be a disadvantage for me to start out first on day one but we’ve got 14 days to deal with that. It’s a long, long way and I’m sure plenty of things are going to happen.”

Toby Price: “My expectations are always high, you want to be on that top step or at least inside the Top 3. The trouble is I’m coming into the race after a rough year and I’ve only recently got back on the bike. I think we’re just going to have to stay relaxed and hopefully something good will be there waiting for us at the end. The plan is to stay on two wheels so we can be in the running at the end of it.”

Antoine Méo: “I’m not going into the race with any big expectations. In the first week I’ll try my best to stay around the Top 5. If I can do that then after the Rest Day I’ll see what can be done in the second week of the race. This is how we did it in my first Dakar and it worked out well until I had my accident. This year the preparation was really difficult because I had a knee injury. Normally I would have done a lot more skiing and swimming to get in shape.”

Laia Sanz: “The early starts everyday become very tiring and also the heat. Some stages in the past have been like hell because of the heat and you suffer a lot. The altitude can make you feel strange, but the heat for me is the worse. The only way you can try guard yourself against getting problems is by arriving here as physically fit as possible. I spend a lot of hours in the gym and apart from that I also spend a lot of time skiing in the mountains. Time in the mountains is always a good workout, I also go up there cycling and hiking. This all helps me get in shape for the challenges of the Dakar.”