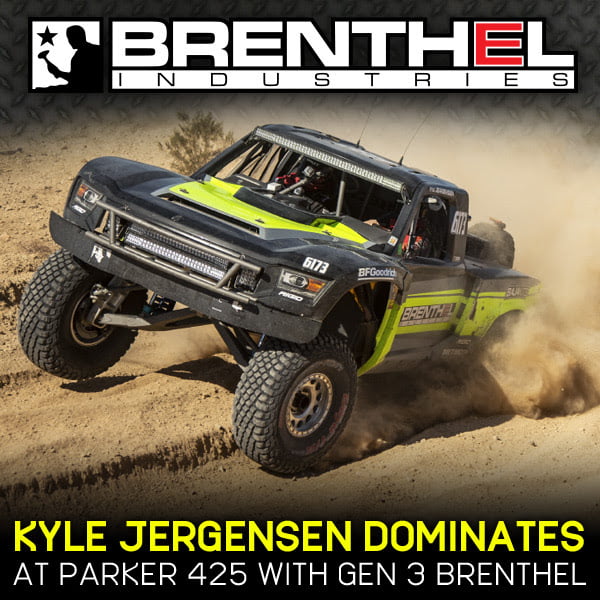 Kyle Jergensen put in an impressive performance at the Best in the Desert series season opener in Parker, Arizona. Driving a Gen 3 6100 class truck for Brenthel Industries, he took the number one qualifying position, and then won the race. Out of 84 unlimited Trick Trucks, unlimited class one cars, and fellow 6100 class competitors, Jergensen was 3rd overall. To the casual observer, he made it look easy, but there was plenty of hard work behind the scenes. 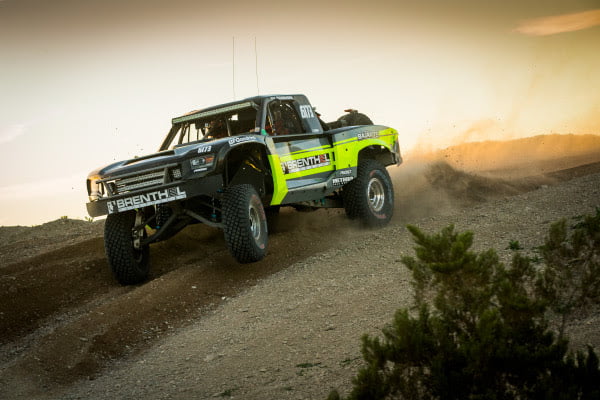 New to team Brenthel, Jergensen had a single test session with the team to dial in the Gen 3 truck to his liking. Jergensen made wholesale changes to the ride height, shock valving, torque converter. Kyle has a lot of experience setting up his own truck. He has won 4 straight 6100 races going back to the Silver State 300 in 2019. What he likes might not be what everyone else does, but it’s been successful for him. He asked the crew to trust him, and they did. It’s a testament to the Gen 3 chassis design that such a wide range of adjustments are possible. It also speaks highly of the ability for it to fit anyone’s driving style, get them comfortable in a hurry, and right up to speed.

Qualifying for the race went smoothly; even as several other competitors suffered wild crashes or broken parts. It was so smooth in fact that Kyle felt slow. “Maybe it was the deep sand but I felt slow during qualifying,” says Kyle. “I was surprised to find out we were number one.” Again, the way the Gen 3 makes a driver feel so comfortable; less effort is required to run at the limit. 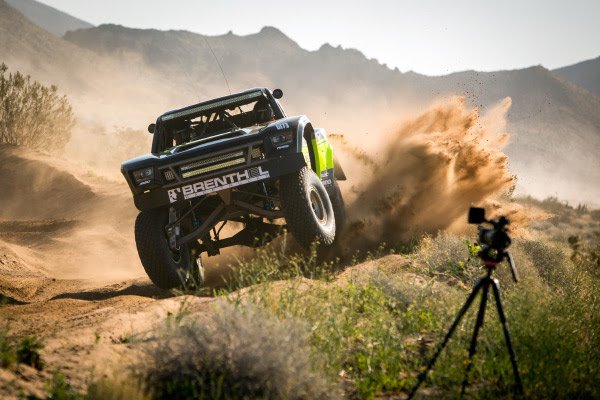 On race day the good luck continued on lap one. Kyle methodically caught, and passed all the unlimited cars ahead of him that were holding him back. He was running a smart pace, and building a lead on his closest rival. Even though Kyle had the hard job of clearing the road ahead, he was still able to eke out a time advantage over Shawn Croll in second place. He got a lightning fast stop at the main pits; 80 gallons of fuel, and 2 fresh tires in just over 30 seconds. “I didn’t even have time to eat a few grapes,” Kyle lamented.

On lap 2 things got interesting. A rock kicked up and severed a rear brake line. Codriver Shawn Shanks remembers putting a bag with spare brake parts in the truck, but it was no longer there. After “yelling at each other for 4 minutes,” as Kyle tells it, he remembered there was a built in shut off valve in the truck. They shut down the rear brakes, and continued. Since they are typically heavily biased to the rear, the front brakes alone are not able to match the stopping power when the rears are working. They had been passed by the Baldi truck while they sat, but were now bearing down on them. “We were down 2 minutes to Croll which meant he was ahead by 2:30 because he started behind us,” said Kyle. “I knew if we didn’t get back around him by the time we hit main pit, we might not ever catch him. From pit 1 to midway I drove the hardest I’ve ever gone. We pushed so hard that we took back the 2 minutes; we were only 10 seconds down. As we were closing in on the main pit we had a 1 minute gap on him. I was talking to the crew and told them I would put as much time on him as I could but they had only 40 seconds to fix the brakes. Whatever they could do in 30-45 seconds, but don’t let him beat us out of the pits. They told me they could replace the line, top it off, but they wouldn’t have time to bleed them. (They also dumped another 80 gallons, and two more tires). The crew was flawless! They did all that in less than a minute to preserve our lead, and my brakes were back to 100 percent.” 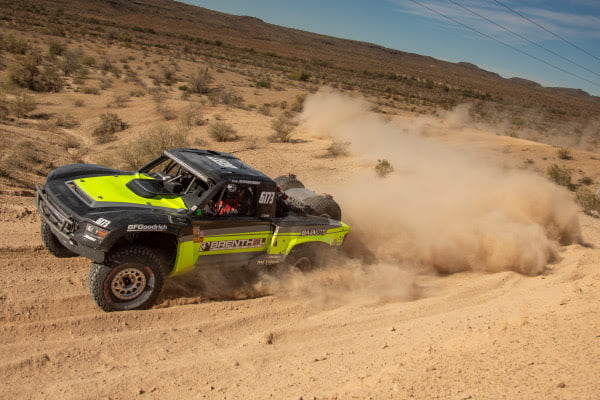 Kyle continued to push hard in the truck not knowing if Croll would mount a last charge for the finish line. All he could do was run as fast as he could, and hope it was fast enough. He was actually running a faster pace than he did during qualifying. His second lap was his fastest despite stopping for several minutes, and having diminished brakes. “My codriver Shawn did a great job calling the course out so I could get the truck slowed down in the turns, Kyle continued. “We had a moment while running very hard in a wash. I just couldn’t get it slowed enough for a turn. We got up on two wheels and I hit a pretty big log lying on the side of the course. It moved the steering wheel off center, but nothing broke. We were able to keep pushing the truck as hard as I wanted to. We are so happy to start off at the top with a win. Now we need to keep it going.” 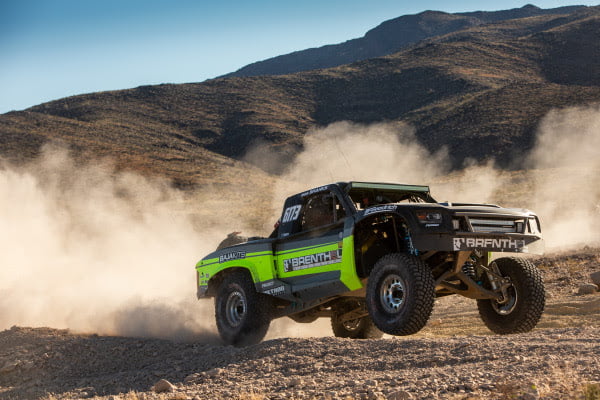 Kyle stole the limelight at the Parker 425 with his incredible performance, but Brenthel had 8 trucks in total at the race. They all got the same level of preparation, and lightning fast pit stops. Brenthel has many options available if you want to purchase a vehicle, or participate in their Arrive and Drive program. Kyle says it’s going to be a great year for him because he can concentrate on his Concrete business, and leave all the prep and logistics to Brenthel. It’s a perfect way for him to race at the highest level, and still maintain his business. If you always wanted to race, but didn’t think you could make it work, give Brenthel a call so they can design a program for you. Go to: www.brenthel.com to see what cars are available. They have several truck designs, open wheel cars, prerunners, and of course the exciting Gen 3 chassis that is putting drivers on the top of the podium with regularity.