It all came down to this, the battle royale pitting Pro 2 and Pro 4 to see who would come out on top and raise a check for $30,000. The Lucas Oil Offroad Racing Series ended their season yesterday in Chandler Arizona with he Lucas Oil Challenge Cup where no more points are on the line, just bragging rights and cold hard cash. 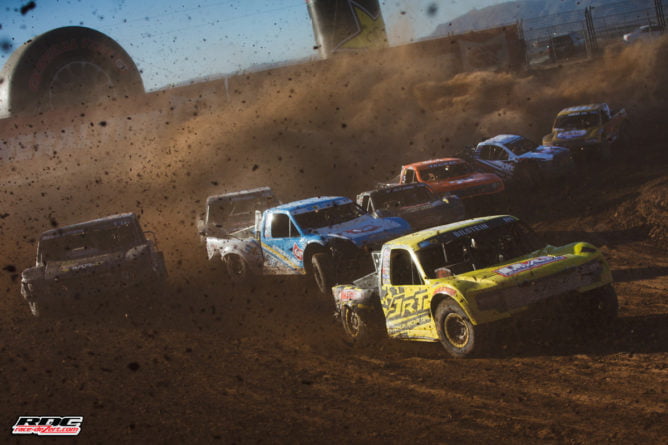 Before the races started however Carl Renezeder was honored during opening ceremonies as this was his last short course race before his retirement from the sport. He walks away still in his prime and he will be missed on the track as he always kept it exciting for the fans and his passion for the sport showed through his driving and also how he held himself outside of the track. 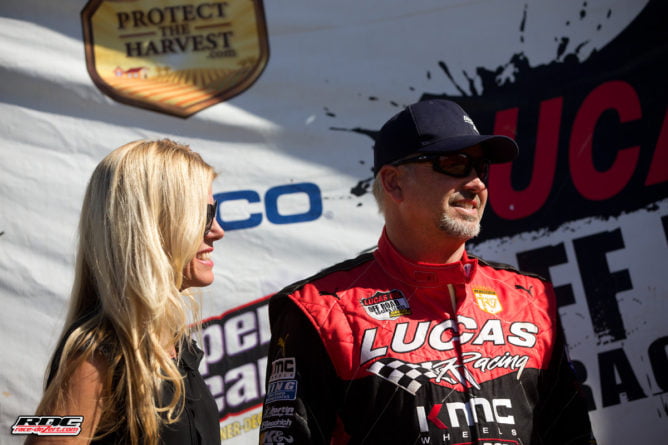 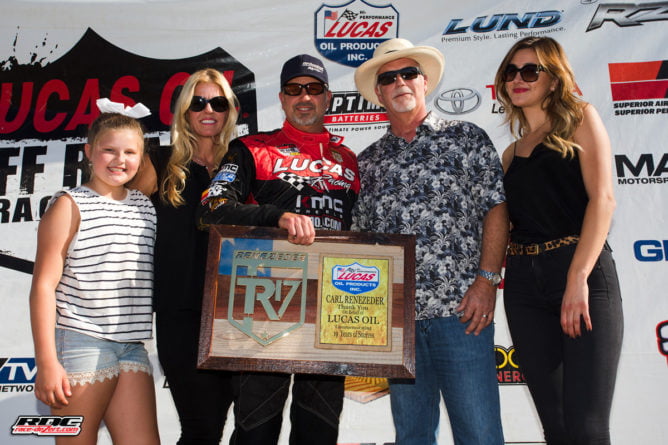 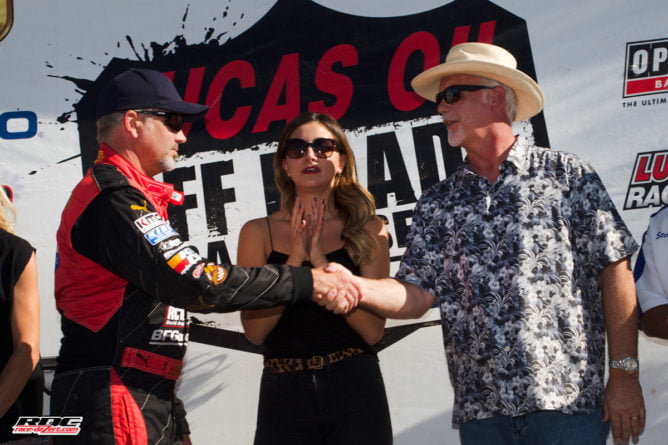 The race everyone comes to see is the Pro 2 vs. Pro 4 battle where the Pro 2’s are given a head start to see if they can fend off the 4wd monsters. For this year LOORRS decided to do a standing start where the trucks are all parked until they go green rather then the traditional rolling start. This was so that gap was consistent and there couldn’t be anyone break checking or jumping the start. The Pro 2’s were lined up on the front stretch and the Pro 4’s almost a full lap behind in between turns one and two. The most exciting part of this race is when the Pro 4’s get within striking distance of the Pro 2’s and see them start picking them off. 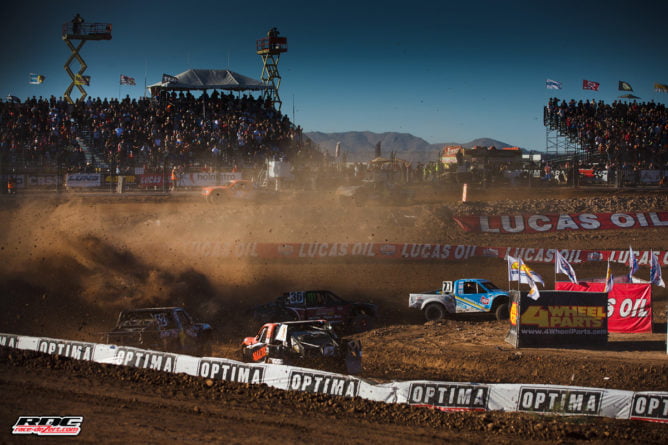 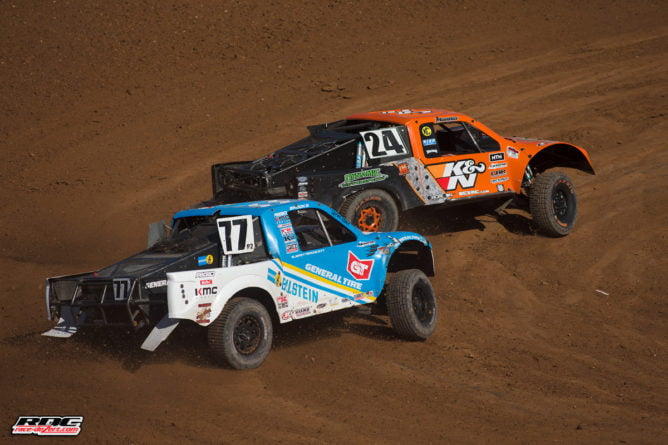 Rob MacCachren who runs both classes decided to race his Pro 2 in this race after qualifying was done and saw that he would start first off the line. Its always a gamble because you never know how the race will go or what kind of conditions the track will be in. A dry track and no cautions are what the Pro 2’s need to be able to hold off the lead Pro 4’s but the stars weren’t aligned for Rob Mac this time around. 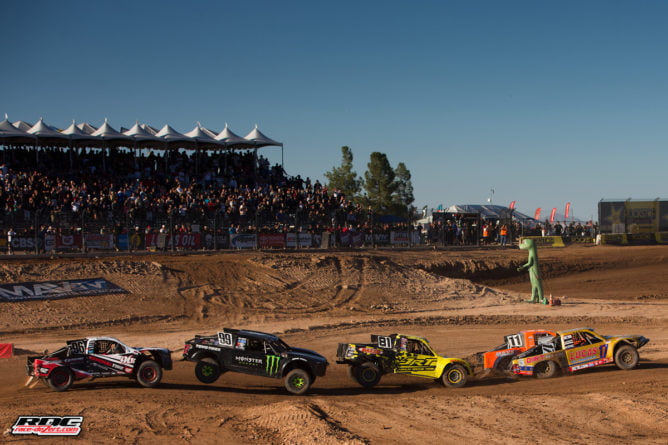 Dust is always an issue at this track so its important to get water down before the start other wise the track becomes a dust bowl right away. This however favors the Pro 4’s with their 4wd. The rules for the cup race also state that if there are any yellow flags in the first four laps the two groups would be re-gapped like the start of the race, and as luck would have it the first yellow flag was thrown on lap number five after Ampudia caught on fire, which meant the time gap was now erased. 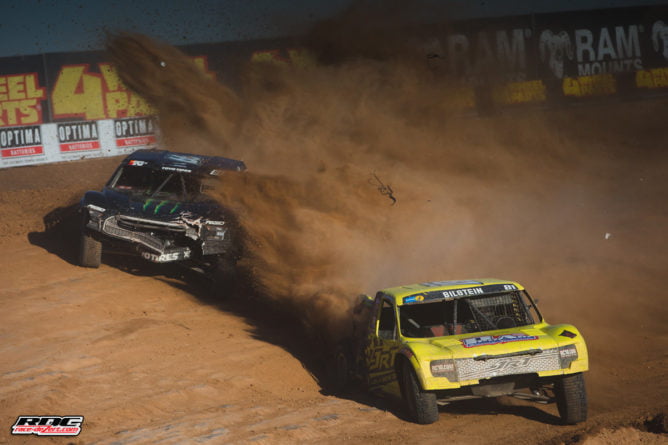 Now with the Pro 4’s on the heels of the Pro 2’s it was only a matter of time before they started to get by one by one. Trucks slowly starting dropping out as McGrath, Patrick Clark, Ronnie Anderson (racing RJ’s Pro 2) and others were forced to pull off with mechanical issues, and unfortunately on lap 8 Carl Renezeder was forced to pull out of the race on his final short course race of his career. 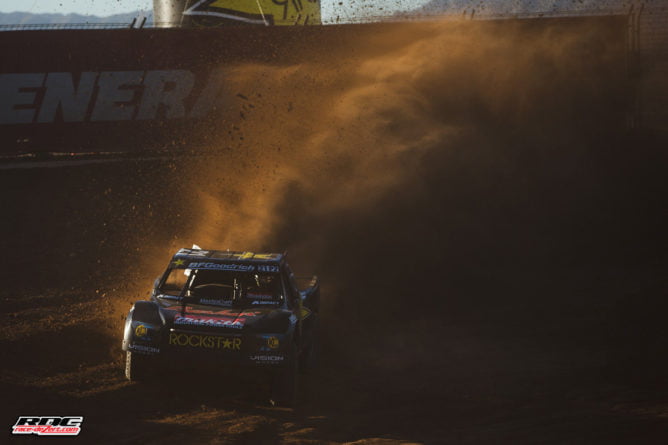 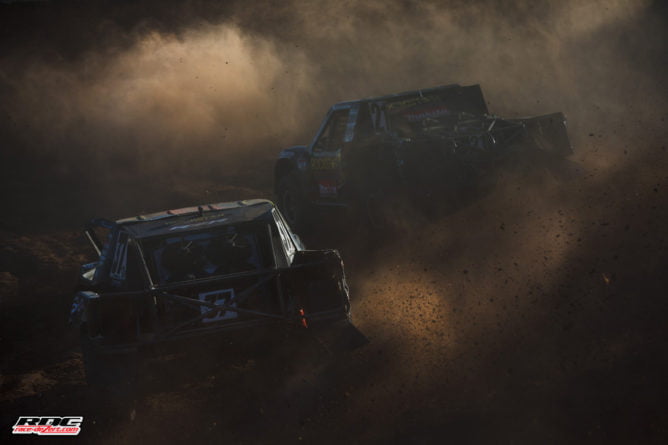 Rob Mac did all he could to hold off Doug Mittag, Kyle Leduc and RJ Anderson but there were just too many laps left and they were all able to get by. Mittag was putting on a great show holding off the 5x Pro 4 champ and making Leduc push his truck to try and make a move. It looked like Mittag had what it took to take home the cup win but a flat with a few laps to go would give Leduc the opening he needed to take over the lead and from there it was all Kyle. RJ held strong and had a great race but it would end up being Leduc’s weekend taking home his fourth Challenge Cup win and becoming $30,000 richer. Mittag would hold on to a third place finishing on the flat while throwing rubber pieces into the sky the last few laps. 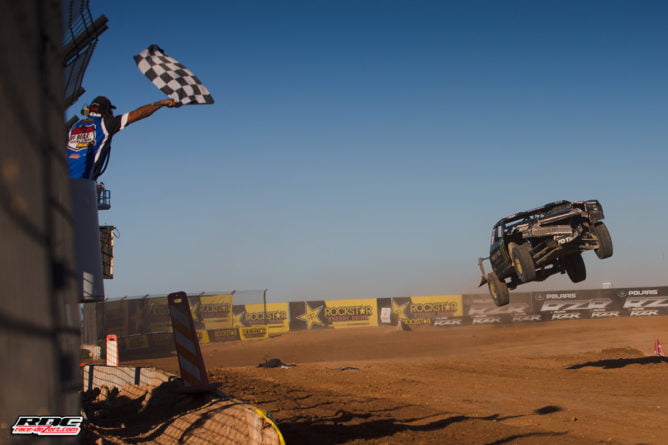 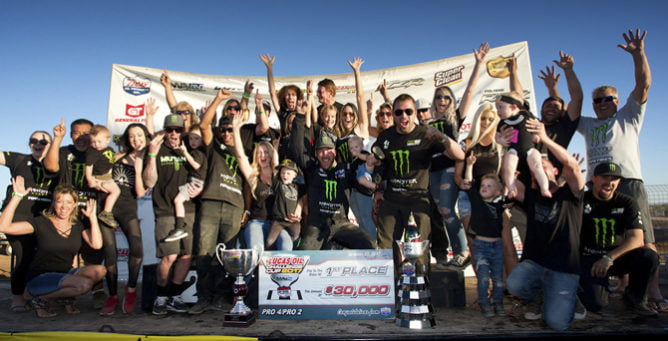 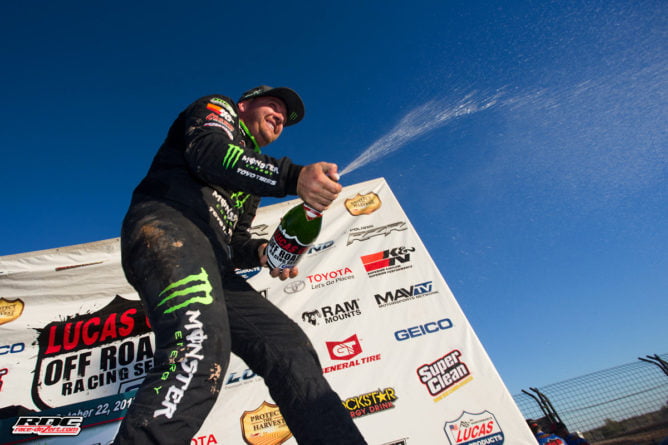 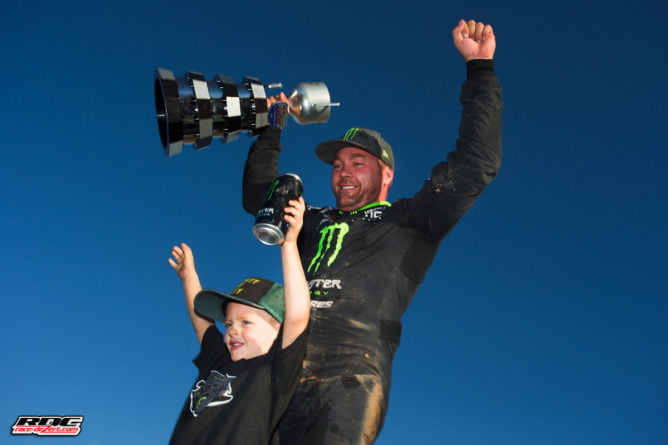 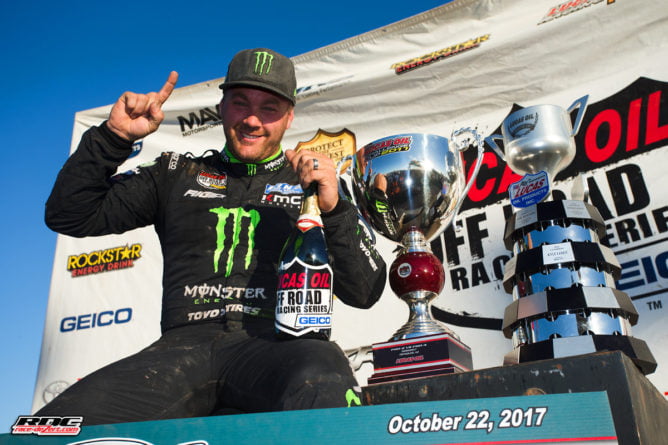 In both the Pro Buggy cup race and Prolite they were traditional races with the class running by themselves. In years past the two classes were combined as the lap times are always pretty close but open wheel buggies and fendered trucks don’t always make for a cozy connection when contact is made. 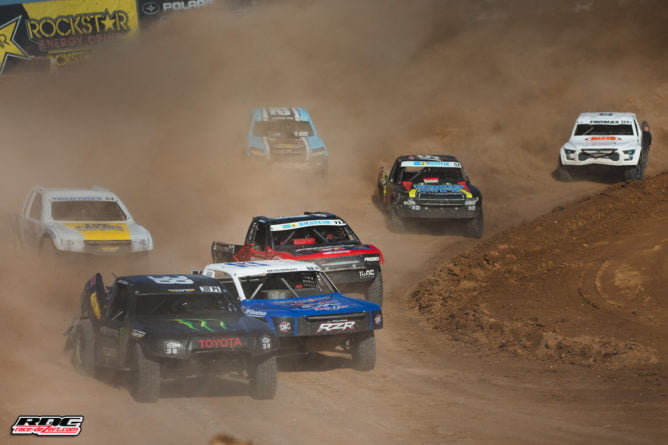 In the Prolite race Brandon Arthur made easy work of the division finishing out the 2017 season strong. Arthur started on the front row and after grabbing the hole shot never looked back. Brock Heger, Ronnie Anderson, Jerett Brooks and Ryan Beat all swapped positions behind him trying to make up ground but their battles let Arthur put some time on the rest of the group. Hailie Deegan was also right up there in the podium mix but a flat tire would force her to limp around the track. The cup win lets Arthur take home $10,000 and makes it two years in a row as the Prolite Challenge Cup Winner. 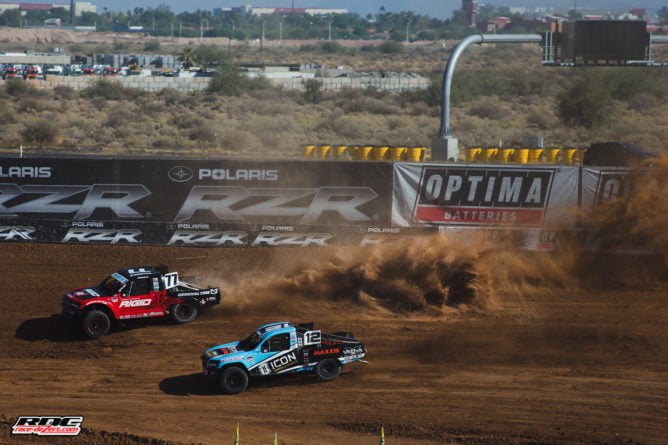 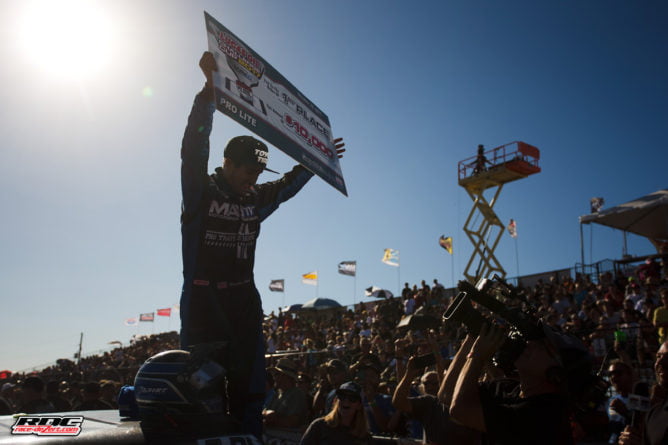 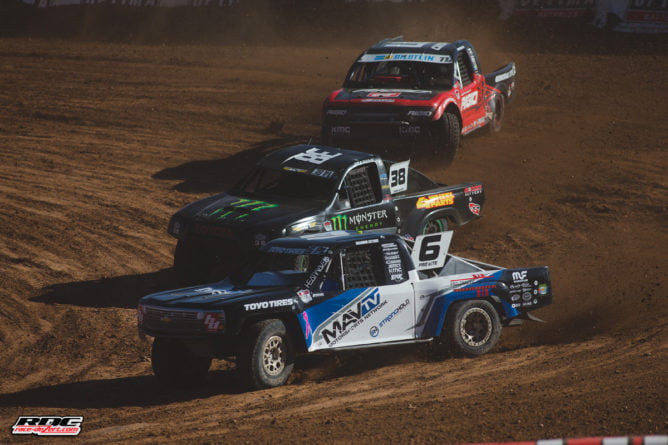 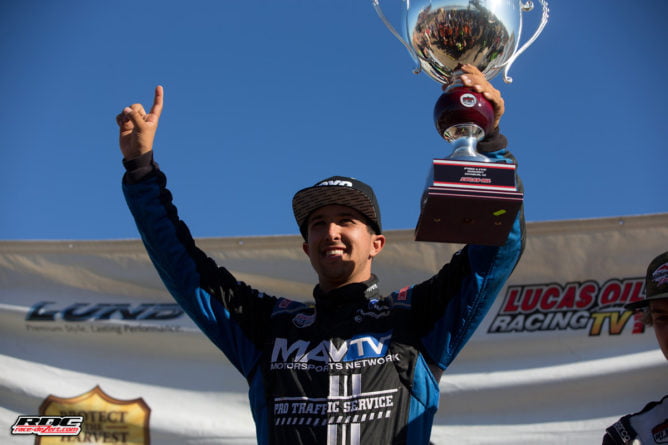 In the Pro Buggy cup race Darren Hardesty Jr. was coming fresh off a win the day before after clinching the points championship for the second year in the row. Like Kyle Leduc it would be a great way to finish off the season by also winning the Cup race and taking home some cash but a certain Arizonian had different plans instead. Hardesty lead the majority of the race and looked to be doing business as usual but Kevin McCullough had something else in mind. Lap after lap McCullough closed in on Hardesty Jr. and with about six laps to go was able to get around Hot Sauce. From then on it was all McCullough and he would go on to take home the win. 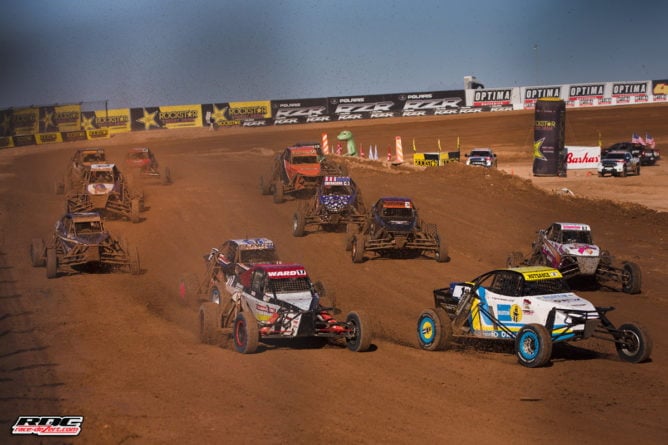 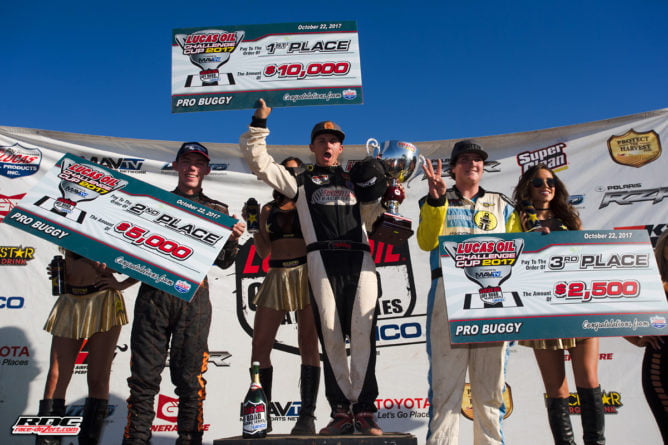