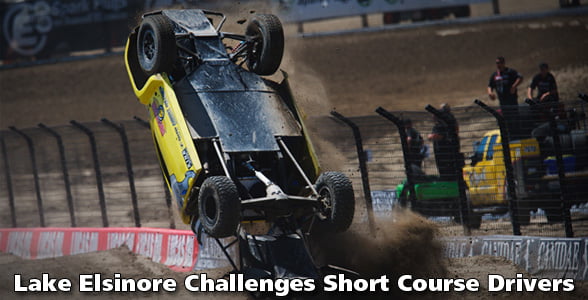 Today marked the return of short course offroad racing to Lake Elsinore, CA with Lucas Oil Offroad Racing hosting Rounds 3 & 4 at the newly renovated Lake Elsinore
Motorsports Complex. What was once a dusty dirt lot is now filled with semi trucks, grandstands and huge table tops that put vehicles high into the air.

Qualifying was held this hot Friday afternoon to determine starting positions for Round 3 on Saturday. The action got underway right from the beginning as Adam Wik went for a wild ride in his Prolite during practice through the rhythm section, which in turn caused LOORRS officials to chop them down as they felt they were unsafe for the smaller classes. The Prolite class seemed to be the biggest magnet for crashes as during the qualifying session both Bradley Morris and Jimmy Stephenson both rolled after hitting the large table top a little to hard and bouncing on the landing, causing their truck to spin and go over. Deegan later added to the crash list as going into turn 3 he caught a rut and put it on its side.

Once again the young guns showed that they are a force to be reckoned with in the Prolite class with RJ Anderson and Austin Kimbrell being the only two drivers to post sub 53 second lap times. Justin “I’m currently icing my neck” Smith rounded out the top 3. In Pro 4 everyone expected Kyle Leduc to continue his domination but mechanical problems left him at a 4th best time letting Carl Renezeder take the fasted time of the day. Interestingly Brian Deegan, who qualified first in Pro 2 was only about a second behind the fasted Pro 4’s. In both classes only one second separates the top 7 qualifiers in each respective class, which means tomorrow is anyones game for the taking.

The track at Lake Elsinore is a fast course with many lines and options for the drivers, tomorrow should prove to be an exciting day with lots of great racing.

Full practice and qualifying times can be found here.