The 4 Wheel Parts Desert Showdown kicked off the 2022 Season for the Legacy Racing Series. With $100,000 on the line for Pro Turbo UTV and Class 6100, Legacy Racing knew that Livestreaming was an essential part of the season. The 2022 4WP Desert Showdown Livestream was possible thanks to our Partner, Herling Racing. All of Qualifying and Race day were covered and are available to watch at LegacyRacing.net. Thank you Herling Racing for giving our sponsors, family, friends and fans from all around the world the opportunity to watch the 4WP Desert Showdown event from the comfort of their homes. Turn 2 Productions produces all our livestream coverage. Their commitment to off road desert racing and professionalism is leading the industry to new standards. They continue to reach new heights and endless possibilities. With new and exciting ideas around every corner you can expect nothing but the best. 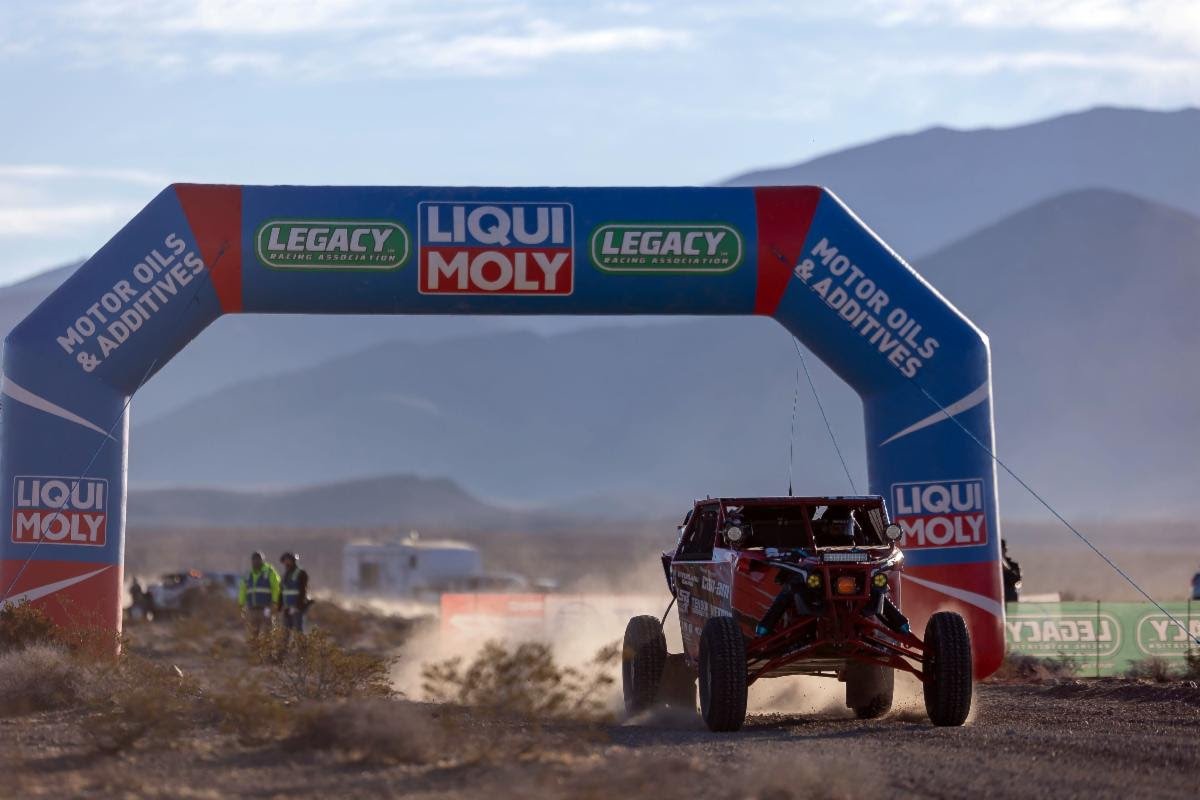 The action started with Qualifying bright and early Friday morning. The first class to take the qualifying course was the Turbo UTV’s. Lonestar Racing sponsored the qualifying for the Turbo class with $1,000 cash and a one of a kind trophy. The fastest Turbo of the day was T924 Garrick Lastra with a time of 4:28.101, earning the position of the first UTV off the start line. 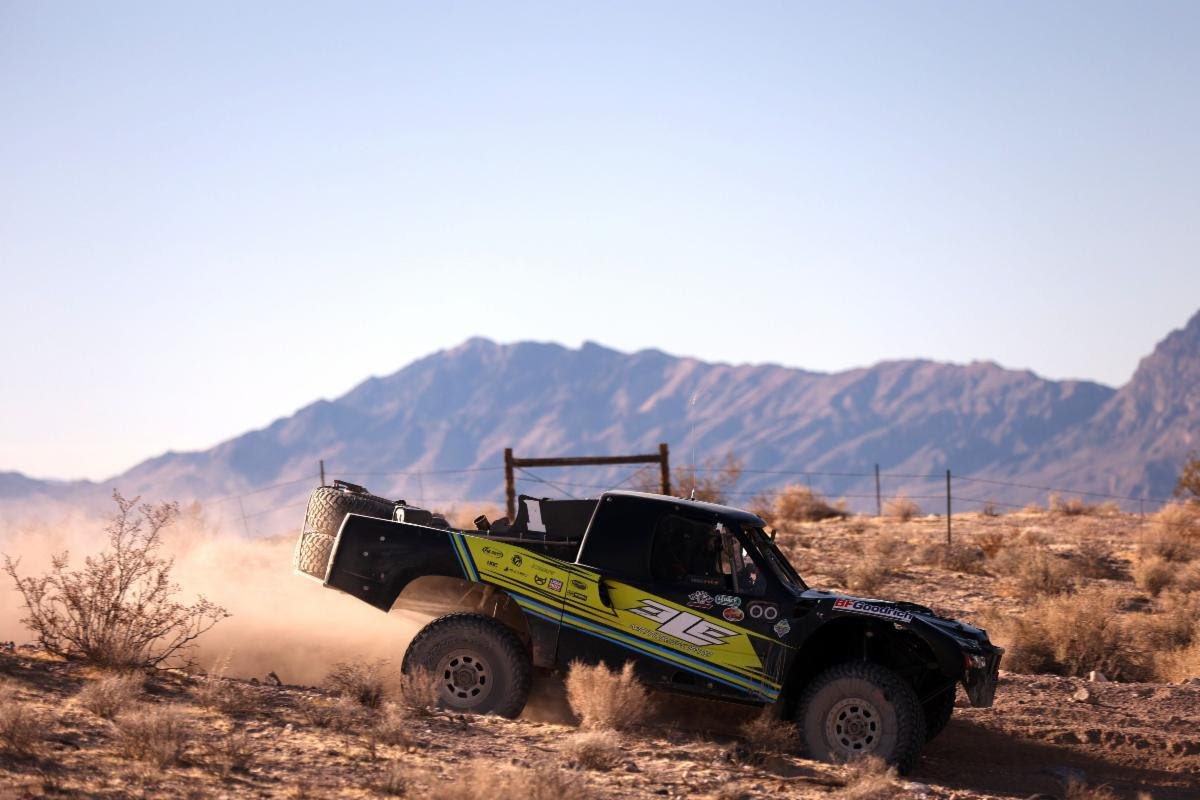 Next up, Class 1 and Unlimited Trucks, all fighting for the Stronghold Engineering fastest qualifier award and open air on Race day. First to qualify was 1546 Jake Johnson he set a time of 3:55.045. He set a good pace for the pack to have to beat and that time would solidify his 2nd position off the start line Saturday. Next was the #1 truck of Eric Hustead. Just like Legacy’s 2021 season, where Eric swept all qualifying events, Eric once again laid down the fastest qualifying time and secured first vehicle off the line on Race day. 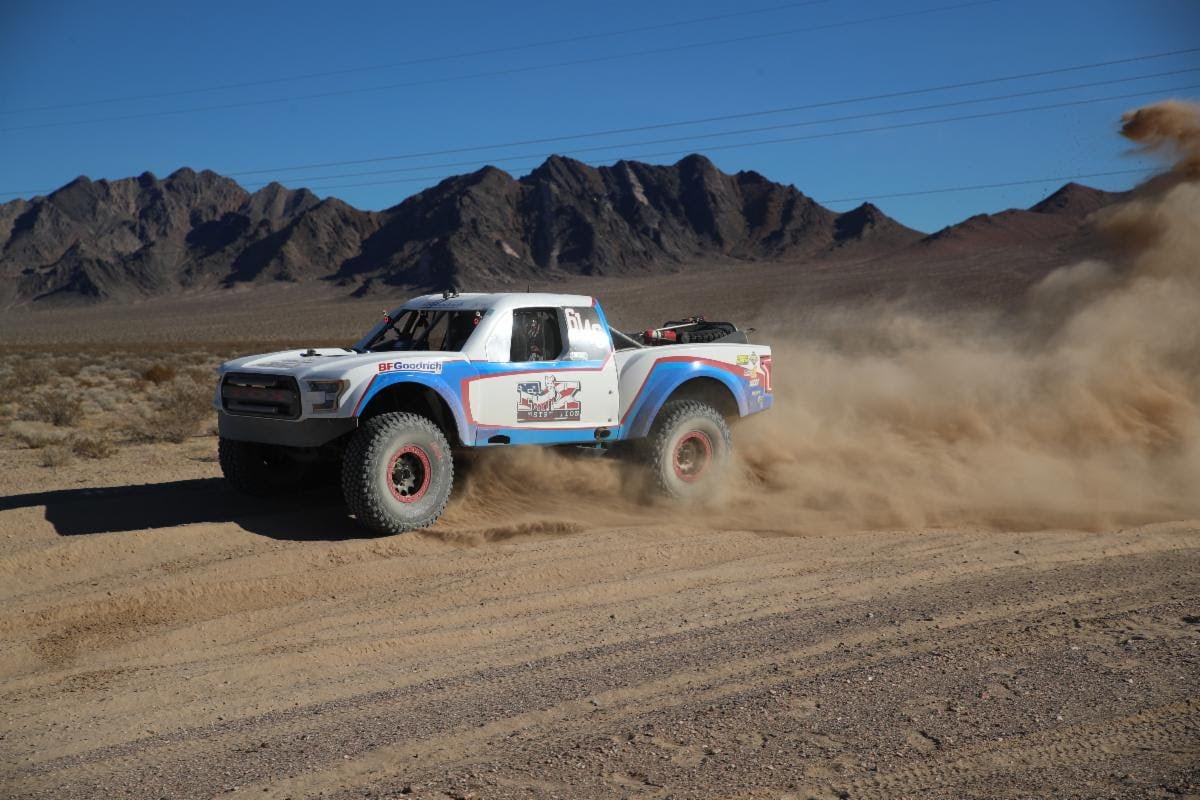 One of the most competitive classes, 6100 Spec Truck, was the final class to qualify. There were 23 trucks competing for the Diamondback Materials fastest qualifier which included $1,000 cash and first in class off the line. Bets were placed on who would win, would it be Legacy’s defending champion 6101 Travis Chase, two time 2021 qualifying winner 6158 Chasen Gaunt, maybe the fast kid Conner McMullen, or any of the other 20 competitors. In the end, 6146 Brent Fox would post the fastest time, followed by 6139 Adam Householder and rounding out third was 6188 Miles Miller. The stage was set to do battle for a chance at the $100,000 payday. 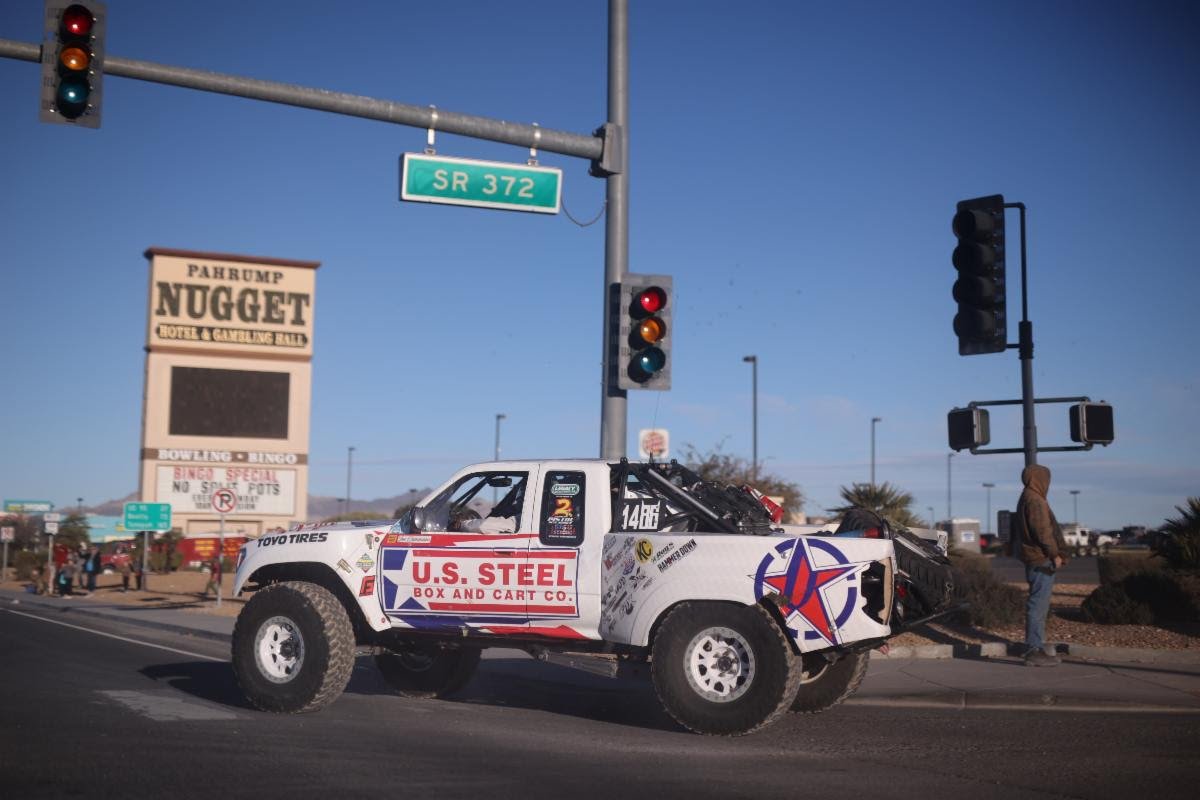 Saturday Morning, Race Day, saw race cars lining up at the Pahrump Nugget to take off for the 235 mile fast paced and technical race course. Unique to the 4WP Desert Showdown is the police escort on Highway 160 from the Host hotel, The Pahrump Nugget, to the Start Line in Johnnie, NV. The route would take race cars thru downtown Pahrump, where local fans came out by the hundreds showing support by waving their American Flags and displaying their homemade signs. It was amazing to see the Pahrump locals showing support for the off-road community, their favorite drivers and displaying the flag of this great nation, the United States of America!!! 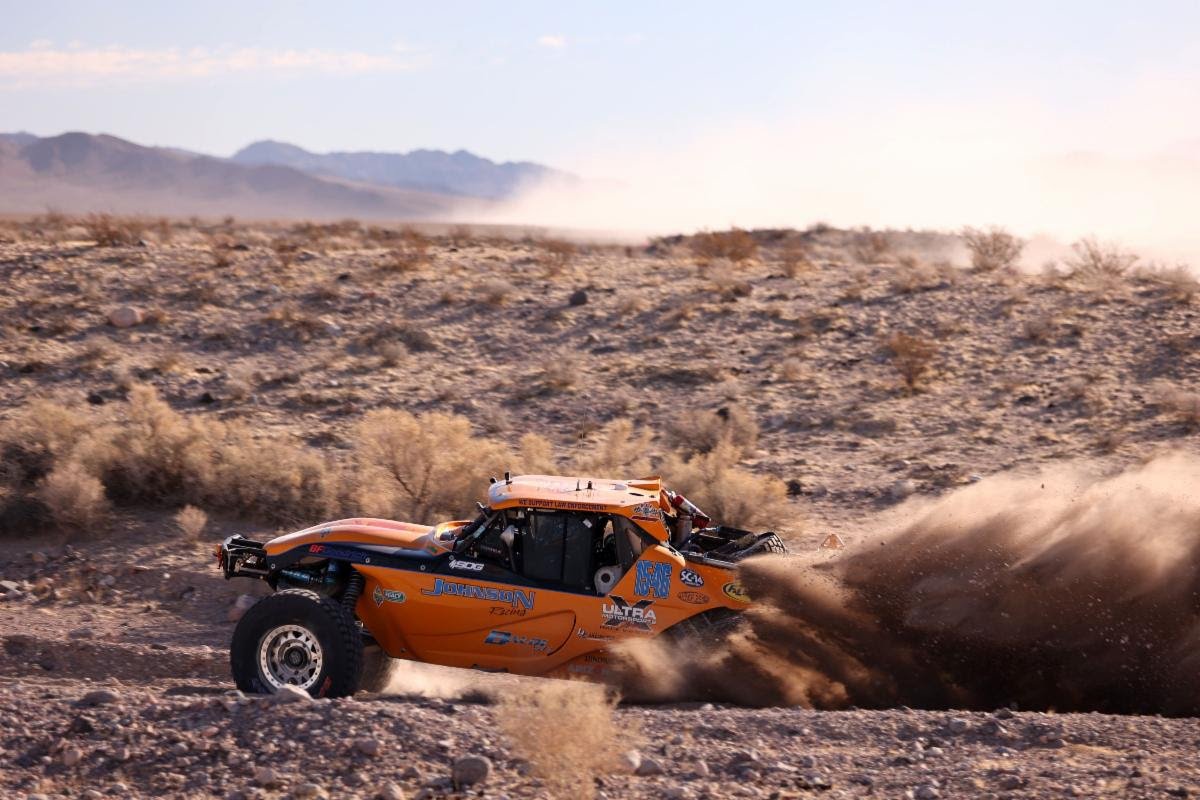 At 9 am, #1 Eric Hustead put the pedal to the metal as his BFGoodrich Tires took hold of the Nevada Desert, opening the road for the competitors behind him. He would lead for the first 40 miles until the infamous rocks would take their first victim causing him to pull over with a rear flat tire. Several vehicles would be able to get by him including the 1546 Jake Johnson. Jake would hold the lead until the end but would not come into the finish line unscathed. Just a mere 15 miles from the finish line 1546 would have to pull over for a rear flat. Co-Driver Robert Llewellyn would get the tire changed in record time and they would get back on the road just before the 1 truck could sneak by. Jake was the 1st to cross the finish line and would take home the victory in Class 1. Eric physically finished 2nd and snagged the 1st place in Unlimited Truck. 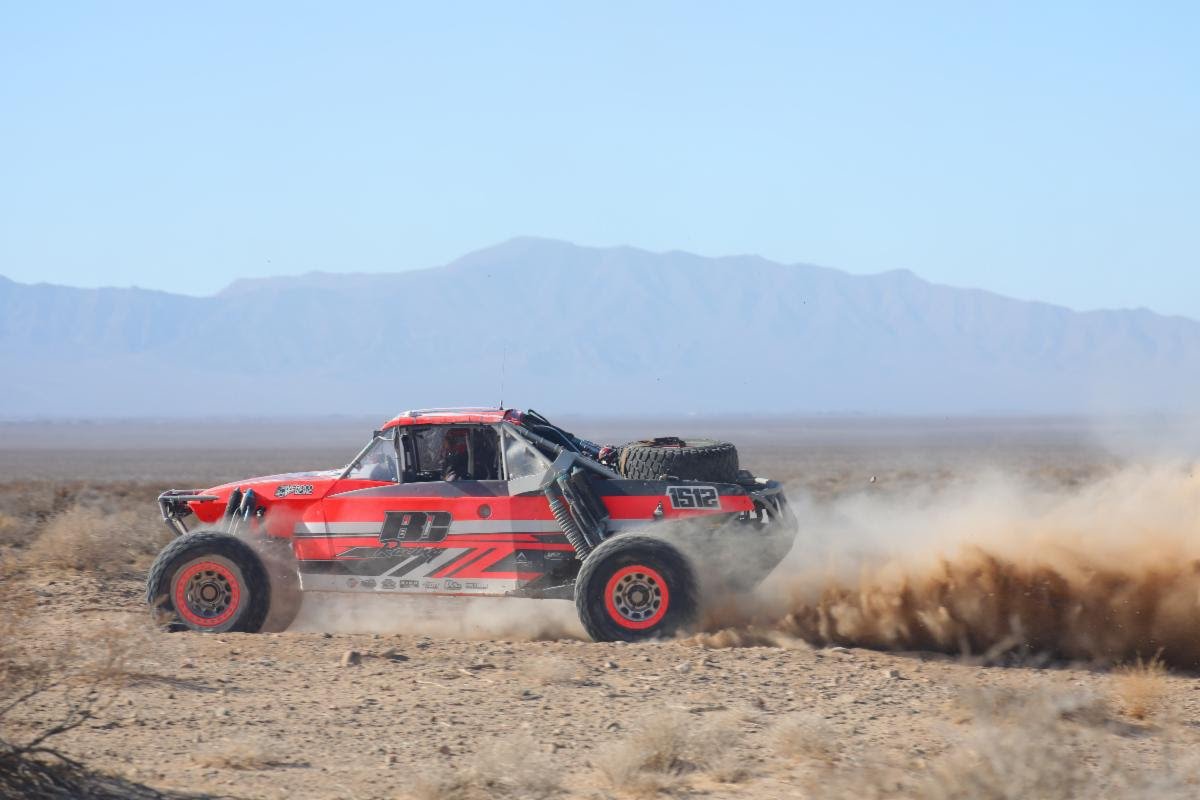 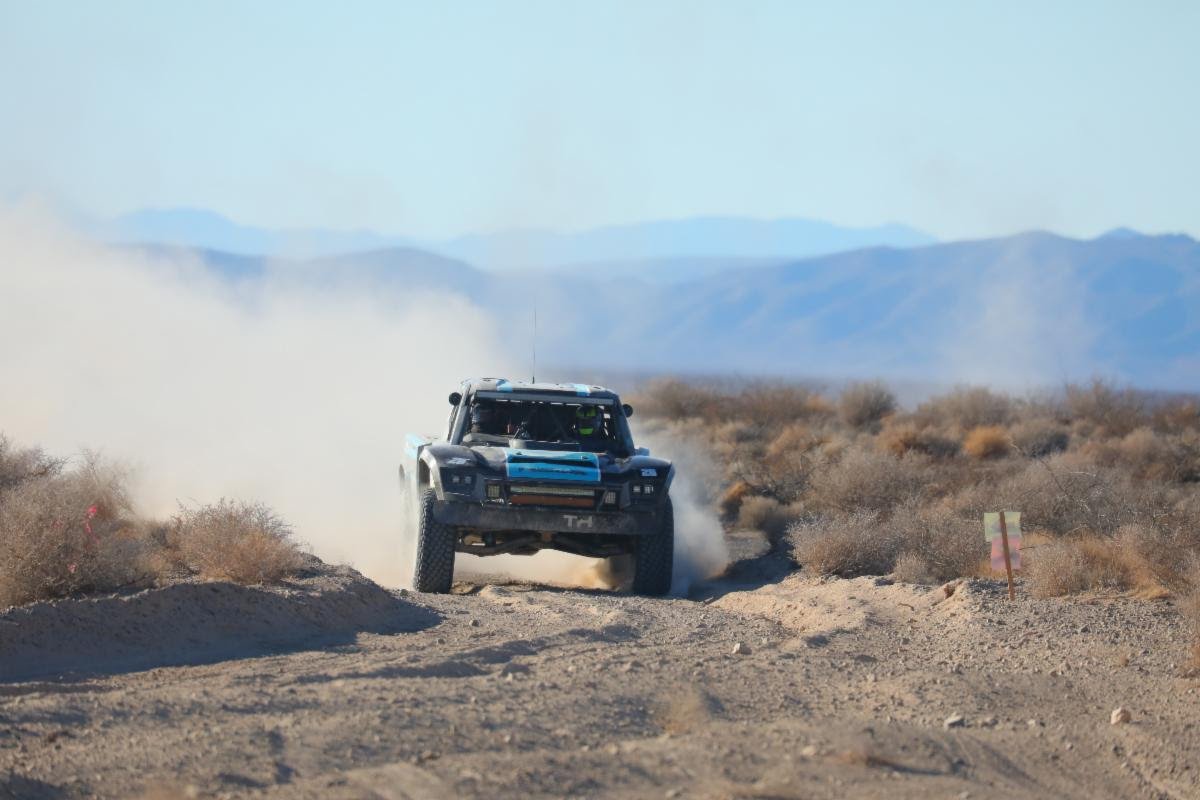 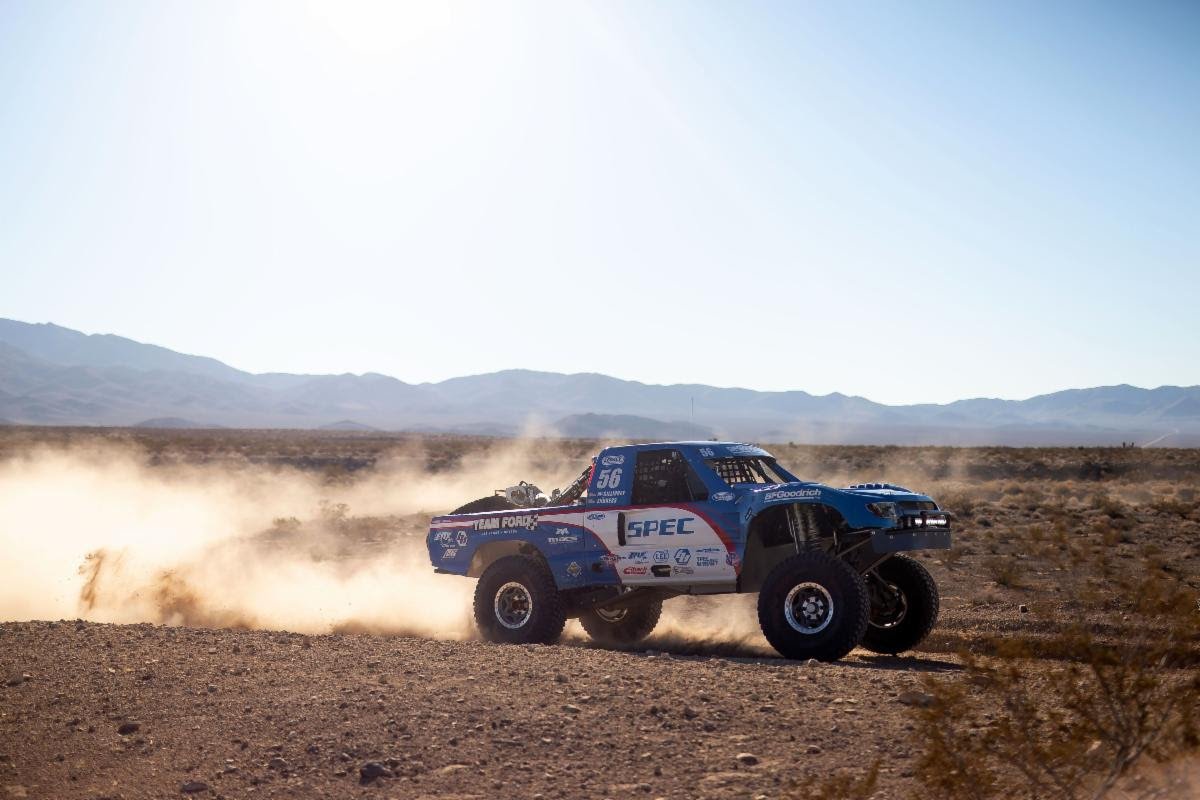 1512 Blaine Conrad with his revamped single seat Class 1, previously owned by Sam Berri, suffered some major damage at qualifying. The BC racing team was able to work all night to get him back running before they headed to the start line Saturday morning. He was able to take home an impressive 2nd place in Class 1.

56 Kevin McGillivray was holding down 2nd position in class until a mechanical failure would end his day at race mile 150. The 26 of the Brenthel Industries brothers, Jonathan and Jordan, were debuting their new All Wheel Drive Unlimited chassis. The 26 would take over the second place position in Unlimited Truck and hold that position all the way to the checkered flag. 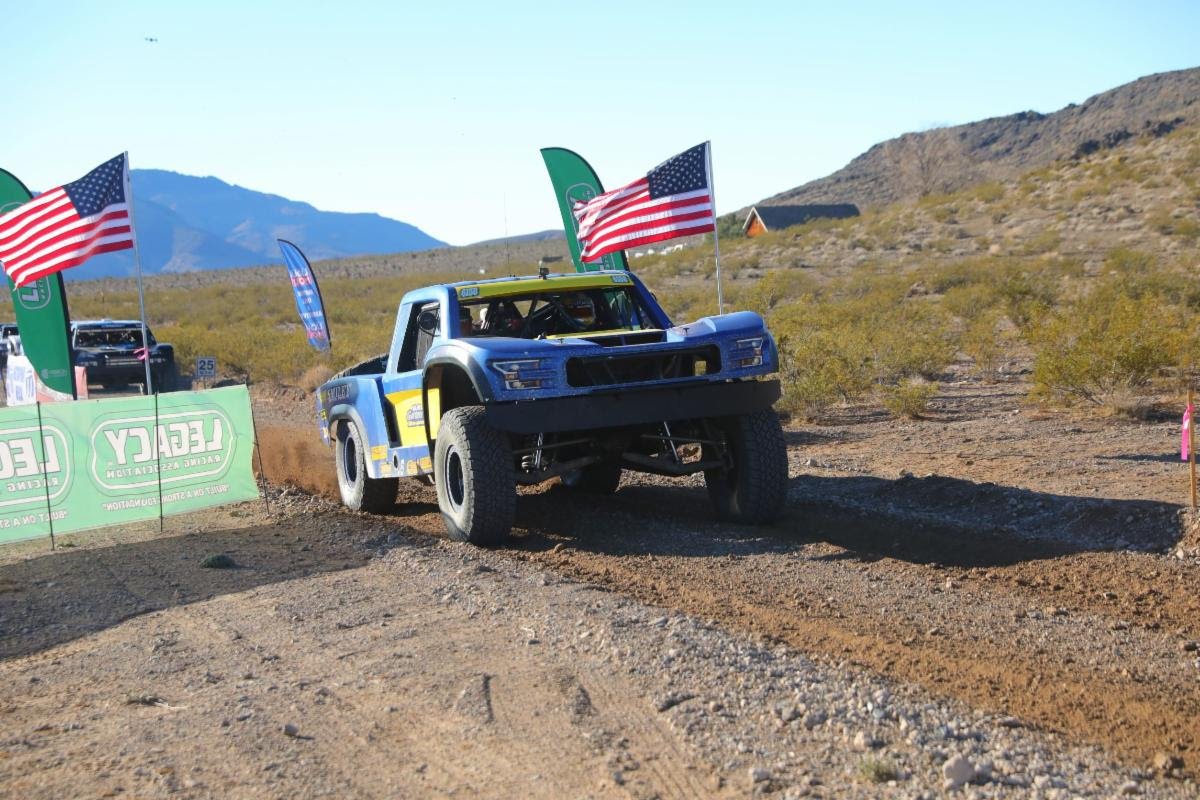 The excitement began early in the 6100 class when fastest qualifier 6146 Brent Fox called Saturday morning requesting a rear start. It was at first believed he had a mechanical issue but was later determined to be water in the fuel. After the team figured out the issue, 6146 was the very last vehicle to leave the start line.

6139 Householder was happy to take the first off the line in class from Brent. He was able to hold the lead until 6158 Chasen Gaunt passed him while they were in Pit 5. Gaunt had a slight advantage of not having to stop for fuel or tires with the help of their Geiser truck. The larger fuel capacity definitely paid off as they secured not only the class win but overall fastest time of the day 3:31:02. Chasen pushed the truck hard to secure his chance at the Diamondback Materials $100,000 prize. Adam Householder was right on his tail, literally, finishing only 39 seconds behind Gaunt. This earned him 2nd in class and also the 2nd fastest overall time of 3:31:41. 6144 Todd Jergensen quietly snuck up from the middle of the field and with a flawless day took home the 3rd place 6100 position. 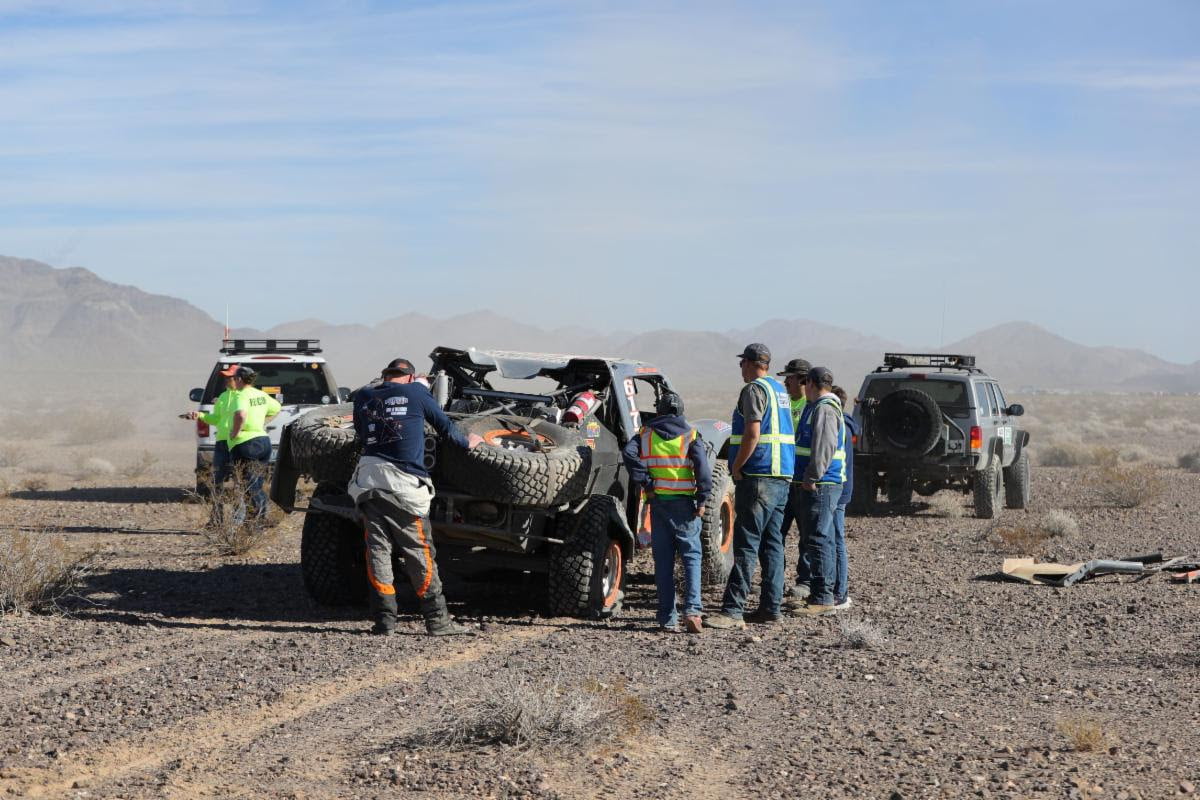 6177 Travis Williams went a little too hard and had a gnarly crash at qualifying. Both himself and co-driver Pete Tolar were advised by Motorsports Safety Solutions to go to the hospital and be checked out for precautionary measures. Dr’s were able to clear them with a clean bill of health to participate in Saturday’s race. The team worked tirelessly throughout the night to have the truck ready for the green light the following day. Williams managed to work his way through the field to bring home a 6th place finish.
1035 Mike Coulter came to defend his 2021 Class Championship and he managed to do just that. By driving smart and having a great team behind him he was able to take home the class win. 1011 Scott Bassett kept Mike on his toes the entire race but wasn’t quite able to get around him. Scott finished strong to bring home the 2nd place finish. 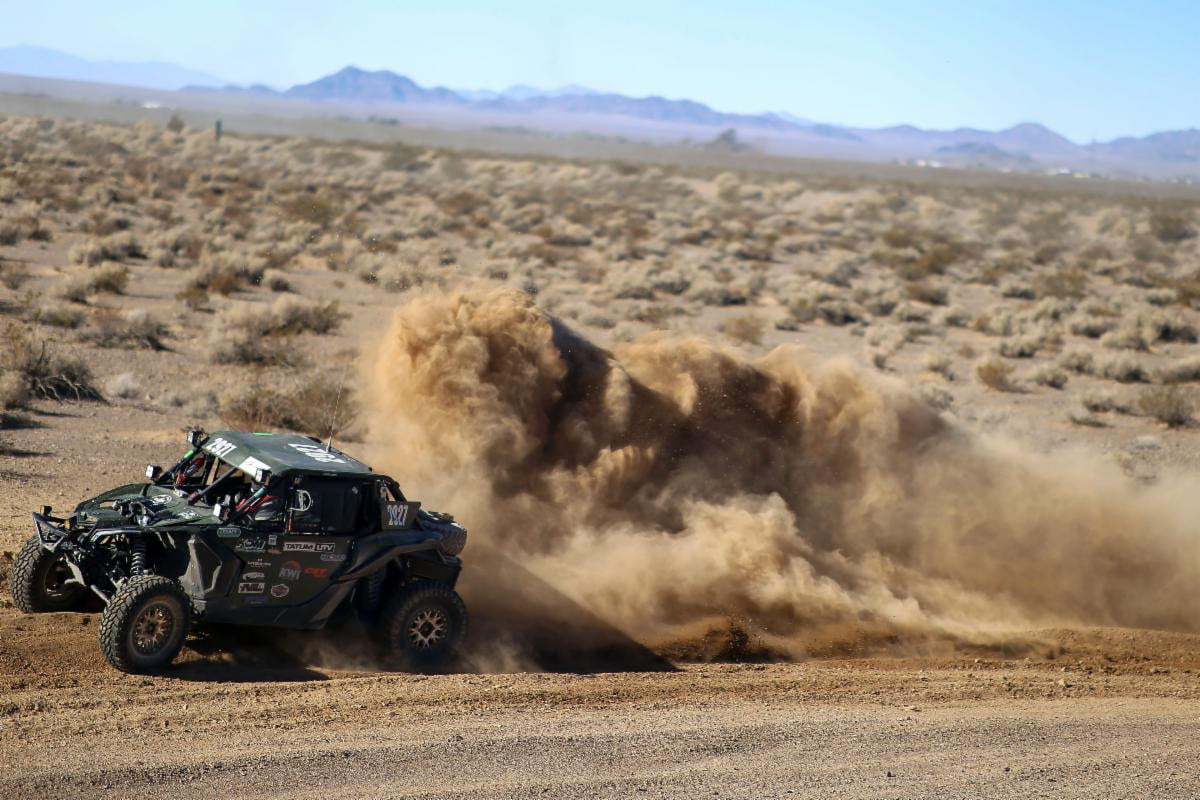 In an unexpected twist of events in the UTV’s, 2927 Nolan Williams in his Unlimited UTV passed all the Turbo UTV’s to be the very 1st UTV across the finish line. He not only took home first in his class but also the Overall fastest UTV with a time of 4:09:54.

In UTV Turbo, T916 Jeremiah Scott got around fastest qualifier T924 Garrick Lastra mid-way through the race and never looked back. He crossed the finish line 1st and took home the class win. Keeping Scott on his game from start to finish was the T810 Andrew Blood. Andrew drives his car completely by hand controls because of a non race related accident many years earlier that left him paralyzed from the waist down. He and co-driver Jon Turner had a flawless day to bring their Turbo UTV home in 2nd place proving that patience and perseverance will let you accomplish anything you put your mind to.

Fast charging T938 Colton Hustead had a rough go at this event 1 year ago, his vehicle suffered mechanical issues on the way to the start line and was unable to take the green flag. This year he was out for redemption. He set a fast pace early on until brake issues would cause him to slow down and force him to run a conservative pace to the finish line. He would redeem himself from last year with a 3rd place finish. 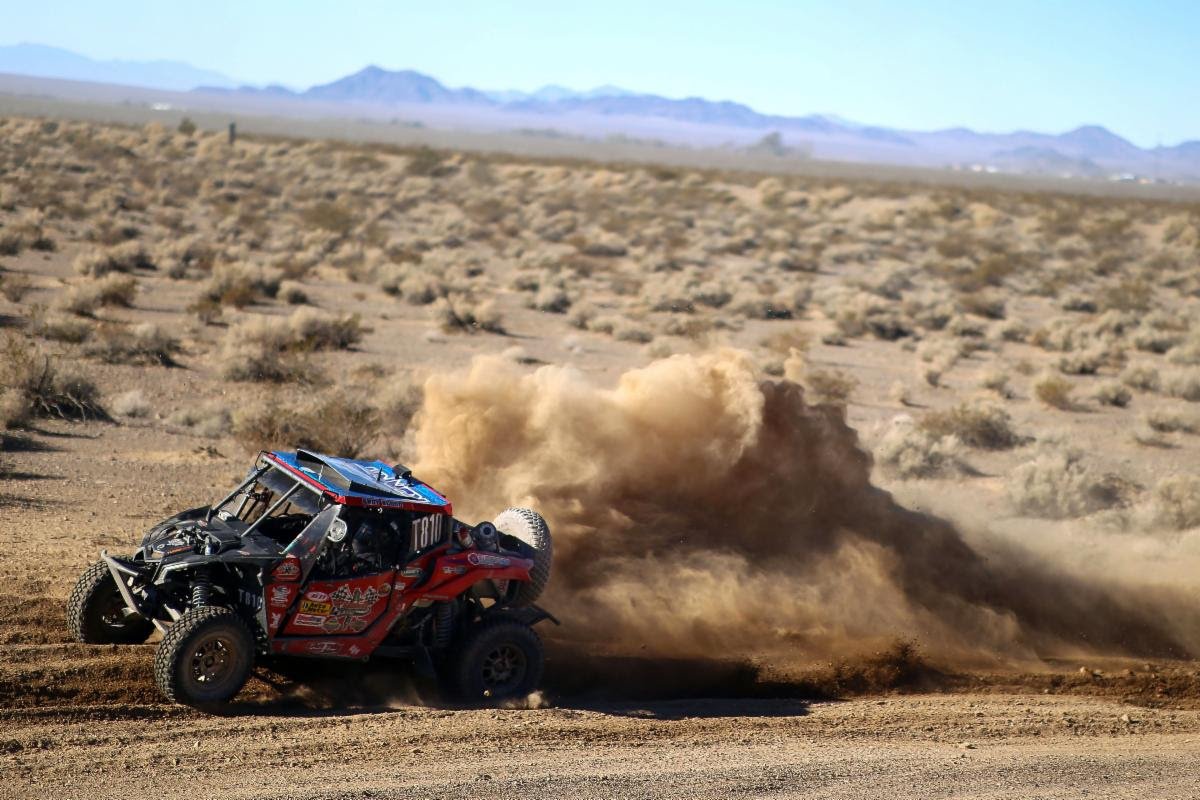 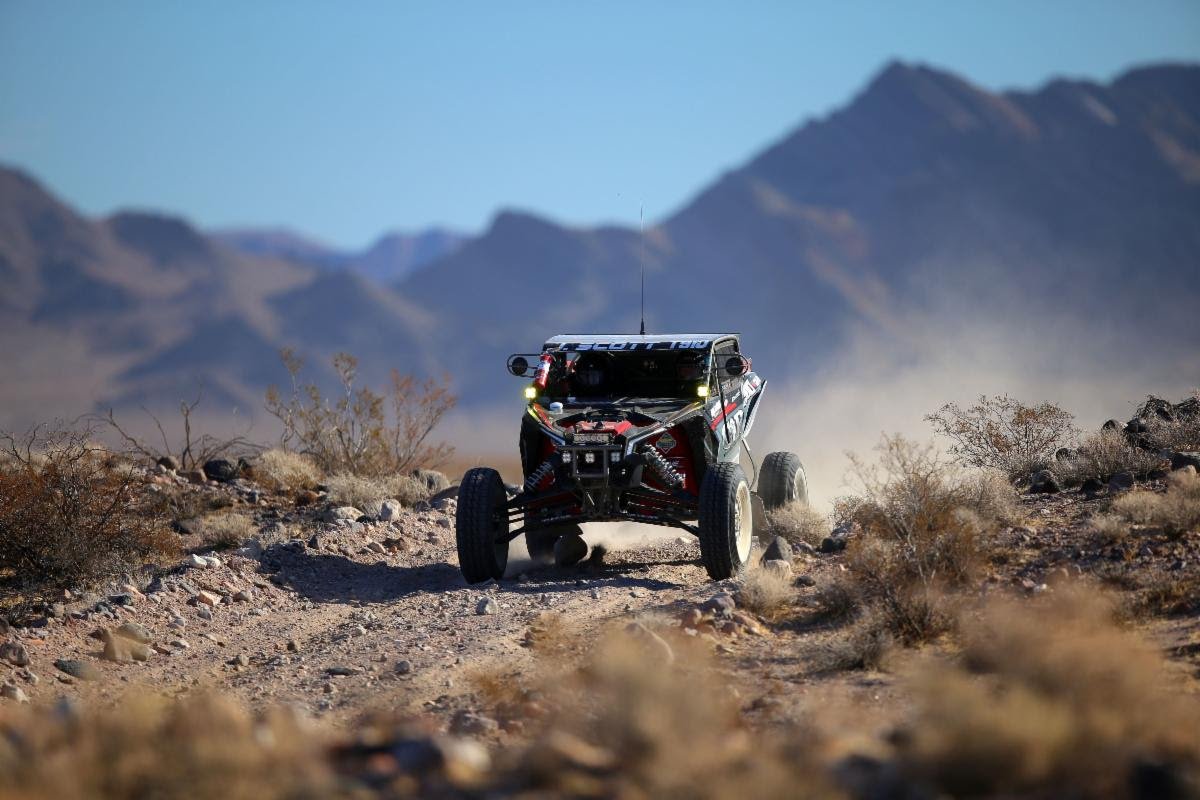 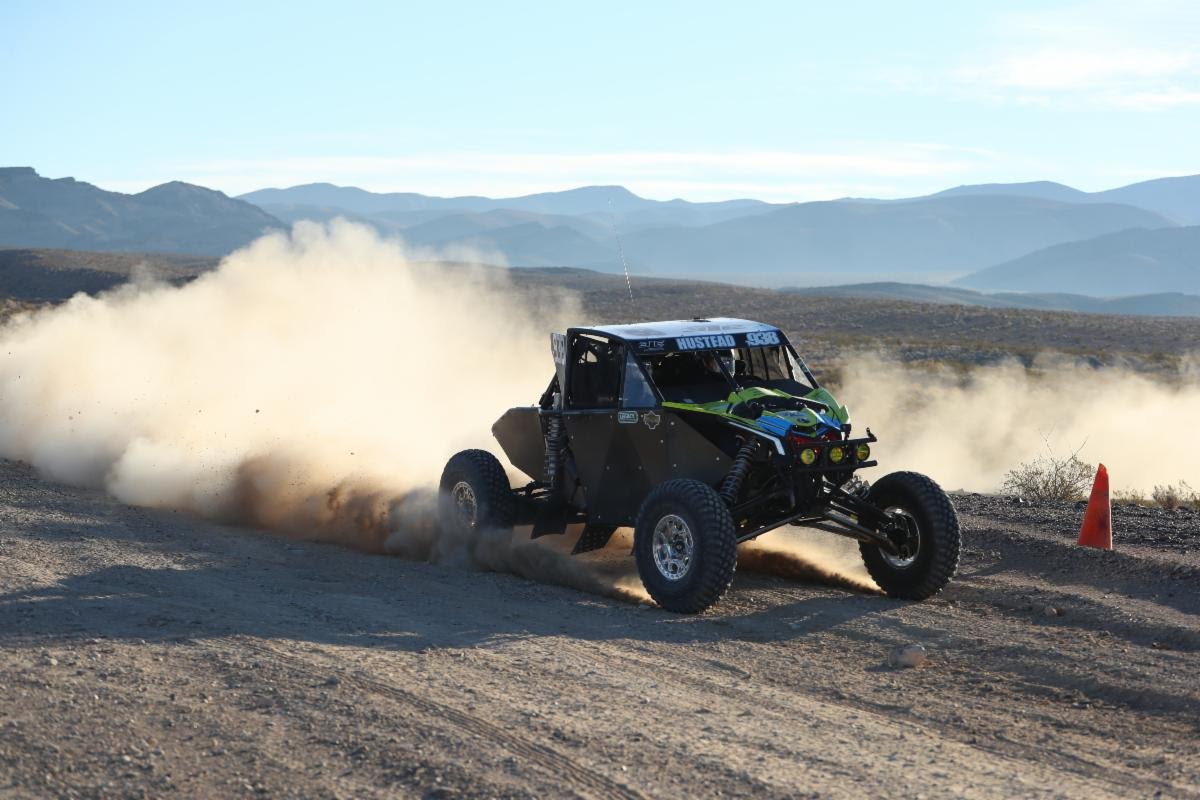 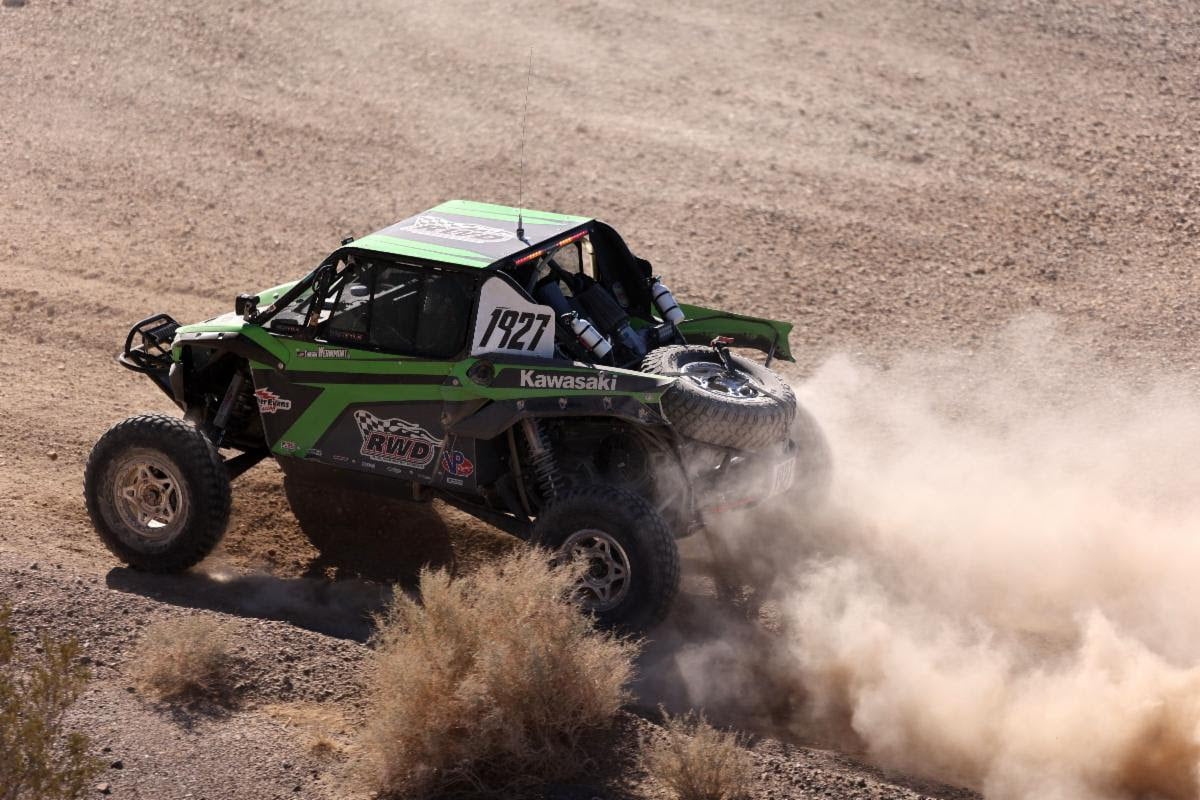 New to Legacy for 2022, 1927 Carson Wernimont brought out his Kawasaki Naturally Aspirated UTV. Carson was able to secure 1st place in class and beat the Turbos on corrected time to lock in 2nd overall UTV.

1957 Joe Bolton came out to battle against his son Austin in 1956 and teammate Matthew Banuelos in 1981. Joe was able to secure 2nd place, just 3 minutes ahead of Austin. 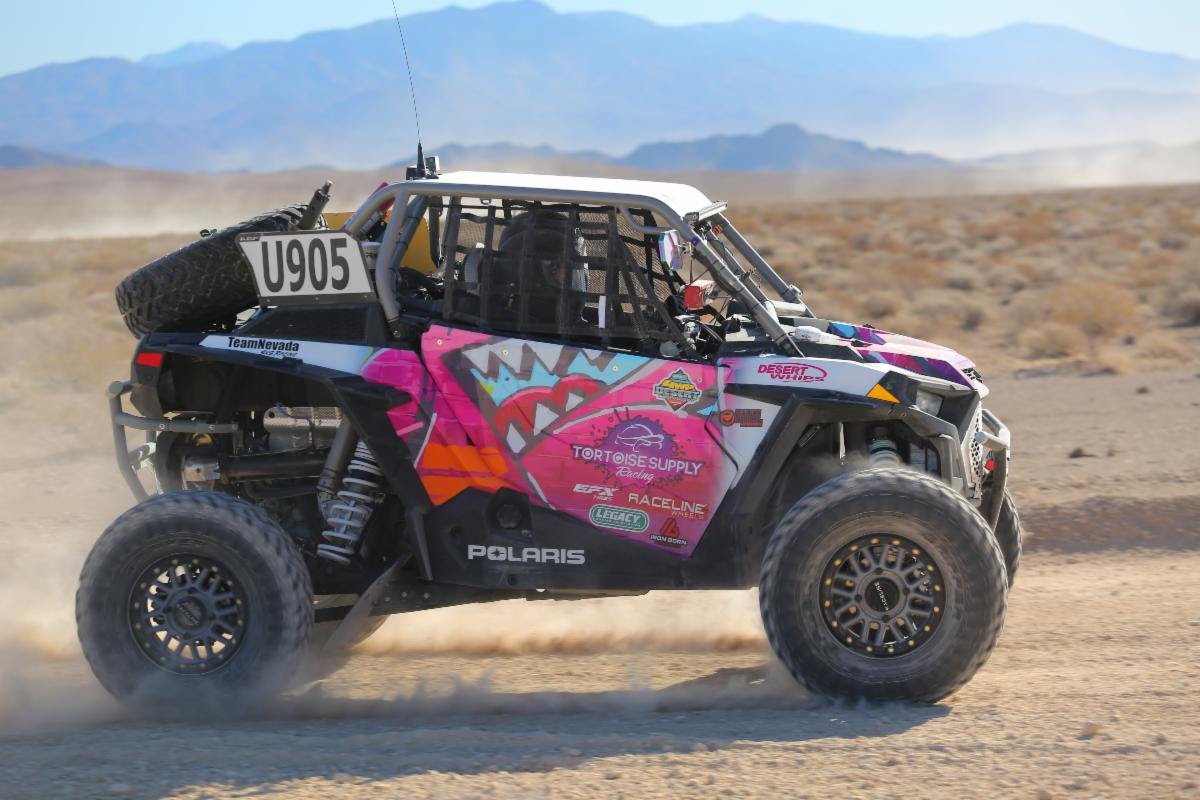 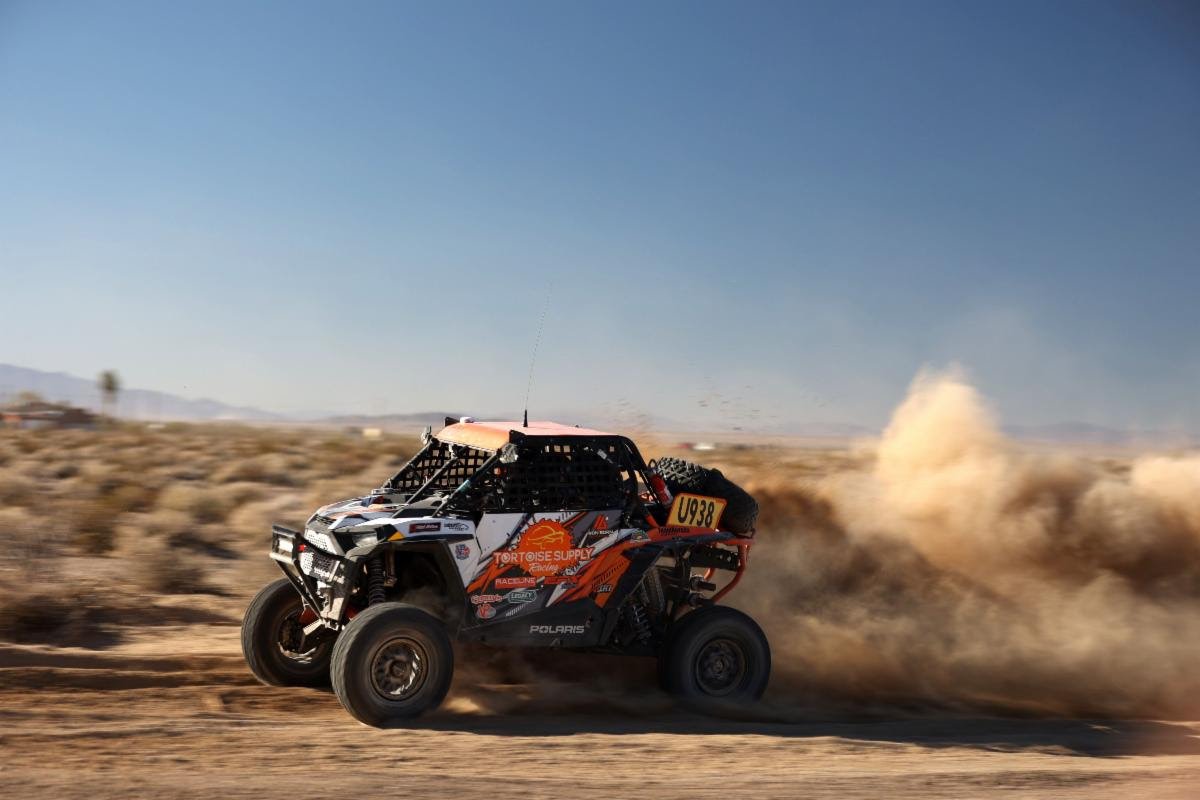 The Stock UTV class saw husband and wife battle it out. It started right after the green light as U905 Sarah Stewart started 1 minute in front of husband U938 Tyler Stewart. Tyler was able to get around Sarah before Pit 1 and keep in front for the remainder of the race. Sarah being new to long distance racing was able to keep a good pace behind Tyler. He was able to secure 1st place and Sarah snagged 2nd. We can’t wait to see how this duo will end the season. 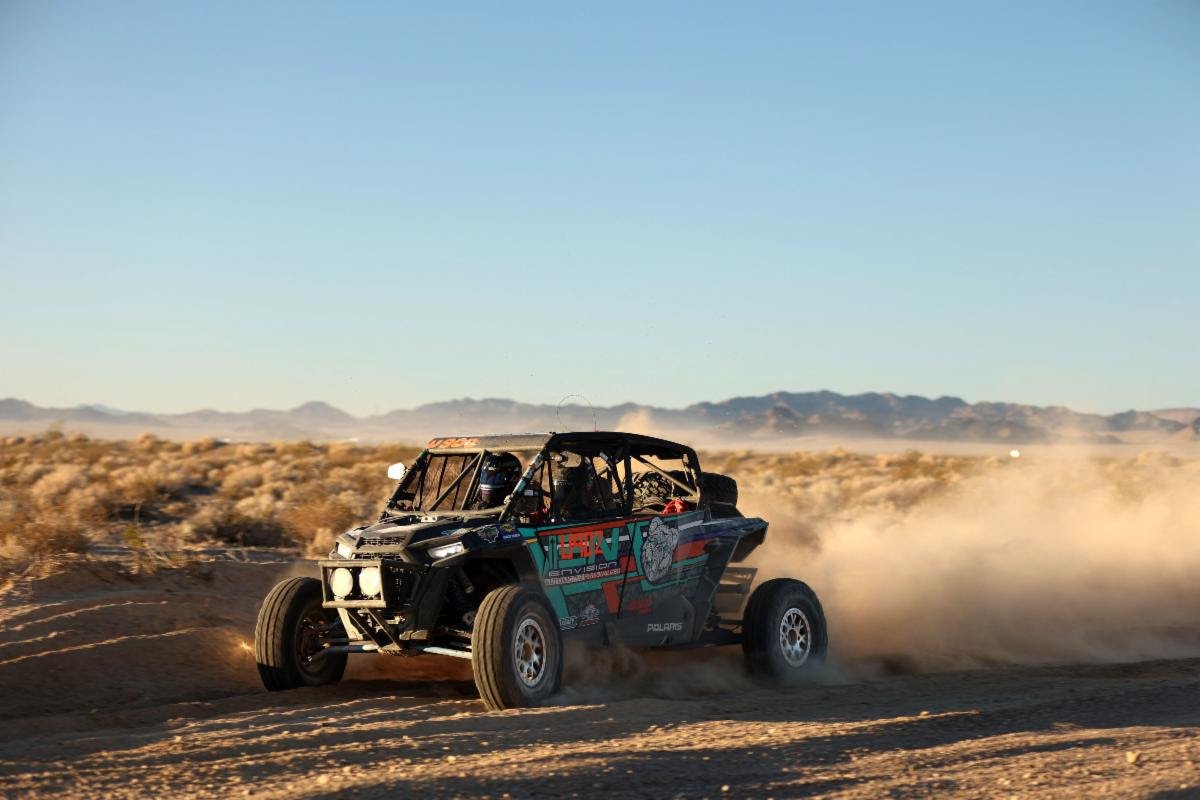 As U902 Gavin Wardle rolled into the finish line, he was happy to finally make it. He broke off his front passenger side wheel just past pit 1 and he had to chase pit closing times for the remainder of the race. In 2021 Gavin was the very last finisher at the 4WP Desert Showdown and he was certain he had earned the same title in 2022. As he was talking about the adventure of his day with his co-driver and father, Chris, another race vehicle drove up to the finish line. As we told Gavin what just happened he was ecstatic to not be last. Chuck Dempsey drove the 6155 Kirk Harkey truck in as the last finisher. They had some wheel problems just before the finish but were able to get it repaired and make it to the finish. 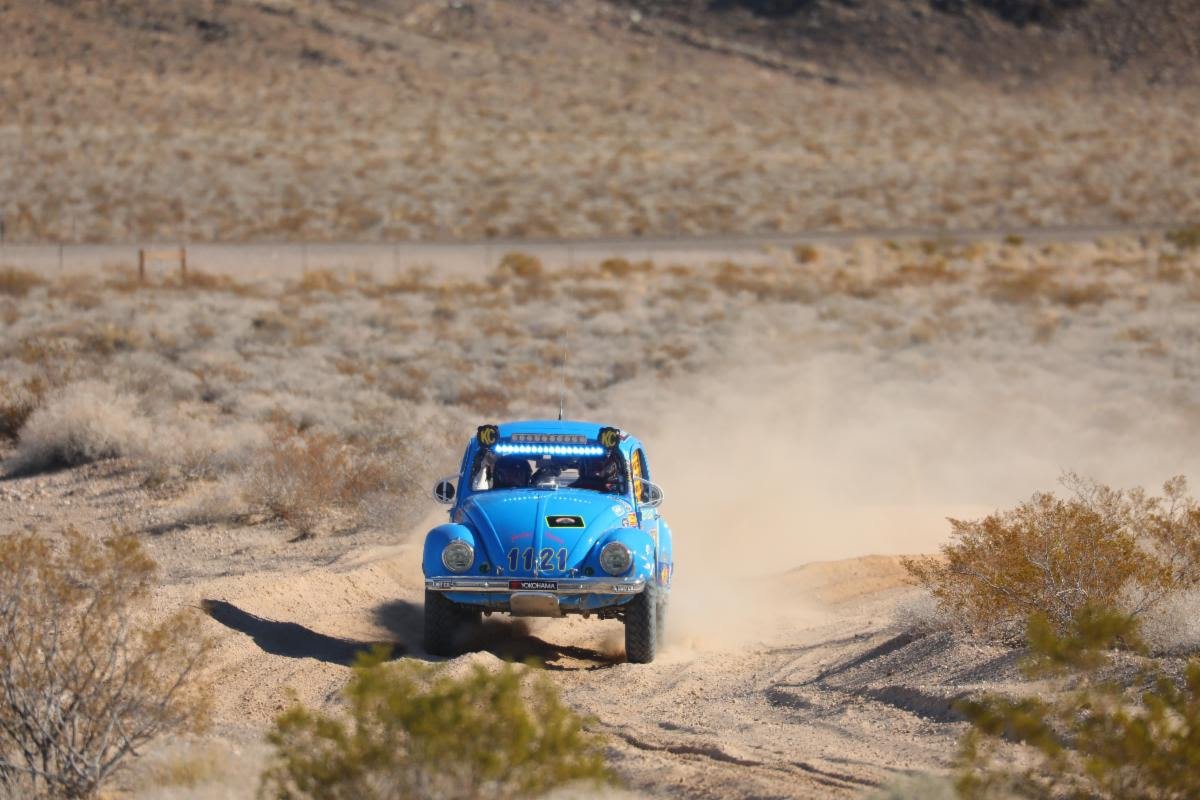 The crowd and local favorite for the weekend was Pahrump resident Garey Leavitt in his Class 11 VW bug. As we watched Garey leave the start line we noticed that there were just as many phones out to record him as there were for the first vehicle off the line. There is something magical about a Bug bouncing through the desert. The #1121 bright blue Bug had quite the crowd of spectators waiting at the finish line.
We want to give a huge shout out to those who made this event possible:
Title sponsor 4WP for their continued support as title sponsor of this event and as a brand Partner of Legacy Racing.
The town of Pahrump for coming out to support the off-road community.
Pahrump Nugget for being the Host Hotel and for welcoming us with open arms.
The Nye County Sheriff Department and NDOT for keeping all the participants safe on the highways and at the road crossings.
The Bureau of Land Management, Pahrump Field Office for their willingness to work with us and make things happen. Thank you James, we appreciate everything you and your team does for Legacy.
Thank you to Quantum Motorsports and Diamondback Materials for allowing racers in both Pro Turbo and Class 6100 to compete for a massive pay day.
To all the Volunteers who come out and sacrifice their time to make these events safe for both the public and the race vehicles.
To all of our Brand Partners for supporting Legacy Racing. 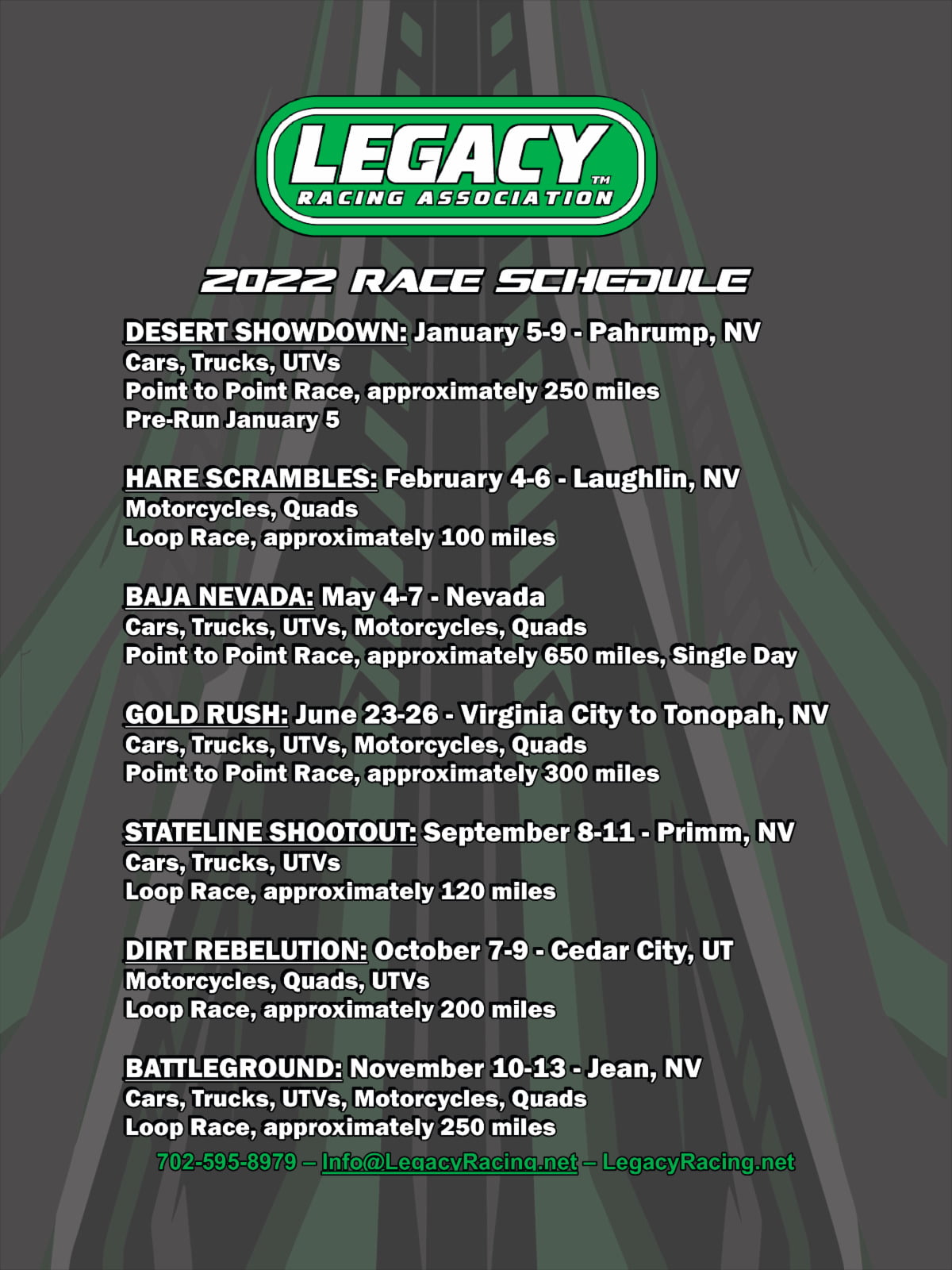