Legends and rookies celebrate on Stage 4 of 2020 Dakar 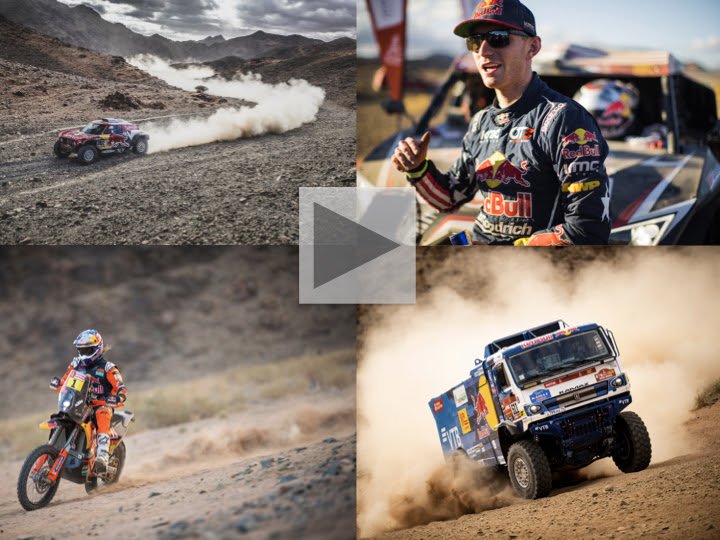 As the dust settles on a dramatic Stage 4 of the 2020 Dakar Rally, so the leaderboards across all five categories start to take shape. With close to 2,500 kilometres traversed through the stunning landscapes of Saudi Arabia, we’re beginning to see who has put themselves in pole position for glory at the first Middle Eastern Dakar.

A battle royale is developing in the car race with Monsieur Dakar himself, Stéphane Peterhansel (FRA) winning his first stage in Saudi Arabia. Peterhansel’s victory on Stage 4 has propelled him up the rankings to third overall.

“Today was the best day since the beginning of the rally. We didn’t do too many mistakes, we were lost for about three minutes in total.” – Stéphane Peterhansel

There were also encouraging performances by Giniel De Villiers (ZAF) and Kuba Przygonski (POL) as they attempt to stay in touch with the podium places.

In the side-by-side race there was a first ever Dakar stage win for the debutants of Red Bull Off-Road Team USA. Mitch Guthrie Jr. (USA) and his co-driver Ola Floene (NOR) have backed up an impressive start to the Dakar by arriving in Al Ula quickest of all SxS competitors. The result has propelled Guthire Jr. to sixth overall, just half an hour behind race new leader Jose Antonio Hinojo Lopez (ESP). Chaleco Lopez (CHI) is in second, three minutes off the summit.

“We had no flats or any other problems, we were able to keep it moving all day.” – Mitch Guthrie Jr.

“We’re staying in contention and looking forward to the second week. I’m not looking to bash myself up or bend the bike.” – Toby Price

Top placed female biker Laia Sanz (ESP) was pleased with her ride on Stage 4 as she broke in the Top 25 overall.

“It was a long day, but I’m more happy than I was with the last two days. I was able to enjoy the stage and also improve my result today.” – Laia Sanz

The overall lead of the truck race has changed hands thanks to a 1-2-3 result for Team Kamaz Master on Stage 4. Anton Shibalov (RUS) led home team-mates Andrey Karginov (RUS) and Dmitry Sotnikov (RUS). 2014 Dakar winner Karginov is now out in front in the truck class, having leapfrogged Siarhei Viazovich (BLR).

“It was a really crazy day today, such a difficult stage. The rocks were so dangerous and we needed to take care to avoid any big problems.” – Anton Shibalov

A third stage win from four days of racing has increased the advantage Ignacio Casale (CHI) holds at the head of the quad contest. Casale’s closet competitors is now over 20 minutes behind him.

Tomorrow brings with it Stage 5 and those who remain in the Dakar convoy will be plunged deep into the dunes. Huge descents over desert grass will test each and every competitor as they tackle the 353-kilometres timed special stage between Al Ula and Ha’il.

Stéphane Peterhansel: “Today was the best day since the beginning of the rally. We didn’t do too many mistakes, we were lost for about three minutes in total. We also had a puncture so that cost us another three minutes. Our stage was not perfect, but there was no big, big mistakes. The landscape was beautiful again, really different between the start and the finish of the stage.”

Carlos Sainz: “The last 100 kilometres was as difficult as anything I’ve ever done in my Dakar career. So many rocks and so difficult to find the way. I tried to follow some motorbike tracks, but in a car it’s not always possible to pass through these routes. When you finish a stage like this without major problems it’s like a victory.”

Nasser Al-Attiyah: “We did a really good job today on a very tricky stage. We tried to push on the last part of the stage, but this was not easy. We didn’t take any big risks and thankfully we were able to avoid punctures today. These first four days have felt like 10 days, very difficult stages. Tomorrow it looks like we have some sand dunes coming.”

Giniel De Villiers: “There were big fields of rocks that we had to get through. I had three punctures again and I had to do the last 100 kilometres without anymore wheels. This was very stressful. It wasn’t a perfect stage, but we made it here. These stages are proving to be very, very tough.”

Kuba Przygonski: “It was only Carlos (Sainz) in front of us. His tracks were hard to follow so it was like we were opening the stage ourselves. In the last part, among all those large stones, we slowed right down. We got two punctures and then we knew we needed to stay calm to get to the finish.”

Mitch Guthrie Jr.: “We had no flats or any other problems, we were able to keep it moving all day. Now it looks like we may have won the stage. No matter what, I’m really happy with how today went. My co-driver Ola (Floene) killed it!”

Sam Sunderland: “I started off the stage in a lot of dust so I had to be really patient. Just before the second refuelling point I managed to pass all the guys in the group in front of me. After that I could push and keep a good rhythm until the end.”

Toby Price: “We’re happy with where we’re situated in the race right now. We’re staying in contention and looking forward to the second week. I’m not looking to bash myself up or bend the bike. To be at the front trying to navigate with all these stones and rocks, you need to be looking in two places at once.”

Matthias Walkner: “It was a frustrating day for me because I messed up two notes just at the end. It can happen like this, one day good and one day bad. I’m not happy to lose time, but the feeling on the bike is good and I’m safely at the end of other stage.”

Luciano Benavides: “Navigation was tricky today. I got lost many times trying to find the right way. I also crashed once, but I’m OK. I’m ready for tomorrow and to do a better job than today.”

Laia Sanz: “It was a long day, but I’m more happy than I was with the last two days. I was able to enjoy the stage and also improve my result today.”

Anton Shibalov: “It was a really crazy day today, such a difficult stage. The rocks were so dangerous and we needed to take care to avoid any big problems.”

Dmitry Sotnikov: “The stones made it so tough for us on this stage, like they have done on the previous stages. We had to take care when we were overtaking. We stopped to give our team-mate Eduard Nikolaev one of our spare wheels. After that we tried to push, push, push and I think it’s been a good day for Kamaz.”

Ignacio Casale: “It was another good stage for me. It was tough with a challenging mixture of terrain. Many rocks. Rocks, rocks, rocks and more rocks. I lost a tyre 70 kilometres from the finish and after that I brought down my speed to make sure I could finish the stage.”