L’Estage takes down Higgins in the closest fought snow rally in US history! – race-deZert.com

In Lewiston, Michigan the Rally America 2013 Championship got off the ground with the SnoDrift rally.  This year’s event benefited from a gentle but steady supply of fresh snow falling in the well below freezing temperatures leading up to the 2 day event. This weather combination created more reliable grip for competitors as they flew pin balling down the stages.

Why don’t they just use studs?  Rally cars have to use public roads to transit to and from the official special stages where the real racing takes place. As street cars do, they have to adhere to local DOT laws. Michigan is a state which does not permit the use of studded tires on their roads so the rally teams are left to do their best on highly specialized but non-studded winter tires.  It makes the SnoDrift rally one of the most technical and demanding rallies for drivers and serves as the best equipment equalizer in the championship.  “Not much compares with the feeling you get trying to slow down for a Right 3 on ice at 100mph. We’re straddling a very fine line between success and stuffing it big time!”  Andrew Comrie-Picard- Scion Rally Team. 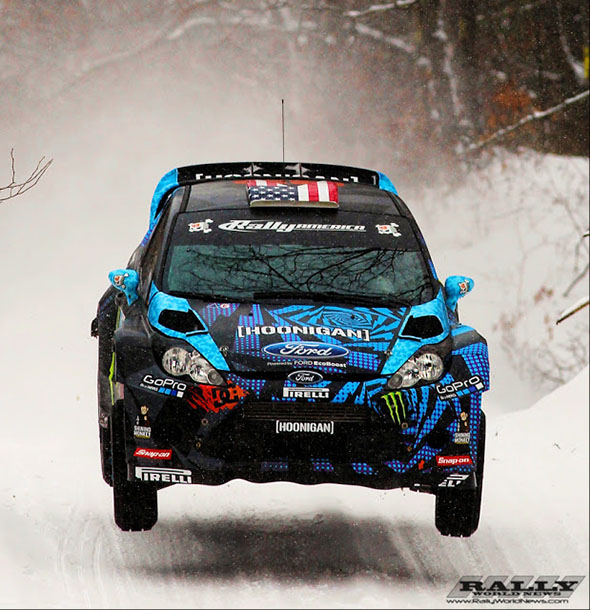 Day 1 was 8 special stages with three of them run in the night time. In Open class (the fight for the overall win) fans were poised and ready for a great battle between last year’s national champion, David Higgins up against Antoine L’Estage and Ken Block. All three drivers represent different manufacturers, Subaru, Mitsubishi and Ford in that order.  Ken Block only ran two Rally America events in 2012 and won them both, now he’s committed to the full season.  In fact both other drivers each won two events as well in 2012 proving that David’s consistency is what wins championships.

These guys came out on SS1 like they each wanted to smack the other in the face. The talk before the rally was all about feeling it out and making sure to make the end of the rally but what I saw on SS1 was that these guys each wanted to send a clear message of the pace they were willing to run for a win.  SS1 saw only 7 seconds between the three drivers with David Higgins pulling off a 4 second lead.  As they battled for SS2 we heard reports of a few snow bank encounters here and there but they came in with a tight margin again.  At the start of SS3 Ken Block was struck with an electrical problem that turned out to be a failed alternator and he was officially out of day 1. 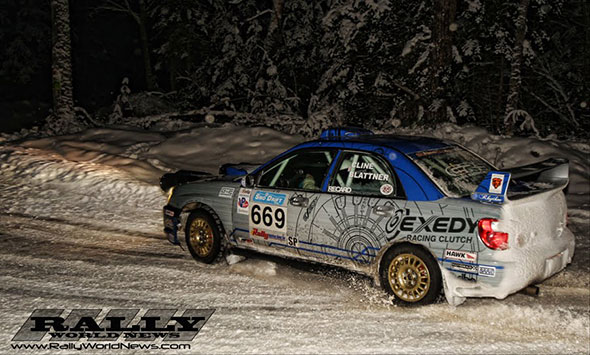 Evan Cline put together a great start to his Super Production season driving smart and pulling out a solid lead over rivals Mason Moyle and Nick Roberts ending the day more than 7 minutes ahead.  Last year’s SP champion, Lauchlin O’Sullivan, was entered but was unable to attend due to last minute car issues.  2012 SP runner up David Sterckx was at the event and ready but also succumbed to mechanical failure of his gearbox likely related to his huge crash at Olympus last fall.

In 2wd, driving a newly built Scion XD, Andrew Comrie-Picard showed he meant business with his refined Canadian snow style. He vowed to drive quickly and feel out the new car while making no mistakes. It’s not ‘IF’ you make a mistake at SnoDrift it’s ‘how many’ and if you can drive clean you’re nearly guaranteed a good result.  By the end of Day 1 ACP had squirreled away 1 minute and 18 seconds of cushion over Dillon Van Way in his Ford Fiesta who had a flat and Eddie McNelly who had 2 flats on his Fiesta. 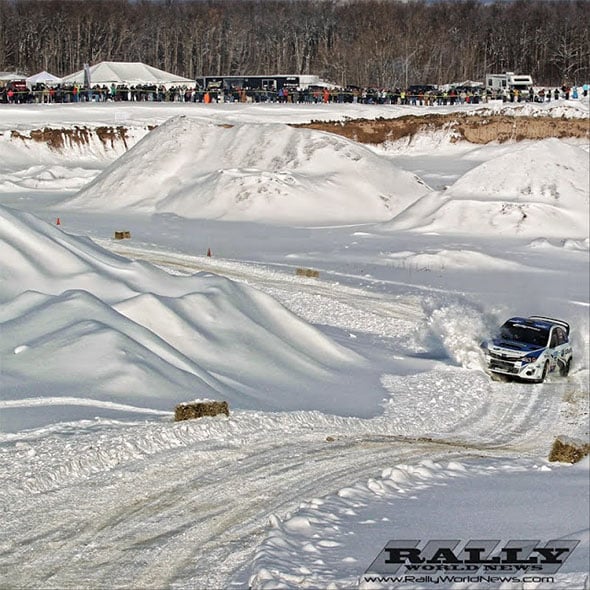 Day 2 for Super Production was another great day for Evan Cline and his Exedy Clutches Subaru proving this was the best drive of his career as he continued to zoom along adding to his lead in class. He even managed to take the biggest jump of his career on SS16 still baffled from how far he flew when we talked before the last service.   Mason Moyle had been taking it a bit easy on Friday and newcomer Nick Roberts managed to slip past and gain over a minute advantage.  Mason was having none of it Saturday and turned up the wick to consistently take time back 10-20 seconds at a time all day Saturday to claim second place in SP.  Nick, finishing 3rd in SP in only his second rally was still quite happy with his weekend’s work.

Pushing along and having fun in the new Scion XD, ACP and Jeremy Wimpey loudly barked their way along on Saturday.  By avoiding mistakes they were set to sail to a well deserved victory for the Scion Rally team. In their third year of competition they’ve managed to turn a lot of hard work into one of the smoothest running and professionally presented teams in the sport. 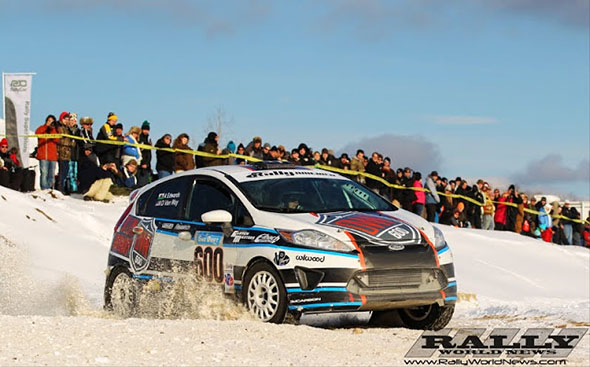 Dillon Van Way pushed along ready to capitalize on any misfortune for the Scion boys. Dillon has imported a new codriver for the season. Andrew Edwards hails from Wales and brings WRC Academy experience to the Ford team.  Eddie McNelly and Ole Holter had a few more adventures on Saturday of the event but were able to bring their Fiesta R2 home in third managing to avoid any attacks from Chris Greenhouse and his powerful Dodge Neon. Chris was having a fine time juggling a hay bail on his hood as we can see here:

B-Spec Championship- Among the new developments in the 2013 Rally America Championship, they are adding a national class called B-Spec. This class gives competitors a chance to race in relatively lightly modified vehicles and will keep score for the manufacturers’ championship as well.  James Robinson’s Honda Fit won the class here at round 1, we hope to see some more competition from Ford and Toyota as we move forward in the season. 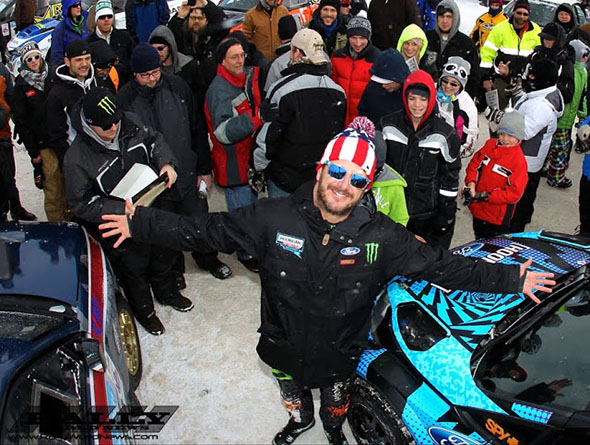 Day 2- Ken Block uses new ‘Super Rally’ rule to reenter the event. Super Rally has been common in the World Rally Championship for a few years, it is a rule which establishes a time penalty per missed special stage for a driver who has crashed, broken down or otherwise failed to finish a day of competition.  The 6 stages Ken didn’t finish on day 1 equated to around 18 minutes of penalty time added to his score but he was back in the event and still able to drive for drivers and manufacturers championship points.  He started the day 11th overall and made up over 15 minutes to eventually finish 6th overall and score 8 points for his championship which may come in very valuable later in the season.
Super Rally Rules- http://www.rally-america.com/RuleBulletin/Rule_Bulletin_2013_006.pdf

Separated overnight by only half a second, David Higgins and Antoine L’Estage squared up on the 2 way battle at hand and absolutely went for it on stages 9-13.  Each driver winning a stage over the other here and there, both drivers with over shot intersections and had brief excursions off through snow banks handing time back to the other.   At the mid day service break David and his codriver Craig Drew had a 3.5 second lead, at the final service they held a 12.7 second lead going into the last three stages of the event.

On SS18?? the Subaru drivers put another 9 seconds on Antoine and his codriver Nathalie Richard. This 21.3 second deficit was beginning to look like their fate was sealed to outsiders.  Antoine really likes long and technical stages and 15 mile long SS19 was just what he needed to put his head down and go for it. Making up all but 1.4 seconds of the 21needed Antoine brought the fight smack in David’s sight leading in to the last state of the rally.   Antoine said something to me that was basically “Going into the last stage, I thought, this is it, I’m GOING FOR IT”

The Rockstar Mitsubishi flew through SS20 and managed to best Higgins for a rally win by 6.2 seconds.  I’ve never seen Antoine so happy and proud of their teams’ achievement.  The little shop with vast rally experience and passion run by John Buffum had managed to win a very close battle with against a manufacturer team and an accomplished rally driver with worldwide winning experience. Even though this was a significant victory for L’Estage it was hard to tell who the victor had been as they celebrated together in the bar later Saturday night. That’s one of the reasons I love rally.

I’ll leave you with this to consider, Ken Block, while technically out of contention to win this rally, still managed to win 5 Special stages on day 2.  He’s thrown his hat in the ring for this season and he wants to be Rally American National Champion badly.  Can he and Alex use their WRC experience and WRC level car preparation to pull it off or will the discipline of David and passion of Antoine be enough to keep the fight going all season?  He’s certainly going to have to work for it but he’s got to be feeling good going to 100AW as 6 time winner.  What do you think?

Keep up with me this season as I’ll be covering each of the Rally America championship and Global Rallycross ‘GRC’ events.  @MJRally on Twitter and Instagram and www.facebook.com/MatthewJohnson46

Matthew Johnson is a 2 time national champion rally driver in his PGT Subaru WRX, a spotter and test driver for Pastrana’s Dodge GRC team, he is the host of Rally America’s video event coverage, works in the automotive industry for brands like Audi, BMW, Ford, Chrysler and drives in on camera film productions.