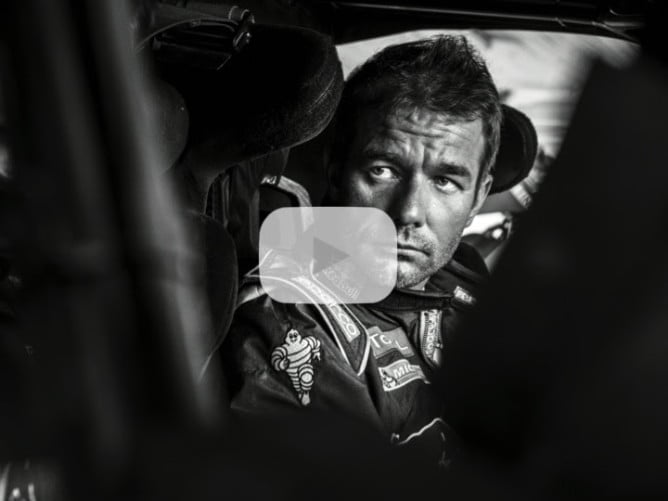 June 2015, Erfoud. A desolate corner of the Moroccan desert, inhabited only by a couple of hotels, the Red Bull-powered Peugeot Dakar team, and actor Daniel Craig: in town (if it can even be called a town) with a film crew to put the finishing touches to ‘Spectre’ – the latest James Bond film, in cinemas everywhere at the moment.

Just as momentous was the presence of another global superstar: nine-time world rally champion Sébastien Loeb, sampling the Peugeot 2008 DKR for the first time, in secret.

The Frenchman was in the midst of his second World Touring Car Championship season with Citroën, taking time out from his hectic schedule to try out something new, with experienced co-driver Lucas Cruz alongside him.

Before them lay a rock-strewn lunar landscape, reminiscent of the sort of terrain that is common on the Dakar. Loeb had seen rocks and gravel before of course, but nothing quite like this…

The thing that was preying on his mind was that it was partly familiar, and partly not. His first drive in the Peugeot 2008 DKR – a brief foray into the endless countryside, negotiating a few relatively gentle tracks and bumps – confirmed the initial impression.

“Of course I feel at home in a rally car, but this is very different to any rally car I have tried before,” he said, emerging from the cockpit. “But it’s not actually the driving that is unfamiliar: it’s more the pace notes. Or rather the absence of pace notes, I mean. There are notes, of course, but you have to go and look for the road for yourself. And what I have always been used to is expecting the road in front of me: both from the recce and from the pace notes, which are really accurate in WRC. Here, it seems to be much more about improvisation.”

Inexperience or not, the Peugeot Total team was instantly impressed by Loeb’s technical feedback after only a short run in the Dakar car. The Frenchman was of course familiar with the Peugeot team members, composed of largely the same people he worked with during the Red Bull King of the Peak campaign in 2013, when Loeb and Peugeot shattered the Pikes Peak record together in America.

“Sébastien delivered exactly what we expected of him and what we remembered from Pikes Peak,” said Bruno Famin, Peugeot Sport team principal. “He’s a great champion for a reason and entirely professional in his approach.”

During his second run in the car Loeb ventured into rougher territory and the famous sand dunes of Morocco. He emerged astonished from the experience. “It takes a while to appreciate just how much punishment the car can take and the sort of obstacles that it can handle,” he commented. “In the WRC you’re accustomed to try and avoid obstacles, but with this car, you drive straight through them or over them. It’s a lot to get used to, but that’s a big motivation.”

For a restlessly competitive animal like Loeb, the biggest thrill is of course competition. And he finally got to make his rally debut with the 2008DKR in Morocco once more, at the Cross Country round in October. It was a baptism of fire for the Frenchman quite literally, as he was held up by a turbo fire on the first stage, and later rolled the car.

“I got an idea of the sheer scale of the event,” he said afterwards. “Five hours after we rolled, we still hadn’t seen anyone around: just a few other competitors in the distance. It was night time by the time the mechanics got to us, but it was still a great experience.”

Undeterred, Loeb got to the finish of the event – but the time lost meant that he was well down the order.

The challenge is huge. But finally, it’s a challenge that the most successful driver in the history of rallying has now decided to accept at the Dakar. Here, unseen and uncut, are Loeb’s first experiences of the car that is hoping to become as legendary as he is.

A special feature with Sébastien Loeb will be available in the January edition of The Red Bulletin in all languages. Click here to read the feature online in English or grab a copy of the magazine at your local kiosk to read more on this inspiring adventure.