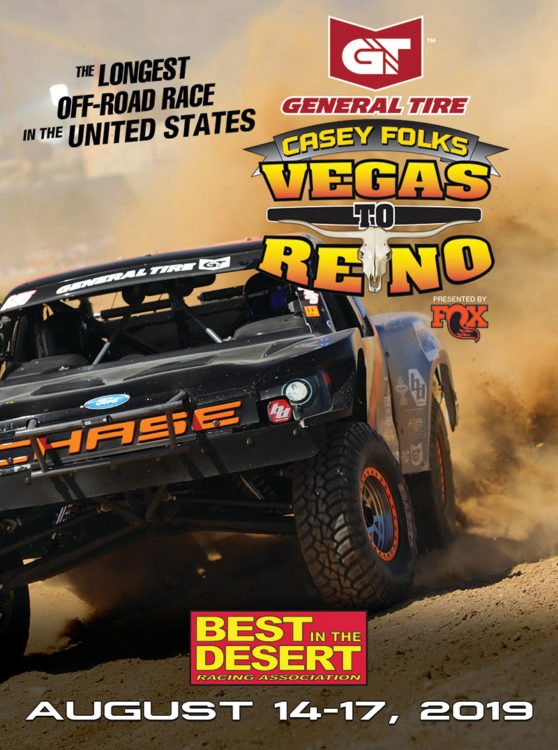 Las Vegas, Nevada  August 7, 2019     When the green flag drops on August 16, just outside Beatty, NV the most competitive field ever will do battle at “The Longest Off–Road Race in the United States,” The General Tire Casey Folks “Vegas to Reno” presented by FOX. With 370 teams pre-entered and chomping at the bit to take on everything the desert and mountains can throw at them between Vegas and Reno, the racing is guaranteed to be fast and furious. A heavily talent laden field of some of the best Trick Truck racers around today including multi-time V2R champ Jason Voss, Justin Matney, Bryce Menzies, Justin Lofton, Troy Herbst, Tony Smiley, Steve Olliges, Kevin Thompson, Tracy Graf, Anthony Terzo and others are locked and loaded and ready to take on the challenge. The battle for the overall car/truck win should be epic.

On the motorcycle side factory/support riders from Kawasaki, Honda and Husqvarna including teams featuring Jacob Argubright, Dalton Shirey, Shane Esposito, Danny Cooper, Skyler Howes  and Ty Davis are all ready to throw down. In fact a quick rundown of every class shows that each one is loaded from top to bottom with the best teams the sport has to offer all showing up to lay claim to a class win and champion of “The Longest Off–Road Race in the United States,” The General Tire Casey Folks “Vegas to Reno” presented by FOX. One thing for sure, whoever wins their respective class will have earned the right to be called, Best In The Desert.

This year’s running of the General Tire Casey Folks “Vegas to Reno” presented by FOX runs from August 14 through August 17. 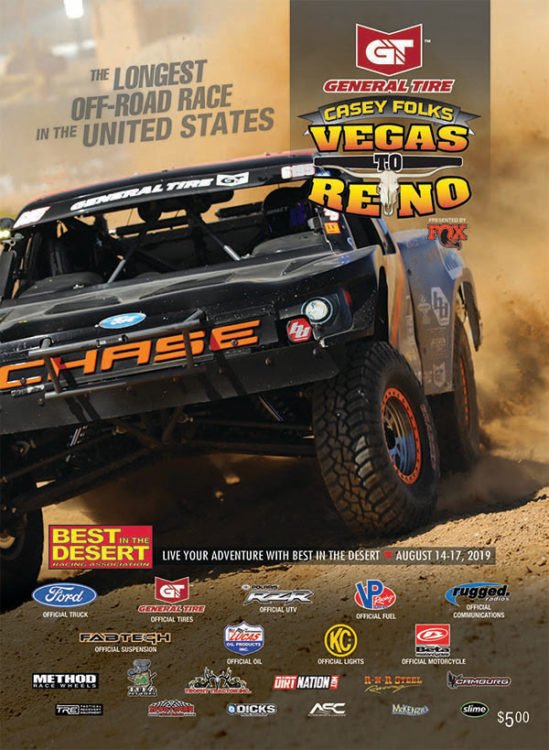 OFFICIAL PROGRAM
General Tire Casey Folks “Vegas to Reno”
presented by FOX
The Official Program for the event is now available online. It features up-to-date schedules, entries by class, contingency listings, and is filled with exciting photography and race updates.
GET UP CLOSE & PERSONAL AT THE EVENT EXPO AT TEXAS STATION
On Thursday, August 15, Racer Registration, Technical Inspection, and Contingency is at our host hotel, Texas Station, located in the parking lot of the Texas Station.Here race fans will have the chance to see an amazing collection of high-tech desert race Cars, Trucks, Motorcycles, Quads, and UTVs specially built for racing. Plus, hundreds of the off–road and racing industry’s top manufacturers will have their latest products and accessories on display for everyone to check out. You can also meet some of the most famous names racing in one of the world’s most exciting, exhausting and explosive events. Come on by Thursday, August 15 from 8 AM to 5 PM. Texas Station Hotel is located at 2101 Texas Star Lane, North Las Vegas, Nevada. The Discovery Channel TV Show Twin Turbos will be following a specially built Wounded Warrior Project Vintage Class 1969 Volkswagen, driven in part by show-member Doug DeBerti, a talented off–road racing driver, and a racing prodigy. The Wounded Warriors Project is a nationwide organization that helps wounded veterans on their return from combat. Look for the show later in the year on the Discovery Channel.

BEST IN THE DESERT WELCOMES JENSON BUTTON
Best In The Desert welcomes former Formula 1 champ Jenson Button back for his second event with us. The former champ is a welcome addition to the off–road desert racing fraternity. Looks like he got bit by the bug at our last race. Jensen is driving #6162 for Brenthel Industries.  We look forward to seeing both him and his team in Dayton.RACE SCHEDULE AND TIME TRIALS
Race-related events get started Wednesday, August 14, when the Trick Trucks, Class 1500 Unlimited Cars, and Class 6100 face off for starting order at Time Trials. Here the Trick Trucks and Class 1500 compete head-to-head for the $1000 “Team Ford Pole Award” and the chance to first overall stating vehicle. Class 6100 cars compete for the “Alexander Ford 6100 Fastest Qualifier” $1000 award and are the first to Truck to take the green flag in that class.

Racing at the 2019 General Tire Casey Folks “Vegas to Reno” presented by FOX starts early Friday morning, August 16, in Beatty, about 100 miles north of Las Vegas. First off the line will be the Motorcycles followed by the Quads. After a substantial delay for safety reasons, the Car, Truck and UTV classes will head out on their quest to reach the finish line at the Dayton Events Center with hopes of a class victory. Due to the long distance of the racecourse, a 24-hour time limit has been established, so racers may still be coming across the finish line well into Saturday morning, August 17. The Awards Presentation will take place Saturday evening, August 17, at the Sparks Nugget in Reno, Nevada.

GIVE YOUR OLD RACE SUITS A NEW LIFE!
Many of our grass roots racers utilize the pit services of Baja Pits and Mag 7 and without dedicated and passionate volunteers, these organizations wouldn’t exist.
April of 2018 in Southern Baja, 2 Mag 7 volunteers were severely burned while fueling and sadly Fabian Estrada lost his life one month later. At the time his wife was expecting their first son, he’s now 10 months old.
Please help increase everyone’s safety in our pits by donating your used driving suit at registration and our mandatory driver meeting.
“To honor Fabian, it’s my goal to educate and protect pit crew volunteers so racers like you and I can thank them at the finish line.”
If you won’t be attending Vegas to Reno, you can contact Jennifer Morton at 760-533-5991 or email: [email protected] to donate a suit. 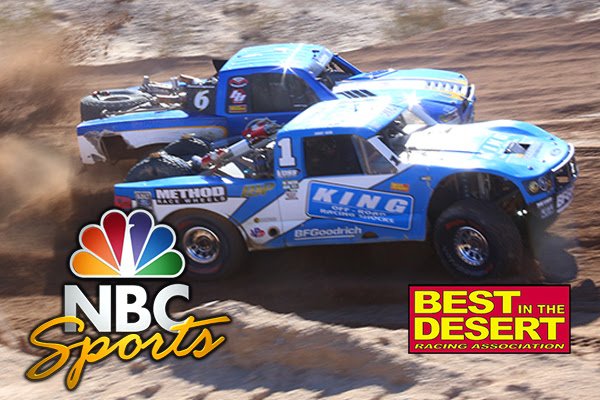 About FOX Factory For over three decades, FOX has been an industry leader in the design and development of high-performance shock absorbers and racing suspension products for snowmobiles, mountain bikes, motorcycles, ATVs, UTVs, off–road cars, trucks, and SUVs. FOX equipped vehicles and racers have stood atop podiums in every sport we have competed in — from the sands of Baja to USA deserts to the dunes of Dakar. Our team of engineers performs rigorous tests with our athletes year-round. The data we collect from performance testing and our application of that knowledge to our product is what separates FOX from every other suspension company.