Things are getting very interesting as the Lucas Oil Offroad Racing Series nears the end of its season. Last night out in Glen Helen Raceway for LOORRS first and only night race of the year, Round 11 went down and the points mix got real interesting. 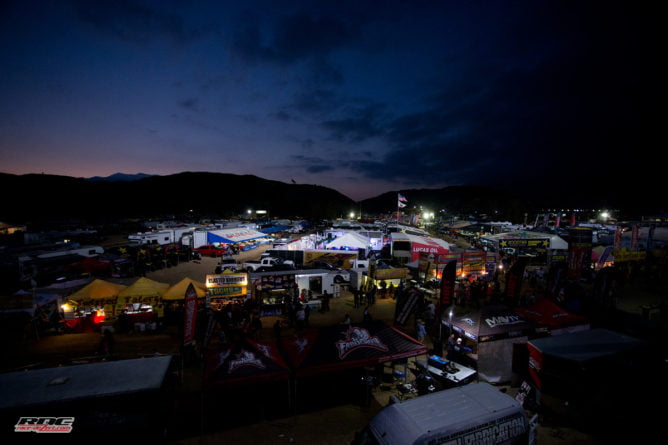 Normally the Glen Helen race is held in late July but with the addition of the new Wheatland track LOORRS put Glen Helen later in the year and it turned out to be a good move with the weather much nicer then years past. Instead of sweltering heat we were greeting with nice cool temperatures, but there was still heat on the track. 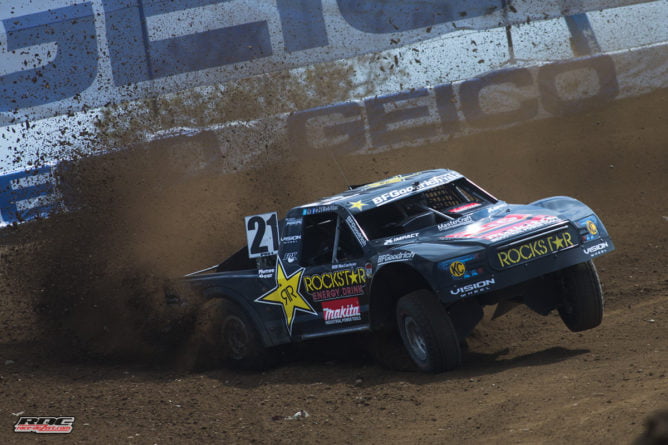 Pro 4 left the line after opening ceremonies with Kyle Leduc starting on the pole after qualifying first earlier in the day. Adding 1 point to his points lead for doing so, he would start the green flag with a 10 point lead over Rob MacCachren, and 19 over Carl Renezeder (who started next to him on the front row) so finishing ahead of them this race was crucial. 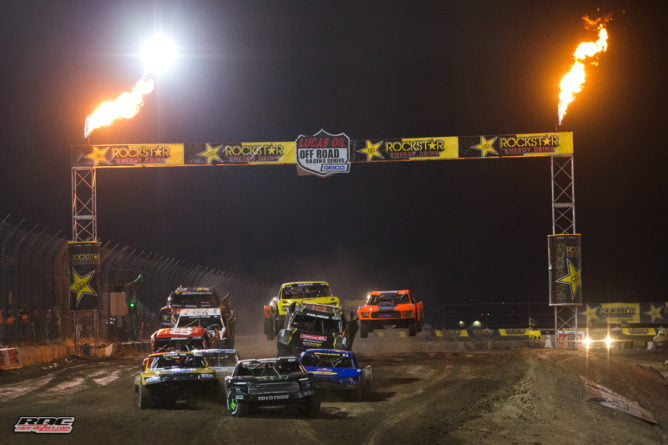 Leduc would get the hole shot and Bryce Menzies, fresh off his hot streak in Crandon, snuck by Renezeder in the first turn to take second place. Leduc held strong for the first 3 laps but Menzies was able to get by him leading into lap 4. A pack led by Menzies stayed close together with Leduc, Renezeder, RJ, Mittag, and Fortin all trailing close behind each driver trying to capitalize on any mistake the guy in front of him would make. 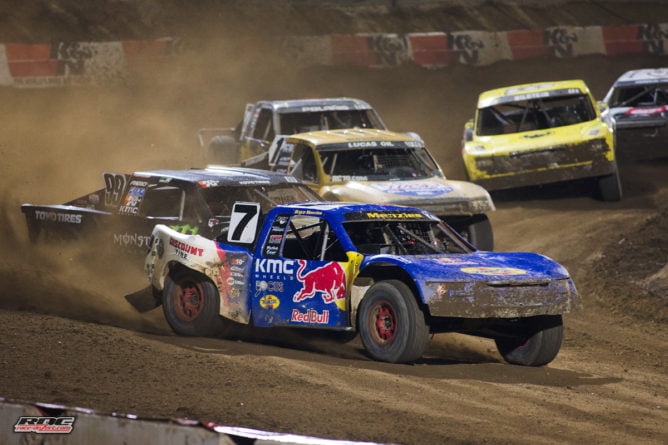 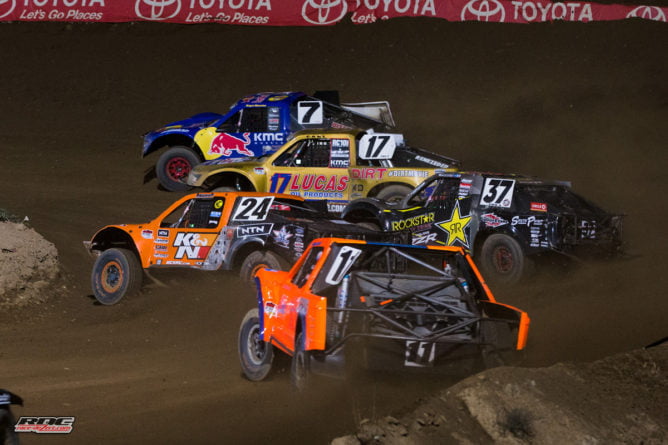 On lap 8 Leduc would land hard off the back table top while side by side with Renezeder and ended up spinning out and touching a k-rail, ending his race. Bryce Menzies would go on to win the race making it 4 short course wins in a row since Crandon with RJ Anderson finishing second and Bradley Morris finishing third. Where the points chase gets interesting is that Rob Mac finished in 4th place, five spots ahead of Leduc which means going into tonights race they should be tied for points. 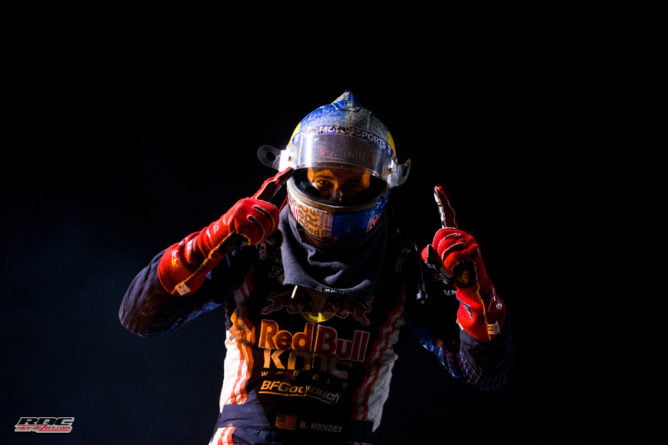 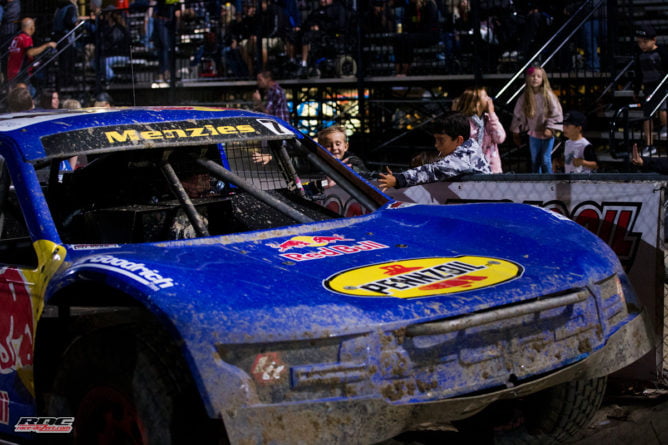 Prolite has been a close points battle since the beginning of the season between both Brock Heger and Jerett Brooks swapping both race wins and points leads. Coming in Brooks led by only 3 points but Heger dropped that to only 2 after qualifying first earlier in the day (top qualifier in each class get 1 point). The way the points work after a race is there are two points between each finishing position. 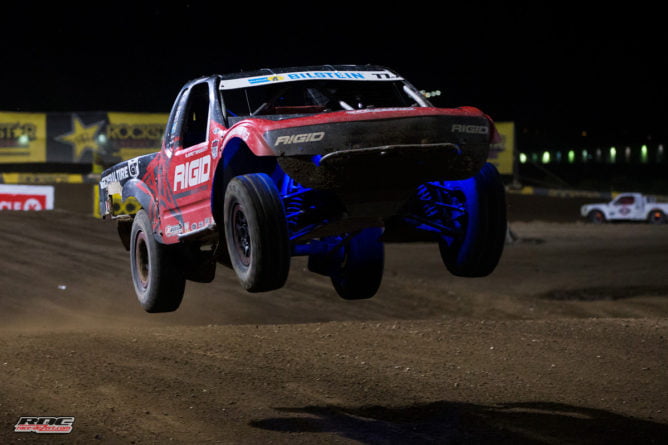 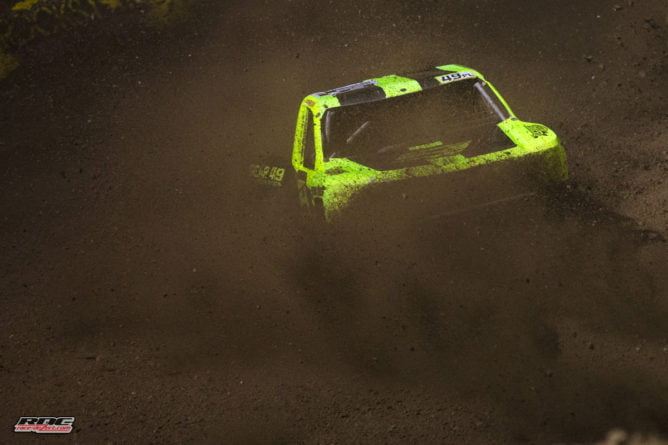 Ryan Beat started the race off in the lead followed by Heger and Brooks but a quick bobble in the last corner of lap 2 let the two of them get by and the race was on. Heger was holding off Brooks but a rear flat tire let Brooks get by along with the majority of the field. With only a few laps to go, instead of goinging into the hot pit to change the tire they made the decision to finish the race on the flat but with such a close filed Heger had to settle for an 11th place finish while Brooks won the race. That would mean Brooks gained another 20 points on Heger and with only two rounds to go put a nice cushion between the two. 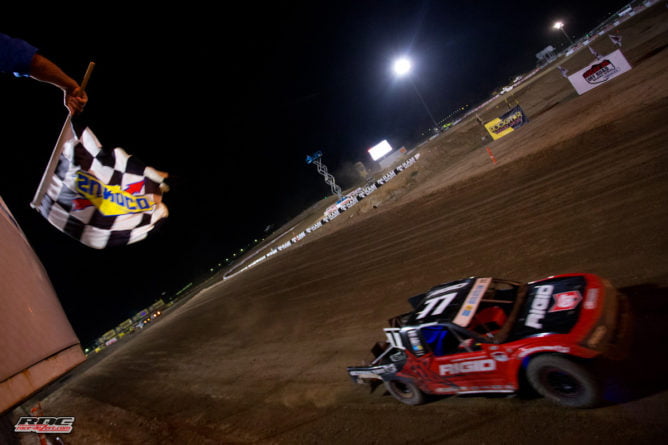 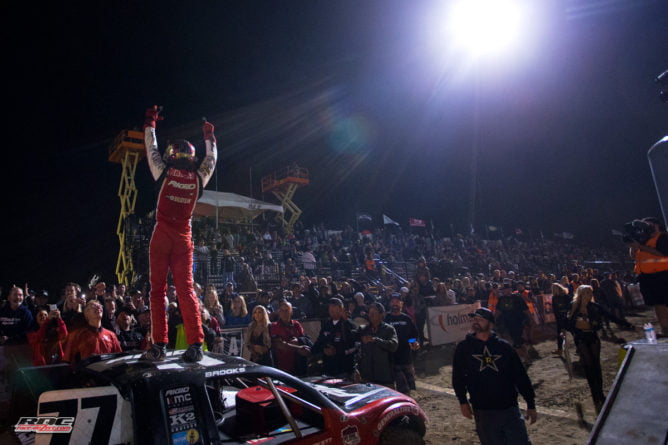 All season long in Pro Buggy the story has been the friendly rivalry between friends Darren Hardesty Jr. and Eliott Watson and their close points race. Hardest’s lead got bigger yesterday after Watson’s car stalled off the start and was never able to get it started, so with Hardesty finishing forth he now has a 21 point lead. 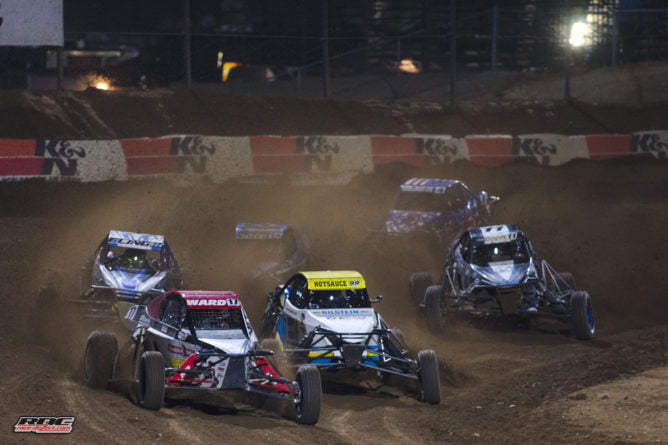 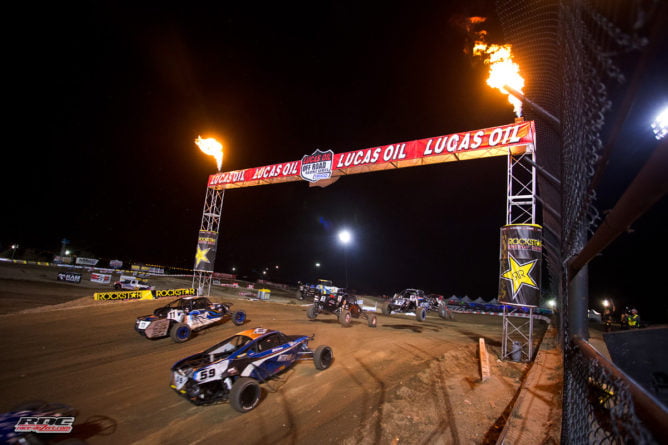 The story of the night however was Bud Ward and the clinic he put on in Pro Buggy. Taking the green flag on the front row Ward took the lead and never looked back, running clean lines and never making a mistake to let anyone get by. While Ward is a relatively newbie to the short course world he is not stranger to offroad racing winning multiple championships in Class 9 and Class 16 out in the desert, and it looks like he’s bringing over some of that success now to short course. 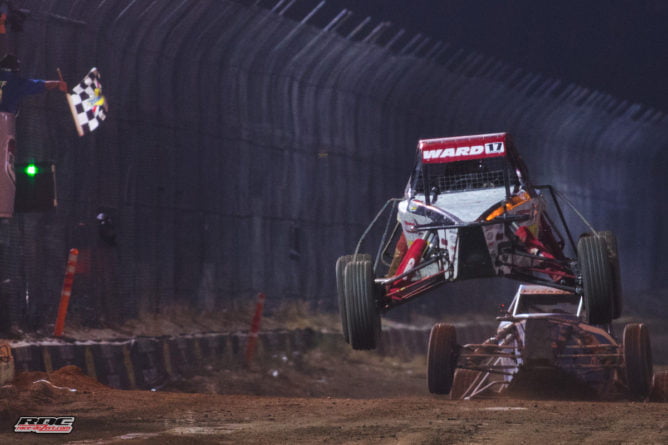 The Pro 2 race was a smash fest with only 4 trucks finishing the race out of 11 that started. Coming off a podium finish earlier in the night in Pro 4 Bradley Morris started off the race in the lead and looked very strong holding off veteran Rob MacCachren for the majority of the race. With track conditions changing quickly on this track Morris made a small mistake overrotatign, and Rob Mac who was right on his bumper had no choice but to follow him which let Jeremy McGrath sneak by and take the lead. 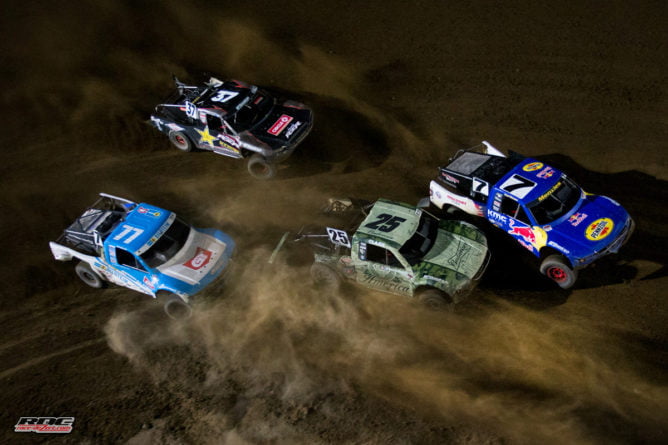 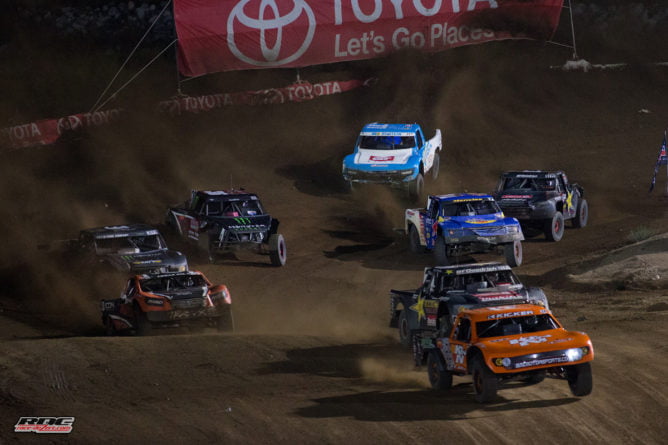 “Usually I’m the one giving away presents on the track but this time it was given to me”, McGrath said on the podium celebrating his fourth win of the season and growing his points lead. The seven time supercross champ knows the feeling of winning a championship but has never won one racing short course. Going in to Glen Helen and Round 11 he had a nice lead over Brian Deegan by 26 points, and with him winning and Deegan finishing 4th he now extending that lead by another 8 points. 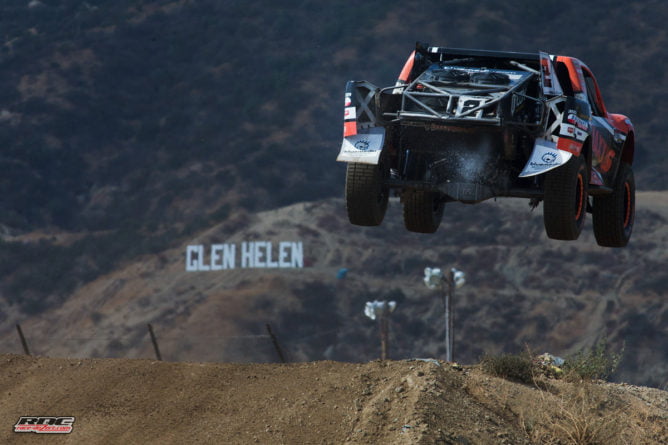 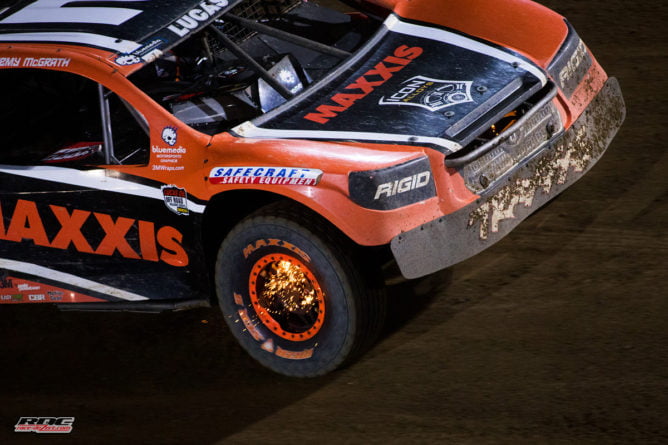 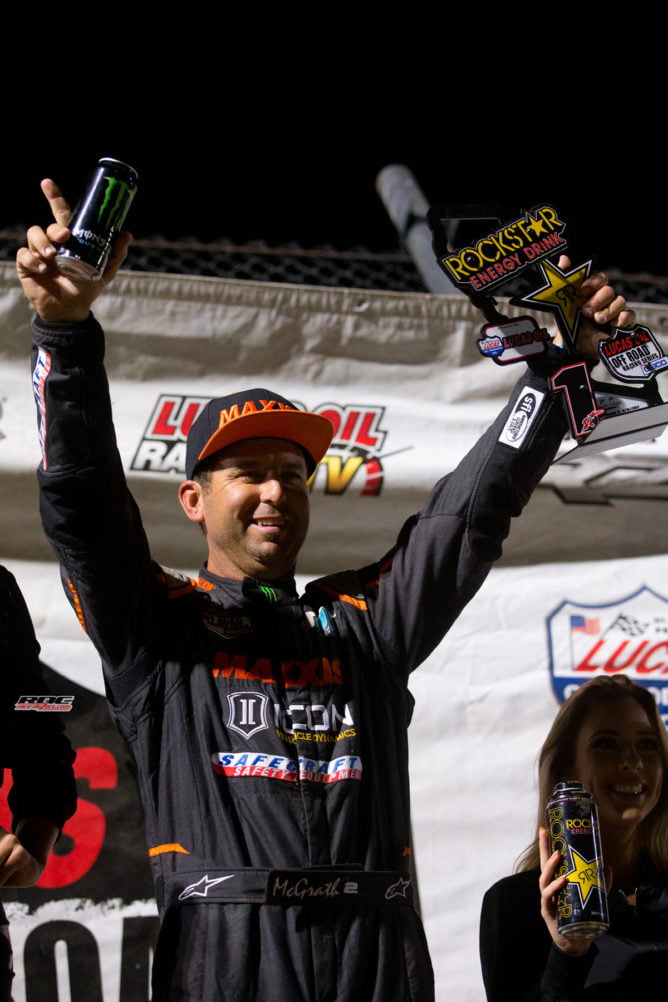