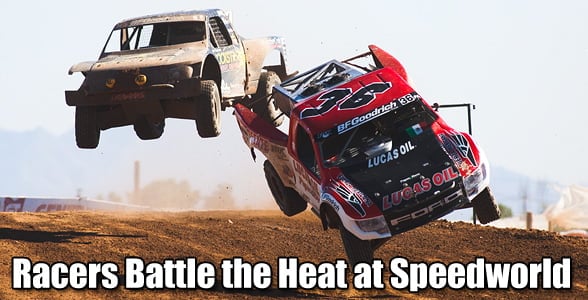 The heat in Arizona never let up this weekend and the same can be said for all the racers. The crowd today was a bit smaller then yesterday but the ones that were there you knew were diehard fans. The racers put on a great show today with some great battling, carnage and excitement.

In the Pro 4 race Todd Leduc took the hole shot leading all the way till after the yellow flag before he bicycled it in turn 2, letting his brother get past him, who he was battling for a few laps before that. Kyle would eventually go on to take the win for the second time this weekend, giving him a good amount of points to try and make a rush for the championship by the end of the year. Honorable mention goes out to Doug Fortin who filling in for Kent Brashco finished fourth in class.

Prolite was once again the Brian Deegan show, as he battled his way to the front after making an impressive pass on Jimmy Stephenson in turn 5 towards the end of the race. Deegan has been on a tear lately and doesn’t show any signs of letting up. Second place went to Corey Sisler, who had some comments on the podium with Rodrigo Ampudia (who got third) about getting hit from behind.

Carnage was the name of the game in the Pro 2 race as after the first lap trucks were missing fiberglass after the start. On lap 4 Robbie Pierce came off the table top before the mogul section a bit sideways putting him off track, and cut back into the course causing him to collide with Myan Spaccarelli damaging both trucks to the point of DNF. Carl Renzender and Jeremy McGrath were also in the pile up, with Carl only making it a few more laps before his damage caused him to pull off. Mcgrath was able to finish the race but had to settle for last place. Rob MacCachren and Rodrigo Ampudia battled in front of the crowd with Ampudia holding off the veteran until mechanical problems caused him to slow down, giving Rob Mac the win. Robert Naughton took second place in front of his home crowd, and Brian Deegan took third place with his fourth podium in four races.