We teamed up with onX Offroad to bring you stories surrounding the culture of the King of Hammers from the lakebed of Johnson Valley. We used the offline maps to navigate around the lakebed and help us mark our locations and waypoints for our projects throughout the week. We present to you: Hammer Stories.

King of Hammers brings thousands of people from all walks of life together for a week-long event of some of the most grueling off-road racing and rock crawling in the southern California desert. It is often referred to as “Burning Man” for off-road. Insane cars and racing mayhem happening all week, from racing to rock bouncing challenges, and even mini bike races, there is no shortage of entertainment. There is one certain thing, race cars aren’t the only interesting out there. Amongst thousands of people and cars, there are a few vehicles that stick out to us, and amongst the seas of incredible and wacky vehicles, we had a chance to learn more about Joey Leers and his LS3 powered Jeep LJ. One of the most beloved Jeeps of all time is a low-volume, stretched version of the TJ generation Jeep. It’s called the Jeep Wrangler Unlimited or referred to as an “LJ”. Because of its longer wheelbase and its suspension, it is often referred to as the holy grail of Jeeps, but Joey’s Jeep is just a step above being a regular LJ, and by step up, I mean giant leap up. What started out as his first-ever Jeep project in high school would turn into a six-year project that would shape his career path as a fabricator and leave him with the ultimate Jeep Wrangler. 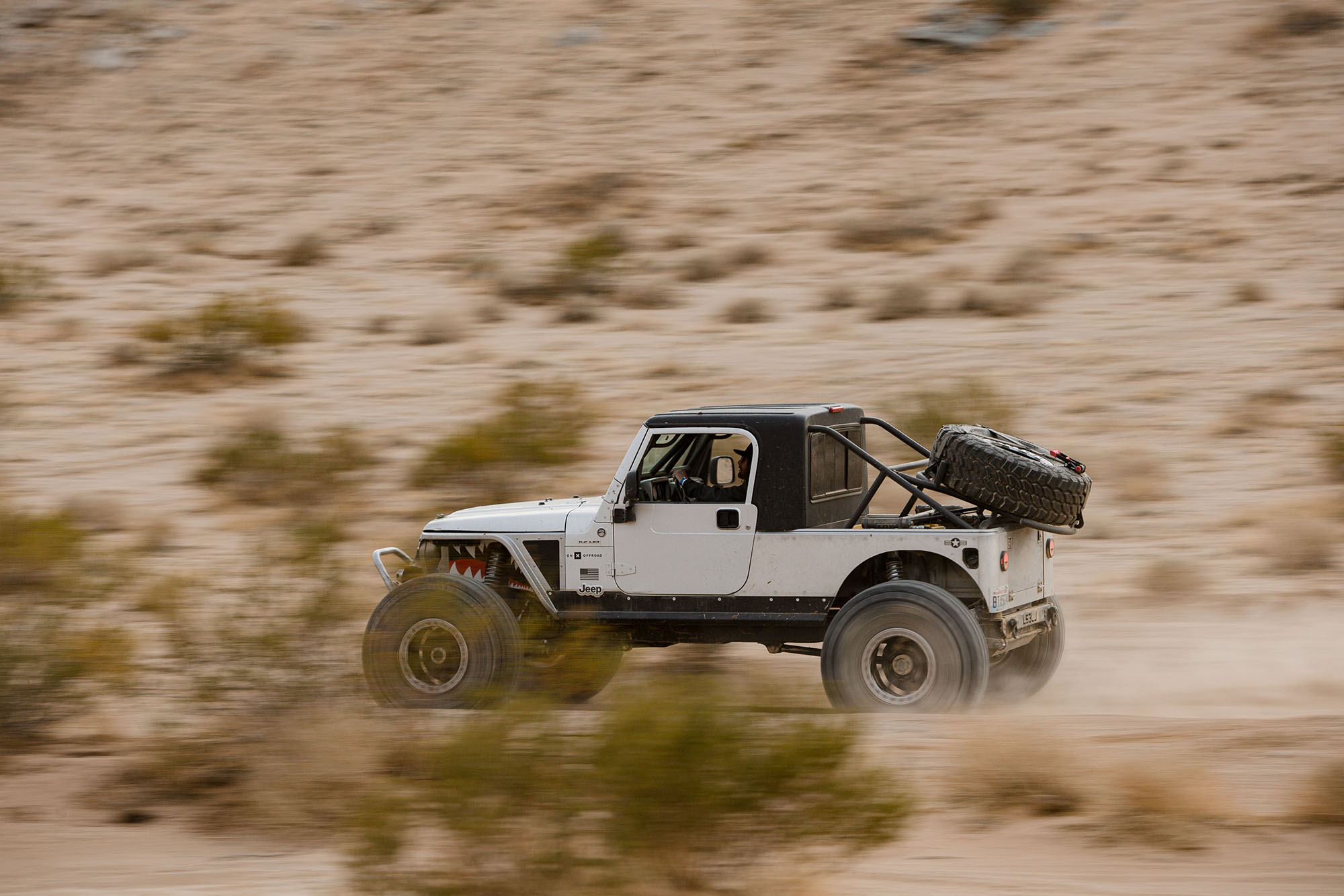 Joey first bought the Jeep his last year in high school and did all the basic modifications you would normally do to it – lift kit, 33-inch tires – the essentials to get outdoors. It wasn’t until he moved to Utah and would spend his weekends in Moab and exploring other parts of the state. But one accident would change his Jeep build’s direction. He would work and learn how to fabricate in his storage unit off his college campus, hiding from security guards over the years to build what was to some a dream Jeep – one-ton axles, sitting on 40-inch tires. But that was only the beginning.

While on a weekend off road trip to Little Sahara Sand Dunes, Joey jumped a Sand Dune, overshot it, and landed nose first; this resulted in ripped engine mounts and a cracked block. Some might go to a junkyard and swap in a 4.0 from another Wrangler, but Joey saw this as an opportunity to really go all-in on the Jeep and put a V8 in it. At the time, Joey had no prior knowledge on how to change the engine and quickly realized he bit off more than he could chew. With the help of a local shop, he was able to get it done, and 10-months later, the engine he had initially purchased had no oil pressure on the first day they tried to start it. Joey was disappointed; he had waited months for this Jeep to be finished, so he sourced a new crate LS3 engine from GM and was going to get it done the best he possibly could.

While that Jeep was getting finished, Joey was working at Terraflex as a fabricator and would hone his skills to take the build to its next phase. The goal was to build it an adventure race Jeep and spend three years getting it to where it is today. Starting with the suspension, he completely ripped everything out and started from scratch. He tossed the old axles and picked up Terraflex 60 full float axles and Fox 2.5 Coil-over shocks tuned from AccuTune. Stretching the wheelbase to 117 inches, set it off for the ultimate wheelbase on a 4-Link suspension in the rear and 3-link upfront, from which he completely designed using engineering software. An Atlas transfer case mated the automatic transmission, and LS3 was proven stout enough for any obstacle you can throw at it. 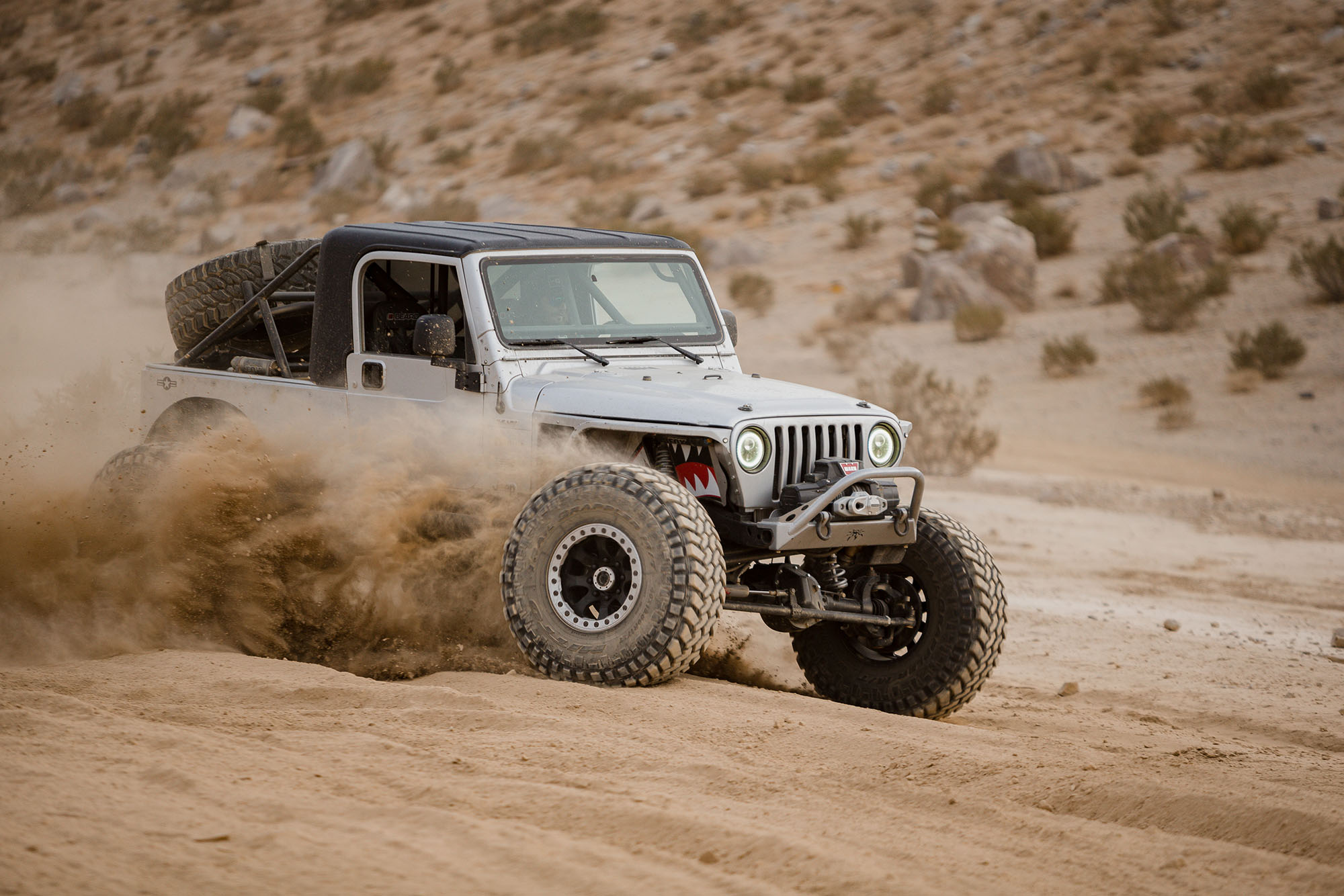 But it wasn’t just strong parts and a fancy engine that make this build so great, and design was a massive consideration for it. Joey sourced a single cab topper for the Jeep and created a removable section for the fastback roll cage to allow for easy topless days. The Jeep sits low having an aggressive stance and is sporting a shark mouth in the fender, paying homage to the WWII Warhawk fighter planes. It even has a secret storage in the aluminum tailgate for his recovery gear. It is details like these that set this Jeep over the top.

What was supposed to be a four-month build after this first engine swap ended up taking him three years, his first shakedown? Non-other than the King of the Hammers, some might say it was the victory lap for it, overcoming all those challenges throughout the years. The building process itself was where he learned to fabricate and design that led him to his current career path as a fabricator at a shop in Salt Lake City. Joey was just in high school when he first purchased the Jeep, and to see it make this transformation is something that many can admire.