NORTH EASTON, MA    MARCH 8, 2011-   Massachusetts conjures up images of clam chowder and Nor’easters, but in the off-road world New England is known for being the home of Lucas Murphy.  Murphy qualified for the exclusive Griffin King of the Hammers race by finishing 5th at the Quadratec Rausch Creek Qualifier, and then backed it up with a win at the Southern Missouri Off Road Ranch International Endurance Race.  Murphy then transitioned back to home life, juggling his work managing a manufacturing engineering group, raising a young family, racing on the weekends and building a new house. 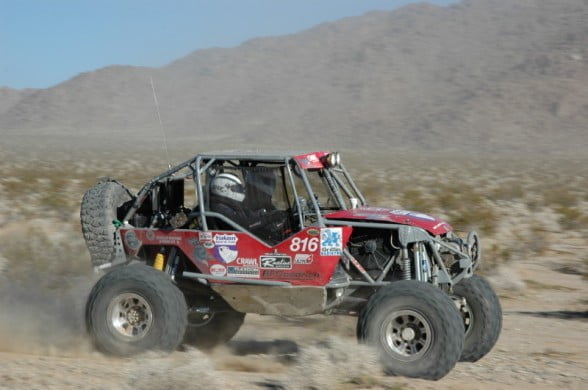 Three days after moving in to his new home, three of the eleven-member Murphy’s Law Motorsports team loaded up and drove 3100 miles across the country to compete in the world’s most difficult one-day off road race.  Murphy’s home fabricated buggy finished 23rd in last year’s King of the Hammers race, but Lucas recognized that there was still room for improvement.  “Fox Racing’s Todd Tenbrook was able to double our speed with just a few hours of tuning!”  Murphy had some great opportunities to pre-run the course, but not without fail on Wednesday when they broke the rear axle!

“Yukon Gear and Axle was able to overnight a rear locker to us in Yucca Valley,” Murphy explained.  “We went through contingency with basically no internal parts in the rear axle, got the parts Thursday afternoon and put it back together Thursday night, went for a quick dark run and pulled up to the start line Friday morning unproven.  Not the way we wanted to start the race to say the least!”

Lucas started 15th in the King of the Hammers and had an excellent first lap in the 120-mile race.  At Backdoor the team almost got rolled on by a competitor attempting the obstacle in front of him, “but I shoved it into reverse and floored it!” Lucas explained.  Murphy’s Law Motorsports was in 11th place on the course when the rear driveshaft failed after contact with a rock on Jackhammer.  A broken driveshaft is easily remedied by someone as mechanically talented as Lucas Murphy, but unfortunately the rogue driveshaft took out the transmission in the process of reversing off the rock.  “There is a reason they call us Murphy’s Law Motorsports!” a goodhearted Lucas stated after the race. 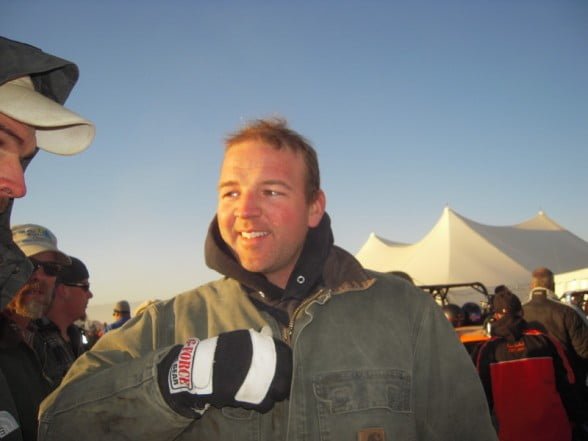 Lucas Murphy at King of the Hammers You Tube Video: http://www.youtube.com/watch?v=m8JWZHQzc98

More Information on King of the Hammers: ultra4racing.com

About Lucas Murphy: Lucas Murphy grew up in Martha’s Vineyard as the youngest of nine children.  At the ripe age of 10, he started working for his father repairing boats and doing salvage work in the family yard of over 100 vehicles.  He started welding at 14, and would complete engine, axle and transmission swaps without hesitation.  He got into 4wheeling as soon as he could legally drive on the beaches of the Vineyard, but didn’t take a true wheeling trip until 2006 after meeting some people online.  In 2008, he built his current rig from scratch and the day he got his rig running was the day before his son Tracy James (TJ) was born.  Murphy’s Law Motorsports was started with wife Trish and co-driver Jon Hastie on board.  They have since competed in the King of the Hammers, RCRocks, Deep Woods Extreme Rock Crawl, Boulder Bash and various off-road trail rides. www.murphyslawmotorsports.com