Off road race teams searching for pennies worth of improvements 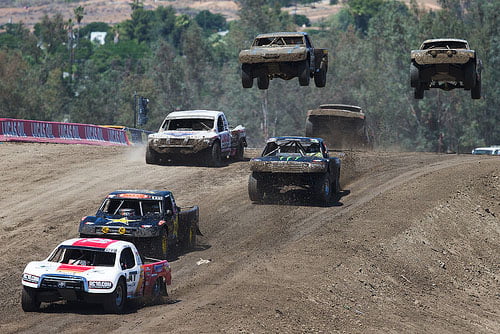 CORONA, California (June 3, 2013) – Jon Nelson said all the dollars have been spent and now everyone is searching for pennies. What he means is that in off road racing, as in most forms of motor sports, finding ways to make the vehicles go faster and handle better has gotten as difficult as finding that needle in a haystack.

“It’s fun to look for, but it’s very difficult (to find) in off road,” said Nelson, the crew chief for Lucas Oil Off Road Racing Series driver and team owner Greg Adler. “On pavement, you’re looking for those little things and you’ll see the results on the track, so it’s easier to quantify them.

“In off road, the track changes minute by minute. So when you’re trying to pick up half a percent or a percent on a track that’s changing 10 to 20 percent it’s really hard to find.”

Nelson started looking for ways to make off road vehicles faster and better in the late 1970s and early 1980s, first with Walker Evans and then with Larry Minor. The search was much simpler then, however, because all that mattered was negotiating the desert terrain in the southwestern United States and Baja California in basically stock trucks and the emphasis was on wheel travel and bigger and bigger tires.

Short course off road was in its infancy then. The late Mickey Thompson first put it in a stadium setting at the Los Angeles Coliseum in the summer of 1979 and it grew steadily throughout the 1980s. Nelson was working for Evans when he built his first short course vehicles, a couple of Mazda pickups, and he said there wasn’t a lot of technology available to guide them.

That changed as the series grew. The production-based trucks slowly were replaced by hand-made, tube-frame chassis and the teams brought in engineers and on-board computers. Nelson was a participant and then an interested observer, having walked away from off road to create the Spec Truck series. A decade later, burned out by working almost non-stop, he sold that series and retired to his hometown of Hemet, California, to play golf and oversee the family’s property management business.

That’s where he was when he got a phone call from Adler, who had competed in the Spec Truck series, and agreed to be a consultant for his short course off road program. Nelson since has become the crew chief and moved the team to the 4,000-square-foot shop on his property in Hemet. In some ways he has gone back to the days before wheel travel, big tires and reinforced components became mandatory for desert racing.

“The Lucas series limits the wheel travel,” the 55-year-old Nelson said. “We’re only allowed so much (18 inches in the front and 20 in the rear on Pro 2 and Pro 4, 12 and 14 in Pro Lite), and we’re only on 35-inch tires, so building a light vehicle is important, trying to get it as light as you can. It’s a lot different animal than the desert.”

“Pro Lite is totally different. They’re very limited on track width (74 inches compared to 93 for Pro 2 and Pro 4). Their track width is pretty darn narrow, so they’re tippy. They don’t have the horsepower to light the rear tires to slide sideways through the bumps, so they’re tough to drive.”

Nelson said he thinks graduates of the Pro Lite class may be better drivers because they’ve learned how to maintain momentum and control their vehicles. But the drivers in all classes have to deal with “the bicycle.”

“Those tracks get all rutted out and they come sliding into the holes. You can slide into the holes at a certain speed and take it, but if you go a little bit too far it’s gonna hook it and go up on the bicycle (2 wheels) and the drivers get all freaked out about that. The problem is, when you slide into those holes if you’re not spinning the real tires it’s gonna hook. It’s really hard for the brain and the foot to cooperate.”

Nelson said in many respects the off road trucks of today aren’t much different than they were 10 or 15 years ago, “but the drivetrain technology has improved and is still improving, coming up with better front discs that offer more traction in the 4-wheel drives. And underdrives (which offer more low gear options). Nobody had an underdrive 15 years ago. Now everybody does so they can get optimum gearing. Guys are experimenting with manual gearboxes, taking the converters out of them so they don’t get a power loss from that and get more power to the ground. The vehicles have improved a little bit, but the big advancement has been in the drivetrain.

“All the big steps are gone. All the dollars have been spent. But they’ll keep coming up with better ways to do it – better, lighter, stronger. But man it’s tough.”

Nelson, who makes changes based more on theory or feel than on driver feedback, said the good news is that “once you get it right it’s good everywhere. There’ll be very, very subtle tweaks you’ll have to make based on how they lay the track out, but typically once you get it dialed it will go anywhere, any track.

“The biggest improvement we could make when we go to the race track is with the driver, and that’s almost always true. Once the truck is basically there you’re working on the driver. What can we do to make our driver faster, because at the end of the day that’s what it’s about. It’s more driver than vehicle.”

ABOUT THE LUCAS OIL OFF ROAD RACING SERIES: