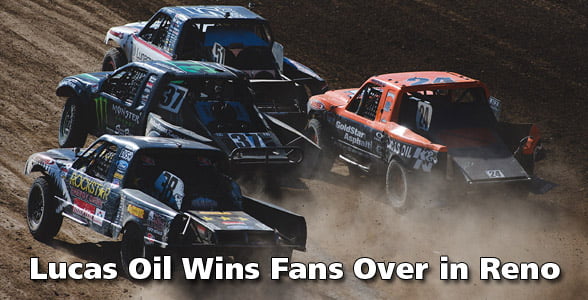 The story of the day at the Wild West Motorsports Park was that of Rob MacCachren’s team. After a bad crash that destroyed the back half of the chasis on his Pro 2, MacCachren’s team didn’t miss a beat and put his spare truck on a trailer in Hemet and made the 8 hour trek to Reno. At 8am this morning the truck was dropped off at the pits, where the team went right to work to swap the engine, transmission, and other parts so that MacCachren could race. Through teamwork they were able to get the truck finished with enough time to get a few hot laps in, but whats more impressive, and what shows that Rob Mac is a true driver, he finished in third place today.

The Pro 2 race had its share of excitement, with Brian Deegan taking the win after having to fight off the lead with multiple restarts towards the end of the race. Eeach time Deegan put some time on Renezder something would happen and cause a yellow flag. One of them was a bad crash by Robert “Fig” Naughton off the big front stretch downhill. After some contact with Jeff Geiser, Naughton put on a show for the crowd tumbling down the hill. Dirtsports magazine much of jinxed Robby Woods calling him the Dale Earnhart of offroad because Woods was black flagged mid race after questionable contact with RJ Anderson (filling in for Patrick Clark). With the win Deegan regained his points lead after Marty Hart suffered mechanical problems and finished far behind.

Ryan Beat gave Hart & Huntington their first win this year with his victory in Prolite. Beat, Deegan, RJ Anderson, and Bradley Morris battled it out for the majority of the race with Beat passing the group with a few laps to go. The win marked his first in Prolite. RJ Anderson grew his points lead even more with a second place finish and Deegan got back on the podium with a third place.

Pro 2 has Marty Hart the baddass, and Pro 4 has Curt Leduc. With a much needed podium finish, Curt Leduc showed everyone that even when reaching his sixties, he isn’t going anywhere. An emotional Leduc was very excited with his strong finish, and when Carl was asked about his 99th win, Curt asked for the mic and joked, “I had 100 race wins before Todd was even born!” With his 99th win Renezder got some much needed confidence after having some bad luck this year in both Pro 2 and Pro 4.

The next stop for the Lucas Oil Offroad Racing Series is to the Sin City in Las Vegas, NV. A night race will help point championships get closer to being decided, and with only three rounds left of racing the action should only get more intense.

Jason Zindroski
Thanks Racedez for the coverage on Sunday, we were there for Friday &amp; Saturday, what a great show. This is great for all off road fans, we can not wait until next year, maybe they will have two events?