History was made today as the biggest purse in offroad history was awarded at the first inaugural Toyo Tires Desert Invitational Presented by Monster Energy. Luke McMillin took home $100,000 cash today after winner the first ever race that was added to an already packed King of the Hammers event. Second place went to Juston Lofton who won $15,000, and Apdaly Lopez received $10,000 for finishing third.

The Desert Invitational was different then your traditional desert race as qualifying was held the same day. Starting order for qualifying was set with a points system that Austin Farner of Fishgistics came up with that ranked all the drivers using three years of data from past races. Some races like the Baja 1000 had more weight to them, and points were given based on finishing percentage and where you finished the race. 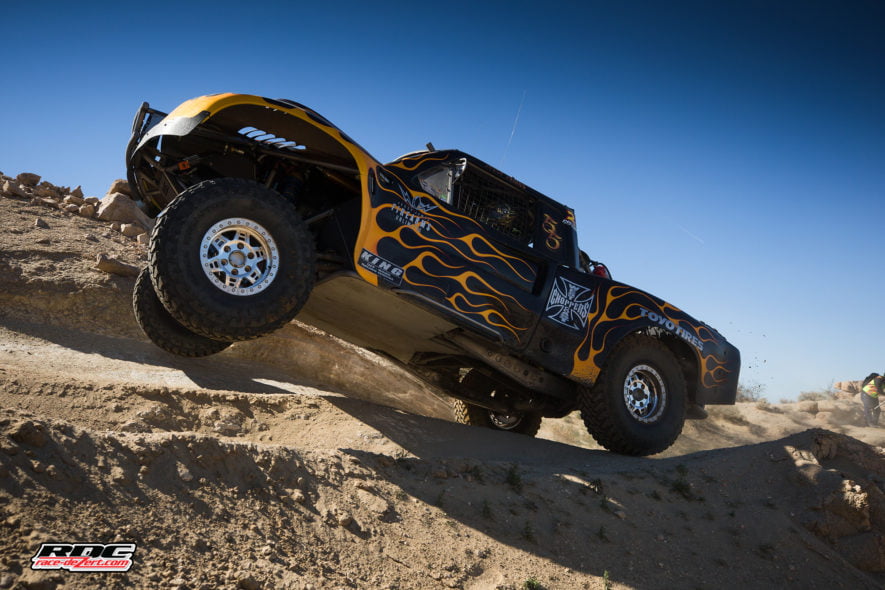 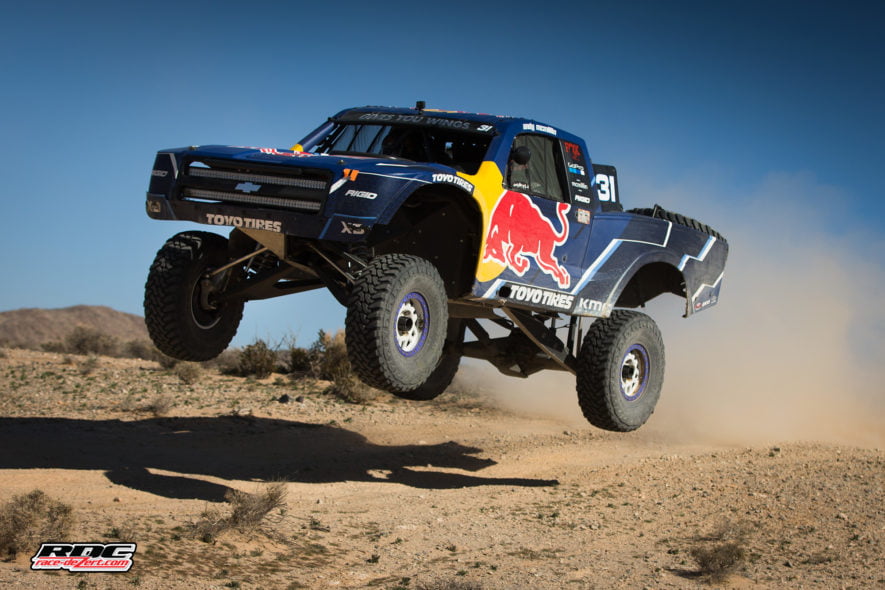 The Prologue was a 20 mile loop, which many of the drivers liked instead of the of the usual 3-5 mile loops they are accustomed to. They felt the longer loop rewarded the better drivers as you had more terrain to deal with and adapt to. Trucks started one at a time with a two minute gap between each one, giving each driver clean air. 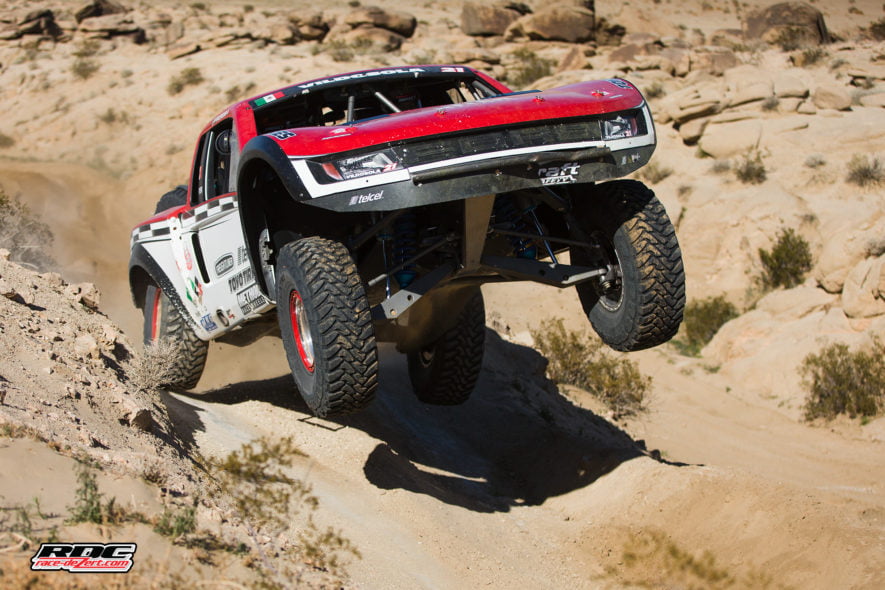 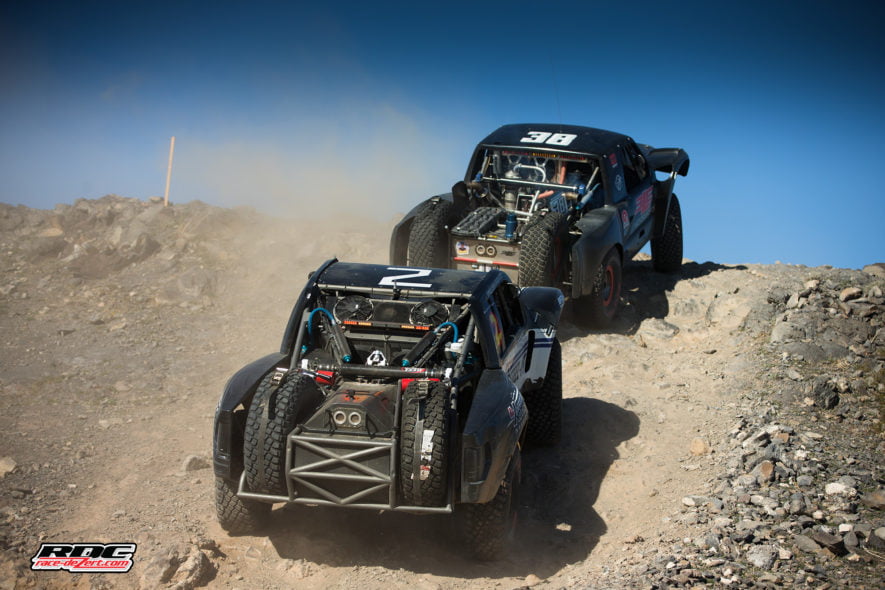 Bryce Menzies would be your top qualifier after pulling in a lap of 15 minutes and 5 seconds, 26 seconds faster then second place Apdaly Lopez. Andy McMillin finished third fastest with a time of 16 minutes and 4 seconds. Josh Daniel and Luke McMillin finished in the top 5 for the prologue. 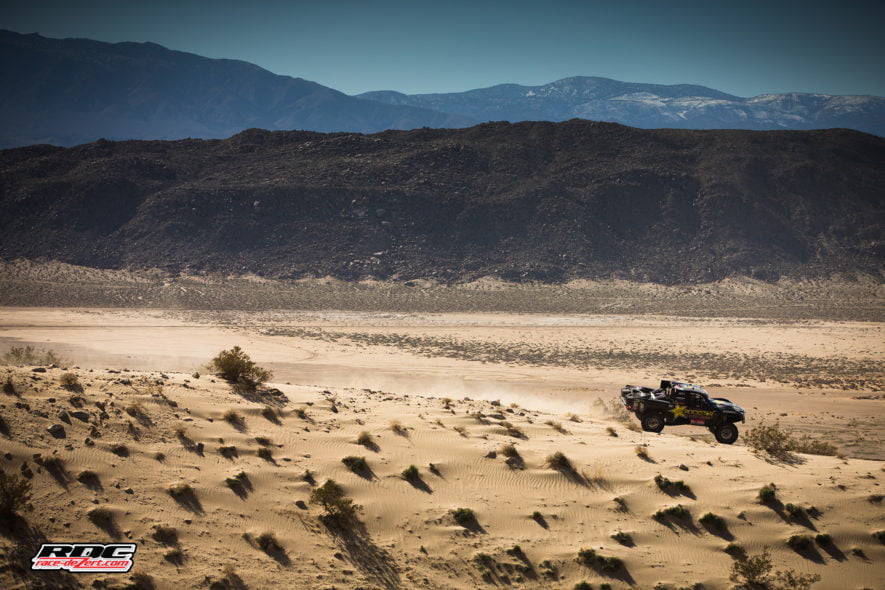 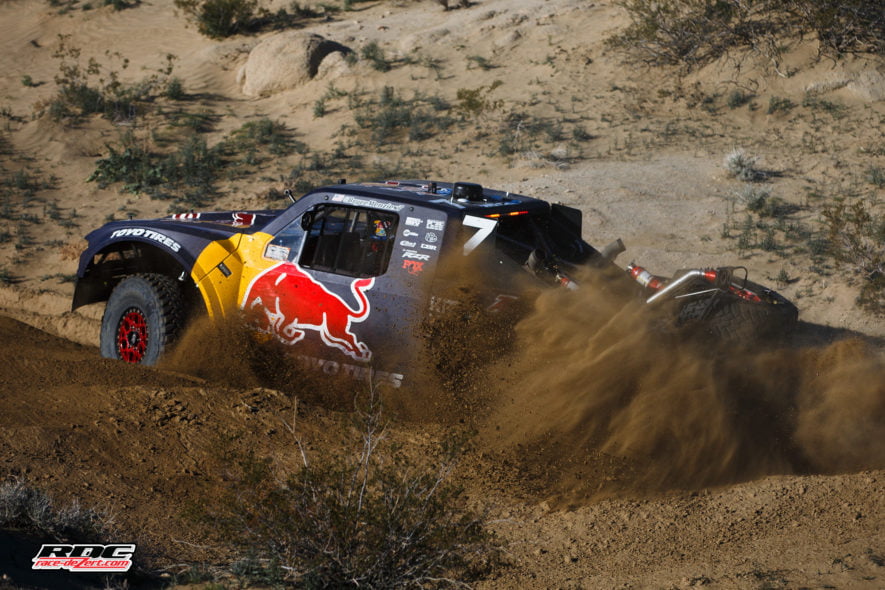 Once the last driver crossed the finish line on their loop the teams were given 15 minutes before the start of the main race. Just enough time to kick the tires and make sure everything was good to go. 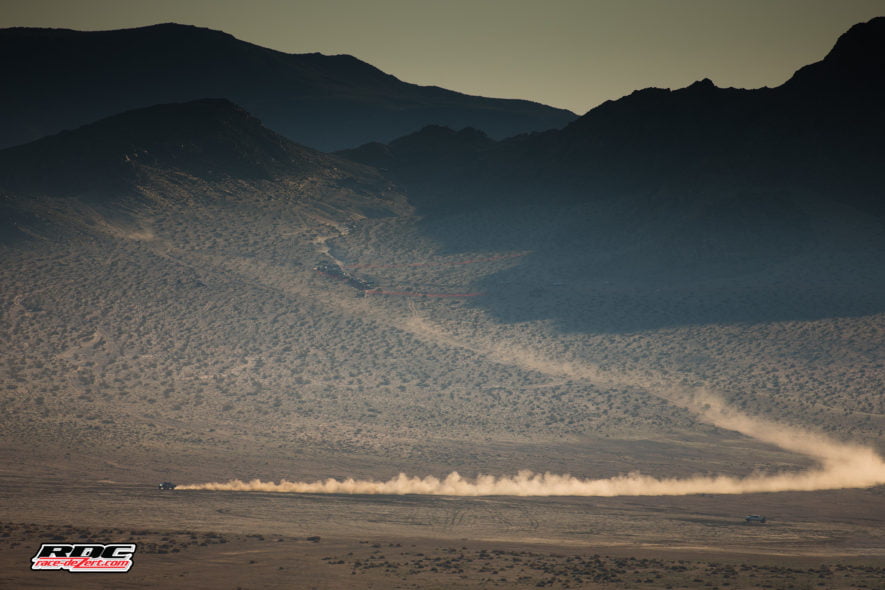 Also different from a traditional race was that the course consisted of two loops, a larger 90 mile loop and a second smaller loop that was around 40 miles. The course would follow a figure eight, Lap 1 you raced the large loop, Lap 2 the smaller loop, and then repeated that for Laps 3 and 4. 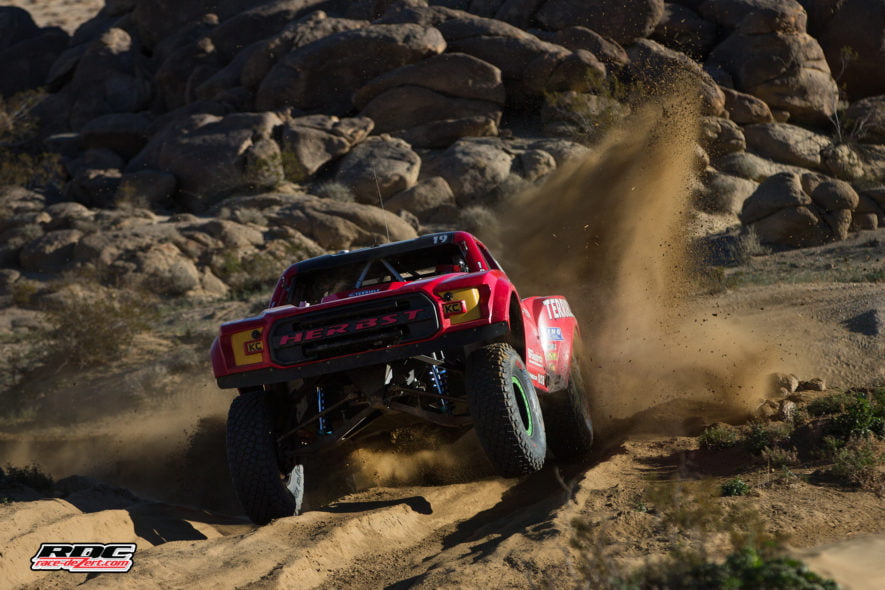 Menzies started off the line with Apdaly and with the AWD pulled the hole shot. Rumor in Hammertown leading up to the race was that Menzies wasn’t planning on stopping at any of the pits for fuel and tires. They have a large gas tank in the truck and with the 4WD would be able to make the tires last longer, but that plan quickly changed as they were forced to come into the pit at remote pit one on their way back in from the large loop. 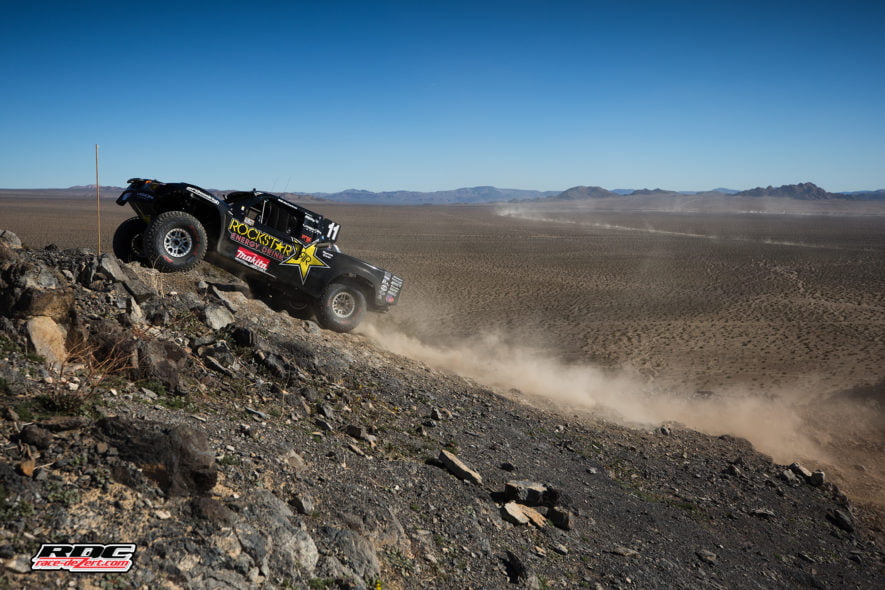 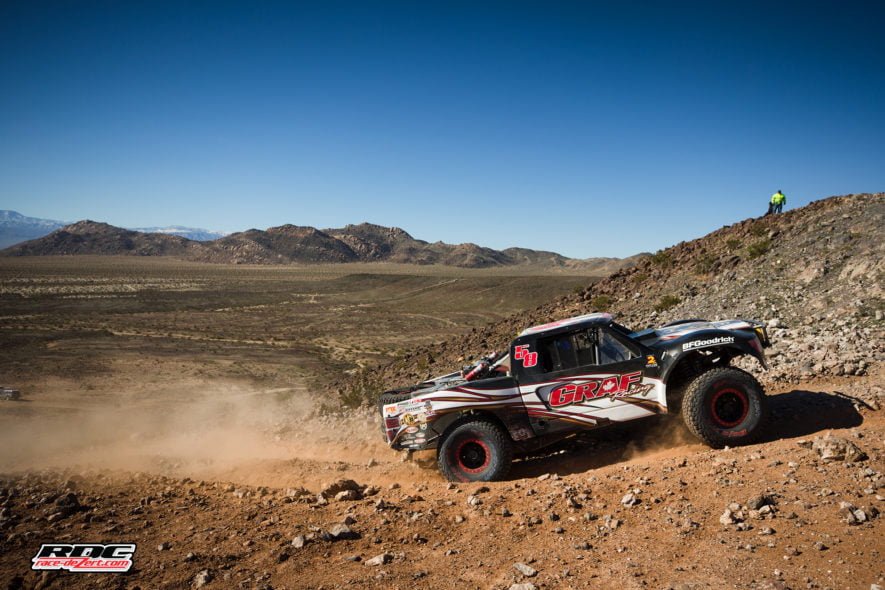 That let Andy McMillin gain the physical lead going out on lap two, but it was Luke McMillin who was leading on corrected time. Also in the hunt after the first lap was Rob MacCachren and Justin Lofton.

23 drivers were entered in the race and only 20 starting after Cole Potts and Raul Gomez DNF’d in qualifying and Justin Matney not starting the main race. After lap one there were already a few attrition demons with Brett Sourapas and Josh Daniels bowing out with mechanical issues. 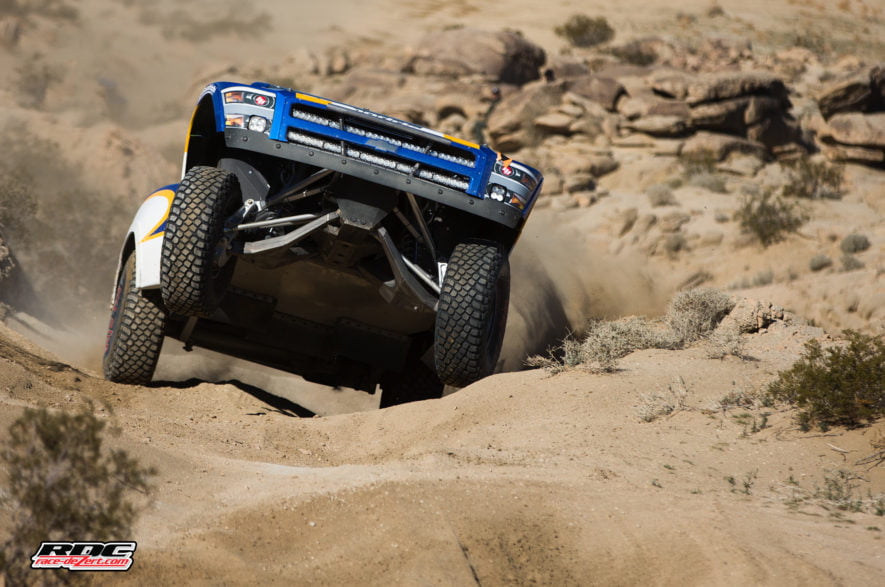 Lap two took out even more drivers as Bryce Menzies had a brake issues, Robby Gordon rolled and DNF’d, Ed Herbst had to pull off, and Tracy Graf had to call it quits as well.

As the race went on more people dropped out including Andy McMillin who lost a ring and pinon going into the technical section of the large loop, which moved Luke McMillin into both the physical lead, and lead on corrected time. Apdaly was second on the road but because he qualified faster then Luke he’d have to pass him back to gain any time on him. 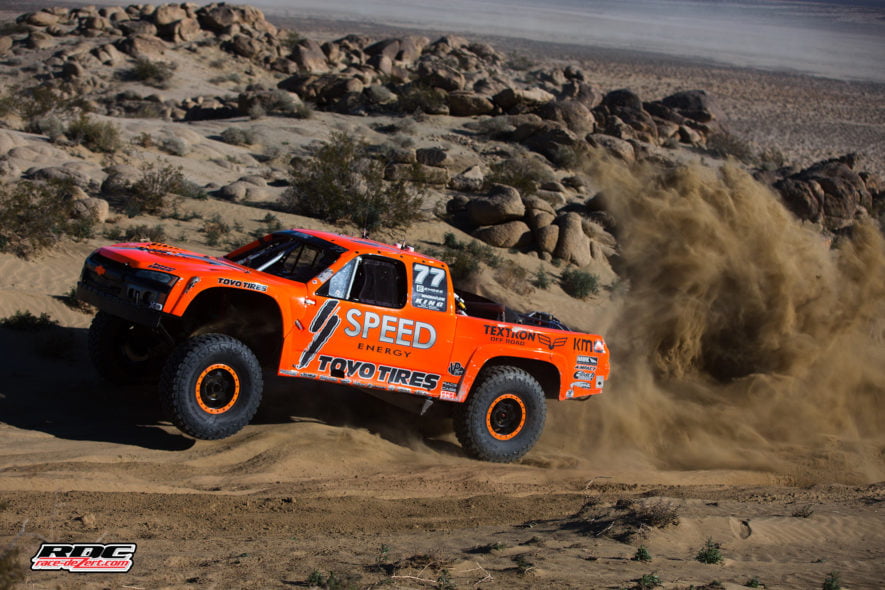 On the fourth and final lap Rob MacCachren was charging hard and close to Luke on time but about 20 miles from the finish suffered a mechanical issue of his own. Justin Lofton wasn’t too far behind Rob so he took over second place.

At the finish line the roar of 900 horsepower echoed throughout Hammertown and it was from the #83 of Luke McMillin crossing the finish line first. Dave Cole, the mastermind behind King of the Hammers and Ultra 4, came up to Luke and told him all times were calculated and trackers checked and he was the official winner. 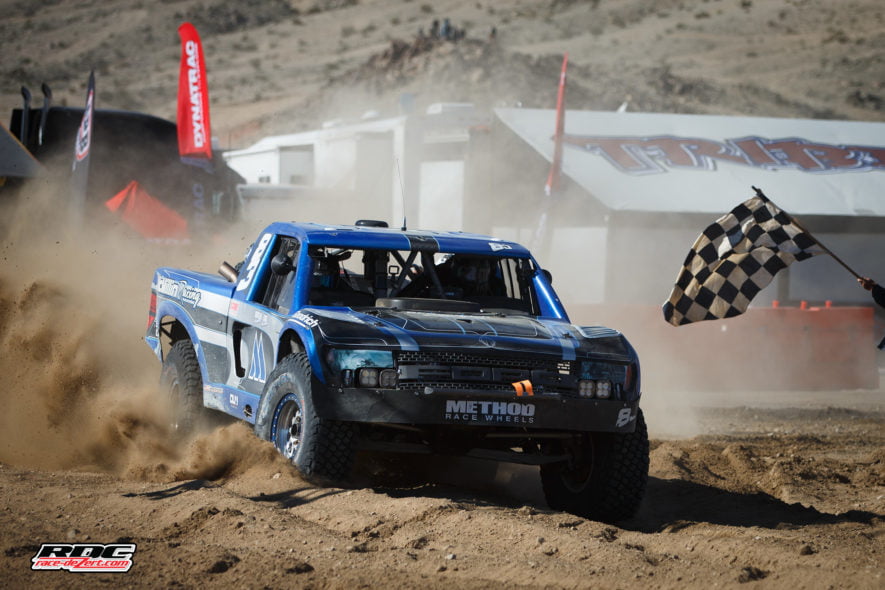 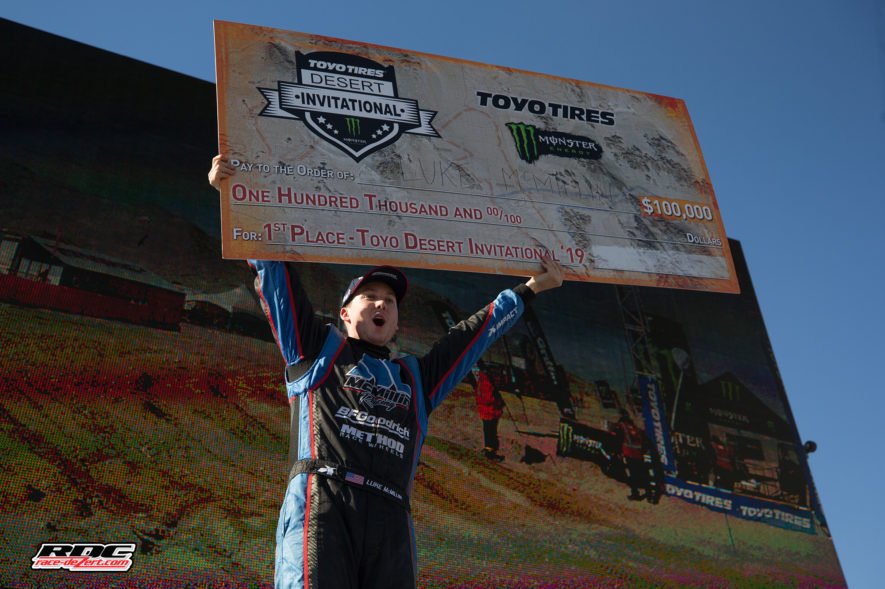 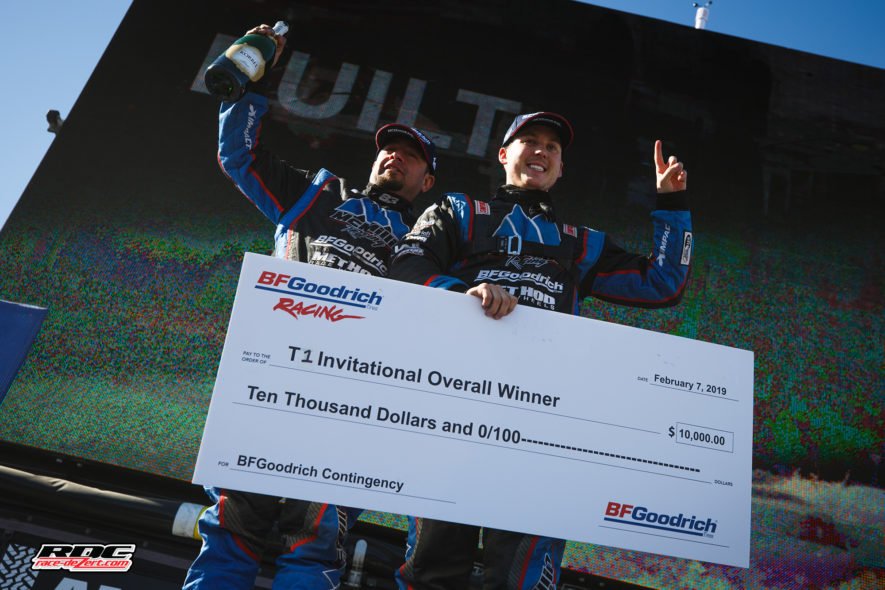 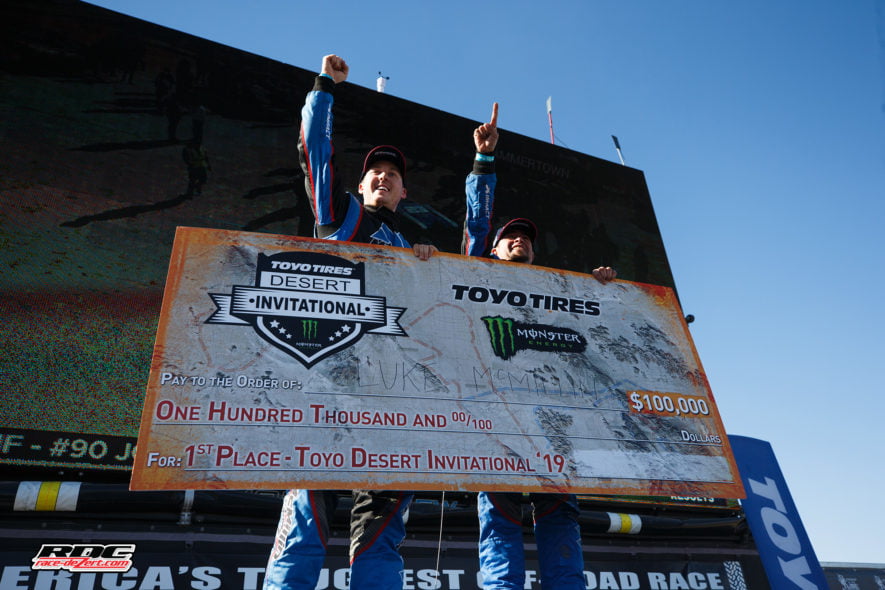 An emotional Luke took the time to thank all this family and crew who have been by his side all his racing career and shared the moment of his first win with them all. It was a well deserved win to a well deserving driver.

On a side note Dan McMillin did NOT get fourth place.