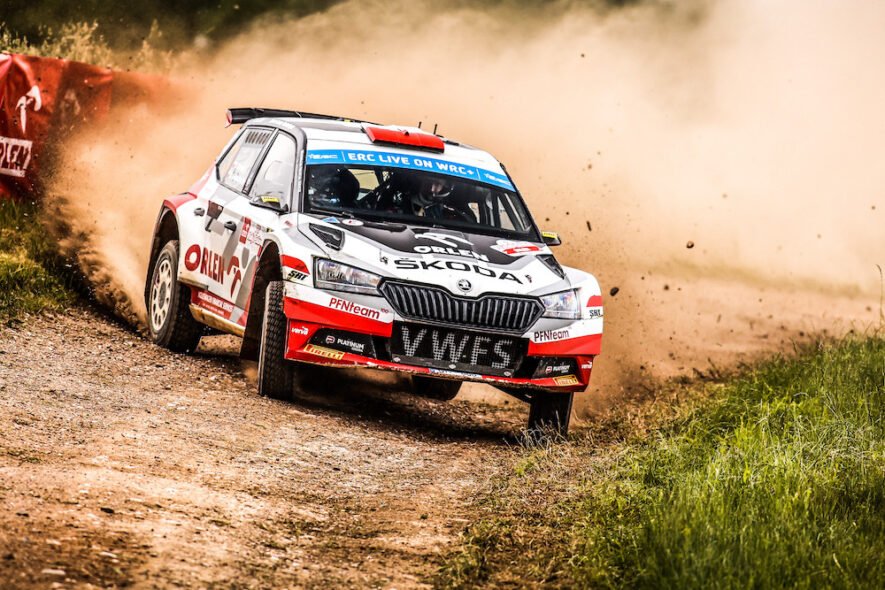 Marczyk finished third overall in last year’s ERC, but has since focused his 2022 efforts on a full campaign in the FIA World Rally Championship’s premier support category, WRC2.

The opportunity to prove himself in front of local fans, however, tempted the Pole and he relished a guest appearance on home soil with his Škoda Fabia Rally2 Evo.

As predicted, Marczyk was immediately on the pace and found himself locked into a tight duel with Nil Solans – the winner of two rallies already this season. Cash-strapped Solans was lucky to even be starting the event having secured a late deal to drive a Hyundai i20 N Rally2 with days to spare.

A scintillating battle unfolded between the pair as they traded blows over Saturday’s superfast stages, with Solans leading the way before coming unstuck on SS7. The steering broke following a heavy compression and the Spaniard became a passenger as his car slid off into a ditch and out of the rally.

Solans’ demise left Marczyk comfortably in front and he carried a 20.4sec advantage into Sunday’s final leg. His task – to manage the gap – appeared to be straightforward, but soon proved otherwise.

Rough second pass conditions were a challenge for all and the leader hit trouble when his Fabia scooped up some gravel on SS12, causing the water temperature to rocket as he nursed his car to the finish in road mode.

Frantic activity ensued at the stop line as the crew removed dust from the grille and, luckily, they were able to continue despite the heart-stopping moment.

Two more nail-biting stages followed as an anxious Marczyk coaxed the Fabia through the ruts. He dropped time to a charging Tom Kristensson over the final tests, but ultimately kept the Swede at bay to record victory by 10.0sec.

“It was not easy,” admitted Marczyk. “Yesterday was a really good day from our side – we were fast and we had luck too. It’s a shame that Nil did not finish the day, but it was all part of the fast pace.

“Today was tough. The start was okay, but Tom was moving closer to us. I felt good in the Mikolajki MAX stage and decided to push the car to build a gap, but one kilometre before the finish line we got some gravel in the radiator. We were lucky – a kilometre more and we would probably not have had an engine because the temperature was up to 140 degrees!

“We are here as the winners of Rally Poland. It’s unbelievable and this shows me that my path of development and doing everything step by step is working. After some years, we are fast and reliable, and here we are on the finishing line.”

Kristensson was thrilled to finish as runner-up in his KOWAX Racing Hyundai i20 R5. The Swede started Sunday under pressure from the chasing crews, but chalked up two stage wins during the last leg to leave them for dust.

Ken Torn completed the podium another 8.1sec in arrears. The Estonian driver banished all memories of his rocky season start by posting some hugely impressive stage times aboard his Ford Fiesta Rally2, ending the rally 16.6sec in front of Efrén Llarena.

Llarena – driving another Škoda for Team MRF Tyres – was very much a podium challenger until two faulty spark plugs hampered his progress on Sunday morning. It wasn’t all doom and gloom for the Spaniard, though, as Solans’ non-score allowed him to stretch his championship lead to 24 points with four rounds to go.

The rest of the leaderboard was made up entirely of Škoda cars, with Simone Tempestini completing the top five. The 27-year-old once again proved his strong gravel pace with a string of top three stage times and trailed Llarena by a tiny 1.2sec despite a rear puncture on SS13.

Home hero Grzegorz Gzryb was more than a minute behind and scrapped with compatriot Adrian Chwietczuk right until the Power Stage, when Chwietczuk punctured and dropped to 12th. Filip Mareš, starting his first gravel rally in three years, swooped into seventh and was only 2.3sec behind.

Alberto Battistolli, Javier Pardo and Norbert Herczig rounded off the leaderboard. Pardo carried a 50sec time penalty because of an engine fault which delayed him before SS7, while Herczig was penalised by one-minute for an early check-in.

Robert Virves delivered one of the weekend’s star performances to finish 13th overall as well as winning ERC3 by over five minutes from fellow Ford Fiesta Rally3 driver Kaspar Kasari.

The ERC season plunges into its second half with a visit to Latvia for round five next month. Rally Liepāja is set to serve up more thrilling action and takes place on 2 – 3 July.

Championship standings (after round 4 of 8):