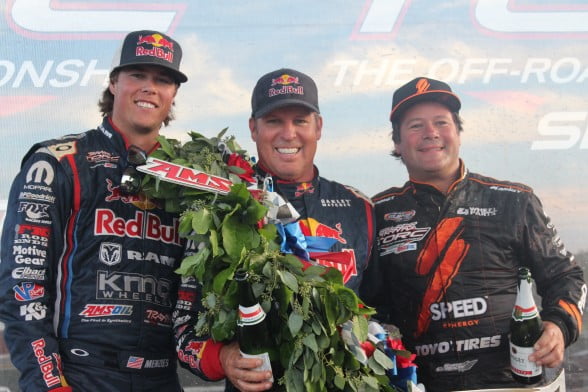 The sun was shining and the stars were out at Crandon International Raceway this Labor Day weekend in Crandon, WI for TORC rounds 11 & 12. The great weather led to some awesome racing! Ricky Johnson capped off an already remarkable weekend for Menzies Motorsports by capturing his first the Amsoil Cup! The Amsoil Cup race is one of the only times that both PRO 2 and PRO 4 classes race against each other at the same time. The PRO 2 class took off 12.5 seconds before the PRO 4’s; with Menzies taking the holeshot and capturing the early lead.

Menzies battled with fellow PRO 2 driver Robby Gordon for the first 4 laps of the race and gained a significant lead on the field until fellow Redbull/Menzies Motorsports driver Rick Johnson came into the picture. “My spotter told me that RJ is coming and he was about 12 seconds back with just 4 laps left, 8 seconds with 3 laps and was on my door with 2 left” said Menzies with a laugh. Both Menzies and Johnson were turning record breaking lap times but Rick just had it going on with his BFGoodrich tires hooking up on his 4×4 to give him added traction through each corner. Johnson would work his way to the front and end up passing teammate Bryce Menzies with just 2 laps remaining and never look back. Both Menzies Motorsports drivers made the podium with Bryce taking 2nd. This was a great finish to an already spectacular weekend for these two!

Bryce took first place on Saturday in the PRO 2 class with a spectacular race where he checked out from the field. Sunday was not as friendly to Bryce as he spun out and worked his way back to fifth place. Menzies took the points lead for a short time on Saturday and currently sits a mere 4 points behind Rob MacCachren for the lead heading into TORC Series Championship Antelope Valley, CA for the final stop of the season. Heading back to the same track where Menzies received his first shortcourse victory Things are sure to heat up in the PRO 2 class with only one race remaining that will be worth double points.

Rick Johnson had some mechanical issues that forced him to pull off the track after leading the first 3 laps on Saturday. The team worked hard to get the kinks worked out and Johnson came back Sunday with his 7th victory of the season. Johnson has a significant points lead on the rest of the PRO 4 class with one race remaining. If Johnson finishes the race in the top 6 he will seal his back-to-back championships! Antelope Valley is going to be jam packed with great racing for the last race of the year. Stay tuned to find out if both Redbull/Menzies Motorsports drivers can repeat their championship performances from a season ago!