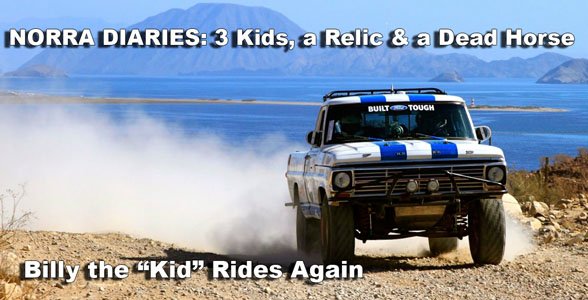 It had all the makings of a once in a lifetime adventure rally: Speed, endurance, family, friends, mystery and, of course, the immeasurable beauty and intrigue of the mighty “BAJA”. For longtime buddies Lance Kane and Billy “The Kid” Boyer, the plan seemed easy enough. It simply meant getting Bill’s 1969 FORD F-100 ready for 4 days and over 1200 miles of special stages and transfer connections on the General Tire NORRA Mexican 1000 Rally. The only problem was they needed a sponsor/ partner and things started to look bleak for this rally, which ironically, would conclude on May 2nd, “Billy the Kid’s” 54th birthday.

So with less than 2 months prior to the first green flag, Boyer and Kane’s Mexican 1000 was on the rocks. This was big bummer for these two BAJA vets since it wasn’t so much an issue of whether they could “handle” anything the BAJA could throw their way.

Boyer has been attacking BAJA for over 3 decades, won multiple motorcycle championships, cherishing his most important BAJA accolade of all: the 2009 BAJA 500 overall championship. Boyer, who just celebrated his 30th anniversary working for American Honda, has motorcycle racing roots dating back nearly fifty years, as evidenced by his many photos and trophies lining is Lomita CA shop. 5 minutes with “The Kid” and anyone will see a 14 year old “gear grommet” stuck in a body 40 years older. Boyer, eludes an enthusiastic confidence about building machines and an equal proficiency at racing them. The man is totally addicted to off-road.

Lance Kane is no slouch either, by any means. Not only did Kane solo the 2010 BAJA 1000 to La Paz on a HONDA 450x for the kids of Santa Marta Orphanage in San Vicente, he did so 100% on his own dime while consequently raising over $7,000.00 specifically to purchase a rare, but well needed piece of medical equipment solely for the purpose of providing therapy to the autistic kids of Santa Marta.

Kane is also highly renowned for co-founding “Racers and Ranchers” a Baja specific charity designed to preserve BAJA’s off road legacy. R&R raises funds and awareness specifically for helping land-owners and off-roaders co-exist while ensuring longevity for the sport in BAJA North and South, which is those states’ number 1 pastime.

Both Kane and “The Kid” also race for Clyde Stacy under the RPM Speed Energy tent. Lance has been racing with Clyde Stacy’s RPM project since 2007 and has recently brought the kid into the mix. Stacy is currently one of Baja racing’s top benefactors and team owners, fielding handfuls of vehicles in various programs.

Despite these worthy credentials and pedigrees, Boyer and Kane were S.O.L. and up creek. Their entire Mexican 1000 hopes were dashed and Boyer’s 54th would be dud.

Enter longtime bro and equally exuberant Jim Buerge whose family owns and operates Buerge FORD, one of the oldest continuously active FORD franchises in the country which will have its 100th birthday in only 3 years. Buerge is no stranger to off-road; his father and he started on 3-wheeled ATC’s then graduated to buggies and ultimately racing class 1 cars, but not so much in BAJA.

Thus Lance and “The Kid” recruited Buerge with the promise of intrigue and adventure, those attributes which only the infamous BAJA can seem to offer. And the whole thing made sense to Buerge, who is no less of a grown up “kid” than Billy himself. Buerge saw the connection between his family’s franchise history and the legacy the Mike Pearlman’s NORRA Mexican 1000, the first ever “off road” race in the world.

Now that Jim Buerge and the Buerge FORD franchise were behind Kane and Boyer’s program, the F-100 was almost ready to tackle the 4 days of the General Tire NORRA Mexican 1000 Rally. The team would enter the FORD in the VH class: Open Truck/SUV w/Rear Leaf Springs.

Getting down to the gist of the Kane/Boyer/Buerge mission was the F-Word, which if you haven’t heard yet, means FUN and is the overall credo of Pearlman’s NORRA race, also dubbed “the happiest race on earth.”

It was a big deal for everyone involved that the “kids” all let their families in on the action; Boyer’s wife Diana drove on Day 1 and daughter Amanda took the wheel for over 100 miles to San Juanico and got interviewed on Mexican TV. Kane’s dad Mike also drove a few transfer sections. Best of all Boyer got to pilot the Buerge F-100 into San Jose Del Cabo with best bro Lance Kane to his right for an epic finish for the whole team. 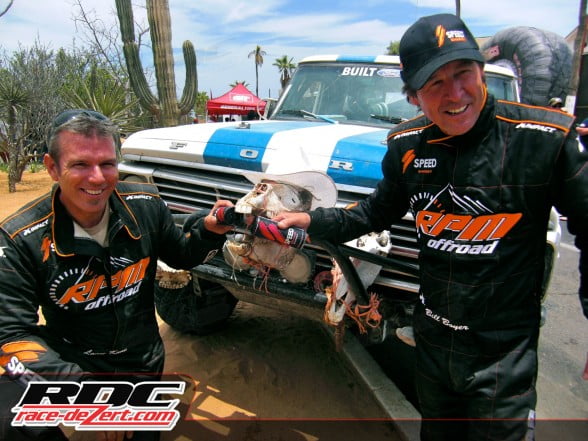 RDC wanted to track the Buerge FORD F-100 of Kane and Boyer (as well as others) on board the RDC/C&D media bike, but found that task to physically dangerous and demanding considering the dust and speed. But low and behold, the RDC team found Kane, Boyer, Buerge and their families high-fiving each other for the “Kid’s” birthday at the GT NORRA M1K Awards Ceremony on the beachfront of the luxurious Cabo Azul hotel, where race organizers and sponsors hosted the biggest and best ever awards ceremony of any BAJA race in history. This fiesta was top notch with free-flowing drinks, 4 star buffet on the beach and hands down the biggest and best fireworks finale we have ever seen.

It just goes to show what the spirit of “The BAJA” can do when the chips are down. Just like in Mexico’s frontier as it is in the suburbs of LA, when the going gets tough, the tough get going. Nobody exemplifies this principal more than Kane, Boyer and Buerge as these three “kids” in grown-up clothing.