Monster Energy Honda Team, all set for a historic edition of the Silk Way Rally – race-deZert.com 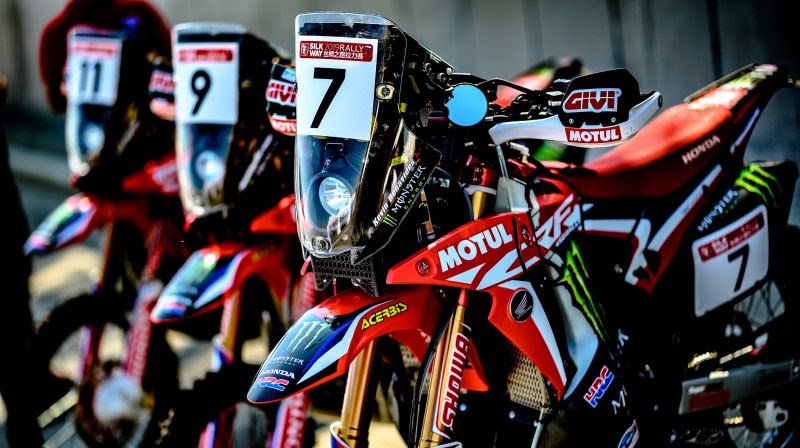 Ready to roll in Irkutsk where the 2019 Silk Way Rally is about to get underway. The tenth edition of the rally will feature – for the first time – the motorcycle category, with Monster Energy Honda among the hot favourites.

The second round of the 2019 FIM Cross-Country Rallies World Championship calendar kicks off tomorrow with the opening stage of the Silk Way Rally to be held in Russia. Today, in Irkutsk, Monster Energy Honda Team made it through the administrative and technical shakedown prior to the race start. Elsewhere in the great city of the Siberian region, the same afternoon, the event’s celebratory starting ramp was held, before competitors head off on the 5000-kilometre odyssey which separates Irkutsk from Dunhuang in China, where the rally will conclude some ten stages later.

Monster Energy Honda Team line up for the Silk Way Rally with three of their four factory riders, with the trio scheduled to compete in every round of the world championship: Kevin Benavides (Argentina), Joan Barreda (Spain) and José Ignaci Cornejo (Chile). American rider Ricky Brabec continues his preparation for the forthcoming Dakar in the United States.

The squad’s sporting manager, Rubén Faria, believes the Silk Way Rally is “a great but tough race that is complicated to predict. The team is all set to go and is looking forward to getting the action underway. Until now, everything has gone according to plan. The riders like the bike set-up very much as well as the terrain conditions of the first days. We got through the scrutineering without complications and the riders can’t wait to begin. We are confident that there won’t be too many complications in the opening days, given that we won’t be taking any risks at the start as we believe that we should arrive in China and be in the running for the victory. There will be a lot of navigation on the way and it looks set to be a tough one.”

The first stage of the Silk Way Rally, between Irkutsk and Baykalsk, will cover a total of 255.53 kilometres which will include just 50.87 km of timed special, mainly over the hard terrain of the Siberian taiga on a route that will take in forests and river crossings, before the riders make it back to base camp on the shores of Lake Baikal, the deepest lake in the world.