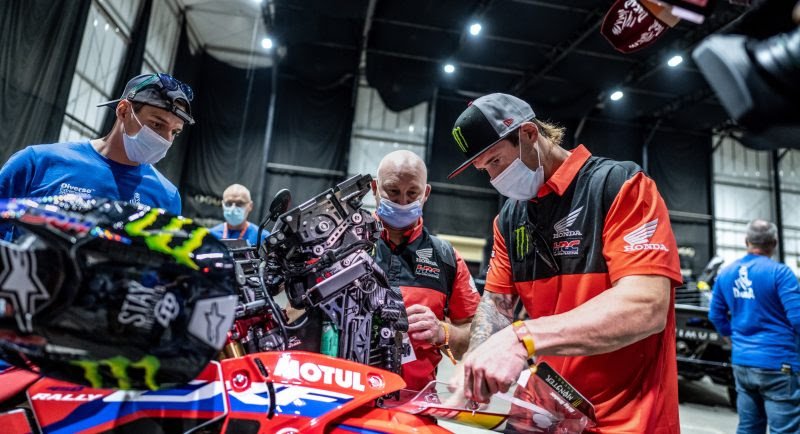 Monster Energy Honda Team are all set to compete in the 44th edition of the Dakar Rally. All the riders and bikes cruised successfully through today’s scrutineering and yesterday’ shakedown leaving the four riders confident of their prospects for the rally which gets underway on 1st January.

A blast from the past: in 2013 Honda returned to the world’s Motorsport toughest competition, the Dakar Rally, intent on once again dominating the race as they had previously done in the 80s. After a 23-year absence, the first years back proved troublesome, but never despairing – as Winston Churchill put it – the team learned from their failures, eventually going on to achieve success.

It did not take long for the stage wins to begin to materialise in the new Honda era, with the team soon vying for top positions, before the triumphs finally arrived. In 2020, Ricky Brabec would become the first ever American to win the Dakar, ensuring Honda’s name was once again inscribed on the winners’ list. A major triumph after eight determined seasons doggedly pursuing the goal.

“Getting to the top is difficult, but staying there is even more difficult”. Monster Energy Honda Team went into the 2021 Dakar – marked by the Covid-19 global pandemic – firmly set on improvement. And the team were to pull off the feat yet again, improving on the previous year’s results with a one-two that Honda had not achieved since that of Cyril Neveu and Edi Orioli in 1987 on the shores of Lac Rose in Senegal. This time the win went to Kevin Benavides, with Ricky Brabec claiming the runner-up spot. The Honda CRF450 RALLY riders had put their talents on display and had been consistently among the top finishers throughout the rally.

Undoubtedly, the team’s intention for this 2022 Dakar Rally edition is to achieve a hat-trick of triumphs in this, the most arduous era of the Dakar; one featuring greater competition than ever before. With this objective in mind, the team line up the following squad: Joan Barreda, Ricky Brabec, José Ignacio Cornejo and Pablo Quintanilla.

After the Dakar 2021, the team has shown very good performance in all the races in which it has participated. In addition, the last rider to join the Monster Energy Honda Team, Pablo Quintanilla, stood out by winning the Rallye du Maroc.

Saudi Arabia will be hosting this 44th edition of the Dakar Rally which gets underway on 1st January from Ha’il and is due to finish in Jeddah after covering over 8,000 kilometres of the largest country in the Middle East. The Monster Energy Honda Team – with former rider Ruben Faria as General Manager – is made up of a total of 26 members from six different countries.

Starting in Jeddah and finishing in Ha’il, the first day of racing will feature a short 19-kilometre timed special stage, taking place between two very lengthy liaison sections for a total stage of 834 kilometres. The special stage will take place over dirt tracks featuring the occasional small dune, which will give the riders a reminder of their skills in the sand. Finishing positions for the special stage will be important, as they will allow the top finishers to be able to choose their starting positions for the following stage.