Shingle Springs, CA (April 14, 2011) – After a first place overall podium finish and winning the UTV1000 class at Round 1 of the Valley Off-Road Racing Association (VORRA) series, Jon Crowley seeks to DOMINATE Round 2 in his Monster Energy Kawasaki Teryx 4×4 UTV. 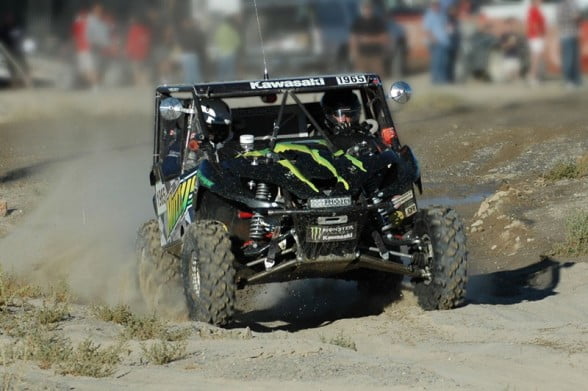 The 2011 season is shaping to be a great season, as Jon holds the early points lead going into this weekend’s second short course race of the year at Prairie City OHV Park. The 7-round series consists of 4 short course races and 3 desert races including the only 24-Hour Endurance race for UTV’s.

When asked about the 2011 VORRA season he commented, “This season will be tough and rugged. With a combination of short course and desert races, my Monster Energy Kawasaki Teryx will be on its game, and the rest falls into my hands at the wheel.”

Jon Crowley is proving that his Monster Energy Kawasaki Teryx is possibly the most versatile UTV in the circuit. His 999cc equipped MONSTER features a +4″ Funco Suspension set-up accompanied by Fox Racing Shox 2.0 DSC’s, which allows him to run and WIN in the same vehicle throughout the year.

Jon explained, “Where others have dedicated vehicles for short course or desert, we’ve found the right combination to be BETTER and FASTER in the same vehicle all year long. The Funco suspension is truly an all-around system that only requires some fine adjustments on the Fox Racing Shox. Muzzy’s Performance power is pushing me to the front, and no matter how much power I throw at them, the Pit Bull Tires keep on grabbing!”

This weekend’s race at Prairie City OHV Park, just outside of Sacramento, will be challenging, but the Crowley Off-Road Racing team knows that the Monster Energy Kawasaki Teryx will be tough to beat. Follow and stay tuned to www.CrowleyOffRoad.com for the latest results, photos, and videos.

About VORRA: Valley Off Road Racing Association (VORRA) was established in 1975 as a family-oriented organization and is led by current promoter Wes Harbor who believes that “off road racing has its roots in people’s garages”. VORRA is the only organization to offer both four short course races and three desert races as part of its overall season championship. Each race draws over 60 racers between multiple classes available for Cars, Trucks, Pilots, ATV, UTV and Trophy Karts. In 2010 VORRA has added two additional truck classes and a stand alone ATV Race Series. More information can be found at www.vorra.net