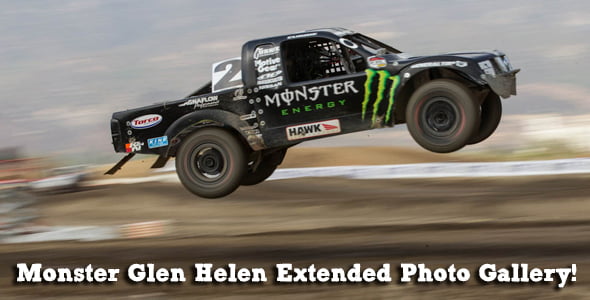 The Monster Energy Off-Road Team headed to Glen Helen Raceway for Rounds 9 & 10 of the Lucas Oil Off-Road Racing Series holding nothing back and standing their ground.

Pro 4 Unlimited racing action had points leader Kyle LeDuc beside himself after a mechanical failure in Round 9, but in true LeDuc fashion, he came to Round 10 for redemption.  LeDuc did just that and was able to claw his way to the top and finish within mere seconds of the first place podium.  LeDuc looks to continue to strengthen his points lead and capitalize on every misfortune that his competitors might have.

Fellow Monster Energy cohort Cameron “PAB” Steele found himself at the back of the pack numerous times in Rounds 9&10 but with winning being the only goal in mind, Steele prevailed through black flags and spin-outs to take on a 4th and 3rd place finish.

“We’re not in the points hunt, so we are forced to qualify with the squirrels at the back of the pack.  It forces me to make space where I can and take every chance I can get.” Steele explained.  “We’re not in it for the points, points are for people who finish races, and you can’t ‘just finish’ when you are racing as hard as we are out there.  We had some fluke mechanical issues take us out early on in the year and the only thing we want to do now is win, nothing else.  Fourth place sucks… check that, fourth place sucks donkey nuts.” Steele went on to add.

The largest field in the Lucas Oil Off Road Racing Series: the Pro Lite Unlimited division, houses three Monster Energy Off-Road Team members all with different strengths and different styles.  One thing is for certain, when the rubber meets the dirt, there’s one common goal and one goal only; WIN!  Monster Energy Off Road Team member and current points leader RJ Anderson along with fellow classmate Casey Currie and Shannon Campbell put on an electrifying show for the sold out crowd at Glen Helen Raceway.  The trio was able to take home three top ten finishes for the weekend while Casey Currie would find his way towards the top of the podium both days finishing in 2nd and 3rd place for the weekend.

“Nobody should have anything for us out there, I know that we have the fastest truck, we just have to stay out of the carnage and we’ll be on top every time.” Currie commented.

Pro 2 Unlimited racing action was some of the best that we have seen all season long in the Lucas Oil Off-Road Racing Series.  Seven time AMA Supercross champion Jeremy “Showtime” McGrath and Freestyle Motocross superhero Jeremy “Twitch” Stenberg held the gas pedal to the floor and wasted no time working their way to the front of the field.  Luck was not on Jeremy “Twitch” Stenberg’s side in Rounds 9 & 10 as he’d finish in the unlucky number 13th position both days.  As if finishing in 13th place both days wasn’t enough, “Twitch” finished Round 9 with a flat rear drivers side tire and was still able to bring it across the checkered flag with three laps remaining.

McGrath would bring home two top ten finishes in Rounds 9&10 and would end the weekend on the podium with a 2nd place victory after a hard fought battle.  McGrath had nothing but speed on his side this weekend, with a deep history at Glen Helen Raceway and his hometown crowd behind him, it was only a matter of time before “Showtime” made his way to the top.

When you give, you’re going to get.  When it comes to the Monster Energy Off-Road Team, you better be ready to “get” what you “gave”.  There is no holding back, the gloves are off and with just 5 rounds remaining in the Lucas Oil Off Road Racing Series it’s time to go for broke.