The Silver State 300 is a 300 mile drag race on dirt. The course consists mainly of winding graded roads that allow racers to exceed speed of 100mph for much of the race with the exception of the notorious Nevada silt beds, which slow racers in blinding explosions of the talcum powder like silt.  The race takes place north of Las Vegas, NV beginning and ending in the remote town of El Alamo. BJ and the rest of the Monster Energy Off-Road team including Mikey Childress and Troy Herbst challenged the field of over 200 racers.

After having a good qualifying run BJ, the defending Best in the Desert overall champion started the Best in the Desert Sliver State 300 in the Number One Monster Energy Trophy Truck in third position behind off-road legend Rob MacCachren and NASCAR racer Robby Gordon. 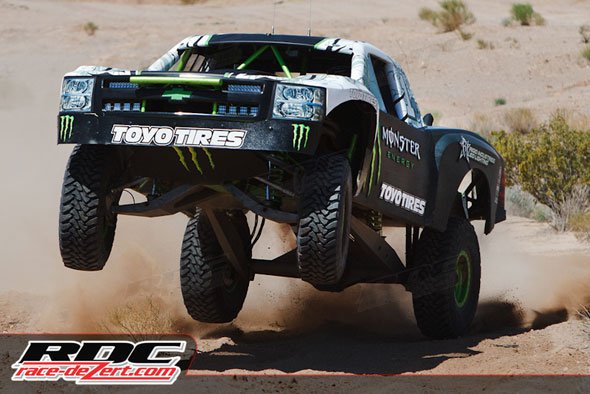 “There was a lot of trash talking online from Robby Gordon prior to the race which made it personal to me. I forgot about the race and I just wanted to beat Robby. I just wanted to catch him and give him my bumper,” stated BJ. “I had a good start. I was right on Rob MacCachren’s tail in his dust when I missed a turn and clipped a tree near race mile 90. I got around MacCachren when he pitted and then got a ghost flat out of nowhere. MacCachren passed us back as we were changing the tire. We got back going and I just hammered down, I was determined to beat Gordon. I had the truck close to 140mph at times. Fifty miles from the finish I lost GPS with all our course notes, again I just decided to gamble and drive as if there were no cautions. I made one mistake and slid out of a corner and took out a section of barbed wire fence just seven miles from the finish. I stayed focused and drove as fast as I could. When we got to the finish we were not sure where we were. I was so stoked to win! It was a really emotional win for me and my team!” 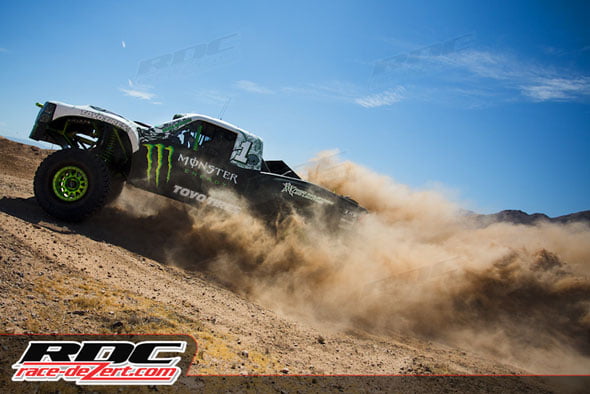 “A wise old off-road racer once told me “In off-road racing it’s not if you have problems, it’s how you deal with them,” and he was right. We just tried to keep our cool and race our race, and it paid off,“ stated BJ.