The 2012 General Tire Mint 400 has come to an end.  Featuring three days of spectacular events leading up to the Great American Off-Road Race, the partnership between creative marketing company Mad Media and Casey Folks’ Best in the Desert Racing Association proved to raise the bar on how an off-road event is to be held.   The storied history of the Mint 400 is steeped in the drama and excitement of Las Vegas, NV.  The Mint 400 has held the title of the toughest, most spectacular off-road race in North America since 1967 when it was first run.  This year was no exception, as 325 race teams went to combat on one of the most brutal battlefields in North America and you better believe the Monster Energy Off-Road Team was in the middle of it all. 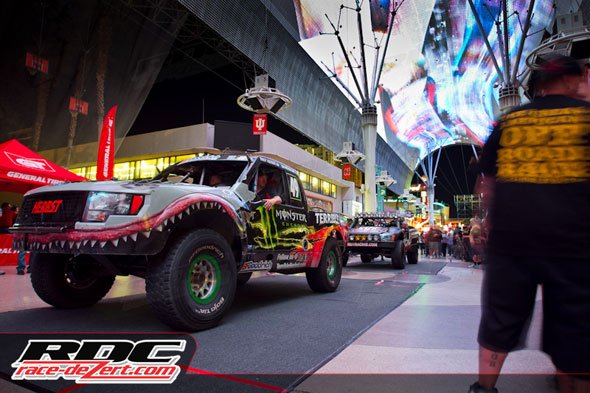 Thursday marked the beginning of race action, as classes 1100, 1400 and 1500 were forced to qualify for their starting positions on race day.  Qualifying took place just north of Las Vegas, leaving the racecourse untouched.  “This is one of the toughest qualifying courses I’ve raced,” said Mikey Childress, who took 9th in Class 1500.  Both Troy Herbst and BJ Baldwin hit the same rock that blew many of the competitors’ tires.  Troy limped in to finish with a time of 05:57:105 and BJ did not finish.  Cameron Steele was the second best Trick Truck across the line, with a time of 04:49:329.  Jerry Zaiden qualified 24th with a time of 05:18:357.

This year’s course had a bit of everything; dry lakebeds, high-speed straight aways, “San Felipe” style whoops, a small rock garden, and a beautiful high elevation Joshua Tree forest that spanned through the mountains.  From a spectating standpoint, one of the biggest downfalls of off-road racing is not being able to witness all of those spectacles.  Casey Folks and the Bureau of Land Management worked together to set up 5 diverse spectator areas for the general public to view 2012’s Mint 400, that drew over 25,000 people. 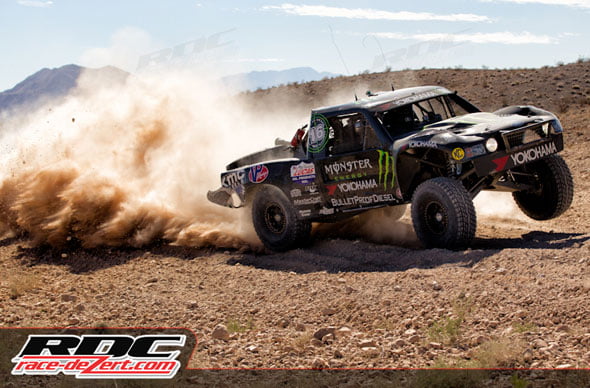 The unlimited race started at 1PM.  Rewarding them for the fastest qualifying lap, Rob MacCachren and Steve Sourapas got to start alone off the line one minute ahead of the competition.  After that, every 30-seconds racers would be paired and it’d be a sprint in to the first turn. Monster Energy’s Cameron Steele was head-to-head with Robby Gordon, who ended up winning the race.  Cameron lost the drag off the line but his plan wasn’t to race with Robby until the second lap.  Cam stayed cool and at a 30-second trailing pace to stay clear of Gordon’s dust.  Twice during the rougher stuff he tried to reel Gordon in and take a shot at passing but he quickly realized it’d be tough, as his hub seal was leaking.  After making it to the main pit, enough of the liquid dripped out to catch on fire.  Cameron’s pit crew fixed the problem, then addressed another issue with the third member differential.  After spending an hour and half in the pits, he went back out behind all the 10’s and 7200’s.  He was able to battle through the dust all the way back to 9th position.  About 26 miles from the finish, he lost the yoke off the rear transmission, ultimately ending his day. 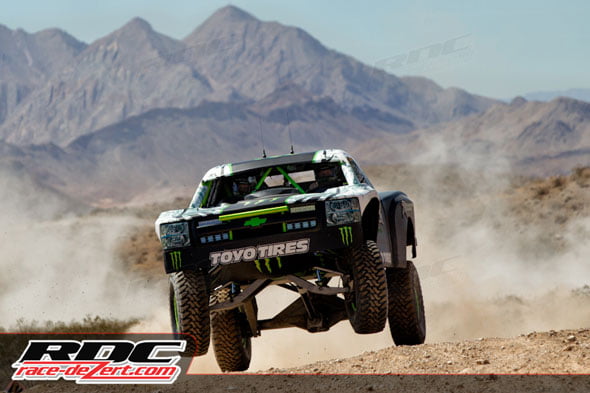 Defending champion “Ballistic” BJ Baldwin started second from last – 67th.  So what did he do?  He passed 51 vehicles in the first lap.  With all the dust and traffic, how is that even possible?  “I had to take a lot of risks and knew that had to change my plan and state of mind to get to the front.  Luckily, being from Las Vegas, I know the area extremely well and I didn’t have a choice,” said Baldwin.  BJ battled the harsh racecourse all day and ran in to his first problem when he got a flat trying to pass Grove Racing in the dust.  This put them back a couple minutes, as they lost time while co-driver Johnny Nelson changed the tire and in the pit.  On the third lap, the throttle got stuck at 60% and basically only used his brake for that stretch.  After blowing a corner due to the stuck throttle, BJ hit a rock that bent the driveline, causing them to drive 65mph till they could fix the problem.  While spending significant time in the pit, BJ wasn’t going to let the Mint beat him.  He was anxious to get back on course and have a respectable finish.  However, on the 4th lap, the team had their first transmission failure in over a year, which at that point, with no way to get to the pit, their day was done. 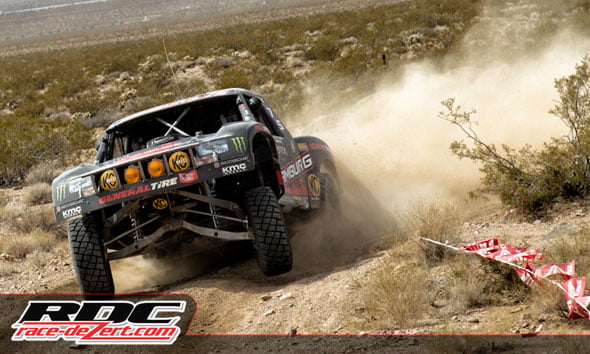 Jerry Zaiden in the Monster Energy Camburg truck got torn apart by the desert as well.   Jerry had a great first lap.  He was on the #18 truck the entire time but coming out of the pit, a buggy pulled right in front of him so he had to fight through the dust for 30 miles.  After punting the buggy, Zaiden was able to catch the #18 truck again but pulled off at the main pit for some inspection.  On the second lap, he was still running in the front pack and passing vehicles left and right.  At mile 50, the truck stopped running.  He still doesn’t know what the problem was but that’s just simply what happened.  The Mint had its way with him and spit him out! 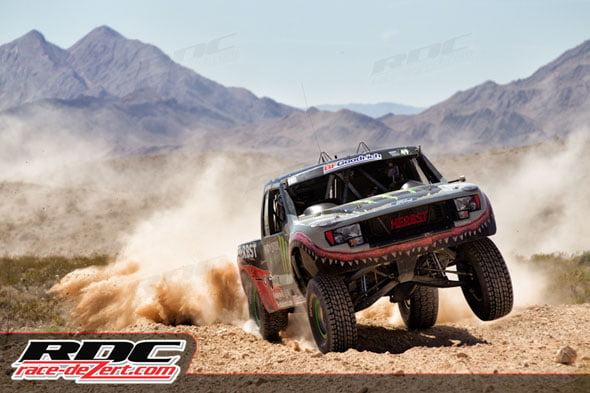 The #49 “Landshark” Trick Truck started 44th off the line.  Tim Herbst took on the first lap and passed 8 Class 1’s off the start line.  He held a good pace and had a dust free lap.   On the second lap, right before pit 1, he got a flat and lost a couple positions.  After finishing out the lap, he handed the truck off to Troy who had a great third lap and continued to make progress on the field.  Towards the end of the last lap, they got center punched and lost about 10 minutes.   Trying to make up time, they had a second flat and managed to finish 9th in Trick Truck.  The Herbst’s were confident because they grew up racing here – the Mint is in their back yard.  The truck ran great, as they had no mechanical issues, but were forced to get creative as they ran in to slower moving vehicles. 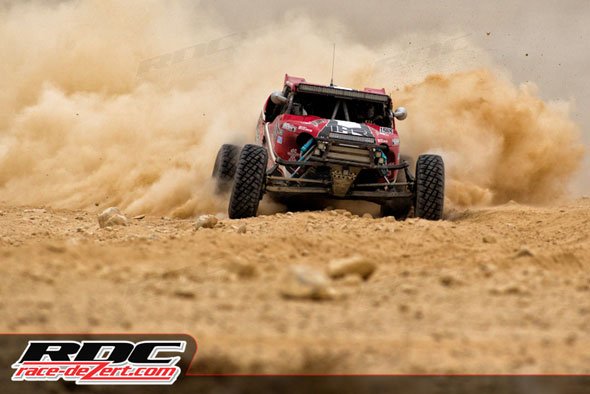 Mikey Childress took 5th in class.  Mikey started side by side with Dale Dondel.  Dale gained position from the start and Mikey chased all day. After lap 2, Dale pulled off to the side broken and Mikey took his new position.  A heated battle between himself, Jake Johnson, and Justin Davis began to brew, as those three traded places consistently using different pit strategies.  Lap 3, Mikey started to push the pace a little and got the car into 2nd behind the truggy of Robby Gordon. At the beginning of lap 4, Mikey lost a power steering belt just three miles in and lost twelve minutes fixing that. After losing three positions, Mikey drove the car to the finish in 5th place.

D
Kilian Hamlin
The MINT 400 was a great time and a great race!!!! congratzs robbie. way to go!!