Monster Energy brought talent from around the globe to Firebird International Raceway in Phoenix for the Lucas Oil Off Road Racing Series (LOOORRS) season finale.  Veteran short course racer Johnny Greaves made the long drive from Wisconsin while X Games gold medalist and rallycross star Liam Doran flew in from England and jumped right in to the fastest class in the series; the 4WD, 800 horsepower Pro4 Unlimited category.  Greaves and Doran joined the usual cast of Monster Energy LOORRS stars that includes Jeremy McGrath, Casey Currie, and Cameron Steele.

Saturday was the last race of the season and championships were on the line in all classes.  In the Pro Lite Unlimited class, Casey Currie and Cameron Steele took different paths in their quest for victory, with Currie’s truck powered by a factory sealed V8 engine and Steele’s sporting a high performance four cylinder.  Unfortunately the results were the same for the duo, as mechanical issues limited Steele to a seventh place finish and varying track conditions forced Currie, who was in second place for much of the race, back to fourth by the end.  When the dust settled Steele had finished third for the season and Currie finished fifth in points. 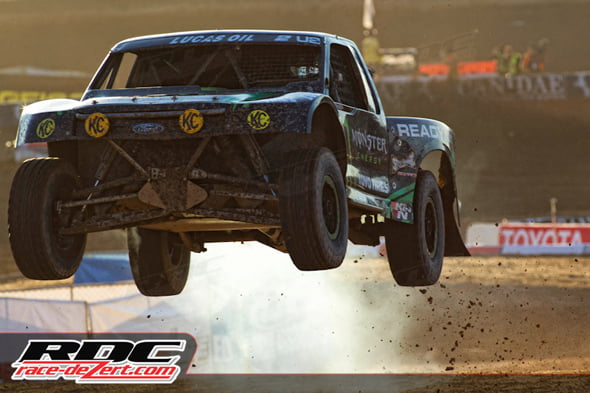 McGrath was coming off a win from the last LOORRS stop in Las Vegas and looking to repeat, but after running under the caution flag half way through the race he was shoved into Carl Renezeder on the first corner of the restart and forced to limp around the track for the remainder.  His injured Monster Energy 2WD truck could not make full use of the 800 horsepower and 35-inch tires and crossed the line in seventh place, putting him in fourth place for the season.  Neither Doran nor Greaves were running for season points in Pro4, so they had nothing to lose by going all out.  Greaves got mixed up in traffic early on and came away with damaged steering, but newcomer Liam Doran banged with Todd LeDuc lap after lap, hanging with the short course veteran right to the checkers to finish in fifth place.  “Short course has huge jumps, trucks sliding sideways, and lots of passing,” Doran commented.    “This is what every kid wants to watch.” 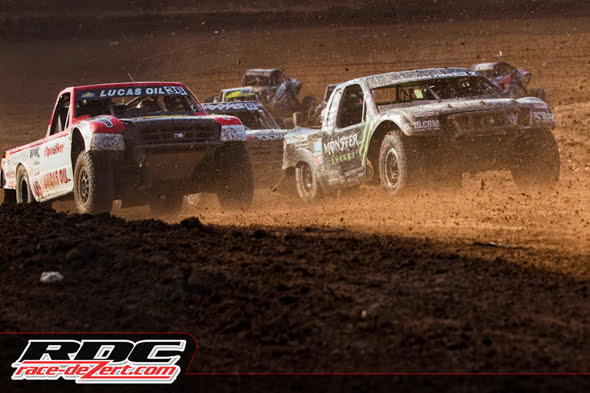 On Sunday the Lord (or at least LOORRS) made cup races, where buggies and trucks, 2WD and 4WD, ran on the track at the same time for five figure paychecks.  Cameron Steele chose to park his Pro Lite Unlimited truck for teammate Brandon Bailey’s Super Buggy, while Currie made suspension adjustments to best the competition.  Steele’s gamble did not pay off, but Currie finished third in a field of 27 drivers despite having zero visibility on the last lap after his hood folded back over the windshield. 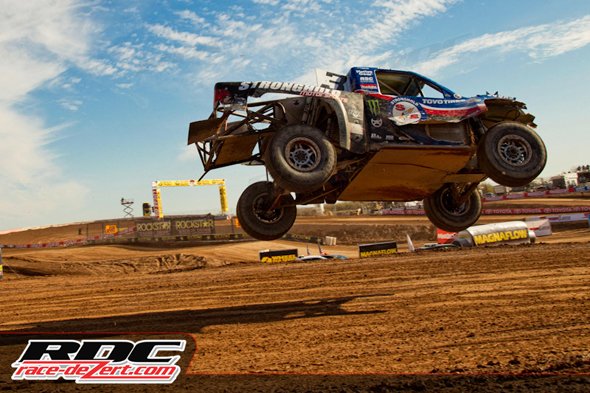 The final race of the year pitted the Pro2 Unlimited trucks against the Pro4 Unlimiteds in the Lucas Oil Challenge Cup, with the faster 4WD trucks forced to start half a lap back.  Liam Doran  started dead last amongst the 25 truck field but weaved his way past half the competitors before his transmission called it quits.  Carnage came quickly and hardly a lap went by without a caution or black flag coming out.  Jeremy McGrath was in second place with two turns to go on the final lap when his Monster Energy truck was clipped from behind by Carl Renezeder and passed by two competitors in a controversial finish.  McGrath had some words with Carl and the officials had Jeremy’s back, DQ’ing Renezeder and awarding McGrath third place for a $7500 paycheck.  “The toughest part is having someone else dictate your race,” McGath commented.  “Third isn’t bad but next time things will go differently.”