The freshly redesigned purpose built track at the Miller Motorsports Complex in Tooele, UT, just outside of Salt Lake City became home to some of the most Intensely wild off-road racing action of the season.  The skies were blue and the stands were full as the Monster Energy Off-Road team fought their way through the wild crashes all the way to the podium.

Current Pro-4 Champion Rick Huseman had an unusually difficult weekend.  After qualifying first on Friday, Rick took charge after the green start flag and moved to the front battling back and forth with Carl Renzeder for the lead until on lap 6 when he broke his front drive shaft, losing all power steering and front wheel drive.  Rick continued to limp his wounded vehicle around in an attempt to finish the race. 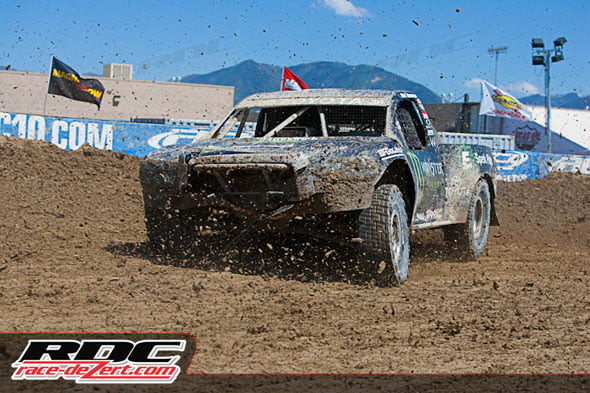 Sunday during qualifying, Rick smashed into Curt Leduc when Curt checked up early for a corner.  Race officials decided to penalize the champ although it was unintentional contact and start him in the back of the pack. Undeterred, Rick came from the back of the pack and sliced through the field up to fourth where he again was stopped due to mechanical issues after he lost a rear wheel bearing and his transfer case gears, halting the number #36 Monster Energy Pro-4.  “I hope we never have a weekend like that again.  I like the view from the front better.” stated the frustrated champion.

In Pro-Lite, both Casey Currie and Cameron Steele battled contact from other racers as well as mechanical issues all weekend.  Steele proved once again that when he has a working truck he will be on the podium.

On Saturday after qualifying 4th Cameron started on the inside of the pole next to Brian Deegan.  The duo battled side by side for the first lap until Cameron made his move passing for the lead.  Cameron led the entire race until in turn four with one lap to go, where Deegan took him out earning a black flag.  Cameron still managed to finish 4th.  Casey Currie who had been running steady the entire race after starting 11th moved up through the field taking advantage of the mayhem on the final lap and stole away first place! 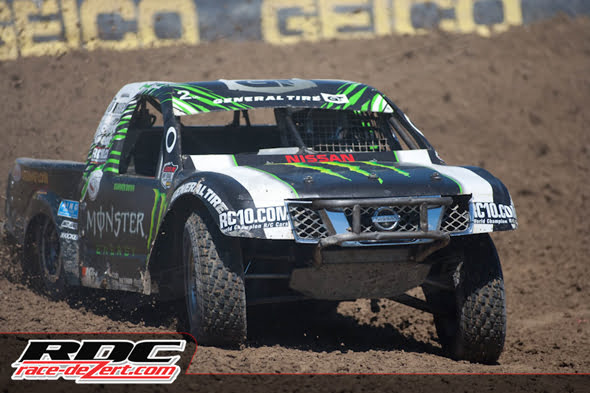 On Sunday, Casey qualified 10th after getting two flats due to the massive ruts forming on the track.  Cameron fared much better qualifying 2nd.  Contact and track conditions would keep the duo from reaching the podium. Cameron managed to finish 5th when he lost his fuel pump after battling in the top three all day and Casey ended up with another flat finishing in the 8th position.  “I feel like I am right there.  The truck feels good now, I am really getting comfortable with it now.” stated Cameron.

Supercross Champion Jeremy McGrath came out swinging for the fences. “I am ready to stand on that podium every race.  That’s where I belong.” stated McGrath.  On Saturday after qualifying 7th, McGrath put on an electrifying performance battling his way to the fourth within the first two laps. McGrath maintained the fourth position until after the mandatory restart when he passed both Robby Woods and Rodrigo Ampudia in corner four to move to 2nd behind Rob Naughton!  McGrath held the second position to the checkered flag. On Sunday McGrath again had trouble qualifying 8th.  “I have always had trouble qualifying.  I need someone to race!  I am trying to get better at qualifying, but I have always had problems with it even when I was racing bikes.  I tend to over think what I am doing.” stated McGrath.  When the green flag dropped McGrath showed his racing prowess and made a charge all the way to 4th by lap two. The position would be short lived though as McGrath spun in turn four (the same corner where he passed two vehicles the previous day.)  The spin put McGrath to the back where he continued to battle back to a 6th place finish.  “It was a tough race. The track was unpredictable; it was either wet and slippery or dry and hard.  I am feeling more comfortable in the truck now. I am looking forward to Glen Helen.”